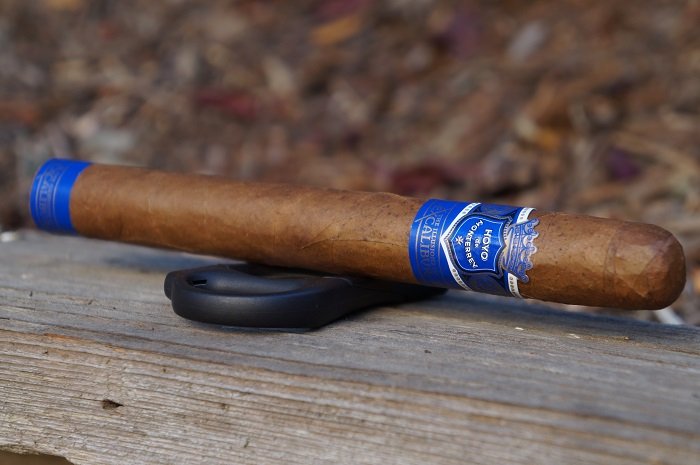 Cigar Details: Hoyo de Monterrey The Illusione of Excalibur No. 1

Aaron: The wrapper on the Hoyo de Monterrey The Illusione of Excalibur No. 1 is light brown, carries some darker freckles on it and has some lightly raised veins. The seams are smooth and the caps very well applied. There are two bands, with the primary being blue, white and gold and having the upper portion being the traditional design for the brand and the lower half denoting the line name. The foot band is blue and gold and is a duplicate of the lower half of the main band. The aroma from the wrapper is an earth forward barnyard while the foot brings shortbread cookie sweetness, tobacco and mild spice. The pre-light draw brings an even mix of well-aged cedar and shortbread cookies along with a mild spiciness on my lips.
Seth: While large, the Hoyo de Monterrey The Illusione of Excalibur No. 1 is a lovely and well constructed cigar. The bands really pop off the darker Colorado wrapper, and the cigar has that classic TABSA marbled brown Nicaraguan Corojo wrapper. Cap is applied well and the cigar has a fine gritty texture. Aromas of earth, barnyard, cocoa, coffee and stone fruit.
John: The Hoyo de Monterrey The Illusione of Excalibur No. 1 comes in cellophane and has a UPC sticker with an integrated tear tab so it remains intact when the cellophane is opened. The cigar has a primary band as well as a foot band. The primary band indicates Hoyo de Monterrey Illusione The Illusione of Excalibur and the foot band indicates the same without Hoyo de Monterrey. Aromas from the cigar include sweet bread, strawberry and wood. From the foot, there was raisin, sweet tobacco and faint wood.
Jiunn: The Hoyo de Monterrey The Illusione of Excalibur No. 1 is a monster of a cigar (both in length and girth). Wrapper looks good, having an oily Colorado to Colorado Maduro wrapper shade. Veins are well pressed, seams tight, bunch and roll even and the cap looks like someone forgot to put it on and at the last minute sloppily did it. Aromas from the wrapper give barnyard, cedar and mixed nuts. Aromas from the foot tell slightly elevated dried red pepper spice and cedar. Cold draw gives hay, cedar and a hint of prunes. 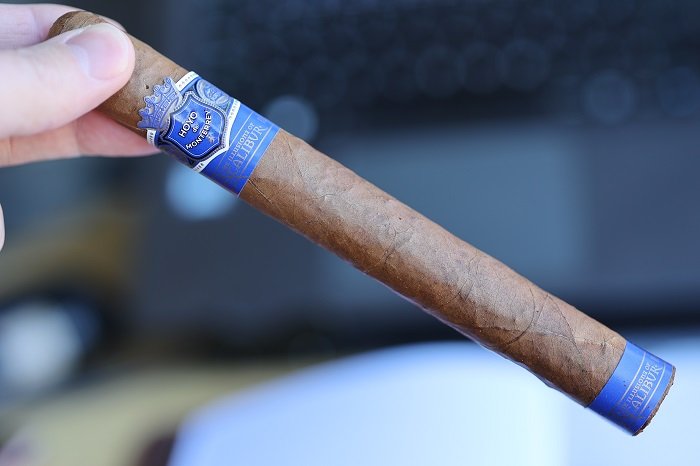 Aaron: The cigar begins with toasted oak and a very mild baking spice. At a quarter inch in, some light earth joins the profile. The retrohale is a mix of toasted oak and dry earth. At an inch and a half in, the earth is now right behind the toasted oak and the baking spice has transitioned to a slightly fuller black pepper. At two inches in, the toasted oak and earth are even up front. As the third comes to a close, the toasted oak and earth are even up front with the black pepper in the middle of the profile and carrying a long finish. The strength was right at medium.
Seth: The first third has a profile that is fairly soft. There are some creamy aspects to the cigar, and they are paired with this earthy quality. Touches of mocha, wood and leather. Sweet spices present as well, with a finish of pepper and wood. Medium in strength and body.
John: Sweet baking spices and wood combine to lead off the first third. Baking spices move up to medium-full after just a few short puffs, and linger into the post draw. Bread mixes with a more defined cedar on the retrohale. Chocolate comes into the retrohale at just under the 20 minute mark. Not long after, bread and a celery vegetal note also join the retrohale. Wood on the post draw lingers long between draws.
Jiunn: The first third tastes like Aganorsa Corojo that is half way there. Plenty of cedar, dried red pepper spice and leather. But what is missing is the sweet bread and ginger snap cookies. In general, the flavors are not very full. Retrohaling gives slightly increased dried red pepper spice and cedar. Finish has a soft lingering cedar and the dried red pepper spice shows up on the rear palate. Strength and body is medium. 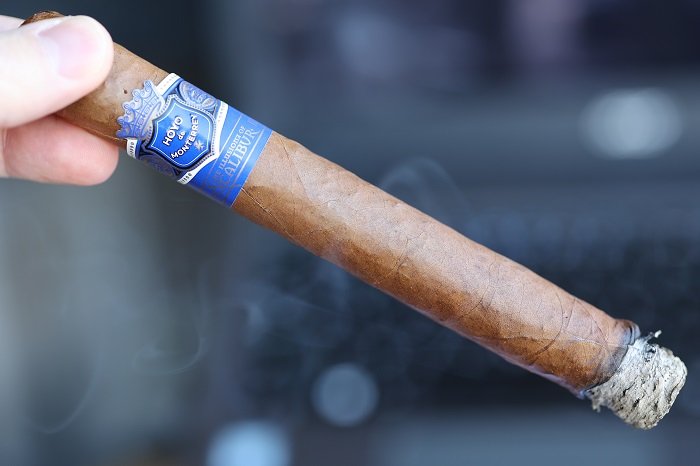 Aaron: As the second third begins, a light mustiness joins the profile. The retrohale is now musty, toasted cedar and dry earth. At an inch and a half in, a light wood bitterness joins the profile. As the third comes to a close, the profile is toasted oak and earth even up front, with black pepper in the middle and light mustiness and wood bitterness in the background. The strength remained at medium.
Seth: The second third is fairly in line with the first third. Creamy, barnyard, earth, mocha, wood and leather. Sweet spices and pepper as well. Medium in strength and body.
John: The second third starts with bread, chocolate and wood. Baking spices are still present, but have fallen in intensity to light-plus, still lingering into the post draw. Sweet wood moves to the front of the profile as it progresses, with baking spices providing an accent note. In the bottom half, the profile is sweet bread and baking spices.
Jiunn: The second third feels monotonous and I’m starting to feel bored. The profile is reduced down to cedar, toned down red pepper spice and mixed nuts, with a lingering leather finish. Strength and body is still medium. 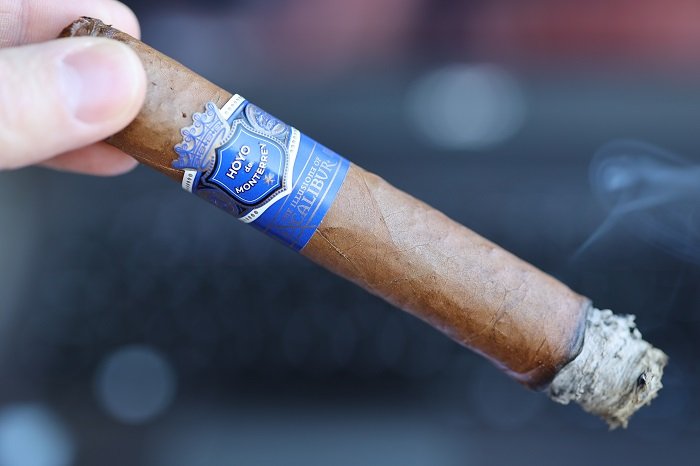 Aaron: As the final third begins, the black pepper mellows a bit. The retrohale is now creamy, toasted oak and dry earth. At an inch in, the black pepper is now very mild. At an inch and a half in, a light vegetal note joins as the cigar begins to warm up. As the cigar wraps up, the profile is toasted oak and earth even up front with black pepper, mustiness, wood bitterness and vegetal note in the background. The strength bumped up to slightly above medium.
Seth: The final third is in line with the first and second, but after such a large cigar it is too little for such a big cigar. Medium in strength and body.
John: Bread and baking spices start the final third with wood and spices combining into the post draw. As the last third settles, the profile is largely driven by dry, tannic wood.
Jiunn: Monotony ensues. The final third is unchanged from the second third. Still red pepper spice mixed with roasted nuts, with a lingering leather finish. Strength and body finishes the same medium. 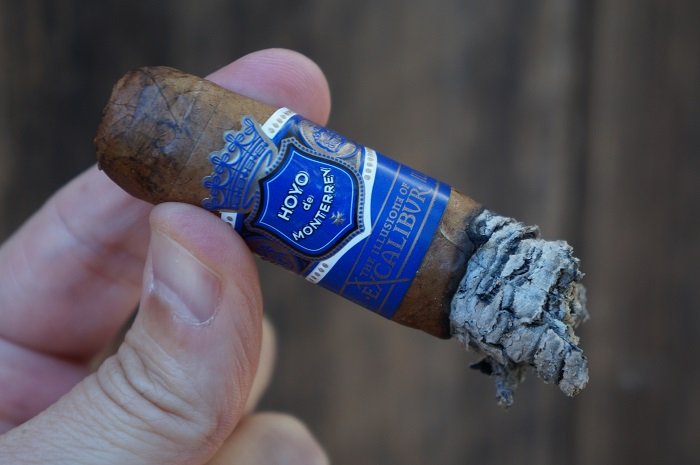 Aaron: The burn was straight throughout and the ash held on in inch and a half increments.
Seth: Burn was good for a TABSA, so you get a very good for that.
John: The burn was straight through the first third, with the ash holding on just over the one inch mark. The burn stalls by the halfway point, requiring a re-light. No intervention was required through the remainder of the smoking experience.
Jiunn: Burn performance was flawless. Even burn, solid ashes, cool burning temperature and ample smoke production. 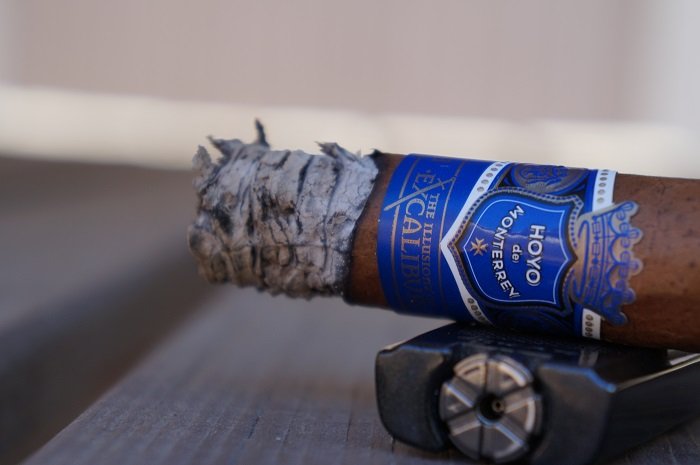 Aaron: The cigar began with toasted oak and a very mild baking spice. Some earth joined fairly quickly. The second third saw a light mustiness join in. The final third saw a light vegetal note join in. Construction was absolutely perfect. The Hoyo de Monterrey The Illusione of Excalibur No. 1 had a fairly average flavor profile focused around toasted oak, earth and black pepper. It was quite linear throughout with just subtle changes. For a cigar of this size, with very little transitioning, you really need to enjoy the flavor profile to find it interesting, and that wasn’t the case for me. It was quite mundane and didn’t do anything to grab my attention. Pair it with the high price point, and this is not a cigar I see myself revisiting.
Seth: This Hoyo de Monterrey The Illusione of Excalibur No. 1 was a lacking blend that was put center stage in this large format cigar. I am not saying the blend would be signficiantly better in a smaller vitola, but it would be more entertaining. Construction and draw was good, which is very important with a cigar this size, but the flavors are too. Average and monotonous from beginning to end. If the blend was better, and this was a good to very good cigar, the price would be jusitified.
John: Going into the review of the Hoyo de Monterrey The Illusione of Excalibur No. 1 was a bit intimidating given it’s large size and ring gauge. Fortunately, the flavor balance found the right point between engaging flavors without being palate fatiguing, which is challenging on a larger cigar. The first third and the second thirds were the most engaging, with the last third being pleasant, but not quite as complex as the rest of the cigar. The burn required a re-light, and the draw was perfect. I would smoke the Hoyo de Monterrey The Illusione of Excalibur No. 1 again, but with a 2 hour and 51 minute smoking time, this one would be reserved for occasions where I would have the necessary time to focus.
Jiunn: It’s daring to release a big cigar that takes a long time to get through. In order to successfully execute it, it needs to grab and hold onto my attention throughout the entire time. Vast majority of them fail. And in the case of the Hoyo de Monterrey The Illusione of Excalibur No. 1, it’s unfortunately another failed attempt. From first draw, the profile is tedious and there was very little transition. This is a pass for me.