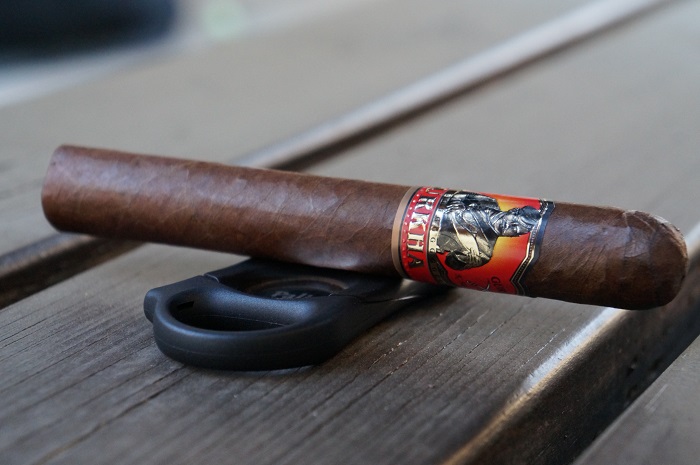 The wrapper is medium brown and has a marbled look to it. There are a couple of raised veins on the back side of the cigar that run from under the cap down to the foot. The seams are hardly visible at all while the head is finished off with a nice triple cap. There is a single band that has the traditional Gurkha design with a reddish-orange background with gold artwork and lettering. The aroma from the wrapper is a mix of damp earth and hay while the foot brings leather, wood and a slight tobacco sweetness. The pre-light draw is wood and sweet tobacco with a significant cinnamon spice present on my lips. 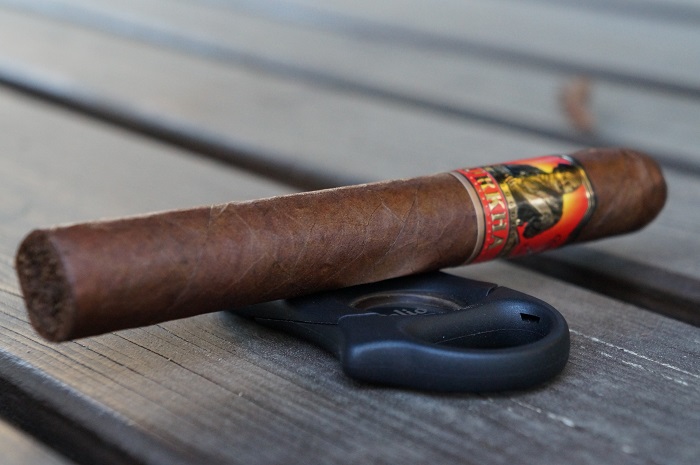 The Gurkha The Master Select has a milk chocolate brown wrapper with flat pressed veins. Nosing the wrapper, I pick up spicy cedar, with faint hints of hay. In the foot I wasn’t able to distinguish any new aromas. 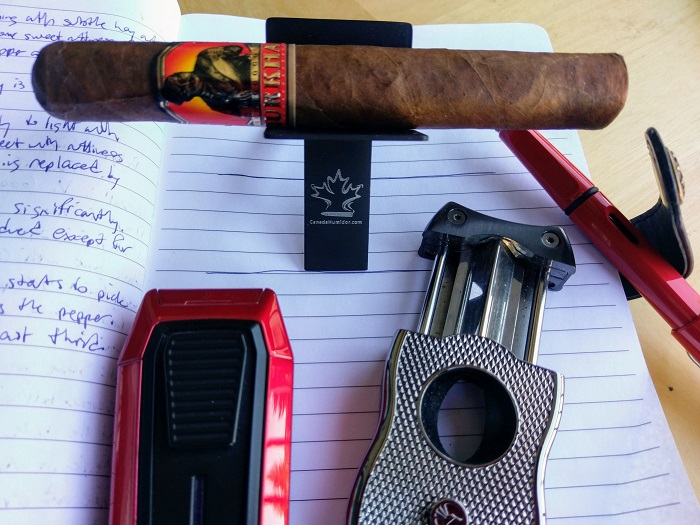 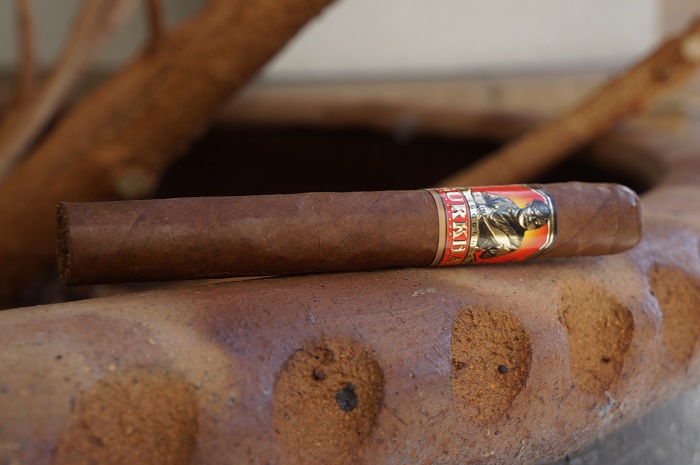 The cigar begins with dark wood and cinnamon. At a half inch in, the cinnamon begins to mellow a bit while the dark wood remains up front. On the retrohale the roles are reversed with the cinnamon up front and the wood in the background. The flavor level is much fuller on the mouth draws. At an inch in, the cinnamon has faded way back as a creamy mustiness has joined in with the wood, now more defined as oak. At an inch and a half, the oak really gets dark again as the creamy mustiness is very light in the background and the cinnamon has left completely. As the third comes to a close, the profile is just a dark and musty oak. The strength in this third was slightly above medium. 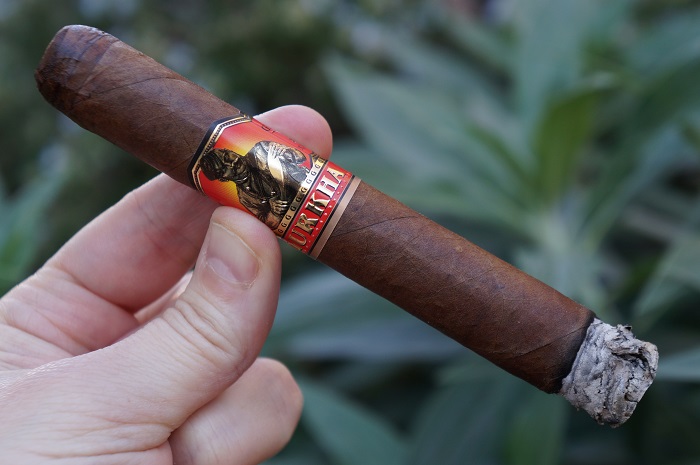 The Master Select initial flavors are sweet cream notes with some slight spice underneath it. The retrohale is a rich nuanced combination of spices and cedar with some balanced pepper on the post draw. As the cigar settles in, some post draw leather starts to evolve, along with coffee and chocolate. Shortly afterwards I’m tasting caramel sweetness on the retrohale, that comes at the end of the profile. The first third continues to evolve with pepper and spice starting to balance against the chocolate and the caramel. I would describe the mouthfeel as very velvety. At the 20 minute mark, I start to get the cedar I initially picked up on the wrapper aroma. 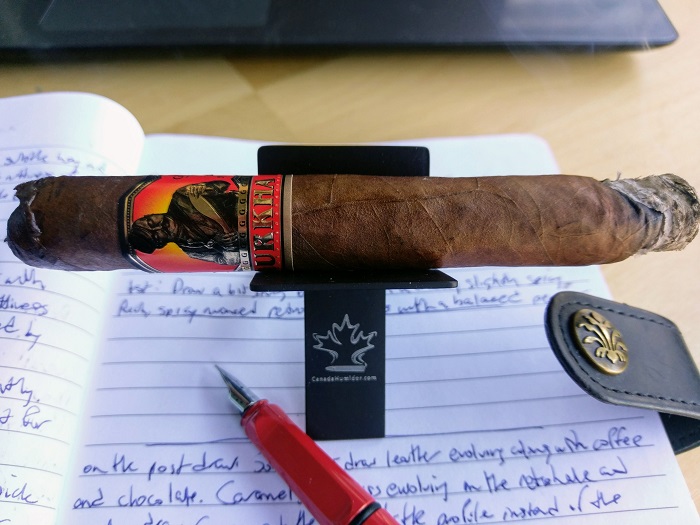 The first third gives a decently wide array of flavors. Mouth draw notes of bread, cream, white pepper, baking spices like minerals and nuts. There is an underlying bitter wood and dry barnyard to the entire profile especially noticed on the finish. Retrohaling heightens both white pepper and baking spices. Strength and body is medium. 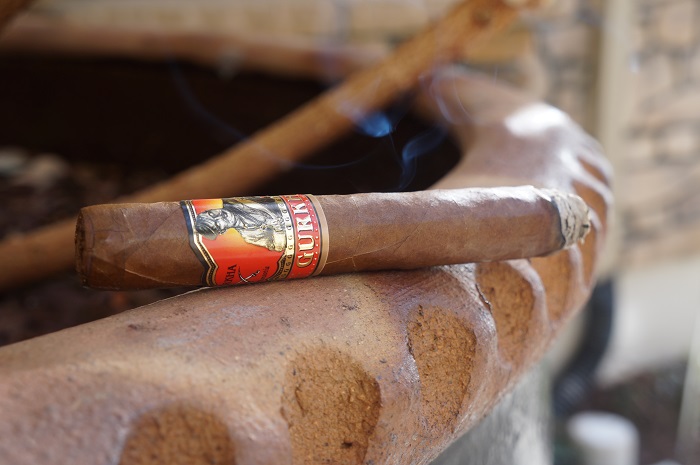 As the second third begins, the dark and musty oak continues to control the profile. At a half inch in, a little cinnamon returns to the profile as the darkness of the oak lightens up a bit. At three quarters of an inch in, some walnut nuttiness joins in with the dark and musty oak and mellow cinnamon. At an inch and a quarter, walnut bitterness joins in with the oak that isn’t as dark while the cinnamon has dropped out again. The retrohale is musty oak. As the third comes to a close, the profile is slightly dark and musty oak with some slightly bitter walnut nuttiness. The strength in this third remained at slightly above medium. 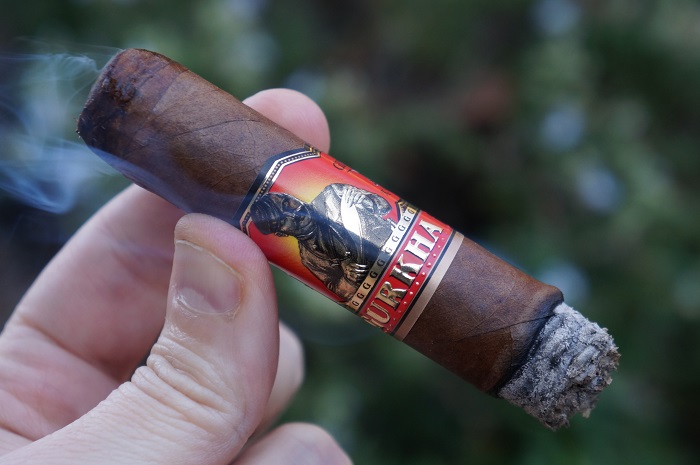 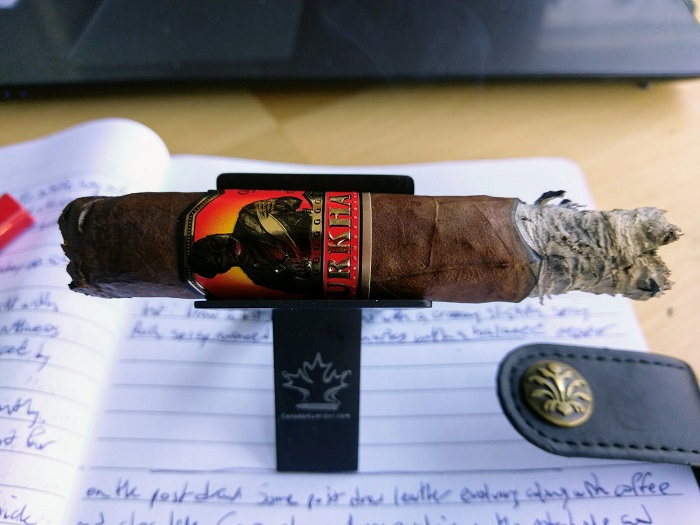 The second third starts off with being white pepper and baking spices heavy. As the cigar progressed, these notes were less aggressive with dry barnyard, bread and nuts being the main notes. The finish however is all about the spices of minerals and white pepper. Strength shows a slight increase while body remains medium. 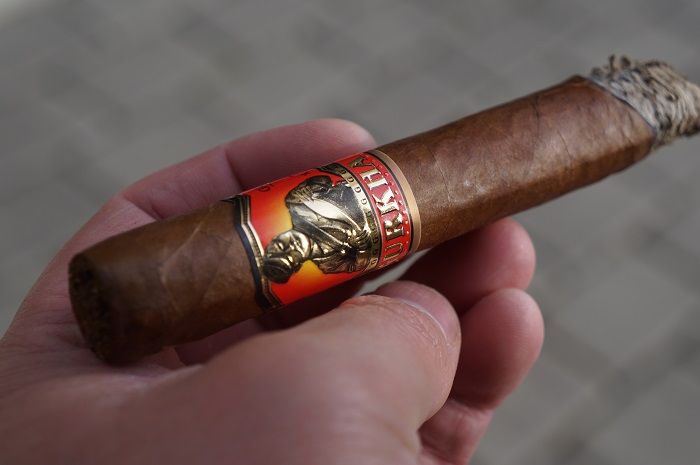 As the final third begins, the bitterness expands out past the nuttiness and is up front with the dark and musty oak with the walnut note in the background. At a half inch in, the bitterness settles down and the oak is up front with some cream and musty components while the walnut note has left the profile. At an inch in, a slight sweetness enters to mix with the creamy and musty oak. This is the profile the cigar finished with. The strength in this third bumped up to medium-full. 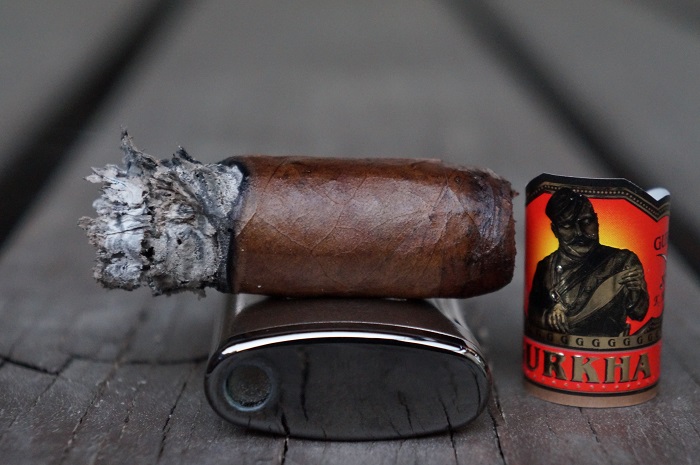 In the last third I get some earthy notes joining the mix. I still taste the rich sweetness, clover and spices on the retrohale, with the cedar being more subdued than the middle third. As the last third establishes itself, a rich cocoa comes back on the regular draw. 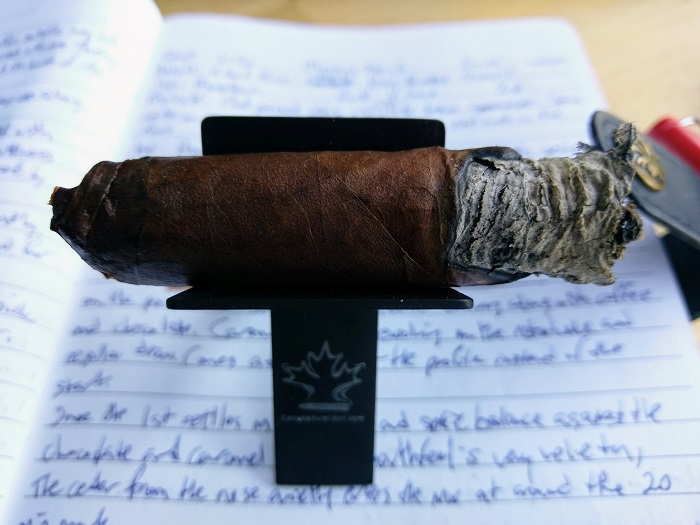 The last third takes a turn for the worse as the profile is back to being a bit too spice dominant (white pepper and baking spices) and at times there is a generic burning paper style of flavors. That generic burning paper note sticks to the finish virtually wiping out the spices and minerals it once gave. Strength finishes a tad above medium and body right at medium. 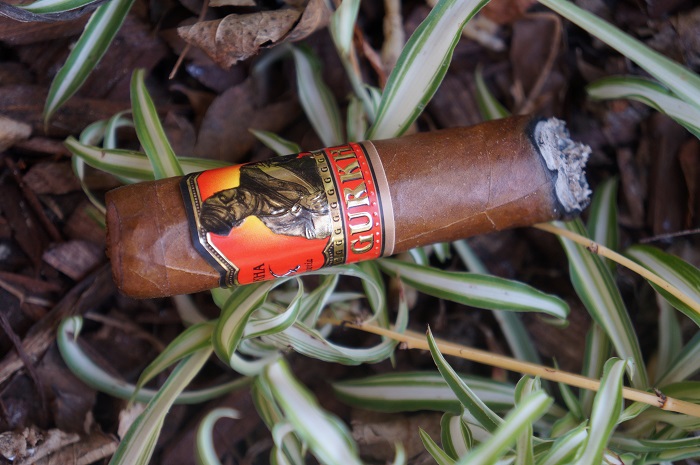 The burn line was slightly wavy throughout. In the final third, the cigar seemed to want to go out, so I had to take frequent draws to keep things going. The ash held on in inch and a half increments. 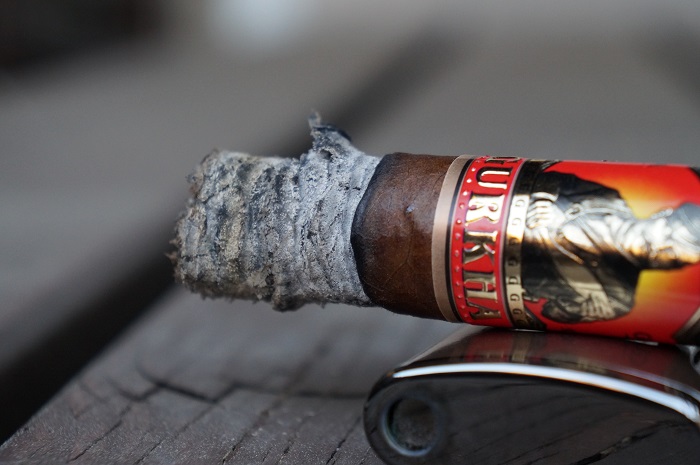 The burn was lopsided at a few points requiring some touch-ups. The ash held on well throughout the smoking experience. 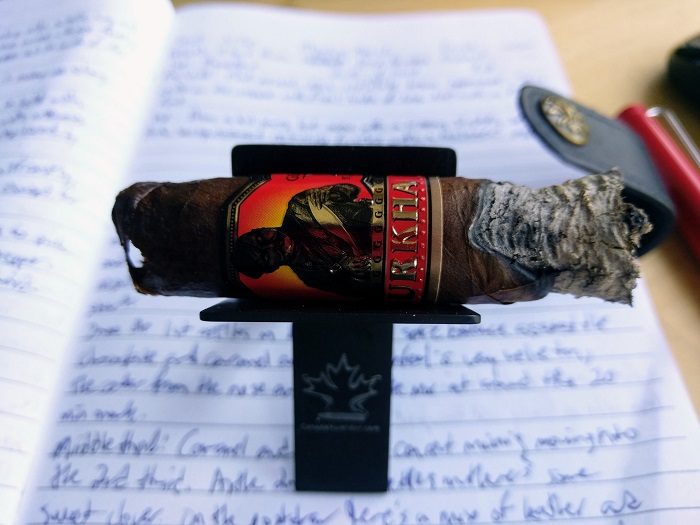 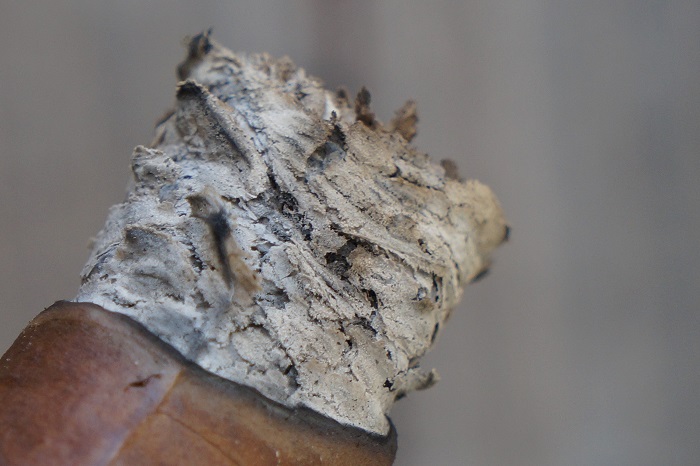 The first cigar I ever bought multiples of was this cigar through one of the auction sites. This latest release of the cigar is better than that one. While the cigar started with a nice combination of oak and cinnamon, that didn’t last much past the first half of the first third. After that, the profile was primarily musty and creamy oak with some walnut nuttiness mixed in. Construction was pretty good but not great. While the price point is fairly attractive, the flavors aren’t ones to really bring me back to this cigar, but I definitely think it’s a step in the right direction to try to bring some people back to the brand from the not so great reputation the brand has for lackluster blends. If the cigar could maintain the wood and cinnamon combination it started with, then it would be right up my alley.

The initial draws were snug, but almost immediately the draw corrected and fell into the ideal zone.

The Gurkha The Master Select already made my top cigar list for 2017, much to the howling and gnashing of teeth from online feedback. This is a very well performing cigar, and the price point makes it something that everyone should try for themselves.

A tad loose for my liking but nonetheless a very good draw.

Gurkha is probably one of the most hated on brands by “craft’ cigar smokers. So when I got to opportunity to smoke one for review, I couldn’t help but to lend a chuckle beforehand. In terms of The Master Select Toro, this was an overall average cigar. The profile bounced around a bit too much either being baking spices and white pepper heavy or creamy and bread heavy. This inconsistency led to a bit of an annoyance as I wanted the cigar to settle down and hit its stride. But that doesn’t mean I won’t smoke other Gurkha’s for review. As a matter of fact, I’d like to find one that I can get in tune with. Unfortunately, it will not be this cigar.