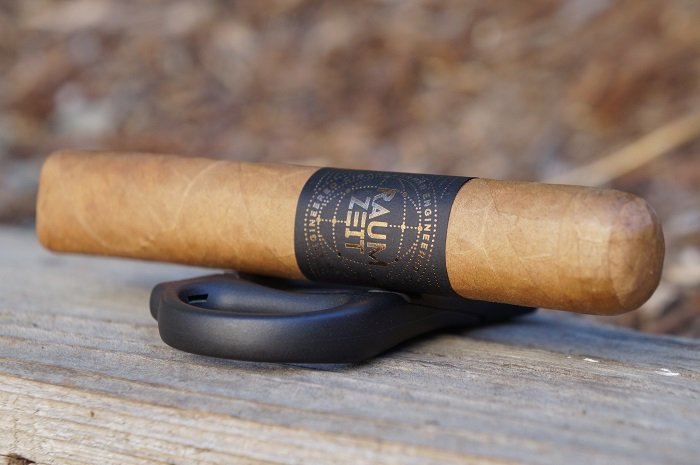 Aaron: The wrapper on the German Engineered Raumzeit Robusto is dark tan and has a network of lightly raised veins present. The seams are a bit raised and the caps well applied. The band is black along with a bronzish metallic color that kind of blends in except when in the right angle with the light. It’s a cool effect. The aroma from the wrapper is a mix of hay and earth while the foot brings musty cedar. The pre-light draw brings cedar and a floral note along with a mild spiciness on my lips.
Seth: I love how the band pops against the wrapper of the cigar. Silky in texture with small to medium sized veins throughout. The German Engineered Raumzeit Robusto has a coloring of light brown with some sandy coloring, and I would classify the cigar as a solid Natural. Aromas of sweet and salty spices with some leather, tobacco and cream.
John: The German Engineered Raumzeit Robusto comes in cellophane and does not have a UPC sticker. The cigar is single banded, with a roughly double wide sized band. For aromas, the wrapper had a combination of sweet bread and faint barnyard. Out of the foot, I was picking up on hay and wood.
Jiunn: The German Engineered Raumzeit Robusto has a Colorado Claro wrapper shade. The shading is even and has a semi-sheen. Veins are well pressed, seams tight, bunch and roll even and head is well wrapped and capped. Aromas from the wrapper tell wonderful barnyard dankness, cheese and toasted nuts. Aromas from the foot give rich cedar and white pepper spice. Cold draws reveal namely hay and a touch of cedar. 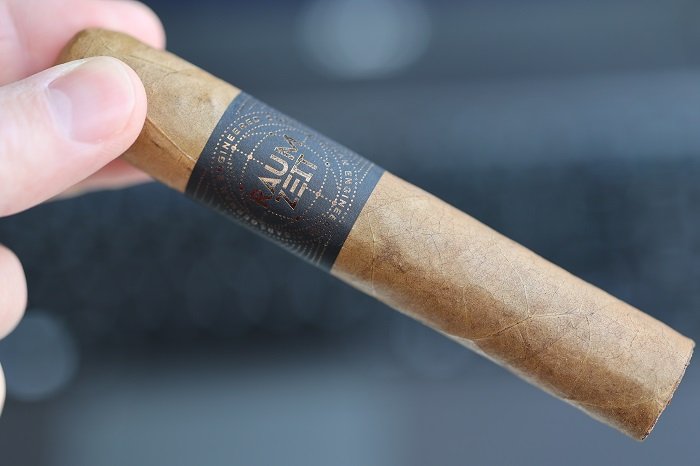 Aaron: The cigar begins with toasted cedar and a robust baking spice. At a quarter inch in, the baking spice mellows and a light creaminess joins. The retrohale is toasted cedar and lightly zingy baking spice. At an inch in, the baking spice picks back up a bit and a light earthiness joins in. At an inch and a quarter, the baking spice transitions to black pepper. As the third comes to a close, the profile is toasted cedar up front with black pepper a bit behind and light amounts of creaminess and earth in the background. The strength was right at medium.
Seth: The first third starts out with this light cedar and hay flavor profile. There are some pronounced grass notes present as well, and the finish has this vegetal pepper spice. Creamy and smooth. Mild to medium in strength and body.
John: My initial flavor impressions are sweet hay and mild wood. Some medium-plus strength spices come through the retrohale after two puffs, and bring with them a musty finish. Wood joins the finish along with some dryness as it settles in. The baking spices calm down to medium-minus strength as it passes the 30 minute mark.
Jiunn: The first third has some of the traditional Connecticut shade elements, such as softness in toasted nuts, sweetness in Hawaiian bread and hay. But there’s also a sharpness in cedar that is drying on the palate. Retrohaling deepens the sharp cedar but also provides a nice cherry note. Finish is all about the sharp dry cedar. Strength and body is medium. 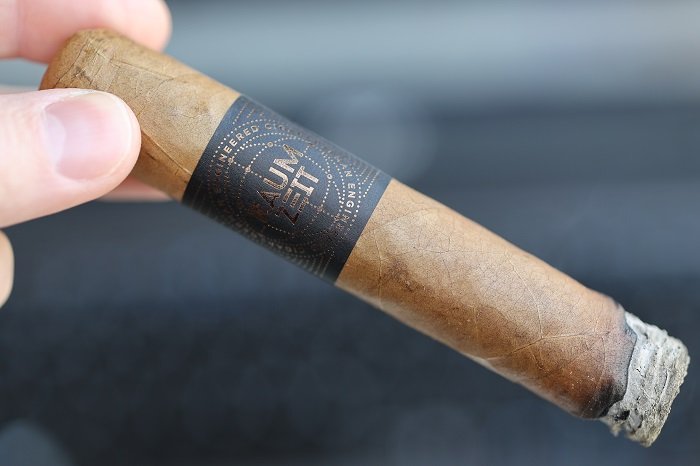 Aaron: As the second third begins, the black pepper mellows a bit. At three quarters of an inch in, the earthiness picks up a bit. The retrohale is now toasted cedar and slightly zingy black pepper. As the third comes to a close, the toasted cedar remains up front with black pepper and earth a bit behind and faint creaminess in the background. The strength remained at medium.
Seth: The second third delivers a lot of the same qualities from the first third. I am picking up strong pepper notes with those cedar, grass and hay profiles. Bits of wood and tobacco present as well, but very light. Mild to medium in strength and body.
John: Baking spices lead off the second third, with mild dry wood and sweetness adding accent flavors. The post draw has a light-plus lingering wood. As the second third settles in, the baking spices start to linger between draws just above medium strength. The post draw wood moves up to medium strength as the second third continues. There is some sharpness to the wood in the bottom half of the second third.
Jiunn: The second third still has the same vibe of having the good elements of Connecticut shade with the unwanted sharpness and dryness in cedar. These notes contradict each other and create quite a bit of unbalance. Strength and body is still medium. 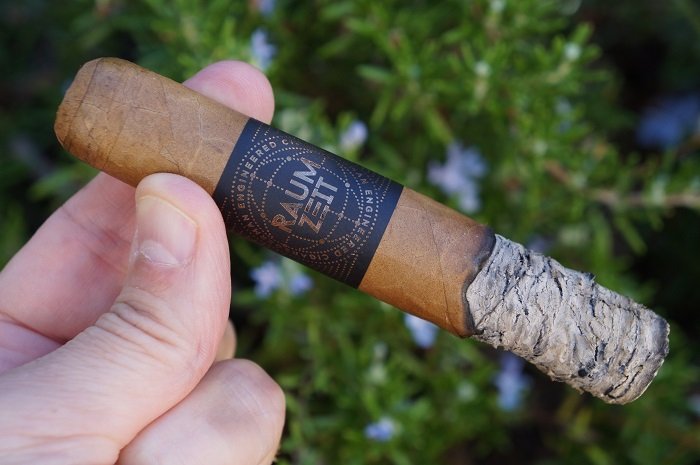 Aaron: As the final third begins, the earth is now right behind the toasted cedar. At a half inch in, the black pepper mellows and the creaminess increases a bit and they are even. The retrohale is now toasted cedar with light amounts of earth and black pepper. At an inch in, the toast level increases. As the cigar wraps up, the heavily toasted cedar is up front with earth right behind and black pepper and creaminess in the background. The strength bumped up to slightly above medium.
Seth: The final third is very similar to what the first and second third were. I am picking up light cedar, hay and grass notes, and there is this finish of tobacco, dry earth, harsh wood and strong pepper notes. Mild to medium in strength and body.
John: Wood leads off as the final third gets going. Hay and wood take up the center of the profile, and the post draw is defined by wood. The hay picks up strength as the last third proceeds, moving to the front of the profile. By the halfway point, hay is the primary flavor driver.
Jiunn: The final third is exactly the same as the first two thirds, some good traditional notes with less desirable notes. The monotony is pretty disengaging. Strength and body finish the same medium. 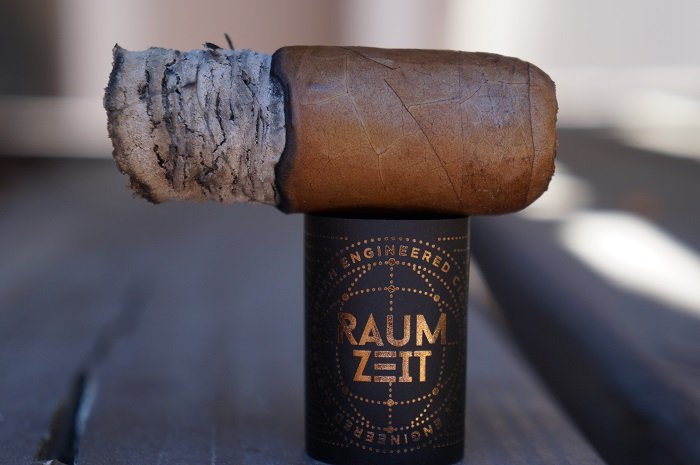 Aaron: The burn was a bit wavy at times, but always self-corrected. The ash held on in inch and a half increments.
Seth: Very good burn throughout.
John: The burn was straight through the first third, mildly uneven in the second third with the burn threatening to stall in the last third. No interventions required. The ash had some flakiness to it through the review.
Jiunn: The “engineering” of the burn was perfect. Even burn, ample smoke production, cool burning temperature and solid ashes. 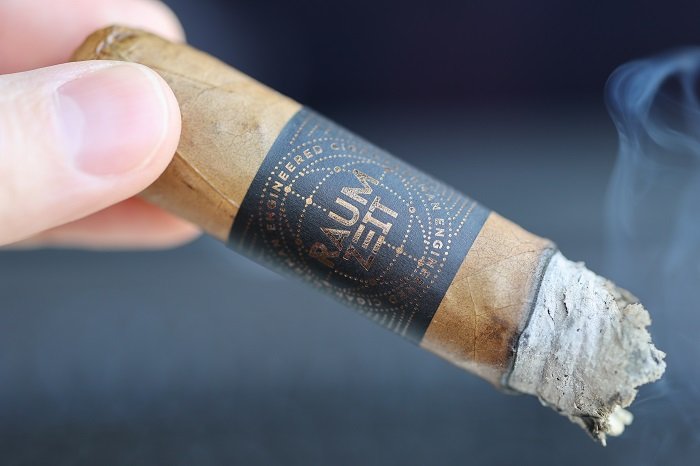 Aaron: The cigar began with toasted cedar and a robust baking spice. A light creaminess joined in fairly quickly and later some earthiness joined and the baking spice transitioned to black pepper. The final third saw the toast level become heavy. The German Engineered Raumzeit Robusto had a nice start with the combination of flavors presented. At about the halfway point, the earthiness increased, knocking the enjoyment level down a bit and maintained that the rest of the way. This is an interesting blend, and while it couldn’t maintain the enjoyment level of the first half, I’d be interested in trying some other vitolas to see how they fare. This is a good step up for the brand and I look forward to future offerings.
Seth: By the final third, I had had enough. The German Engineered Raumzeit Robusto itself was too soft. It was lacking in complexity and depth. The cedar, grass, hay and pepper notes were the only flavors present and they were too sharp. I’m not sure if this is a wrapper problem, or a total blend problem, but no thank you.
John: The German Engineered Raumzeit Robusto started out promising in the first third with a varied medley of flavors that played off each other well. The balance wasn’t as good through the second third, but still pleasant. In the last third, the profile became fairly flat. The burn and draw were both rated amazing. The cigar didn’t do enough for me to actively seek it out, but I would smoke it again if it was available. Total smoking time was 1 hour and 49 minutes.
Jiunn: If we’re talking about the engineering of the burn and draw, the brand nailed this one to perfection. However, cigars are more about the art of blending good tobacco. In that sense, this German Engineered Raumzeit Robusto missed the mark, as there was a dichotomy of simple flavors that led to an unbalanced and boring smoking experience. This one is a pass for me.