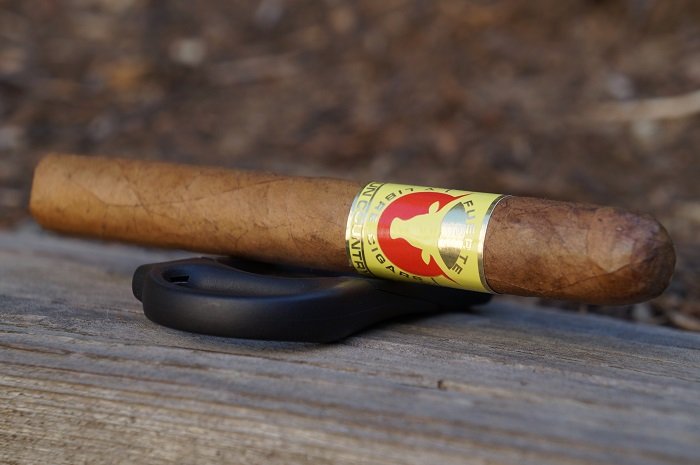 Aaron: The wrapper on the Fuerte y Libre Sun Country Corona is dark tan and has some darker spots and lines on the veins and from the veins below pressing through. The seams are a bit raised while the caps are well applied. The band is pale yellow, gold and red, has an image of a bull head along with the company and line names. The aroma from the wrapper is a mix of cedar and hay while the foot brings slightly sweet wood and a subtle smokiness. The pre-light draw brings an aged and lightly sweet cedar along with a mid-level spiciness on my lips.
Seth: I do not like yellow bands. The Fuerte y Libre Sun Country Corona looks like a larger Cuban Por Larrañaga Petit Coronas with a different band. Aromas of hay, sweet earth, honey and tobacco. Smooth wrapper that’s not oily or silky. Few veins, but those present are medium in size. Firm throughout.
John: The Fuerte y Libre Sun Country Corona comes in cellophane and does not have a UPC sticker. The cigar is single banded, and has aromas from the wrapper of dry wood, faint vegetal components and hay. From the foot, I was smelling sweet tobacco and hay.
Jiunn: The Fuerte y Libre Sun Country Corona has a golden brown Colorado Claro wrapper shade. Veins are well pressed, seams tight, bunch and roll even and head well capped. Aromas from the wrapper tell pungent white pepper spice and less noticeable cedar. Aromas from the foot give the same as the wrapper but with added hay. Cold draws give cedar and hay. 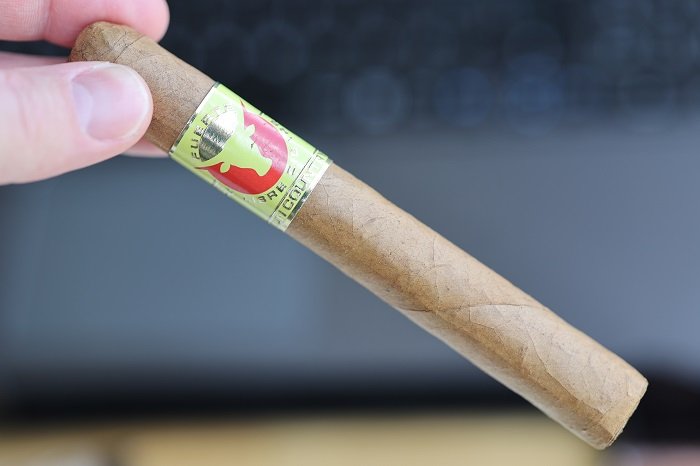 Aaron: The cigar begins with lightly toasted wood and a bold black pepper. At a half inch in, the wood gains a slight staleness. The retrohale has the same profile as the mouth draws, but a bit mellower. At an inch in, a light earthiness joins the profile. At an inch and a quarter, the black pepper has mellowed out a bit and has a slight creaminess to it. As the third comes to a close, the profile is lightly toasted wood up front with slightly creamy black pepper and earth a bit behind. The strength was slightly above medium.
Seth: The first third opens with hay, cedar and pepper notes. There are some lemon citrus qualities present, and faint earth qualities on the finish. Medium in strength and body.
John: The first few puffs combined flavors of dry spices, wood and a creaminess underneath. There was a sweet tobacco that moves into the center of the profile after a few puffs. As the first third moved to the one inch mark, chocolate came through on the retrohale. Baking spices and sweetness harmonize well by the 25 minute mark. In the bottom half of the first third, bread and orange peel come through.
Jiunn: The first third provides a balanced mixture of dry red pepper spice, dry barnyard, cedar wood and leather tannins. Retrohaling deepens both the dry red pepper spice as well as dry barnyard. The finish is medium in length, with cedar and light pepper on the rear palate. Strength and body is medium. 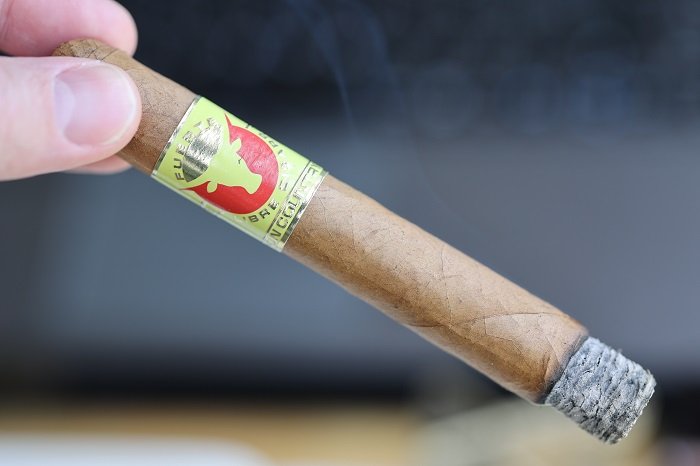 Aaron: As the second third begins, the earth is now even with the toasted wood up front. At a quarter inch in, a light mustiness joins the profile. At a half inch in, the toast level picks up while the black pepper is pretty mellow now, but does have a long finish. The retrohale is toasted wood and dry earth with mild black pepper. As the third comes to a close, the profile is toasted wood and dry earth even up front with black pepper and mustiness in the background. The strength remains at slightly above medium.
Seth: The second third shows a continuation of the first third and I am picking up cedar, citrus, hay and pepper notes. Bits of earth on the finish. Like before, medium in strength and body.
John: Sweet baking spices lead off, as dry hay finishes into the post draw. Some mild, dry wood comes through on the post draw as it settles in. As the second third continues, baking spices start to linger into the post draw at light-plus strength. Cinnamon becomes more defined on the retrohale moving towards the halfway point.
Jiunn: The second third shows natural sweetness, which adds another layer to the pepper, barnyard and earthy notes. The finish also picks up more pepper on the back palate. Strength is reaching towards medium-full and body stays medium. 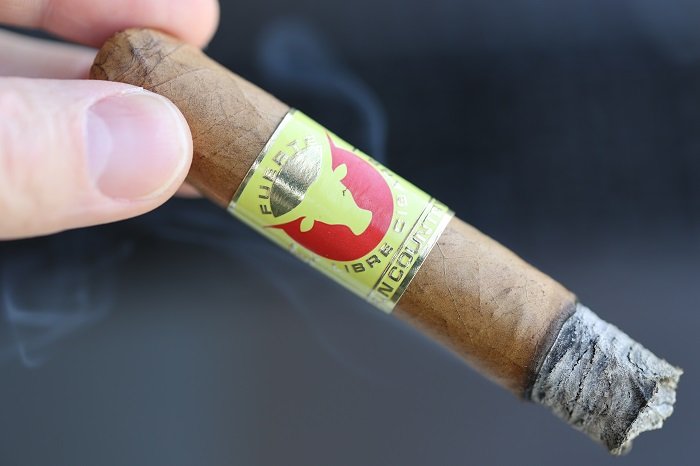 Aaron: As the final third begins, the toast level picks up a bit more. The retrohale remains toasted wood and dry earth with mild black pepper. At an inch in, the cigar warms up and brings a vegetal note to the profile. As the cigar wraps up, the profile is heavily toasted wood and dry earth up front with a vegetal note in the middle and black pepper in the background. The strength bumped up to medium-full.
Seth: The final third was right in line with the second. Again, medium in strength and body as well.
John: Baking spices mix with sweetness, as mild spice combines with wood into the post draw. Some mild mustiness is present in the center of the retrohale, but it is pushed down by the baking spices. Some mild espresso comes through on the retrohale not longer after. Bitterness developes moving towards the halfway point.
Jiunn: The final third is getting a bit too leather tannin forward for my liking. This change dulls the natural sweetness and barnyard notes the most. Strength and body is still overall medium. 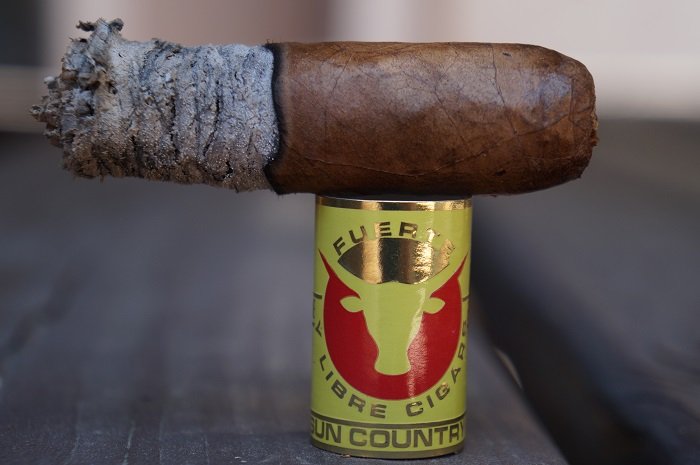 Aaron: The burn line was straight throughout, but the cigar did go out without warning once in the second third. The ash held on in inch and a half increments.
Seth: Lovely burn throughout.
John: The burn was razor sharp, with an ash that held on in two inch increments.
Jiunn: Great burn. Tight ashes, even burn, cool burning temperature and ample smoke production. 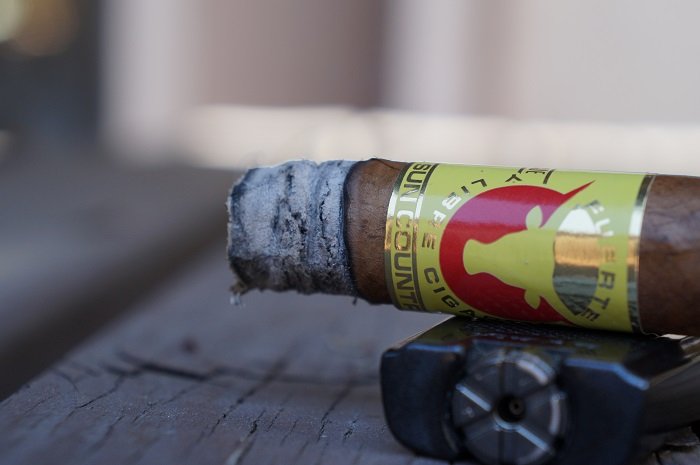 Aaron: The draw was perfect, with just the right amount of resistance that I prefer.
Seth: Very nice draw.
John: The draw was at most a 1/2 notch into the open spectrum which puts it in the range for an ideal draw.
Jiunn: Flawless draw, striking the ideal balance between air flow and resistance.

Aaron: The cigar began with lightly toasted wood and a bold black pepper. Some earth joined a bit later and the pepper gained a light creaminess. The second third saw some mustiness join in. The final third saw the cigar heat up and gain a vegetal note. The Fuerte y Libre Sun Country Corona had an average, fairly simple flavor profile throughout. It needed something else to help elevate things like some sweetness to break up the wood and dry earth dominance. This is my first time trying a cigar from the brand, and while I wouldn’t see myself coming back to this one, I would be interested in trying some of their other offerings.
Seth: I can’t believe this cigar was released in 2022. It really seems like a bundle cigar from 10 years ago. Packaging as well. Not bad, very approachable, but nothing much going on. Inexpensive cigar. I would smoke it if handed to me, and smoke at an event.
John: The Fuerte y Libre Sun Country Corona delivered nuanced flavors that accented each other well, and carried that through into the second third, keeping me engaged through the review. The last third was still pleasant, but not quite at the same complexity as the previous thirds. Both the draw and burn were perfect. This cigar impressed, I’d happily smoke it again and seek it out. Total smoking time was 1 hour and 32 minutes.
Jiunn: Being a cigar reviewer, I love experiences like this. An experience in which I don’t know anything about the brand, the blender, the cigar factory. I love it even more when the experience turns out great, like in the case of the Fuerte y Libre Sun Country Corona. This was a great Connecticut shade giving full flavors of all the major spectrums without being overly bitter. Nice!