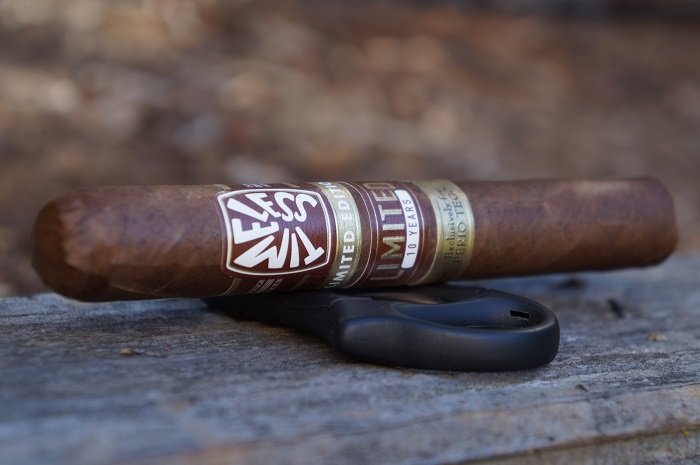 Aaron: The wrapper on the Ferio Tego Timeless Ten Years is light brown with some darker marbling and has some raised veins as well as some protruding from the binder. The seams are smooth and the caps very well applied. There are three bands, with the first two in a brown, white and gold color combination. The primary denotes the brand while the secondary denotes the Anniversary. The third band is gold and black and is the standard band used to denote the company. The aroma from the wrapper is a light mix of cedar and earth while the foot brings cedar, wheat bread and a light anise. The pre-light draw brings cedar, stone fruit sweetness and light anise.
Seth: Nice Colorado wrapper against some classic looking bands. Lovely brown and gold coloring. The wrapper has few veins throughout, and those present are smaller in size. The Ferio Tego Timeless Ten Years is firm in hand. Aromas of rich earth, leather, wood and sweet spices.
John: The Ferio Tego Timeless Ten Years comes in cellophane and has a UPC sticker on the main body of the cellophane to remain intact when opened. The cigar is triple banded, with the bands applied together to look like one larger band. The primary band indicates ‘Timeless Limited Edition’, the secondary band indicates ‘Limited 10 Years’ and the third band indicates ‘Exclusively for FERIO TEGO’. Aromas from the wrapper included vegetation and cedar. From the foot, a combination of bread, sweet tobacco and mild mustiness.
Jiunn: The Ferio Tego Timeless Ten Years has a Colorado wrapper shade. The wrapper is of high quality, showing nice traces of oils. Veins are well pressed, seams tight, bunch and roll even and the head is well wrapped and capped. Aromas from the wrapper tell a mixture of manure and cardboard paper. Foot aroma tells cedar and accented dried red pepper spice. Cold draw provides savory and sweet salted roasted mixed nuts. 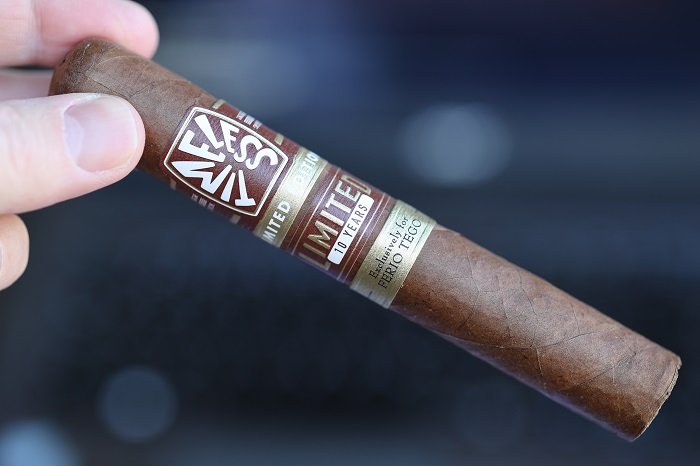 Aaron: The cigar begins with toasted cedar, mushroom mustiness and earth. At a half inch in, the earth has mellowed a bit. The retrohale is toasted cedar followed by mushroom mustiness. At an inch and a quarter, a light black pepper joins in. As the third comes to a close, the toasted cedar is up front with mushroom mustiness and earth in the middle with black pepper in the background. The strength was slightly below medium.
Seth: The first third starts out with some nice damp wood and tobacco notes. Bits of coffee beans with nuts as well. Earth and spices present on the finish. Leather and creamy as well. Medium in strength and body.
John: Sweet wood is the initial flavor impression here, with nuttiness chasing it and wood carrying the cigar into the post draw. Creamy wood is present through the retrohale. As the cigar progresses, some medium spices start to push into the retrohale as well. As the first third settles, musty wood takes up the center of the profile. By the bottom half, chocolate has joined the retrohale.
Jiunn: There’s an airiness to the flavors. Not a bad thing though. Fairly well melded flavors of dry biscuits, cedar, leather and red pepper spice. Retrohaling increases the pepper spice and biscuits, as well as adds a roasted coffee note. The finish is on the shorter end, being driven by cedar. Strength and body is medium. 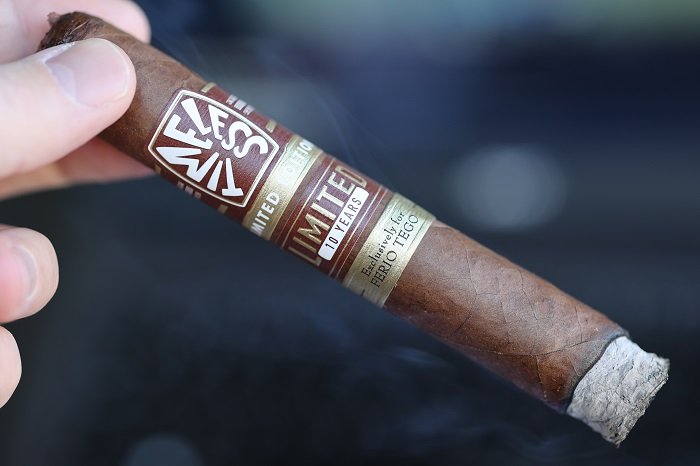 Aaron: As the second third begins, the earth picks up a bit, now being slightly ahead of the mushroom mustiness. At three quarters of an inch in, a faint floral note becomes present. The retrohale is toasted cedar and earth with light mushroom mustiness and floral notes. As the third comes to a close, the profile is toasted cedar, then earth, then mushroom mustiness with black pepper and floral notes in the background. The strength remained at slightly below medium.
Seth: The second third delivers a profile of cocoa, cream, nuts, earth and leather. Some changes from the first third. Sweet spices and wood present as well. Medium in strength and body. Very balanced.
John: Chocolate and bread lead off with a tasty combination, as wood finishes into the post draw. The flavors remain largely unchanged until the halfway point, where medium strength baking spices push into the retrohale. Those baking spices come down in strength in the bottom half, with all the flavor components balancing in intensity.
Jiunn: The second third’s flavor profile transitions to showing more red pepper spice and leather. Along with the leather, associated tannins follows. The tannins are well structured and do not create a heavy palate. Strength and body remains medium. 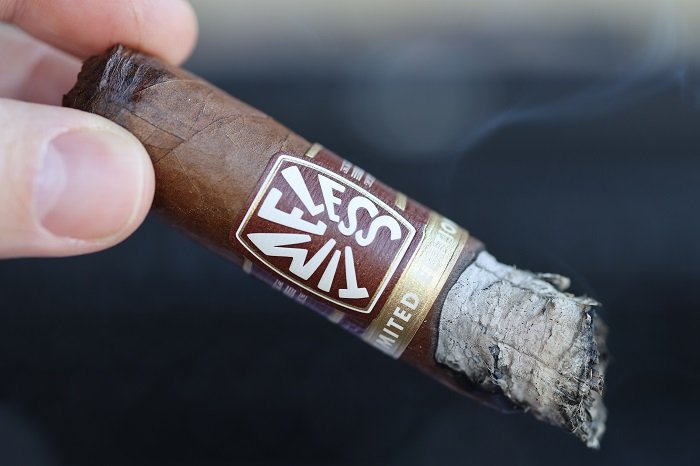 Aaron: As the final third begins, the floral note has departed and the toast level has increased. At a half inch in, the toasted cedar and earth are now even up front and the mustiness has lost the mushroom note. The retrohale is toasted cedar and earth along with some mustiness. At an inch and a quarter in, the cigar begins to warm up and a light vegetal note joins in. As the cigar wraps up, the profile is toasted cedar and earth up front, with mustiness in the middle and black pepper and vegetal note in the background. The strength bumped up to medium.
Seth: The final third delivers a creamy and coffee profile. Nuts present as well with some cocoa and earth. Wood and leather as well, with a finish of sweet spices. Like the first two thirds, medium in strength and body.
John: Toasted wood leads off here. Earth and wood are present through the post draw, with the earth slightly more intense at medium strength. Some nuttiness and wood combines into the center as it progresses. Some dryness develops on my palate as the last third settles. By the bottom half, earth is driving the profile. That earth rescinds and becomes more balanced against the wood as it continues.
Jiunn: The final third is the same as the second third. Still leather tannins and red pepper spice forward, lacking the depth and complexities from the first third. Strength and body finish the same medium. 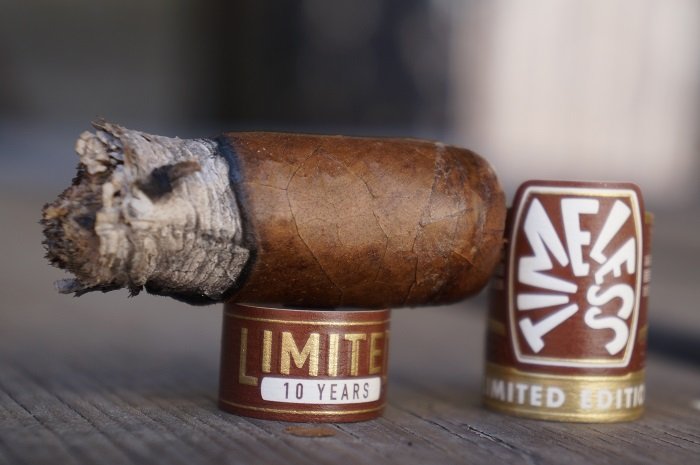 Aaron: The burn was a bit wavy at times, but never needed any attention. The ash held on through each third.
Seth: Good burn throughout. Not pretty or great, but good.
John: The burn started straight, and I could feel the cigar start to stall, so I increased my puffing frequency. Despite that, the cigar went out halfway through the first third, requiring a re-light. The burn stalled again, going out halfway through the second third, requiring another re-light.
Jiunn: The the burn was perfect. Even burn, ample smoke production, cool burning temperature and solid ashes. 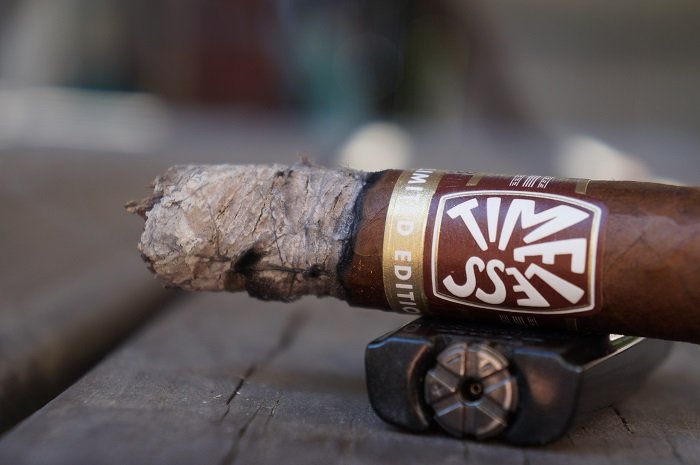 Aaron: The cigar began with toasted cedar, mushroom mustiness and earth. Some black pepper joined a bit later. The second third saw a floral note join in. The final third saw the floral note depart and a vegetal note join in about halfway, as the cigar warmed up. The Ferio Tego Timeless Ten Years had a pleasant profile through the first two thirds, focused around toasted cedar, earth and mushroom mustiness. The final third dropped a level as the floral note dropped out and the focus was around an increased toasted cedar and earth combination. This is a nice anniversary celebration for the Timeless line, and while the price point is up there, it provides an enhanced experience that may deserve it. I’d be up for smoking this again.
Seth: I really enjoyed the Ferio Tego Timeless Ten Years, and I thought the cigar was balanced while producing lovely flavors. Burn was not great, but that was not an issue. Yes, it would help with the score, but that does not deter me from smoking more. Price might, but not the burn. Again, good transitioning and complexity throughout. Nice depth. Good blend for the company.
John: The Ferio Tego Timeless Ten Years played around in the lighter end of the spectrum and just a toe over the medium end of the spectrum at various points through the review. The first and second thirds were enjoyable and engaging, with the last third lacking much of that complexity. The burn suffered, with two re-lights through the review, while the draw was perfect. I enjoyed the Timeless Ten Years and would smoke it again. I do wonder how well it would perform if it had a flawless burn. Total smoking time was 2 hours and 12 minutes.
Jiunn: I find the Ferio Tego Timeless Ten Years to be overall an average flavor profile. While the first third did the best job of giving a cohesive profile, the latter two thirds showed a bit too much pepper spice and leather tannins. I would pass on this cigar and just stick with the regular production Timeless.