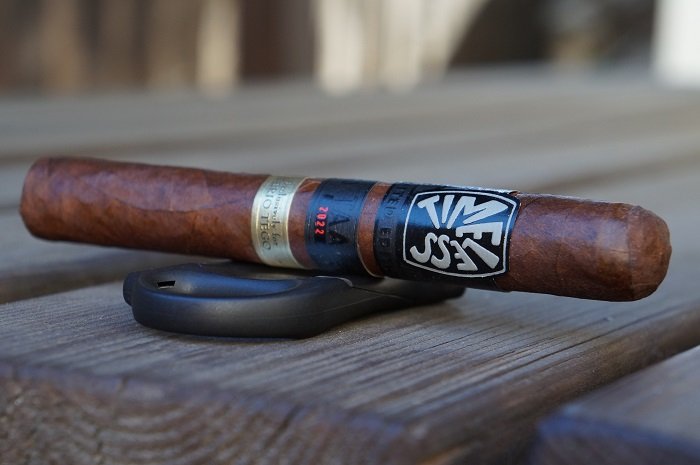 Aaron: The wrapper on the Ferio Tego Timeless TAA 2022 is slightly darker than medium brown and has some lightly raised veins present. The seams are a bit raised while the caps are well applied. There are three bands, with the primary having the brand name in gray and the rest of the band various shades of black. The secondary band denotes TAA and LE in various shades of black but has the year is red. The third band is gold and black and is the band that is used on the company’s cigars that designates the company name. The aroma from the wrapper is a light mix of earth and cocoa while the foot brings cedar and anise. The pre-light draw brings sweet cedar along with a mild spiciness on my lips.
Seth: Great marble coloring with the Colorado wrapper. The Ferio Tego Timeless TAA 2022 has this nice rich clay coloring. Medium sized veins scattered throughout with a texture that is smooth throughout. Nicely applied cap. Firm in hand. Aromas of coffee, spices, strong tobacco and rich earth.
John: The Ferio Tego Timeless TAA 2022 delivers a premium pre-light experience here. The cigar is cellophaned, and the UPC sticker is placed on the body of the cellophane so it can be opened without issue. The cigar is also triple banded, the secondary band indicates ‘TAA 2022’, and a third band indicates ‘Exclusively for Ferio Tego’. Aromas from the wrapper includes barnyard, aged wood and leather. Some sweet tobacco and leather are present from the foot.
Jiunn: The Ferio Tego Timeless TAA 2022 has three bands on the cigar. This obviously means it is a baller cigar. Wrapper color variation is Colorado Maduro, with good oil content. Veins are well pressed, seams tight, bunch and roll even and head well wrapped and capped. Aromas from the wrapper give rich nuts and a hint of white pepper spice. Aromas from the foot tell the same but intensified. Cold draws reveal hay and mixed nuts. 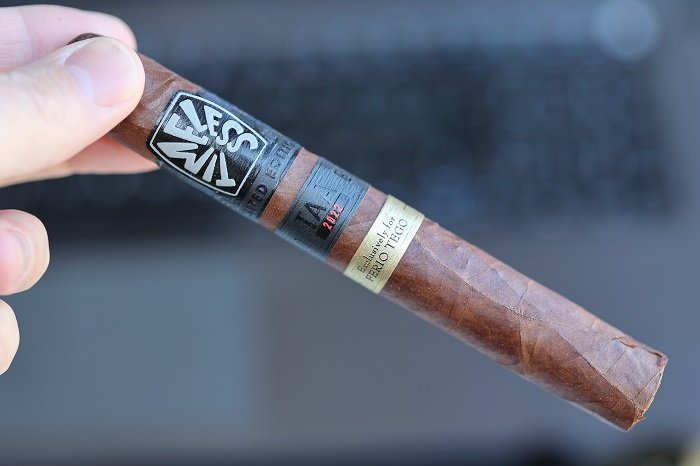 Aaron: The cigar begins with oak, dark earth and bold baking spice. At a third of an inch in, the baking spice has transitioned to black pepper and is just as bold. At three quarters of an inch in, a faint cocoa note joins in. The retrohale is oak, dark earth and a mildly zingy black pepper. At an inch and a quarter, the black pepper has mellowed a fair amount. As the third comes to a close, the profile is oak and dark earth up front with black pepper a bit behind and light cocoa in the background. The strength in this third was medium-full.
Seth: The first third opens with some graham cracker qualities that are paired with a sweet peppery spice. I am picking up some cocoa and earth qualities, with bits of leather and tobacco as well. Cinnamon and coffee beans too. Medium-full in strength and body. Nice start that grabs my attention.
John: The first few puffs are flavors of sweet leather and wood. Some baking spices develop after a few more puffs at medium-plus intensity. Some pepper comes into the post draw and sits on the front of my tongue. As the first third continues to develop, chocolate and espresso are present underneath leather on the retrohale. By the 15 minute mark, the intensity of the spices have calmed down to medium strength. The cigar continues to evolve with the spices ramping back up in strength. By the bottom half of the first third, all the flavors have found a nice equilibrium for strength.
Jiunn: There’s a surprising dry red pepper spice kick upfront that is mouth coating and especially rear palate dominant. After about an inch, the pepper does taper down, creating a more harmonious blend of more mannered dry red pepper spice, creamy roasted nuts and charred cedar. Retrohaling gives intense dry red pepper spice that goes all the way from the nostrils to my head. However, it also is much more nutty. The finish is short with layered cedar. Strength is medium-full and body is medium. 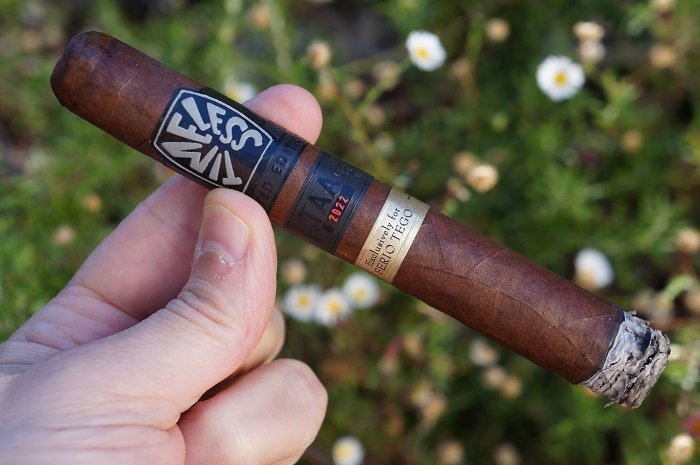 Aaron: As the second third begins, the black pepper mellows a bit more. At a half inch in, the oak gains a light toast as the light cocoa note has departed. The retrohale is now toasted oak and earthiness. At an inch and a quarter, the earthiness is becoming a bit dry. As the third comes to a close, the profile is toasted oak and dry earth up front with black pepper a bit behind. The strength dropped down to slightly above medium.
Seth: The second third was in line with the first. Lots of cocoa, leather and wood notes in this third. Bits of sweet spices and pepper present as well. Coffee notes with tobacco on the finish. Medium in strength and body.
John: The second third gets going with baking spices at medium-full, a sweet bread center, leather and wood finishing with some delayed sweet baking spices. As the second third progresses, wood moves into the middle of the profile. Some time later, a muted chocolate comes into the retrohale, just under the wood profile. By the halfway point, baking spices are driving the post draw.
Jiunn: The second third’s flavor profile calms down, and it calms down a bit too much. The flavor intensities are dialed down, leaving me with primarily soft notes of cedar and roasted mixed nuts. The only intense part left is on the retrohale, still holding strong to dry red pepper spice and mixed nuts. Strength is still medium-full, and body is still medium. 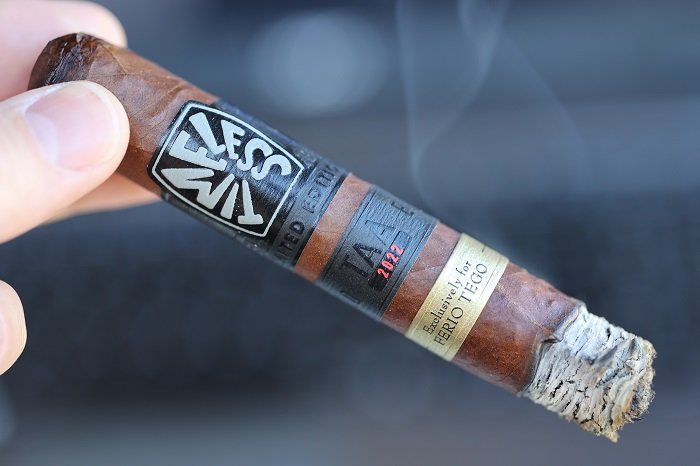 Aaron: The final third sees the black pepper become very mellow, but does have a long finish. At a half inch in, a light wood bitterness joins the profile. The retrohale remains toasted oak and earthiness. At an inch in, the toast level increases a fair amount. As the cigar comes to a close, the profile is heavily toasted oak and dry earth up front with a long finishing black pepper and wood bitterness in the background. The strength bumped up to full.
Seth: The final third delivers a profile of dry earth, coffee beans and wood. Mineral notes present as well, with lots of sweet and peppery spices on the finish. Chocolate and stone fruit qualities as well. Medium in strength and body. Love how the cigar has come down in strength gradually.
John: The last third has an initial flavor profile of bread, wood and baking spices that linger into the post draw. As it settles in, sweet wood defines the center. Dryness joins the post draw as it continues. Approaching the halfway point of the last third, baking spices take over the middle of the profile and the post draw. Leather joins not long after, sitting in the middle and post draw as well. As the bottom half progresses, leather takes over the profile.
Jiunn: The final third is unchanged. It’s still a toned down version of the first third, leaving mainly soft notes of cedar and roasted mixed nuts. Strength and body is unchanged at medium-full and medium, respectively. 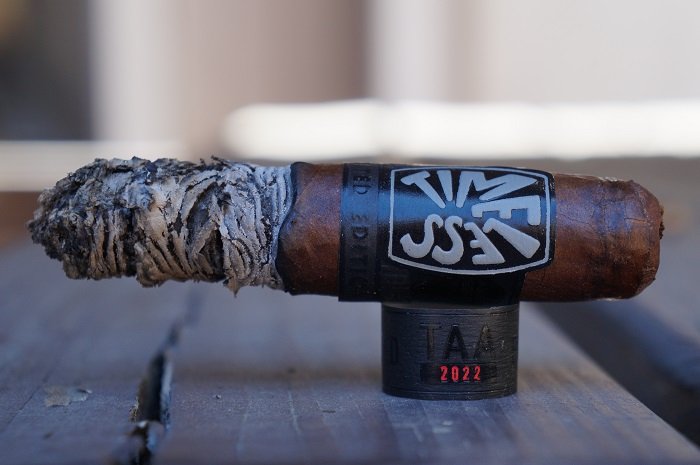 Aaron: The burn was a bit wavy at times, but never needed any intervention. The ash held on through each third.
Seth: Burn was great for the first two thirds, and then I had some canoeing in the final third.
John: The burn was straight through the review, with the ash holding on in 3/4 inch increments and falling naturally.
Jiunn: Great burn performance. Even burn, tight ashes, cool burning temperature and ample smoke production. 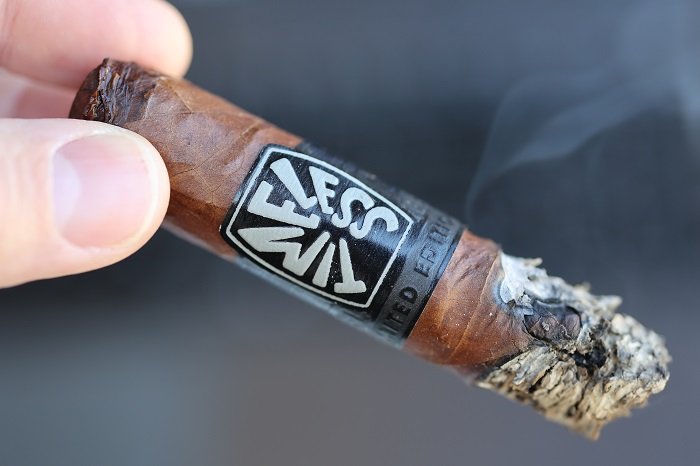 Aaron: The draw was slightly tighter than I prefer, but didn’t cause any issues with the smoking experience.
Seth: Nice draw throughout. Perfect level of resistance.
John: The draw was into the resistant spectrum, roughly 2-1/2 to 3 notches.
Jiunn: Great draw as well, providing the ideal balance between air flow and resistance.

Aaron: The cigar began with oak, dark earth and bold baking spice. The spice morphed into black pepper fairly quickly and a faint cocoa note joined a bit later. The second third saw the oak gain a light toast and the cocoa note departed. The final third saw a light wood bitterness join and the toast level increase. The Ferio Tego Timeless TAA 2022 started well with a heavy and potent flavor/strength combination. As the cocoa dropped out and the profile became a bit dry in the second third, the profile dropped a level in enjoyment and maintained that level the rest of the way. This cigar definitely packs a strength punch. I was hoping the profile from the first third could have held on longer, but with that said, I’m not sure I’d see myself coming back to this cigar all that often.
Seth: I know this blend is like the TAA release from 2020, and I thought highly of that release, so it is not a surprise this Ferio Tego Timeless TAA 2022 did well for me. I am not surprised Herklots worked to bring back a similar blend. It was well received. I enjoyed the flavors of cocoa, leather, wood and sweet spices throughout. Burn was not great, which was surprising, but I could have just had that cigar. Nice strength and body. It was nice to “come back” to this blend. It has been a while since I smoked it. If this becomes an annual TAA blend, I will buy it every year.
John: Ferio Tego showcasing what a great TAA cigar should be with the Ferio Tego Timeless TAA 2022. The first and second thirds had a lot of flavor progression without sacrificing balance, while the last third ended up losing a bit of steam by the halfway point. The burn was perfect, and the draw was somewhat into the resistant spectrum. I would happily smoke this TAA offering from Ferio Tego again. Total smoking time was a great value at 2 hours and 26 minutes.
Jiunn: The Ferio Tego Timeless TAA 2022 started off with such a blast of full flavors, providing equal intensities mouth coating dry red pepper spice and softness in cedar and roasted mixed nuts. But by the time the cigar reached the second third, the intensity lost steam and became too soft and a bit uneventful. I just wish it was full throttle flavors for the entire cigar. Nice attempt, but falls short.