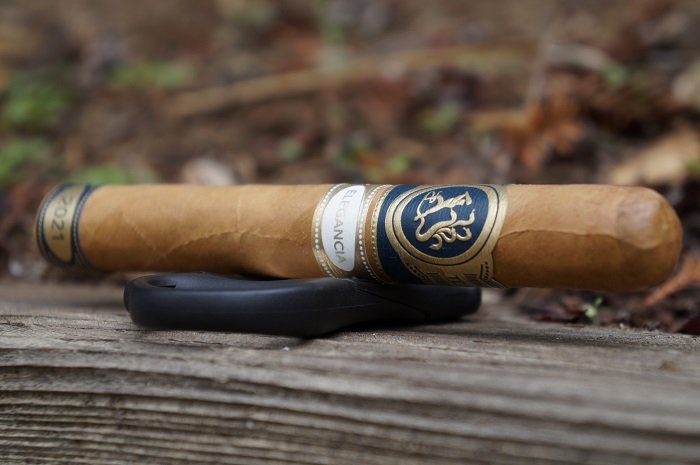 Aaron: The wrapper on the Ferio Tego Elegancia is a light, golden brown and has a few knotty, raised veins present. The seams are smooth and caps well applied. The cigar has three bands, with the primary and foot bands both carrying the same navy blue and gold color combination. The primary band carries the company logo and name while the foot band denotes the year. The secondary band is gold and white and denotes the line. The aroma from the wrapper is dry hay and light earth, while the foot brings stone fruit sweetness, dry hay and wood. The pre-light draw brings a sweet, aged cedar.
Seth: The Ferio Tego Elegancia is beautiful in appearance. Great coloring on the wrapper. Nice dark Claro coloring. Silky and firm in texture, there are few veins throughout. Those present are small. I am picking up aromas of tobacco, hay, wood and cream from the wrapper. Honey too on the foot.
John: The Ferio Tego Elegancia has cellophane, and a UPC sticker that is placed away from the opening so it remains intact when the cellophane is opened. The cigar is triple banded, with ‘Elegancia’ as a secondary band and ‘2021’ as a foot band. For aromas off the wrapper, I could pick out sweet bread, fermented tobacco, old barn wood and hay. From the foot, the only thing distinct was mild, sweet hay.
Jiunn: The Ferio Tego Elegancia has a golden brown/light caramel wrapper shade. Veins are well pressed, seams tight, bunch and roll even and head well wrapped. Aromas from the wrapper give cedar, hay and nuts. Aromas from the foot give all the wrapper aromas plus a subtle black pepper. Cold draw gives the wrapper aromas (cedar, hay, nuts). 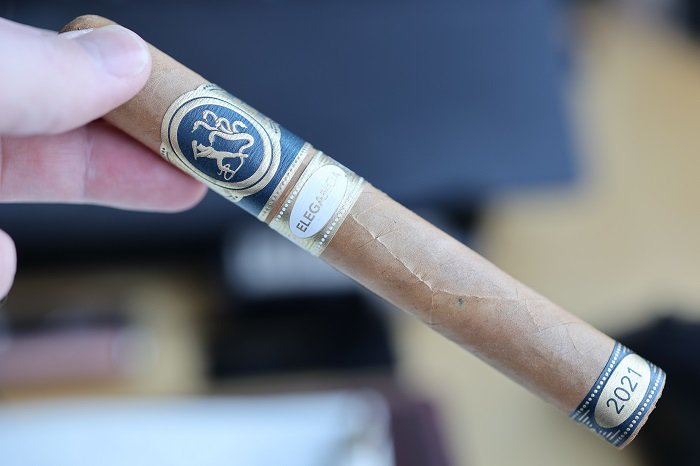 Aaron: The cigar begins with toasted, slightly stale cedar, mustiness and light chalkiness. At a half inch in, the cedar loses the stale note. At three quarters of an inch in, the chalkiness has departed. The retrohale brings musty, toasted cedar. At an inch and a half in, a light, dry earth joins the profile. The strength in this third was mild-medium.
Seth: The first third starts out with lovely cream, cedar and citrus qualities. I am picking up some stronger wood and nut qualities, and it has this milky Brazilian nut quality. There is this herbal spice profile present, and it has this green tea and pepper vibe. Medium in strength and body.
John: The initial flavors are sweet wood, hay and a clean wood finish. Some light plus red pepper flake comes through the post draw right away. Sweetness begins to linger through the post draw at light plus strength after a few puffs. Some creamy wood developed on the retrohale as it progressed. By the 10 minute mark, mild dryness settles on the post draw. Baking spices and mild chocolate mix with the wood on the retrohale as it continued.
Jiunn: The first third is all about soft and elegant. Hay, cedar, dried nuts and a hint of cherries. Best of all, no bitterness from the Equador shade. Retrohaling introduces spice, giving a comfortable spicier baking spice. The finish is a soft and lingering cedar. Strength and body is medium. 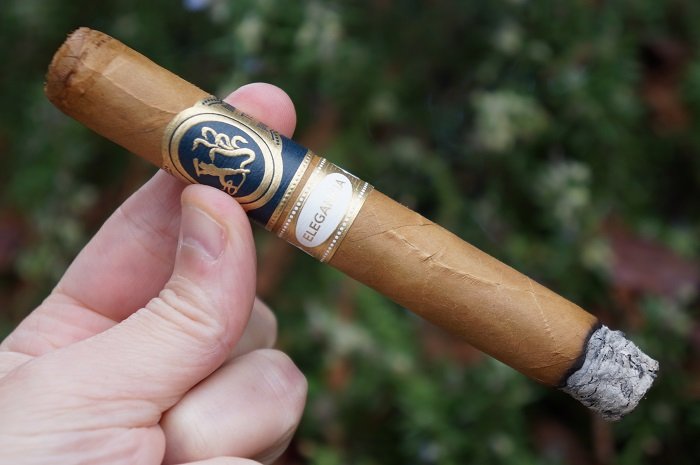 Aaron: As the second third begins, the profile is fairly mellow with musty, toasted cedar that is slightly ahead of the dry earth. At a half inch in, the toast level increases a bit. The retrohale remains musty, toasted cedar. At an inch and a quarter, the dry earth is now even with the musty, toasted cedar and the overall profile is now a bit fuller. The strength in this third bumped up to slightly below medium.
Seth: The second third delivers a flavor profile revolving around cedar, cream, nuts and earth. There are some herbal and pepper qualities present as well, but the cigar is not what it was in the first third. Medium in strength and body.
John: The second third begins with creamy baking spices with a sweet wood center and wood on the finish. Bread came into the retrohale as it settled, as the dry wood on the post draw moved up to medium strength. As the second third continued, nutmeg earthiness moved into the middle of the profile. By the halfway point, the profile was wood forward.
Jiunn: The second third has a couple changes. The cherry note is more distinct as well as the overall profile is starting to get a harsher wood bitterness. The bitterness isn’t too bad, since the other notes of hay, cedar, nuts and cherries still play a bigger role. Strength and body remains medium. 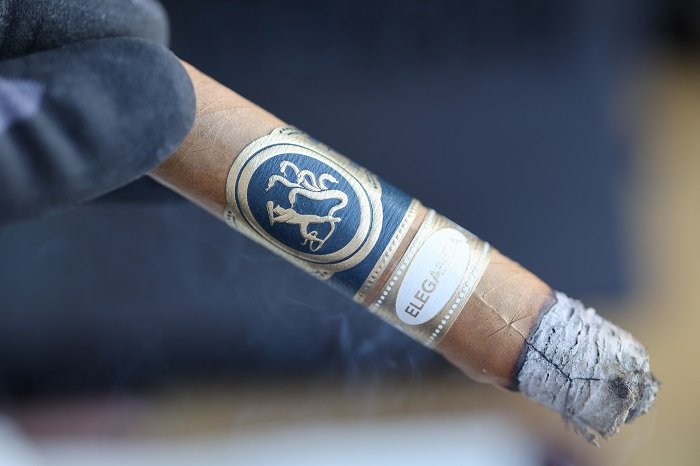 Aaron: As the final third begins, the toast level becomes pretty heavy. At a half inch in, the heavy toast transitions to light char which brings a mild bitterness to the profile. The retrohale is now musty, toasted cedar and dry earth. At an inch in, the bitterness picks up a bit. The cigar wraps up with musty, charred cedar and dry earth even up front with some bitterness a bit behind. The strength in this third bumped up to medium.
Seth: The final third was right in line with the second third. Nice profile but lacking what was delivered in the first. I was picking up cream, cedar and nut qualities. Finish was that of pepper and herbal notes. The cigar smoked at that medium level for strength and body.
John: The last third consisted of creamy wood with nutmeg and earth in the center, finishing with a dry wood. As it settled in, wood took home in the center of the profile. As it progressed, some mild chocolate added complexity to the retrohale. Mild bitterness started to come through the finish as it approached the halfway mark.
Jiunn: The final third’s flavors allow for the wood bitterness to creep a bit too much, now overtaking the softer notes. This in itself is the sole contributor to having a less enjoyable third. Strength and body finishes the same medium. 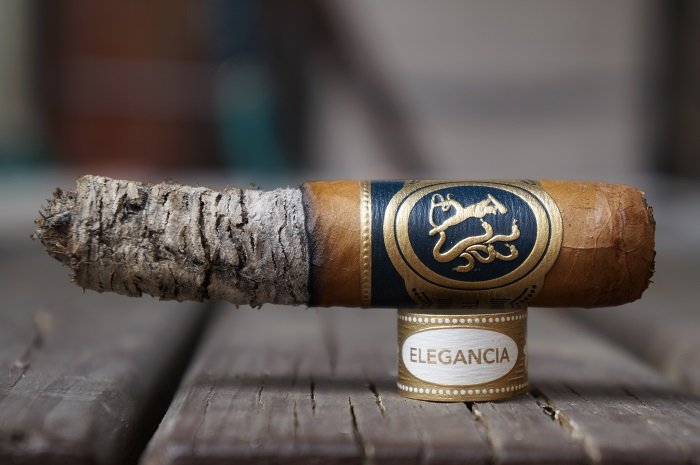 Aaron: The burn line was straight the entire way and the ash held on through each third.
Seth: Very nice burn throughout.
John: The burn was reasonably straight through the review. A small split occurred part away into the review, likely weather related.
Jiunn: Best possible burn performance. Even burn, solid ashes, cool burning temperature and ample smoke production. 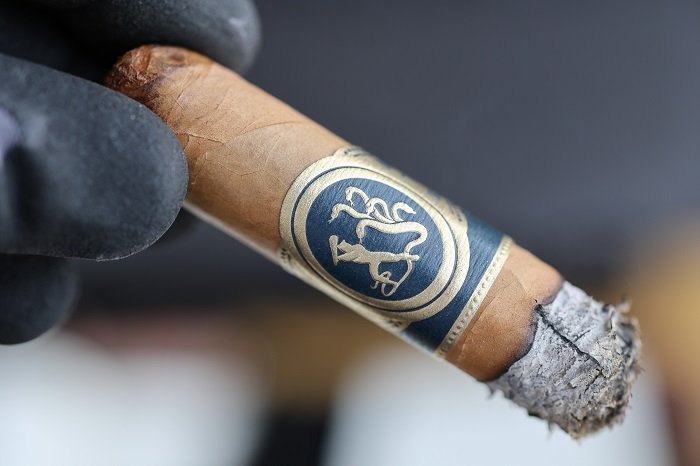 Aaron: The draw was slightly tighter than I prefer, but didn’t cause any issues with the smoking experience.
Seth: Perfect draw from start to finish.
John: The draw had some resistance to it, roughly 2-1/2 to 3 notches towards the resistant spectrum.
Jiunn: Draw performance was equally excellent, giving the ideal air flow and resistance.

Aaron: The cigar began with toasted cedar, mustiness and light chalkiness. The chalkiness departed a bit later and some dry earth joined towards the end of the first third. This profile held through the second third and the final third saw the toast build up and transition to char along with some bitterness. The Ferio Tego Elegancia was quite average through the first two thirds and dropped down a level in the final third with the char and bitterness joining in. Overall, the cigar is a bit of a disappointment as I was eager to see how this limited edition for the new company would fare. Add the high price point to the cigar and it makes it even tougher to think about coming back to.
Seth: If the Ferio Tego Elegancia delivered the first third profile throughout, this would have been a good cigar. Very good rating. Unfortunately, it fell off in the second third. It held on to the end, but it did not have that pop and complexity that was present in the first. Great construction, and nice strength and body, but not enough for me to come back. Price is tough.
John: The Ferio Tego Elegancia provided some interesting and nuanced flavors through the first third. As it progressed into the second and last third, that complexity fell off, and while it was still pleasant, it didn’t have the same flavor engagement for me. The burn was fairly flawless, and the draw had some resistance to it. I would smoke another Elegancia again, if only to see if the second third could deliver the complexity in the first third. Total smoking time was 1 hour and 50 minutes exactly.
Jiunn: Elegancia is a fitting name to this cigar. Plenty of soft notes that allows for full retrohales without any backlash, and mild strength. The only negatives to the Ferio Tego Elegancia are the wood bitterness that seeped into the profile a bit too much within the final third as well as a demanding $21 price tag. Nice entry for Herklots.