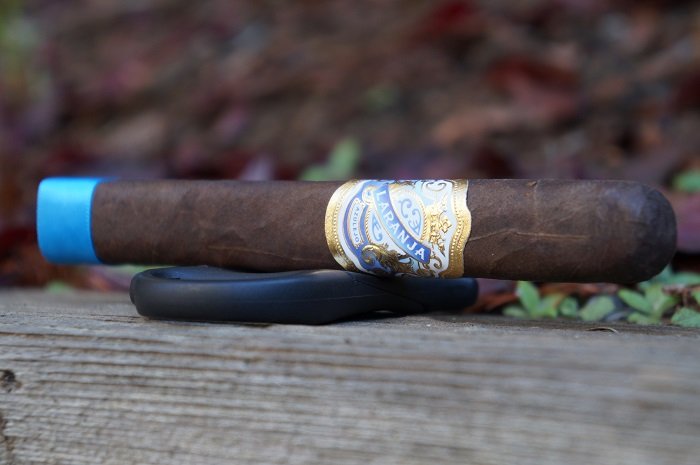 Aaron: The box pressed Espinosa Laranja Reserva Azulejo Toro has a uniform dark brown wrapper with a few lightly raised veins. The seams are smooth and the caps are well applied. There are two bands, with the primary being the traditional design for the line, but carrying a white, gold and gradients of blue color combination. The foot ribbon is a light blue. The aroma from the wrapper is dark earth and wood, while the foot brings cedar and lightly nose tingling ammonia. The pre-light draw brings a lightly musty cedar.
Seth: Lovely pressed, the Espinosa Laranja Reserva Azulejo Toro has a nice level of firmness throughout. The coloring of the wrapper is right around Natural, almost this Natural light Maduro coloring. Simple but attractive. The wrapper sports few veins throughout, but there is a light bit of tooth present as well. The texture is silky with some oils, and I am picking up aromas of sweet spices, stone fruit, earth and chocolate. This may sound crazy, but I hope some of you are on the same page when I say this. It feels, looks and smells like a cigar out of San Lotano. I do not mean that poorly.
John: The Espinosa Laranja Reserva Azulejo Toro comes in cellophane, and has a UPC sticker with a designed tear point so the cellophane opens leaving the UPC sticker intact. The cigar has a primary band, along with a blue ribbon foot band. Additionally, the cigar has an artisanal complication of being box pressed. Aromas off the wrapper included a medium-full strength raisin, baking spices, molasses, mild earth and wood. Similar notes were present from the foot in varying levels of strength.
Jiunn: The Espinosa Laranja Reserva Azulejo Toro has a quality maduro wrapper shade showing a good amount of toothiness. Veins are well pressed, seams tight, bunch and roll even and head well wrapped. Aromas from the wrapper give abundant barnyard. Aromas from the foot tell the same abundance in barnyard plus white pepper spice. Cold draw reveals cedar and figs. 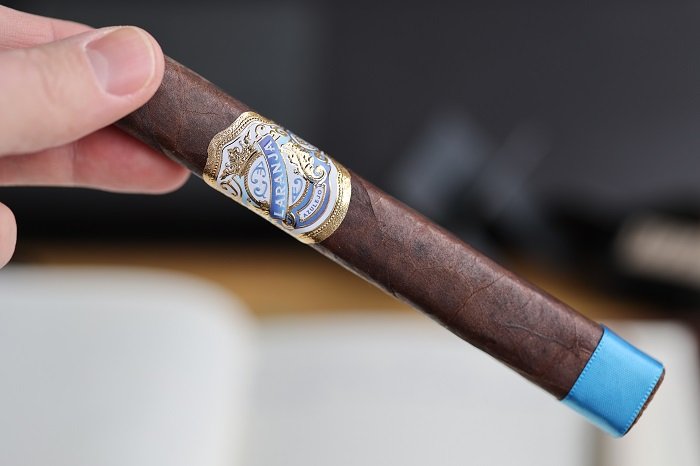 Aaron: The cigar begins with a potent mix of dark wood, dark earth and baking spice. At a quarter inch in, a light creaminess joins in. At a half inch in, some cocoa powder joins, which mixes well with the potent baking spice. At an inch in, most of the components mellow in intensity, but the baking spice has now transitioned to black pepper and remains quite potent as it is delayed and then has a long finish. The retrohale brings musty, dark wood, dark earth and a black pepper zing. At an inch and a half in, the black pepper begins to mellow. The strength in this third was medium-full.
Seth: The first third begins by delivering a sweet spice profile that is paired with cedar and leather qualities. There are faint earth and nutty qualities present as well, and the finish is that of tobacco, pepper and earth. Medium to medium-full in strength and body.
John: The first opens up with toasted ground black pepper, baking spices and creaminess. The post draw consisted of lingering, creamy pepper with a short finish that gets replaced with leather and wood. The pepper recedes in intensity to medium by creamy sweetness at roughly the 10 minute mark. Creamy wood pushes its way into the middle of the profile as it progressed. By the 20 minute mark, creaminess sits on the post draw, accented by light-plus strength pepper.
Jiunn: The first third is rustic in flavors. Bountiful dry red pepper spice and minerals. These notes are deep and drawn out, especially on the finish. Retrohaling is still quite rustic but tapers some of it by adding some dried nuts into the fold. Strength is medium-full and body is medium. 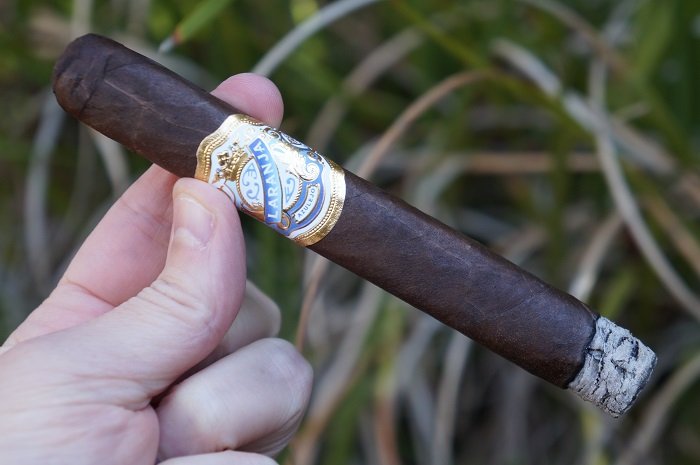 Aaron: The second third starts with a pretty significant transition as the wood is no longer dark but is paired with mustiness and the dark earth is now dry earth. The black pepper has mellowed some more, and the cocoa powder has departed. The retrohale is musty, lightly toasted wood, dry earth and mild black pepper. At an inch and a quarter, a light bitterness joins the profile. As the third comes to a close, the profile is musty, lightly toasted wood up front, dry earth a bit behind and black pepper a bit behind that, with some bitterness in the background. The strength remained at medium-full.
Seth: The second third delivers a flavor profile that has some lemongrass, pepper spice and barnyard qualities. There are faint nut qualities preset on the finish, and it has some faint touches of earth and tobacco as well. Like before, medium to medium-full in strength and body. Flavor profile showed some transitioning.
John: Creamy wood took the cigar into the second third, with a creamy food finish. A toasted, syrupy sweetness joins at nearly the halfway mark. Some mild citrus comes through at the end of the draw not long after. The citrus sweetness migrates into the center of the profile in the bottom half.
Jiunn: There’s a key aspect of the second third that I like that I did not like within the first third. The dominance in red pepper spice is lessened, creating more nuttier and semi-bready notes. However, the strength is still a powerhouse at medium-full (body still medium). 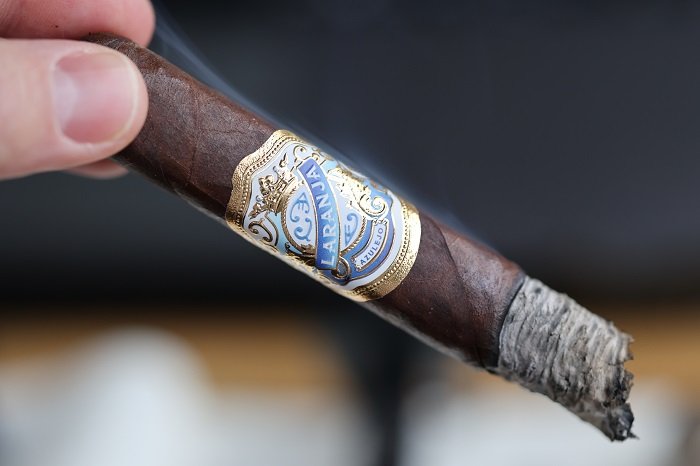 Aaron: The final third begins with the dry earth becoming even with the musty, toasted wood. At a half inch in, the bitterness picks up a bit. The retrohale remains musty, toasted wood, dry earth and mild black pepper. At an inch in, the toast level becomes pretty heavy and the bitterness is now in the middle of the profile and has a long finish along with the black pepper. As the cigar wraps up, the profile is musty, heavily toasted wood and dry earth up front with bitterness a bit behind and black pepper in the background. The strength remained at medium-full.
Seth: The final third delivers a flavor profile that is heavy in the pepper spice department, and it is paired with leather, cedar, tobacco and earth notes. I am getting faint nut and citrus qualities on the finish, and there are some espresso qualities present as well. Medium to medium-full in strength and body.
John: The last third got things started with creamy pepper at medium-minus strength that lingers into the post draw and evolved into red pepper flake. As the last third settled in, a mild sweetness and leather settled into the post draw. By the halfway point, that leather has pushed into the center of the profile.
Jiunn: The final third’s main difference is the throttle of strength, upticking from medium-full to full blown full. The flavors however, follow suit from the second third, with lessened dry red pepper (but still the main factor), dried nuts and semi-breadiness. 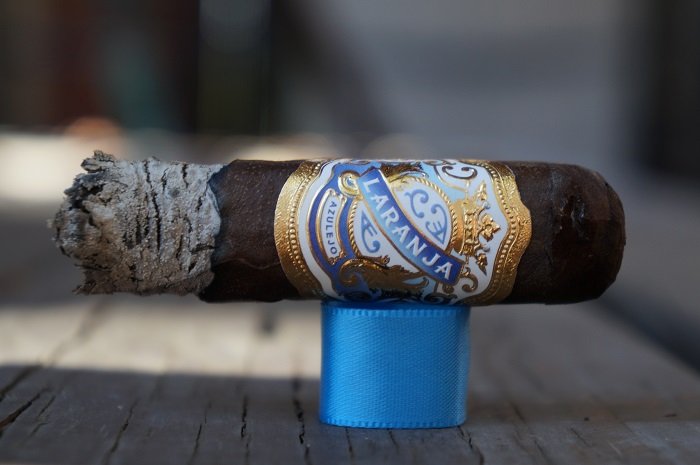 Aaron: The burn was straight throughout and the ash held on in inch and a half increments.
Seth: Beautiful burn.
John: The burn was relatively straight through the entire review, with the ash holding on up to 1-1/2 inches before I would tap it off.
Jiunn: Perfect burn performance. Even burn, tight ashes, ample smoke production and cool burning temperature. 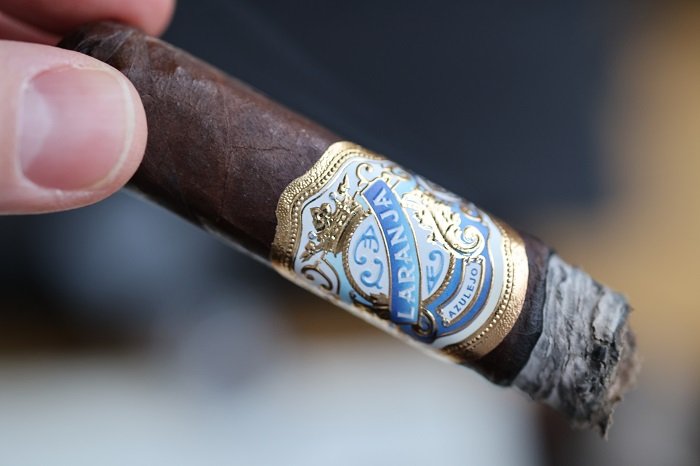 Aaron: The cigar began with dark wood, dark earth and baking spice, later transitioning to black pepper. There was a bit of cocoa powder for a bit. The second third changed to musty wood and dry earth with the final third seeing some bitterness build up. The Espinosa Laranja Reserva Azulejo Toro started very nicely with a bold combination of good flavors. The second third was like a light switch seeing those bold flavors mellow and then the cigar finished with a fair amount of bitterness taking the profile downhill even more. Good start with a downhill slide from there which is a bit disappointing. The cigar carries a fair amount of strength to it as well. I’d be interested in checking out the Corona vitola to see if it can maintain that first third longer, but I don’t see coming back to this particular vitola.
Seth: I liked this blend and I think this is a good cigar. I do not care for it as much as the original Laranja Reserva, but I believe it to come in second ahead of Laranja Reserva Escuro. I thought it was a balanced cigar while showing the dark side of Ecuadorian Sumatra. AJ typically shows that in general, that darker Ecuadorian Sumatra vibe, but I am not one that always gets behind that. I typically go for the lighter take on the wrapper that EPC delivers. The Espinosa Laranja Reserva Azulejo Toro is cigar I can get behind, and I believe it to be one of the better Sumatra offerings to come out of AJ’s factories in a while. I liked the strength and body, and it went well with the core flavors of sweet spice, pepper, leather and earth. Perfect time of year (November) for a cigar of this nature in my opinion.
John: The Espinosa Laranja Reserva Azulejo Toro took me all over the flavor intensity map, starting with a medium-full experience and leading all the way down to light-plus and nuanced. The first and second thirds provided the most complex flavor delivery. The draw and burn were both perfect. I would smoke the Laranja Reserva Azulejo Toro again as this cigar falls directly into my wheelhouse. If you’re a fan of more intense pepper or spice notes, this might be a good choice for you too. Total smoking time was right in the ball park at 2 hours and 14 minutes.
Jiunn: Full throttle strength and rustic flavor profile are the two key words that come to mind. Overall, it’s all about red pepper spice and minerals, with not enough softer notes. The flavor mix in itself isn’t what entirely bothered me. What bothered me was the overt strength plus the rustic flavors. The strength added a bit more salt to the wound. I’ll pass on this Espinosa Laranja Reserva Azulejo Toro and will look forward to the next iteration.