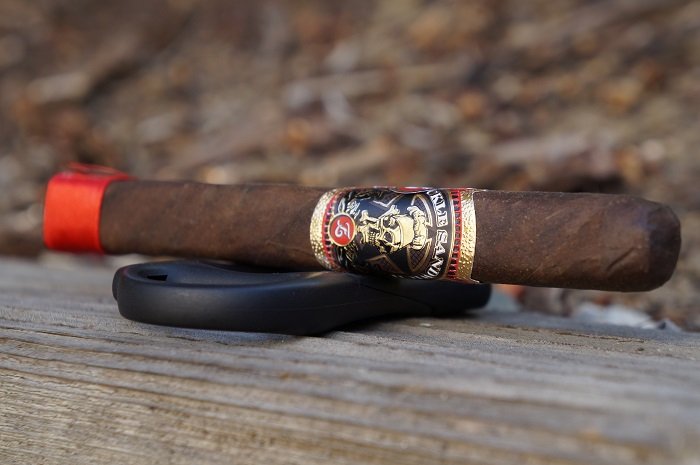 Aaron: The wrapper on the Espinosa Knuckle Sandwich Maduro Corona Gorda R is medium brown with well pressed veins and some fine tooth. The seams are pretty smooth while the caps have lifting edges. There are two bands, with the primary being black, gold, red and white with a skull wearing a chef’s hat. The foot band is a red ribbon. The aroma from the wrapper is dark earth and cocoa powder while the foot brings wood, earth and a faint ammonia note. The pre-light draw brings an airy and lightly musty cedar along with a faint spice on my lips.
Seth: The Espinosa Knuckle Sandwich Maduro Corona Gorda R is tightly pressed and it is leathery in texture. Small to medium size veins throughout, the cigar has a nicely applied cap. Dark color on the wrapper. A beautiful Colorado Maduro color with espresso bean qualities. Aromas of dark earth, minerals, tobacco, oak and licorice.
John: The Espinosa Knuckle Sandwich Maduro Corona Gorda R comes in cellophane, and has a UPC sticker with an integrated tear space so it stays intact when the cellophane is opened. Additionally, unlike the Habano, the cigar has a soft box or square pressed shape. There is a primary band along with a secondary ribbon foot band in red. For aromas, there is a deep espresso combined with tobacco and wood. From the foot, I picked up on hay, tobacco and earth.
Jiunn: The Espinosa Knuckle Sandwich Maduro Corona Gorda R has a hearty Colorado Maduro wrapper shade. Veins are well pressed, seams tight, bunch and roll even but a bit loosely packed and head finished off cleanly. Aromas from the wrapper tell of pungent cedar and dry red pepper spice. Aromas from the foot give rich, dank earth and dry red pepper spice. Cold draws reveal a hint of dried plums and cedar. 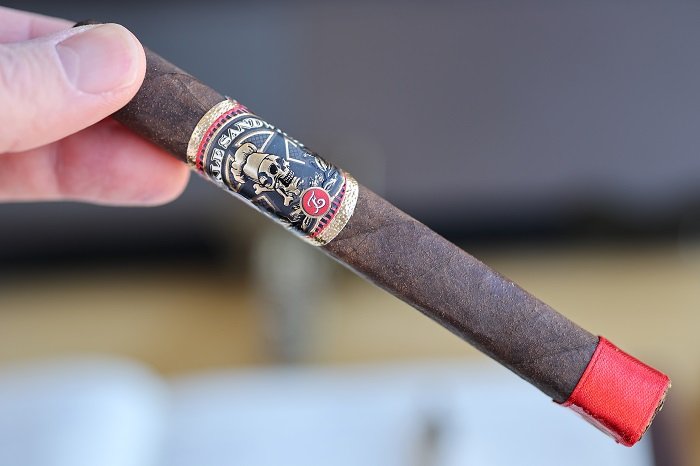 Aaron: The cigar begins with oak, dark earth and bold black pepper. At a half inch in, the oak gains a light toast and a light mustiness joins the profile. The retrohale is musty oak, dry earth and mid level black pepper zing. As the third comes to a close, the lightly musty, toasted oak is up front with the earth, now slight dry, and black pepper a bit behind. The strength was slightly above medium.
Seth: The first third begins with some light licorice notes, and they are paired with some oak, molasses sweetness, rich earth and Christmas spices. Medium-full in strength and body, the cigar is quite lovely.
John: Earth and spices get things going with the first few puffs. Some creamy spice and tobacco takes home on the retrohale. I would rate the spices at medium-full intensity. Those spices are also quite intense through the post draw, along with some creamy wood. As the first third settles in, chocolate joins the retrohale. Moving towards the halfway point, the baking spices have backed off to medium strength levels.
Jiunn: The first third is predominantly earthy and spicy. Plenty of toasted cedar, dry red pepper spice that layers the entire tongue and dirt. The retrohale is pretty rough, as it gives an overwhelming dose of dry red pepper spice. The finish is a bit unrefined, providing dirt and rear palate seeded dry red pepper spice. Strength is medium-full, and body is medium. 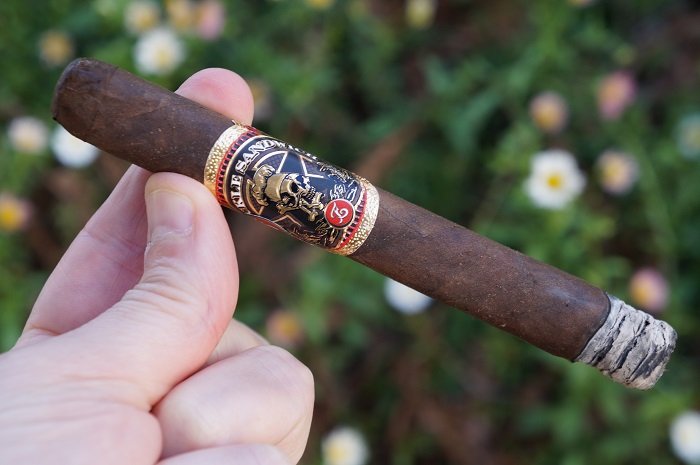 Aaron: As the second third begins, the black pepper mellows a bit and the dark earth becomes a bit dryer. At three quarters of an inch in, the black pepper is now pretty mellow. The retrohale is now musty, toasted oak, dry earth and mild black pepper. As the third comes to a close, the dry, dark earth is now even with the musty toasted oak up front with black pepper in the background. The strength remained at slightly above medium.
Seth: The second third delivers a flavor profile of rich cocoa, leather, oak, baking spices, minerals and earth. Like before, it is medium-full in strength and body, but it has lost some of its elegance from the first third.
John: For the second third, creamy tobacco combines with baking spices, wood as mild earth and baking spices take each puff into the post draw. Chocolate returns to the retrohale as it settles in. Approaching the halfway point, earth moves into the center of the profile at medium strength.
Jiunn: The second third decreases the overwhelming dry red pepper spice. The profile remaining is one that is highly earth forward with charred cedar and dirt. Strength and body is unchanged at medium-full and medium, respectively. 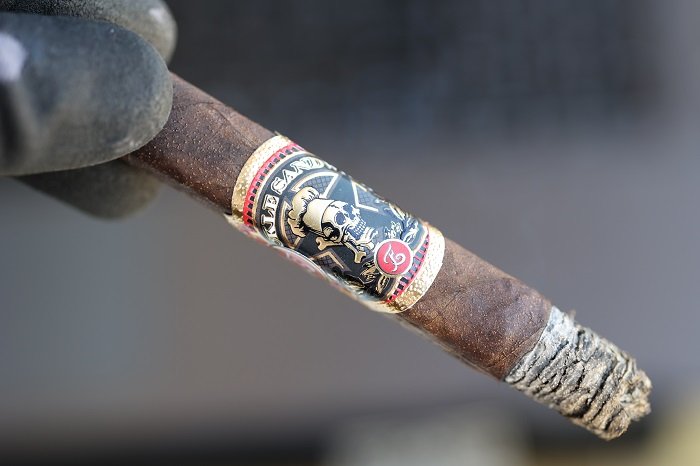 Aaron: The final third continues on with the profile from the second. At a half inch in, some light wood bitterness becomes present. The retrohale remains musty, toasted oak, dry earth and mild black pepper. As the cigar comes to a close, the musty, toasted oak and dry, dark earth remain even up front with black pepper and wood bitterness in the background. The strength remained at slightly above medium.
Seth: The final third got a little hot, and that hurt the cigar. I was still getting those oak and warm spice notes, and it was paired with strong earth and mineral qualities, but a little hot. Black pepper present on the finish as well. Medium-full in strength and body.
John: Earth takes the cigar into the last third. Baking spices and earth combine through the post draw. There is no more evolution until the cigar approaches the halfway point, then creamy tobacco returns to the retrohale.
Jiunn: The final third has quite a bit of complexities lost. The pepper is essentially gone. What I’m left with is just cedar and dirt. Strength and body finishes the same medium-full and medium. 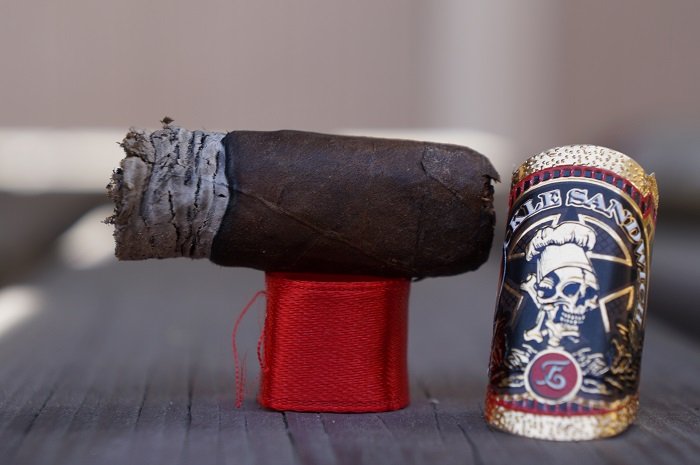 Aaron: The burn was straight the entire way, and the ash held on in inch and a quarter increments.
Seth: Very good burn from start to finish.
John: As I commented on the Habano review, it’s clear this comes out of the San Lotano factory as the burn is razor straight and the ash dropped at least once in my lap at the one inch mark.
Jiunn: Excellent burn performance. Even burn, solid ashes, cool burning temperature and good smoke production. 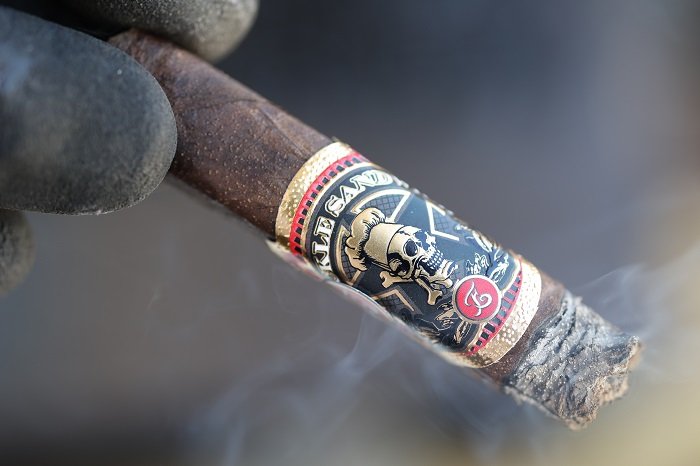 Aaron: The draw was slightly tighter than I prefer, but didn’t cause any issues with the smoking experience.
Seth: Very nice draw.
John: The draw was at most 1/2 to 1 notch towards the resistant spectrum, putting it in the ideal range for draw.
Jiunn: Excellent draw performance as well. The ideal balance between air flow and resistance.

Aaron: The cigar began with oak, dark earth and bold black pepper. The oak gained a toast note fairly quickly and some mustiness joined in. The second third saw the earth become dry and the black pepper mellow. The final third saw some light wood bitterness join in. The Espinosa Knuckle Sandwich Maduro Corona Gorda R had an average flavor profile throughout, focused on musty, toasted oak and dry, dark earth with a supporting black pepper. A pretty basic and boring profile, but for those that enjoy these core flavors, it might be something they enjoy. I don’t see myself returning to this cigar.
Seth: The Espinosa Knuckle Sandwich Maduro Corona Gorda R is similar to that of the Habano release in that it is dependent on the vitola. Again, you need to smoke this blend in the Corona Gorda offering to have the best experience. I felt this Dark Sumatra really captured some maduro qualities that you get with some Mexican San Andres and CT Broadleaf wrappers, and that is the first time I have had that experience. I had it with the Toro and Robusto offerings as well. Typically Dark Sumatra is still dryer, spicier and has some stone fruit qualities, but this was rich. Like the Habano offering though in this vitola, the cigar heats up in the final third. That kills the flavors, and there just isn’t enough in the second and final third to take this cigar to a good level.
John: The Espinosa Knuckle Sandwich Maduro Corona Gorda R offers up some fairly full strength flavors, surprisingly more intense than the Habano, which I was not expecting. I enjoyed the first and second thirds but given the intensity of the flavors, this cigar might be a bit too much for a lot of smokers. As was the case with the Habano, construction and draw were perfect. I would definitely smoke the Knuckle Sandwich Maduro again, and I think it’s different enough from the Habano release to provide another option. Total smoking time was 1 hour and 39 minutes.
Jiunn: When it comes to a Knuckle Sandwich, it’s hands down Habano over Maduro for me. The Espinosa Knuckle Sandwich Maduro Corona Gorda R off first draw was a profile that was too earth and spice forward, with an unpleasant finish. I don’t think a thinner ring gauge works for this format, so I’ll be interested in the other thicker ring gauges in the hopes of evening out the highly earth and spice tones. This vitola is a pass for me.