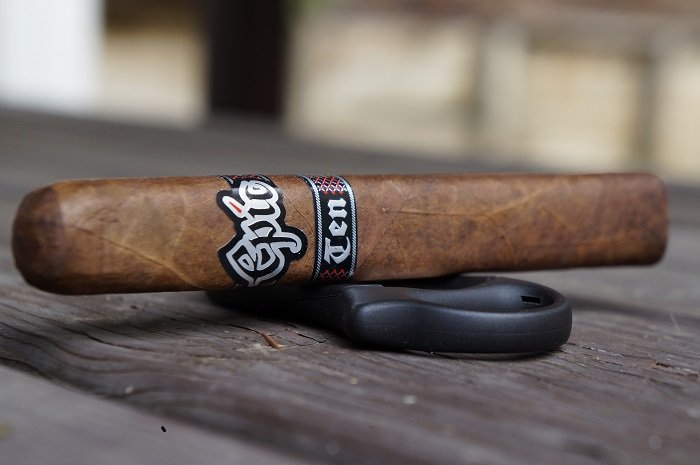 Aaron: The rectangle press Epic Ten has a wrapper that is a marbled medium brown. There are some visible veins, but they are well pressed and the seams are very smooth and hard to detect. The head is finished decently, with a top cap that could have been done better. There are two bands and they both carry a black, silver and red color combination. The primary band has the company logo up front with the country of origin and manufacturer on either side. The secondary band has the line name up front along with the anniversary and limited edition designations on either side. The aroma from the wrapper brings a nice humidor cedar note. The foot brings a very inviting musty cedar note. The pre-light draw brings a lighter version of the musty cedar.
Seth: Lovely pressed with a milk chocolate wrapper, the Epic Ten is firm in hand and sports few veins. Those present are smaller in size, and the cigar is silky in texture. Dark Natural in coloring, the wrapper delivers aromas of sweet spices, stone fruit and leather. The foot is giving some similar notes with cherries, tobacco and rich earth.
John: The Epic Ten is double banded, and opening the cellophane tears the UPC sticker in half. The cigar itself is box pressed, with a brown wrapper showing firmly pressed veins. Aromas from the cigar included bread, cedar and a general sweetness underneath. From the foot, I was able to smell sweet raisin, cedar and hay.
Jiunn: The Epic Ten has an even and pale, lightly roasted coffee bean, Cameroon wrapper. Veins are well pressed, seams tight and bunch and roll even. Aromas from the wrapper give pungent red pepper, barnyard and cedar. Aromas from the foot tell sweet roasted nuttiness and ample red pepper spice. Cold draw gives mainly light cedar and a hint of red pepper tingling sensation on the tongue. 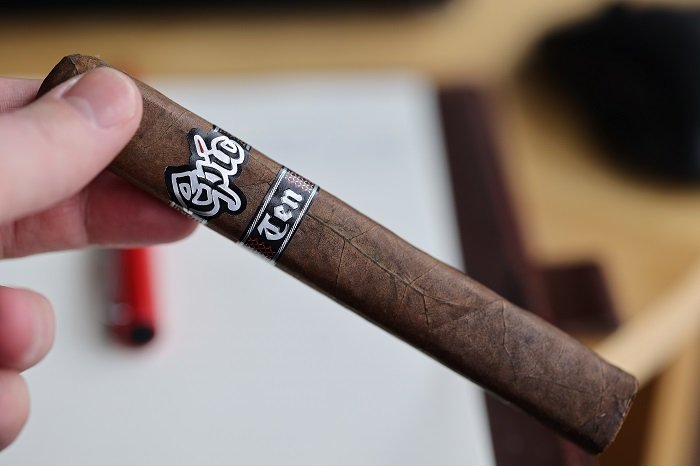 Aaron: The cigar begins with toasted wood, dry earth and light cinnamon. At a half inch in, the cinnamon has morphed into a mild black pepper while the toasted wood and dry earth are even up front. The retrohale is a mellow and even mixture of the toasted wood, dry earth and black pepper. At an inch and a half in, there are some faint hints of cinnamon that pop in and out. The strength in this third was slightly above medium.
Seth: The first third delivers a flavor profile that is almost entirely red pepper and black pepper. It is a sharp pepper too, so it is a little unpleasant. There are some faint rich earth notes with that, and I am getting some licorice and mineral notes. In terms of strength and body, the cigar smokes at a medium-full level. The sharpness just lingers.
John: The first puffs brought a flurry of flavors with chocolate, wood, hay and baking spices. The baking spices sit on the post draw immediately. A mustiness joins the retrohale as the first progressed. Approaching the middle, cedar moved into the center of the profile.
Jiunn: The first third starts with charred red peppers and ash. At an inch in, the charred red pepper seeps through quite a bit, laying it thick on the rear palate. Retrohaling gives a clean wasabi and red pepper mixture, but with a nice sweet nuttiness. Strength is medium-full, body is medium. 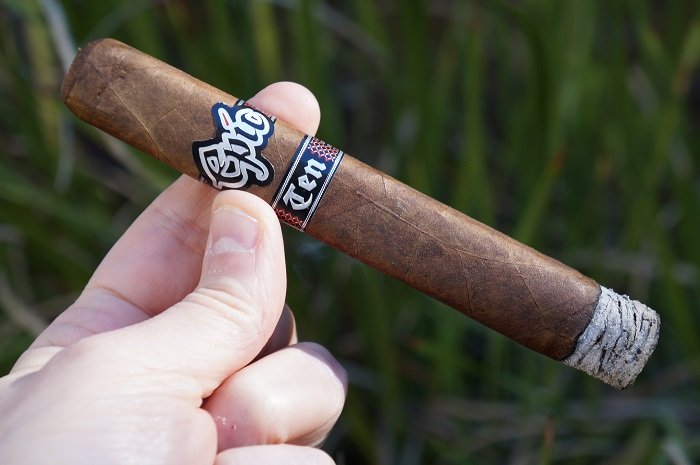 Aaron: As the second third begins, the black pepper is dull and in the background, but there’s a bit of cinnamon spiciness coming through while the toasted wood and dry earth remain even up front. The retrohale is a bit fuller in this third, but remains an even mixture of the toasted wood, dry earth and black pepper. At an inch and a half in, the cinnamon is no longer detectable. The strength in this third remained at slightly above medium.
Seth: The second third delivers a flavor profile that is focused on this tobacco, rich earth and subtle stone fruit profile. There are some spices, but nowhere near the level they were in the first third. It has a very long finish, and there is strength there, but hidden. Medium body and medium-full strength.
John: The second third is cedar forward with trailing sweetness. Mild bread comes through on the retrohale. By the halfway point, mild chocolate joins the retrohale. There are no other flavor components to remark on through the second third.
Jiunn: The second third is less spice driven as the first third, especially on the finish. But it is still the same baseline formula of charred red peppers and ash with a slight gut punch. Body remains medium. 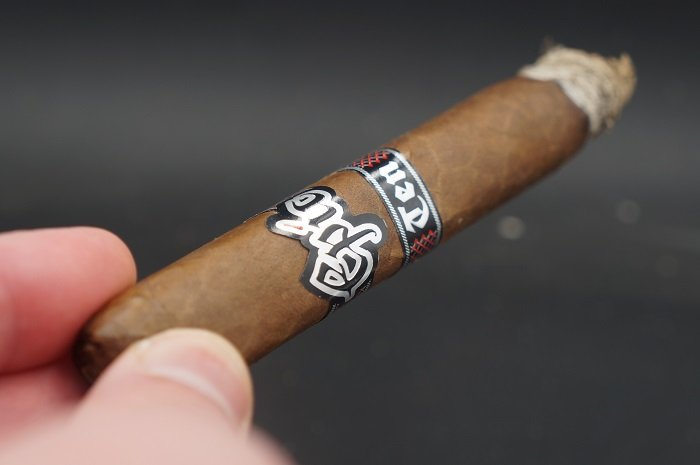 Aaron: As the final third begins, the black pepper picks up to become even with the toasted wood and dry earth. The profile is carrying an overall dryness. At a half inch in, the toast of the wood transitions to char which has a long finish. The retrohale has an even mix of toasted wood, dry earth and mustiness with light black pepper. The cigar wraps up with the charred wood and dry earth even up front and the black pepper in the background. The strength in this third remained at slightly above medium.
Seth: The final third delivers a flavor profile that has those stone fruit notes from before, and it is paired with a lot of red pepper spice. I am getting touches of curry as well which is interesting. There are still rich earth notes present as well and touches of tobacco on the finish. Medium-full in strength and body.
John: Bread, cedar and baking spices take the review experience into the last third. Some bitter cedar joins as the last third settles in. No other flavor changes through the final third.
Jiunn: The final third continues to be less offensive on the palate. Less charred red pepper and ash with a faint increase in roasted nuttiness. Strength and body finishes the same medium-full and medium. 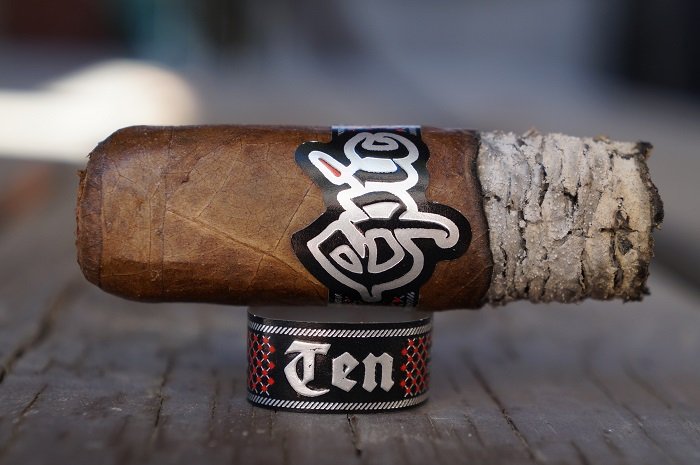 Aaron: The burn was straight the entire way. The ash held on in inch and a half increments.
Seth: From start to finish, the cigar delivered a nice burn line with a lovely charcoal ash.
John: The burn is straight through the entire review with the ash holding up to 2 inches.
Jiunn: Burn performance was perfect. Even burn, tight ashes, ample smoke production and cool burning temperature. 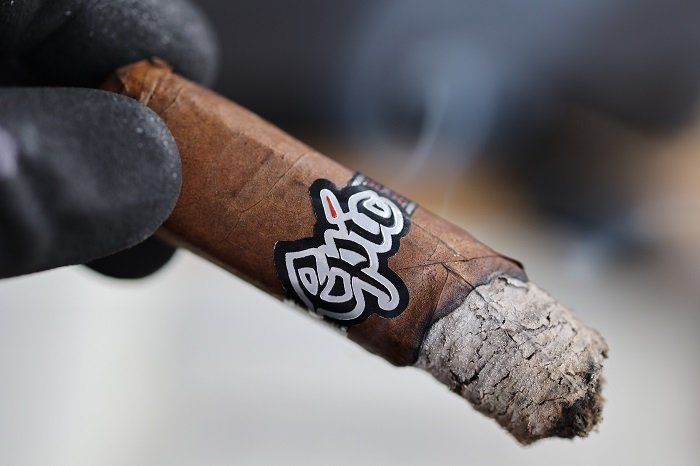 Aaron: The profile had a nice start with the cinnamon through the first half inch, but as it transitioned to black pepper, things became fairly average. It maintained this level of enjoyment through the rest of the smoking experience. The profile needed something else, such as sweetness or maintaining that cinnamon note which unfortunately wasn’t to be found. I’m a fan of the Epic portfolio, but the Epic Ten was a bit of a let down and I think played things a little too safe with it being an Anniversary release. The flavor profile, in combination with the high price point, probably leads me to not revisiting this cigar with any frequency.
Seth: I do not know where the Cameroon was, but I was not finding that vibe throughout the cigar. The Cameroon was overpowered by the Nicaraguan tobacco, and the Cameroon wrapper itself was missing those Cameroon qualities. I look at Ecuadorian Sumatra as either being darker or lighter in the flavor profile, and this was almost as if they were trying to make a darker flavor profile Cameroon. They failed. I think Skip is the only one to do something along those lines with BAKA. The Epic Ten was a blend that was fairly one dimensional and revolved around the filler blend of Nicaraguan tobacco. In some ways, I would have rather smoked this blend with a Connecticut wrapper or Pennsylvania Broadleaf. Average blend, very AJF, and a disappointment when you see Cameroon wrapper.
John: The Epic Ten was a pleasant, slightly above average, albeit underwhelming review experience considering the anniversary nature of the cigar. The Epic Ten did deliver some good flavors through the first third. I had high hopes for the cigar, given the Cameroon wrapper, and my enjoyment of other past Epic releases. The burn was razor sharp and perfect, with a somewhat resistant draw. Total smoking time was 1 hour and 42 minutes.
Jiunn: Any anniversary cigar drums up my excitement, especially an impressive 10 year anniversary for a smaller sized cigar company. On paper, this cigar looks to fit the part: Cameroon wrapper, higher priced and well known factory. But in regards to the taste of the Epic Ten, it is not worthy of an anniversary cigar. As a matter of fact, it’s not even worthy of a regular production cigar. The profile is highly unbalanced and assaults the palate with raw pepper and ash. At times it alleviates it, but not enough to be constantly reminded of it the entire smoking time. I honestly prefer Epic’s regular production over this. So this is a pass for me.