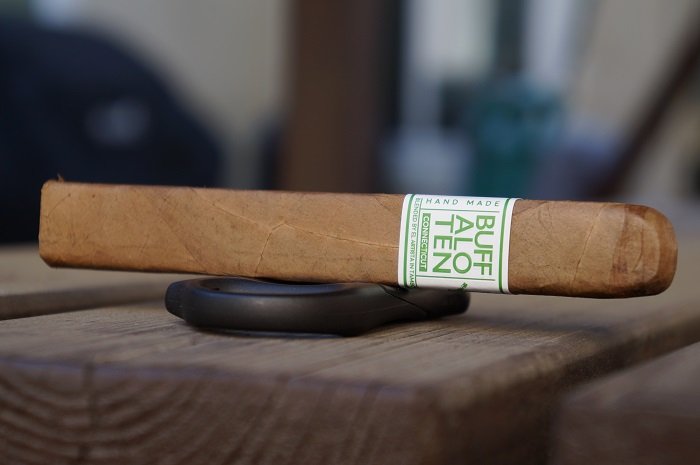 Aaron: The El Artista Buffalo Ten Connecticut has a rectangle press with the longer edges having flat sides and the shorter edges having rounded sides. The wrapper is dark tan and has some lightly raised veins present. The seams are raised in some areas while the caps are very well applied. The band is white and green and denotes the line and wrapper type. The aroma from the wrapper is fairly light and brings a mix of wood and sand while the foot is slightly sweet cedar and mild spice. The pre-light draw brings sweet, aged cedar along with a mid-level spiciness on my lips.
Seth: Extremely pressed, the El Artista Buffalo Ten Connecticut is silky with minor veins. The coloring is quite faded, and it is between Claro and Natural. Aromas of cedar, earth, spices and tobacco.
John: The El Artista Buffalo Ten Connecticut is cellophaned, and has a UPC sticker with an integrated tear point when the cellophane is opened. The cigar has a single band, and has an additional complication of being box pressed. Aromas from the wrapper included chocolate, bread and cedar. I picked out sweet hay from the foot.
Jiunn: The El Artista Buffalo Ten Connecticut has a Colorado Claro wrapper shade. Veins are well pressed, seams tight, bunch and roll even and head well wrapped. Aromas from the wrapper give wet barnyard, cedar and nuts. Aromas from the foot provide an added black pepper spice. Cold draw gives hay, cedar and nuts. 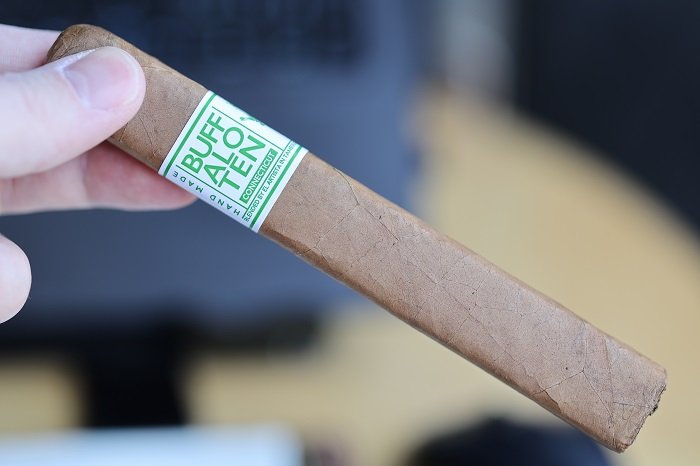 Aaron: The cigar begins with aged cedar and light amounts of cinnamon and sweetness. At a quarter inch in, a light mustiness joins the profile. The retrohale brings a combination of cedar and dry earth. At an inch in, the cinnamon has transitioned to black pepper and a faint sweetness still remains in the background. The third wraps up with musty cedar with some black pepper and faint sweetness. The strength was slightly below medium.
Seth: The first third begins with some cream, light pepper spice, sweet hay, honey and cedar. The cedar wood notes are present on the finish, and they add a little kick to the cigar. It is a medium body and strength cigar.
John: Bread and hay open the first third, with sweet baking spices finishing the draw. The retrohale consists of all the flavors previously mentioned, but balanced in strength. By the 15 minute mark, chocolate comes through on the retrohale. By the halfway point, baking spices at medium strength settle on the post draw, as some creaminess joins the retrohale. In the bottom half, wood moves into the center of the profile, bringing with it some mild dryness.
Jiunn: The first third gives a flavorful and balanced profile. Toasted cedar, nuts, cedar, bread, citrus and a nice “more than typical” black pepper spice. Retrohaling is that much sweeter and spicier, but still well balanced. The finish is pretty clean with nuts, cedar and lasting black pepper spice. Strength and body is medium. 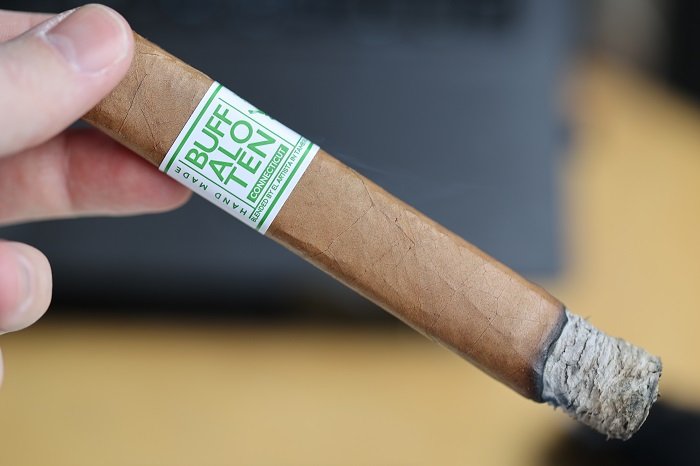 Aaron: As the second third begins, the cedar gains a light toast and the sweetness has departed. At a half inch in, the black pepper is very mellow. The retrohale is now light musty cedar and dry earth. As the third comes to a close, the profile is musty, lightly toasted cedar and mellow black pepper. The strength in this third bumped up to medium.
Seth: The second third delivers a very creamy and cedar flavor profile. I am picking up some hay notes with that, and it has a short finish. There are very light spice and sweet notes present. I would classify the cigar as just under medium in strength and body.
John: Bread, baking spices and wood carry the cigar into the second third, with creamy wood and baking spices to finish the draw. As the second third settles in, chocolate joins the retrohale again.
Jiunn: The second third shows a similar vibe as the first third. The profile is still fairly balanced with toasted cedar and nuts. There’s more black pepper influence now, but the spice isn’t spikey. Strength and body continues to be medium. 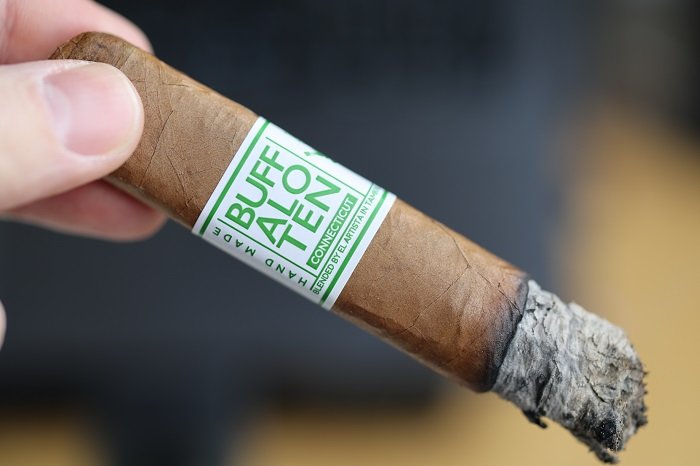 Aaron: As the final third begins, the toast level picks up and a light bitterness joins the profile. The retrohale is now musty, toasted cedar and dry earth. At an inch in, the toast level is fairly heavy and a vegetal note has joined in which is carrying the light bitterness. The cigar wraps up with musty, heavily toasted cedar, a vegetal note carrying a light bitterness and mellow black pepper. The strength remained at medium.
Seth: The final third is fairly like that of the second third. I am picking up strong cream and cedar notes, and it has touches of hay. There are some honey sweet qualities on the finish, but they are soft. No spice present. Just under medium in strength and body.
John: Baking spices, wood and chocolate get things started in the last third, with a sharp wood finish, and dry wood into the post draw. As the last third settles in, some hay moves into the middle of the profile. Baking spices and wood are driving the profile by the halfway point.
Jiunn: The final third picks up a staleness in nuts, cedar and burning paper, which lengthens the finish by quite a bit. This, in turn, decreases the enjoyment of the cigar. Strength and body finishes the same medium. 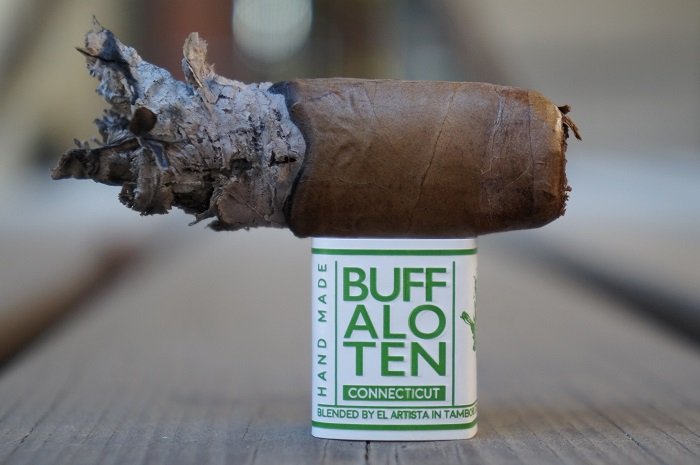 Aaron: The burn line was a bit wavy at times, but always self corrected. The ash held on in inch and a half increments.
Seth: Solid burn from start to finish.
John: The burn was slightly uneven to start, but corrects itself. Ash holds on up to 1-1/2 inch increments. No interventions required.
Jiunn: Picture perfect burn performance. Even burn, tight ashes, cool burning temperature and ample smoke production. 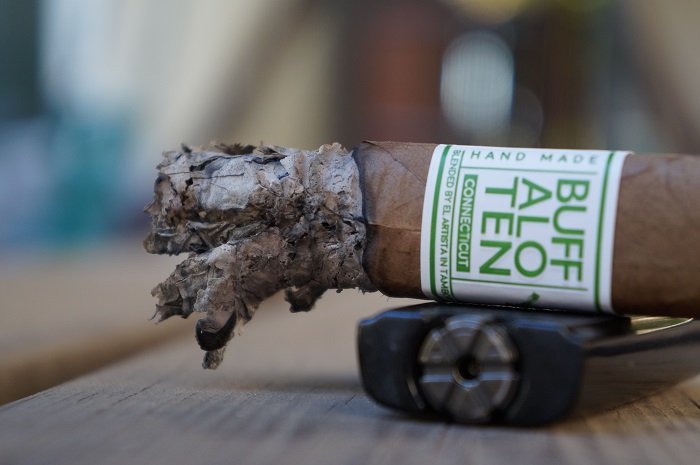 Aaron: The cigar had a profile that started with aged cedar and light amounts of cinnamon and sweetness and then the cinnamon transitioned into black pepper and the sweetness left. Some mustiness joined in and later a vegetal note with light bitterness. Construction was very good. The El Artista Buffalo Ten Connecticut started with a nice combination of flavors and then settled into a fairly average profile from the second third on. The cigar carries a very budget friendly price tag and the delivery matched up well with that price. I might not come back to it often, but it’s not a bad Connecticut shade offering. The pressed shape also carries a nice mouthfeel. This cigar is right on par with the original release in the line with the Mexican wrapper and I think this is an offering that could do quite well for the brand.
Seth: The El Artista Buffalo Ten Connecticut is a cigar that has a decent flavor profile and terrific price, but not mind blowing by any means. I could smoke these in the morning with some coffee, but it would not be one of those experiences where I put everything aside. I will still do stuff in the garden and with the birds. But that is what you expect with a $5.00 cigar. Very creamy at times, and the honey sweetness is enjoyable. Surprised by the lack of spice, and I am torn on its departure.
John: The El Artista Buffalo Ten Connecticut delivered interesting, balanced and engaging flavors for the first and second third, leaving a pleasant but less dynamic profile in the last third. Burn was perfect and the draw had some minor resistance to it. With a 2 hour 11 minute smoking time, at a $5 price point, I’m not sure what more you could ask for from a Connecticut blend; these should be flying off the shelves.
Jiunn: $5 for an overall flavor profile that is good. This equates to buy, buy, buy. If you like all the great softer flavor notes in a good Connecticut shade with a bit more spice, the El Artista Buffalo Ten Connecticut is no doubt for you. Even if you don’t, I think you should buy a fiver for only $25 to try it. Big flavors, small hit to the wallet. You really can’t beat that.