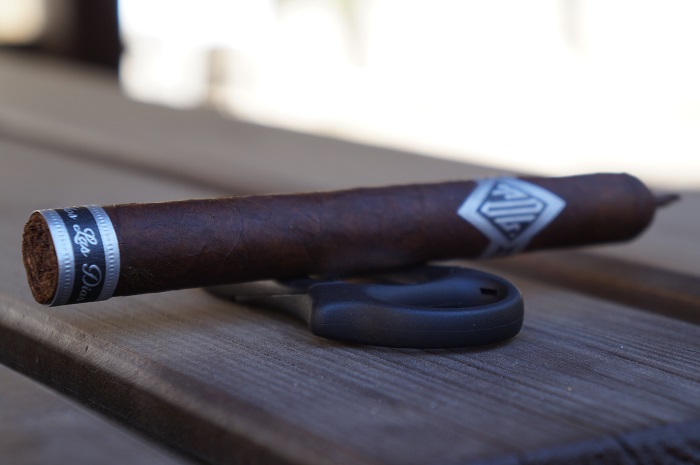 The wrapper is milk chocolate brown with some darker marbling. Some slightly raised veins are present down the back side of the cigar. The seams are smooth but easily visible due to the wrapper color variation and vein placement. The head is finished off with a thick quarter inch long twisted stump. There are two bands, both in a black and silver color combination. The primary is diamond shaped and carries the initials of the line while the foot band has the line name spelled out. The aroma from the wrapper is slightly damp wood and earthiness while the foot brings more wood and some dry earthiness. The pre-light draw brings creamy leather and wood with a mild spice on my lips. 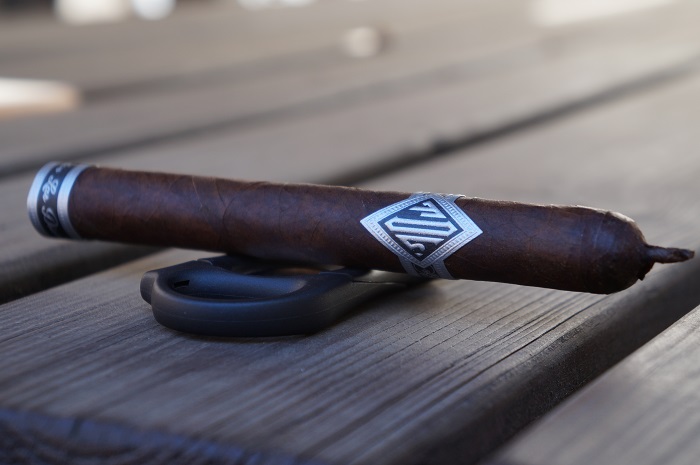 The Dunbarton Tobacco & Trust Todos Las Dias Mas Fuerte Thick Lonsdale is great in terms of construction. It is firm throughout and is finished with a well applied cap and a nice pigtail. The wrapper has some dark Colorado aspects to it but is also showing some Maduro qualities. It has a nice, dark chocolate brown coloring with hints of dark red also. There are a number of veins present throughout and they are noticeable to the touch with the oily and gritty wrapper. The foot of the cigar is showing qualities of rich earth, dark chocolate, baking spices and leather while the wrapper is giving off qualities of subtle barnyard, damp earth and wood. 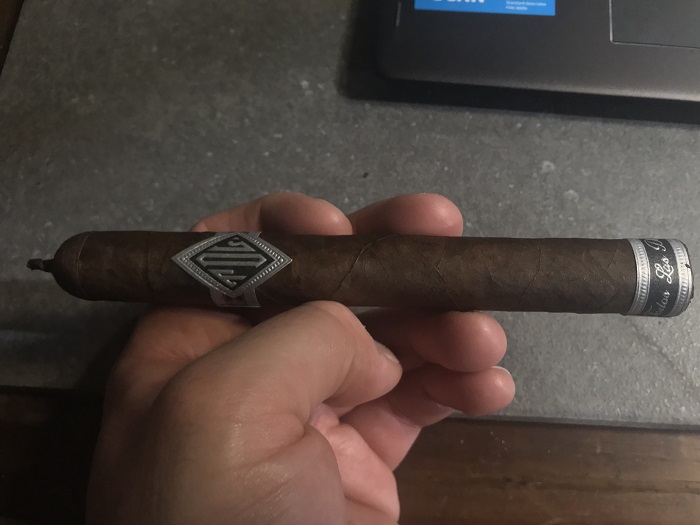 The Dunbarton Tobacco & Trust Todos Las Dias Mas Fuerte Thick Lonsdale has an embossed silver and black band with a secondary ‘Todos Las Dias’ band. The cigar has a nipple cap with tail, and the wrapper is dark chocolate color. The wrapper has aromas of baking spices and earthy leather. The foot has an intense sweet raisin with stewed plum. 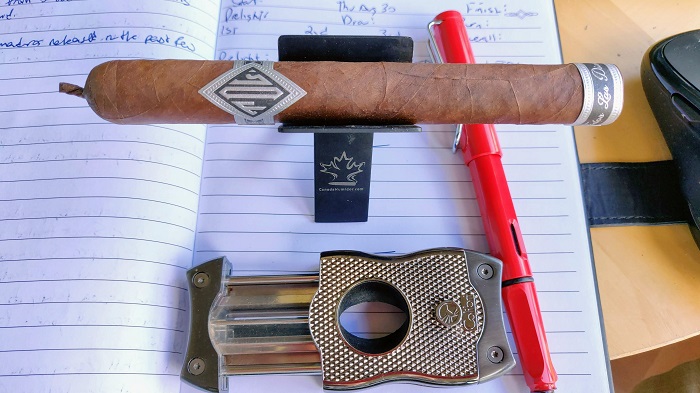 The cigar begins with a mix of cinnamon and cedar. At a quarter inch in, some cream joins the profile to smooth things out a bit. At three quarters of an inch in, the cinnamon has transitioned to a mild baking spice which has moved into the background while the creamy cedar is up front. At an inch and quarter the creamy note seems to be subduing the flavors beneath it like the cedar, baking spice and new addition of some cocoa. Right before the end of the third, the profile sheds the masking profile of the cream and the flavors become much fuller. The strength in this third was right at medium. 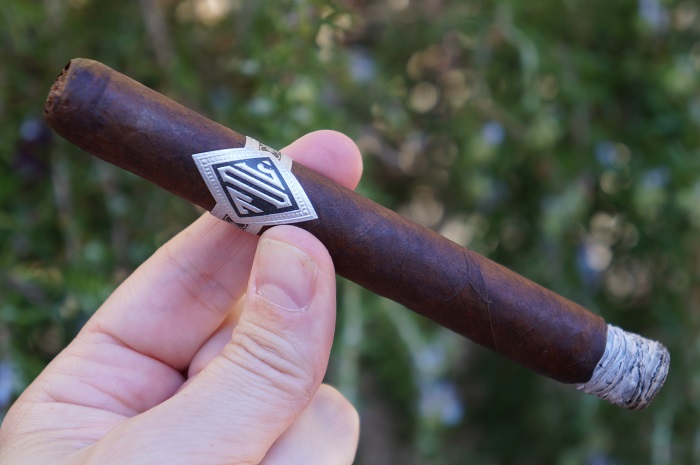 The cigar starts out by delivering a nice combination of soft red pepper notes with some coffee beans and dark chocolate. There are some earth and toasty qualities present with that, and there is a meatiness on the finish. I would classify the cigar as being medium-full in strength and body, and the flavors are right at a medium-full level as well. 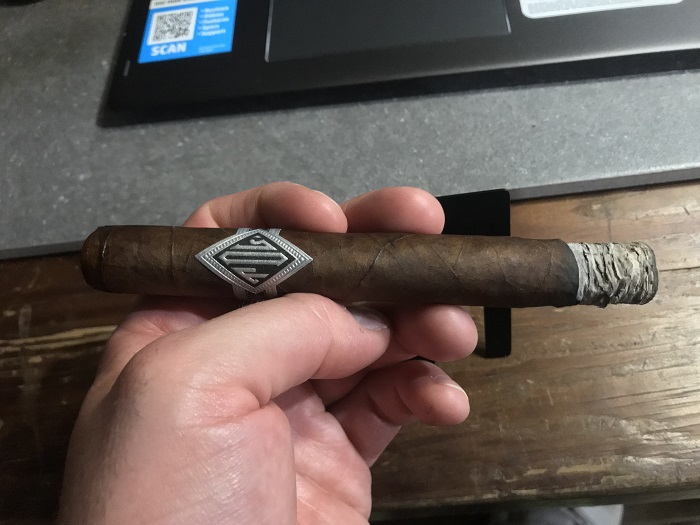 On the first few puffs, I taste creamy leather that lingers on the post draw, finishing with rich medium plus spices and a syrupy sweetness. As the cigar progresses, some medium minus pepper joins the mix and carries into the post draw as well. At the 10 minute mark, some cocoa mixes in with the spices as the spice and pepper pull back in intensity. The profile settles into a sweet and creamy cocoa with balanced spices and mild leather on the post draw. 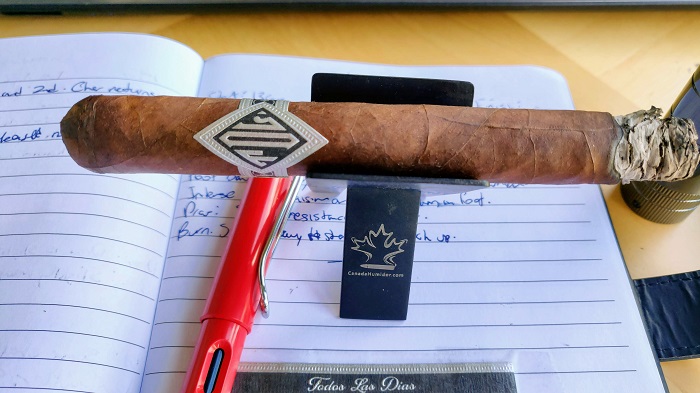 As the second third begins, there are full amounts of cedar and cream with supporting notes of baking spice and black pepper. At a quarter inch in, a subtle cocoa note returns to the profile. The retrohale carries a full charred and creamy wood note. At three quarters of an inch in, the char makes it to the mouth draws combining with the wood and cream which has transitioned over from the cedar. There is still a slight cocoa hanging on in the background along with some baking spice. As the third comes to a close, the char has increased a bit on the creamy wood. The faint notes in the background have all gone away. The strength in this third bumped up to slightly above medium. 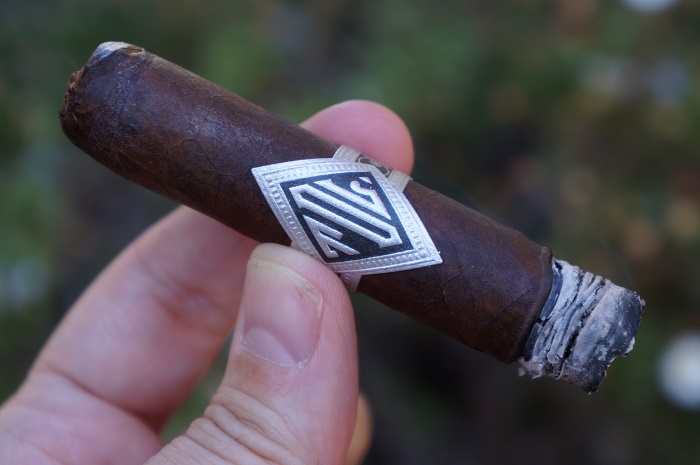 When I get into the second third of the cigar, I find there is an increase in the spice level and the red pepper notes are more pronounced. There is a nutty like quality present, almond like, and it is paring with the coffee bean, chocolate and toast qualities quite well. It is still showing that barnyard quality of damp earth and wood as well, and it is complex and filling. The cigar is still smoking at that medium-full level for strength and body, and the same goes for flavors. 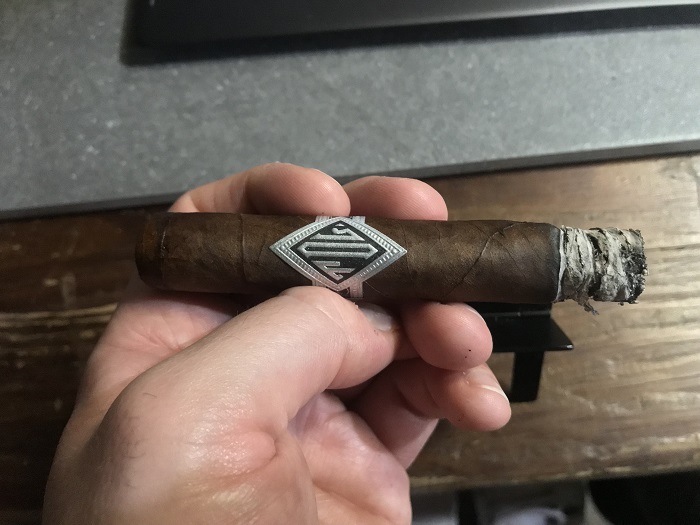 As the Todos Las Dias transitions to the middle third, some nuttiness joins the flavor profile, as a significant amount of nicotine strength hits home. The nuttiness settles in to balance the cocoa, delivering a chocolate bar like experience. Once the middle third has settled in, some sweet cedar joins the profile, with the spices falling to a background flavor note. 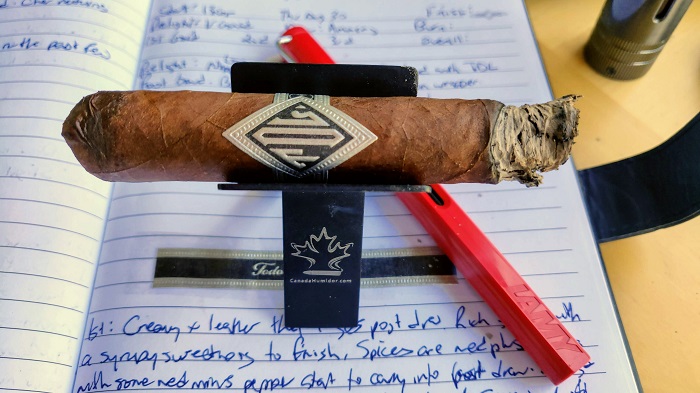 As the final third begins, the charred and creamy wood continues on. At three quarters of an inch, the profile gains a bit of meatiness. The retrohale carries a slightly charred oak note with a bit of the meatiness. As the third comes to a close, the cream increases a bit to create a fuller profile to go along with the charred wood and slight meatiness. The strength in this third bumped up to medium-full. 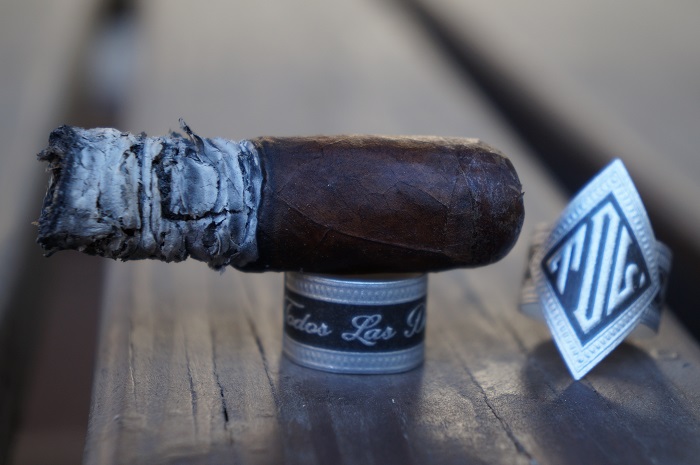 I am in the final third of the cigar now and like the transitioning into the second third, there is a change in profiles when I get into the final third. It is showing a lot of black coffee notes and is paired with toast and woody qualities. There is a touch of dark chocolate to that and the finish is that of soft spices. It is smoother and softer in this third, and I would classify the cigar as being between medium and medium-full in terms of body, strength and flavors. 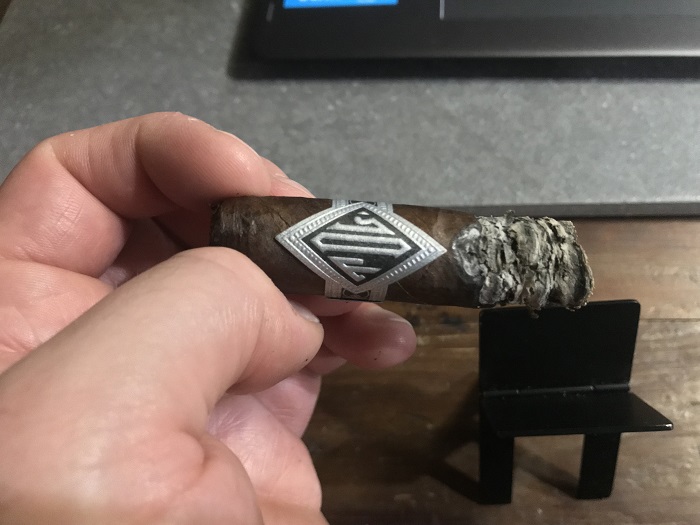 In the final third, the nuttiness fades as a toasted character moves into the profile. There is still a great sweet creaminess that defines the rest of the smoking experience. 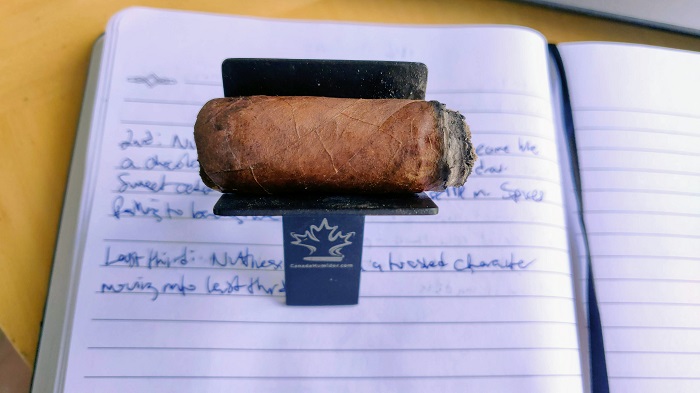 The burn line was a bit wavy throughout and the cigar went out once in the second third requiring a re-light. The ash held on in just over one inch increments. 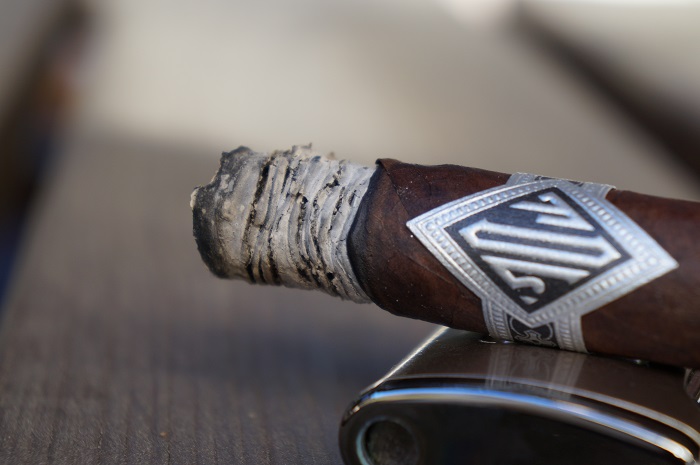 In terms of construction, the cigar was constructed wonderfully. It had a very even burn line from start to finish, nearly perfect at times and with that was a great looking ash that was light gray in coloring. The ash held on firmly throughout and never fell from the cigar. 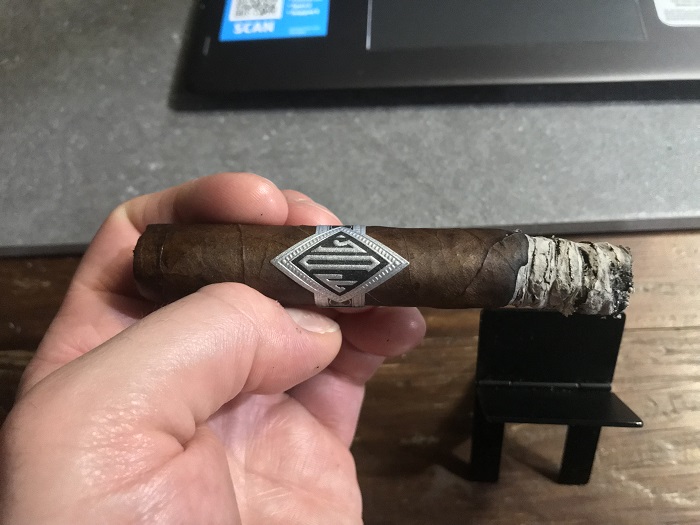 The burn is slightly wavy, requiring a touch-up in the first third. The ash holds on well in 2+ inch increments. At the middle third, the cigar goes out requiring a re-light. 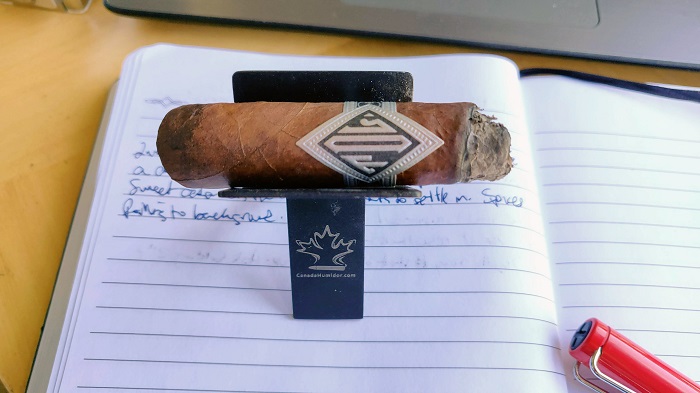 The cigar started with cedar, baking spice and cream and in the first third had a section where everything was masked/subdued by a cream note. That went away and the profile came back and moved to a charred wood note. Construction was pretty good and didn’t require much attention. The story of this blend is that it was a mistake by the factory and made a bit stronger than the other vitolas in the line. For this cigar, I feel like this blend change did bring a stronger profile, and with that took away some of the nuance and enjoyment from the profile. I would prefer to return to some of the previous vitolas, but could see going to this if I’m looking for something a bit stronger.

The draw was to my liking and was never too loose or tight. I thought the cigar smoked cool from start to finish and you could not ask for more from a cigar.

I have had a good number of these and have been smoking them off and on since IPCPR in July. I loved them when I first smoked them, I thought they had a great strength and body level that was pairing well with the rich, dark and strong flavors, but I feel that the cigar has changed quite a bit in the time since I first smoked it. In just a couple months, I feel that the cigar has lost that fresh punch which I thoroughly enjoyed. It is still a really good cigar, one of the best new releases showcased at the show, but it is not what it was. I would be interested in smoking them when they were new on shelves and straight from the factory, seeing if that lines up with my thoughts on them based off the IPCPR offerings I have had. I wonder if this is a cigar that I care for when it is young, and don’t bother to hold onto or age. It hasn’t been aging that long, I wouldn’t even classify what I have done as aging, but it is not the same cigar in my opinion. It has lost something. With that being said, the flavor profile was darker and to my liking, and this vitola offering is a great addition to the line. I think the consumers who are fans of Todos Las Dias will really enjoy the Dunbarton Tobacco & Trust Todos Las Dias Mas Fuerte Thick Lonsdale, and I would say it is my favorite size as well.

Using a v-cutter, the draw is perfect with a slight resistance.