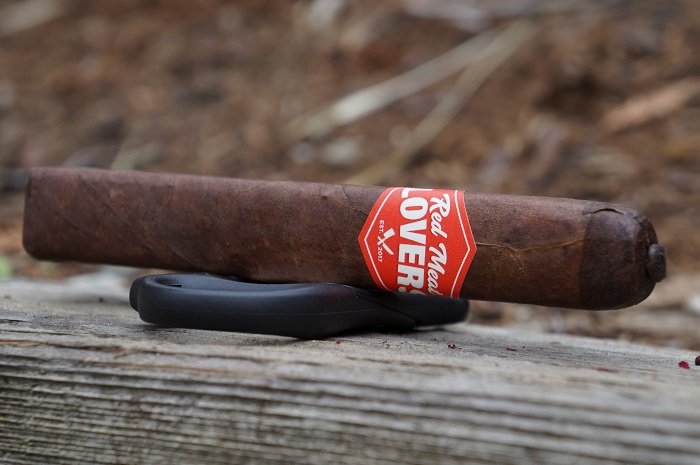 Aaron: The rectangle pressed Dunbarton Tobacco & Trust Red Meat Lovers 2020 is covered with a marbled medium brown wrapper that has some thick but well pressed veins. The seams are easily visible as they are slightly raised in some areas while the caps are very well applied and there is a small pigtail finish. The band is the same red and white band as the previous release. The aroma from the wrapper is a sweet campfire smokiness, while the foot brings sweet hay. The pre-light draw brings some grittiness along with a light, sweet cedar. There is also a mid-level spiciness on my lips.
Seth: Finished with a lovely press, the Dunbarton Tobacco & Trust Red Meat Lovers 2020 sports a dark Colorado wrapper that has some crystallization here and there. The veins present are medium in size, and the texture has this finely shaved wood finish. The cigar is slightly firm throughout and I am picking up aromas of mesquite BBQ, leather and tobacco on the wrapper with foot notes of rich earth, chocolate chips and dried meat.
John: The Dunbarton Tobacco & Trust Red Meat Lovers 2020 has a firm box press shape, and firmly pressed veins are visible across the surface of the wrapper. The cigar is cellophaned, but lacks a UPC or identifying sticker. Additional complications included a pressed pigtail cap. Aromas from the cigar included fresh cut wood, with faint barnyard underneath. There were no additional aromas from the foot.
Jiunn: The Dunbarton Tobacco & Trust Red Meat Lovers 2020 has an even Colorado Maduro and in some light, Colorado Red wrapper shade. Veins are well pressed, seams tight, bunch and roll even and firm and head well wrapped. Aromas from the wrapper give a mixture of white pepper and black herbal tea. Aromas from the foot give the same but with added intensities. Cold draw tells dry cocoa with cinnamon on the tip of the tongue. 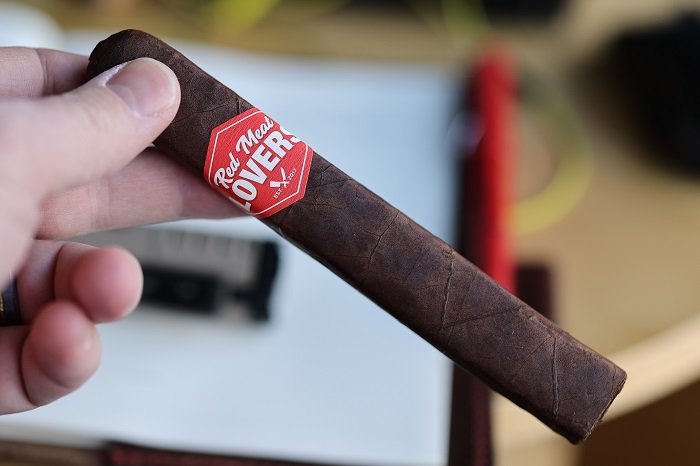 Aaron: The cigar begins with a mix of wood, mustiness and cinnamon. At a half inch in, the cinnamon has mellowed a fair amount and the wood has become more defined as oak. The retrohale is lightly musty oak. At an inch and a half in, the cinnamon morphs into a general baking spice and picks up a bit in fullness. As the third comes to a close, the oak gains a toasted note while the mustiness and baking spice are right behind. The strength in this third is slightly above medium.
Seth: The first third opens with some raisin and currant notes that are paired with some herbal qualities. I am picking up some rich earth and cocoa note as well, and the finish has this wood, leather and cured meat quality. It is medium to medium-full in strength and body, and flavor focused. Nice NACSA release.
John: Leather and cedar flavors greeted me in the first third. Some mild wood takes up the center of the profile, as a light plus baking spice develops, accenting the other flavors. Black pepper comes in and out of the retrohale. By the 10 minute mark, a general creaminess has joined the retrohale. The profile remains fairly consistent through the remainder of the first third.
Jiunn: Cocoa is the main driver of the first third. Past the cocoa, roasted coffee beans, minerals and cedar can be found. Retrohaling tells a nice mixture of creamed cherry soft candy and baking spices. For Connecticut broadleaf, the finish is surprisingly refined, with namely a lingering cedar. Strength and body is medium. 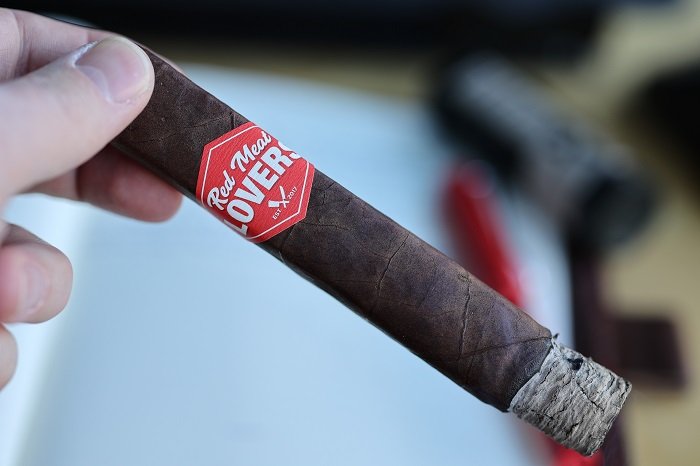 Aaron: As the second third begins, the toasted oak and mustiness are even while the baking spice is in the background. At a half inch in, some dry earth joins the profile and the baking spice has transitioned to black pepper. At an inch in, the musty and toasted oak, dry earth and black pepper are all even. The retrohale is musty oak and dry earth. At an inch and a quarter, the toast on the oak becomes quite heavy. As the third comes to a close, the musty and toasted oak and dry earth are even while the black pepper is in the background. The strength in this third has bumped up to medium-full.
Seth: The second third delivers a flavor profile that has seasoned meat and coffee bean notes. I am getting those herbal qualities, currants as well, but it is predominately that meat and coffee flavor. There are some earth, leather and cream note as well, and this is a balanced blend that delivers complexity and transitioning. In terms of strength and body, just above medium.
John: The second third starts with creamy baking spices and leather undertones with a spicy wood finish. There are no other flavor changes through the second third, but I was completely okay with that.
Jiunn: The flavors become fuller and bolder in the second third. While it’s still mainly cocoa dominant, the minerals and cedar show up more. Also, the finish picks up a light charred roasted nuts to the same cedar. Strength and body is still for the most part medium. 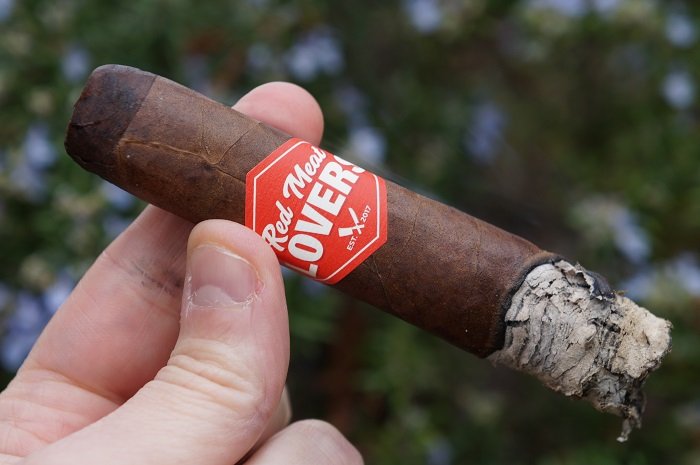 Aaron: As the final third begins, the toasted oak has a very long finish. At a half inch in, the toast level has become a light char. The retrohale remains musty oak and dry earth. The cigar wraps up with the musty, charred oak and dry earth even with light black pepper in the background. The strength remained at medium-full.
Seth: The final third shows some transitioning, and I am picking up those stone fruit notes with some sweet spices. I am getting some cinnamon and red pepper. There are some coffee and cream qualities present as well, and I am getting bits of coconut shavings with that. There are some meaty and leather qualities also, but they are on the finish. In terms of strength and body, I would classify the cigar as medium-full.
John: Citrus and tannic cedar lead the cigar into the last third. There were no other noteworthy flavor changes through the last third.
Jiunn: The final third flavor mix has no changes from the second third. Cocoa, minerals and cedar are still the same players. Strength increases to medium-full, while body finishes the same medium. 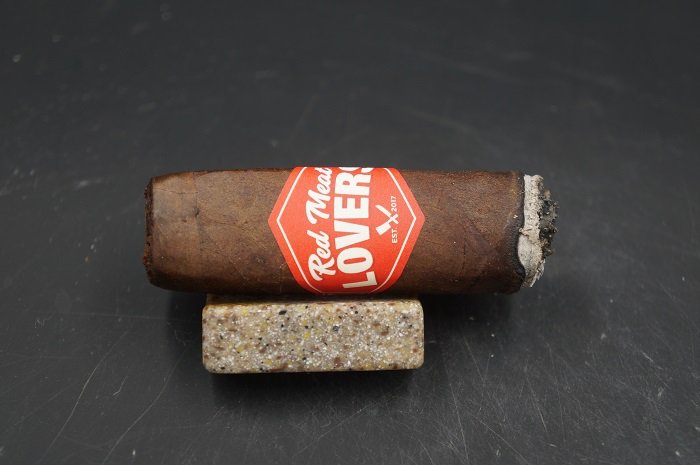 Aaron: The burn was a bit wavy throughout, but always maintained itself. The ash held on in inch and a half increments.
Seth: Burn was very good throughout. Never perfect, but no problems at all.
John: The burn was fairly straight through the review, with the ash holding on up to 1-1/2 inches at points. The burn was uneven in the second third, requiring a touch-up.
Jiunn: Burn performance was perfect. Even burn, tight ashes, slow burn and cool burning temperature. 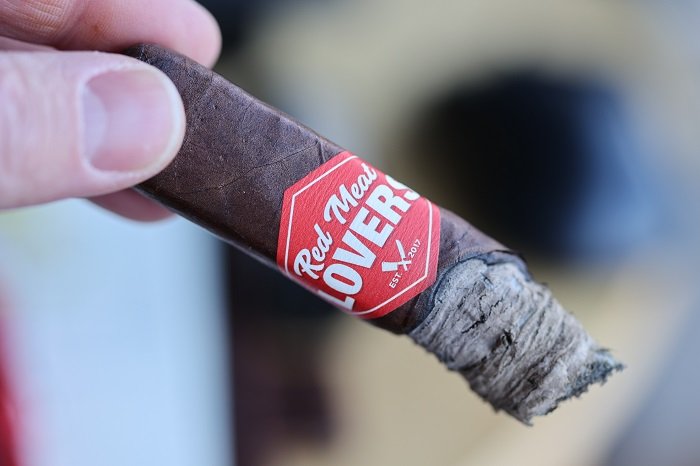 Aaron: The draw was perfect, with just the right amount of resistance that I prefer.
Seth: Perfect draw from start to finish.
John: The draw had some resistance to it, roughly 2-1/2 notches into the resistant spectrum. However, I was able to get satisfying amounts of smoke production with each draw.
Jiunn: The draw was a bit snug, but in the long scheme of things, a non-issue.

Aaron: I liked how the cigar started with the oak, cinnamon and mustiness, but as the cinnamon morphed to baking spice and then black pepper and the oak gained a toast note, the profile became fairly average and maintained that level the rest of the way. Construction was great and just allowed me to focus on flavor. The Dunbarton Tobacco & Trust Red Meat Lovers 2020 was a bit of a step up from the previous release, but still not something I’d see myself coming back to frequently. If the first third could have maintained itself a bit further, it might make it into that category.
Seth: I was pleased with this Dunbarton Tobacco & Trust Red Meat Lovers 2020 and thought it showed depth and transitioning. This was a complex blend that showcased and benefitted from the tobaccos being used, wrapper to filler. This might be one my favorite Saka blends to come out of NACSA. The strength and body were perfect with the flavors, and the flavors offered something new each third. The stone fruit, coffee and sweet spice flavors took leading roles, but it was the changing notes of coconut shavings, cream, cocoa and leather throughout that made the cigar pop. I am not a huge fan of box-pressed Toros, and 52 ring Toros, but this is one I would smoke often. Now, if this were made in the Thick Lonsdale format like Saka did with Todos Las Dias, we would be in business.
John: The Dunbarton Tobacco & Trust Red Meat Lovers 2020 is a shining example of how you can blend a cigar that isn’t necessarily the most complex release on the block, and yet still provides an enjoyable, consistent, engaging experience. This year alone, I’ve smoked cigars that were double the price of the Red Meat Lovers 2020, that I enjoyed half as much. I would smoke these again if given the opportunity. Total smoking time was 2 hours and 8 minutes.
Jiunn: Man, it’s been a minute since I reviewed a good cigar. Can I get a freakin’ amen?! The Dunbarton Tobacco & Trust Red Meat Lovers 2020 is a proper Connecticut broadleaf with a baseline of cocoa and some nice added earthiness in roasted coffee beans, minerals and cedar. All this with a great burn and draw performance. I hope this trend of reviewing good cigars stands up, but I highly doubt it.