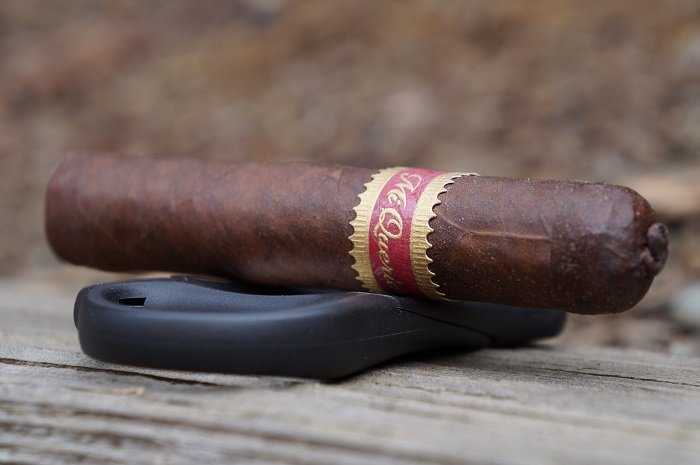 Aaron: The wrapper on the Dunbarton Tobacco & Trust Mi Querida Triqui Traca No. 448 is a marbled dark brown and has some lightly raised veins present. The seams are a bit raised while the head is finished off with a tightly would pigtail. The band is the traditional red and gold design for the line. The aroma from the wrapper is damp wood, bakers chocolate and light spice. The foot brings cedar and stone fruit sweetness. The pre-light draw brings an aged cedar note along with a mild spiciness on my lips.
Seth: Finished with a nice Colorado Maduro wrapper, this Triqui is not lacking in the Traca department. Nice reddish brown clay coloring. The wrapper is smooth in texture, and there are few oily qualities present on the wrapper. The Dunbarton Tobacco & Trust Mi Querida Triqui Traca No. 448 is firm throughout and there are medium sized veins present as well. Aromas of chocolate cake, licorice, rich earth, spices, cherries and damp tobacco. Black Forest Cake comes to mind.
John: The Dunbarton Tobacco & Trust Mi Querida Triqui Traca No. 448 comes in cellophane, and does not have a UPC sticker. For additional complications, the cigar has a curled pigtail cap. Aromas from the wrapper included fermented tobacco and wood. From the foot, there was sweet tobacco and light chocolate.
Jiunn: The Dunbarton Tobacco & Trust Mi Querida Triqui Traca No. 448 has an even Colorado maduro wrapper shade. Veins are well pressed, especially for broadleaf, seams tight, bunch and roll even and head well wrapped and capped. Aromas from the wrapper give quality, rich cedar. Aromas from the foot tell a good amount of white pepper spice, followed by cedar. Cold draw gives cedar and hay. 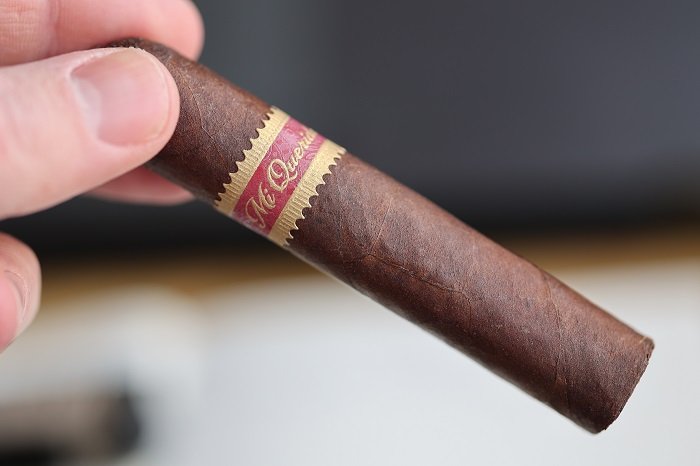 Aaron: The cigar begins with musty, toasted oak and baking spice. At a quarter inch in, some dark earth joins the profile. At a half inch in, some light cocoa powder appears while the baking spice transitions to black pepper. The retrohale is musty, toasted oak, black pepper and light earth. As the third comes to a close, the profile is musty, toasted oak and dark earth up front with black pepper a bit behind and light cocoa in the background. The strength was slightly above medium.
Seth: The first third starts out with lovely earth and leather notes. I am picking up spice qualities and it has a light roasted coffee vibe. The finish is that of cedar and subtle cocoa flavors. Medium in strength and body.
John: Sweet wood starts the first third off. There is some delayed baking spices and wood that hit on the post draw some time after the draw finishes. The post draw spices rapidly move up to medium-full intensity. As the cigar progresses, sweetness on the retrohale takes on a more complex syrupy character.
Jiunn: This is no doubt quality broadleaf. I get the goodness of a medium-full viscous body with plenty of cocoa and a tad sweetened milk chocolate. But what I also get, is a little heat coming through off some dry red pepper spice as well as barnyard funk. Retrohaling brings all the spice though, with minimal chocolate tones. The finish is gritty with dry dirt and spicy cedar. Strength is medium-full and body is medium. 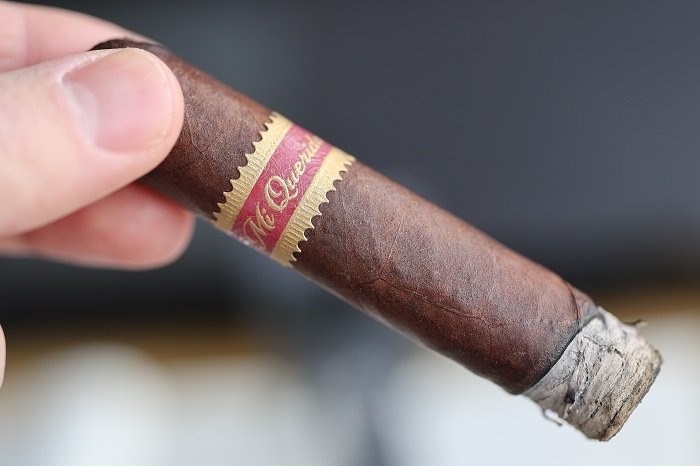 Aaron: As the second third begins, the pepper mellows while the cocoa departs. At a quarter inch in, the pepper has also departed. At a half inch in, a light carboard note has joined the profile. The retrohale is now musty, toasted oak and dry earth. At three quarters of an inch in, the cardboard note departs. As the third comes to a close, the profile is musty, toasted oak up front with dry earth a bit behind. The strength in this third dropped down to medium.
Seth: The second third delivers a flavor profile of coffee, leather and earth. There are those spice notes from before, and I am picking up subtle cocoa and graham cracker notes on the finish. Medium in strength and body.
John: Sweet wood opens the second third as well, with wood and baking spices combining into the post draw. Some chocolate and mild earth join the retrohale as it settles in. The post draw spice is still medium, almost medium-full, lingering almost the entire time between draws.
Jiunn: The second third adds a milkier and sweeter chocolate note to the overall profile. But the other notes still exist, such as the red pepper spice and barnyard funk. Strength and body is unchanged at medium plus and medium, respectively. 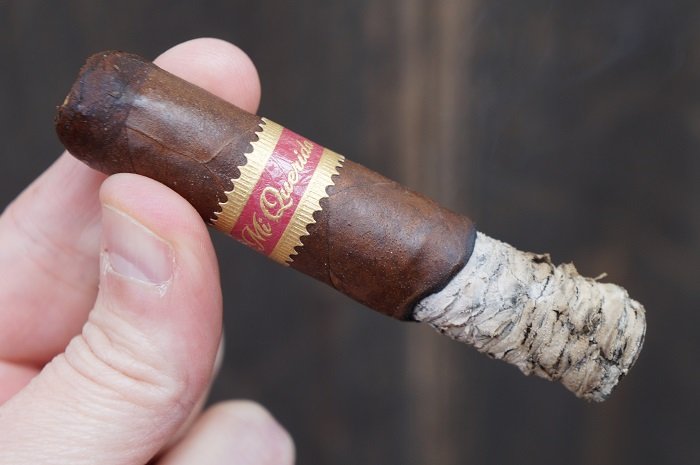 Aaron: The final third continues on with the musty, toasted oak and dry earth. Ay a half inch in, a light creaminess joins the profile. The retrohale is musty, toasted oak and light, dry earth. At three quarters of an inch in, the toast level picks up a bit and a mild black pepper rejoins. The cigar wraps up with a profile of musty, toasted oak up front with dry earth, creaminess and black pepper in the background. The strength remained at medium.
Seth: The cigar finished by delivering those earthy, wood, leather and spice notes. There are some subtle coffee qualities, but the cocoa has faded completely. Like before, the cigar is medium in strength and body.
John: Baking spices at the forefront at medium strength with molasses and wood. The baking spices and wood begin to linger into the post draw. As it progresses, it becomes wood forward for the remainder of the third.
Jiunn: The final third picks up a lasting heat (temperature heat) as well as a general sharpness in spice and minerals. The chocolate, cedar and barnyard funk is still there, but the aforementioned heat and sharpness prevails. Strength and body is still unchanged at medium-full and medium. 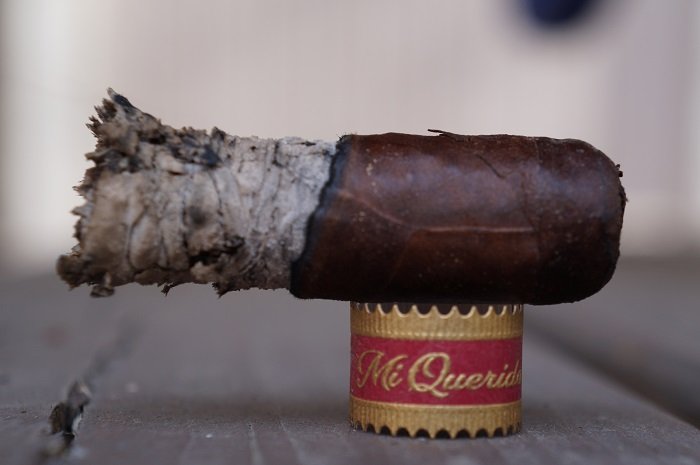 Aaron: The burn was straight the entire way. The ash held on to the halfway point and then again until the end.
Seth: Very nice burn from beginning to end.
John: The burn is straight for the first third, becoming offset at the end of the first. The burn quickly corrects itself and is straight for the remainder of the review. Ash holds on for longer than I would have thought for a cigar of this size, up to 1-1/2 inches.
Jiunn: Burn performance was very good. Just a random re-light. Aside from that, picture perfect. 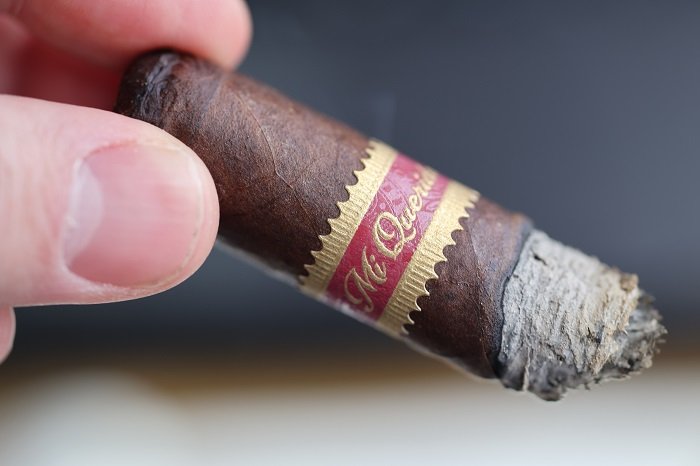 Aaron: The draw was perfect, with just the right amount of resistance that I prefer.
Seth: Perfect draw.
John: The draw is quite resistant, roughly 3-1/2 to 4 notches into the resistant spectrum.
Jiunn: The draw was great, giving the best balance between air flow and resistance.

Aaron: The cigar began with musty, toasted oak and baking spice. Some dark earth joined in fairly quickly as well as some cocoa powder while the spice transitioned to black pepper. The second third saw the pepper and cocoa depart and a cardboard note join in for a bit. The final third saw some creaminess and black pepper join. Construction was perfect. The Dunbarton Tobacco & Trust Mi Querida Triqui Traca No. 448 started well with rich flavors. The second third lost some complexity and added a cardboard note which dropped the profile down a level, but the final third picked back up in enjoyment. The cigar didn’t maintain the richness of the profile that I remember from previous vitolas, but it still sandwiched enjoyable thirds between an average middle third. Definitely a cigar I’d be up for smoking more of.
Seth: The Dunbarton Tobacco & Trust Mi Querida Triqui Traca No. 448 might be an improvement over the No. 552, but I still think the line is too one dimensional and lacking. There is very little complexity throughout, and it comes off as a line that is just unloading some coffee, leather and earth qualities on your palate. I understand the wrapper is Corona priming, and that takes it up a notch in strength and body, but I think that is one of my big issues with the line. I enjoyed Mi Querida, so I did not need the line to be “upgraded” or blended to be stronger and fuller.
John: The Dunbarton Tobacco & Trust Mi Querida Triqui Traca No. 448 was quite a medium-full power house of complex flavors, catching me off guard given it’s short length. The last third didn’t manage to maintain the same level of complexity, but the rest of the cigar certainly made up for it. The burn was perfect, with the draw being into the resistant spectrum. Steve Saka delivering a winner here with a 1 hour and 15 minute flavor treat.
Jiunn: The Dunbarton Tobacco & Trust Mi Querida Triqui Traca No. 448 is a nice smoke that can either get you shorter 30-45 minutes to get through, or you can take your time to get it in between 60-70 minutes. A proper broadleaf, showing plenty of chocolate notes and barnyard funk, but with added spice. Will be an easy add into the rotation.