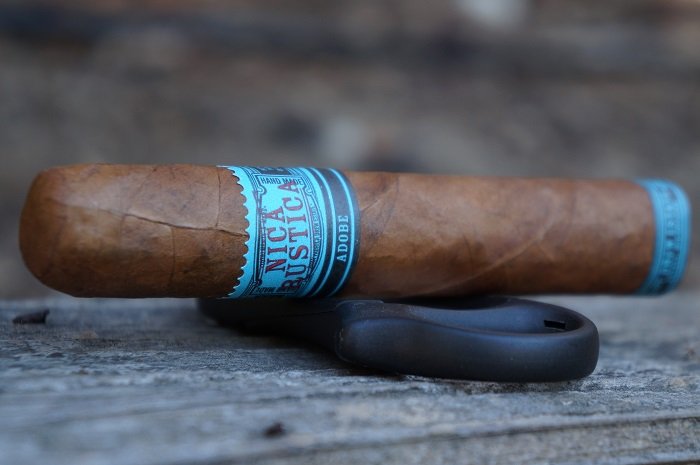 Aaron: The wrapper on the Drew Estate Nica Rustica Adobe Robusto is light brown with some slightly darker marbling in areas. There are some raised veins present and the cigar is a bit lumpy, but the seams are smooth and the caps well applied. There are two bands, both in an aqua and black color combination. The primary denotes the brand and sub-brand, while the foot denotes the company and location of manufacture. The aroma from the wrapper is cedar, earth and hay while the foot brings floral notes, stone fruit sweetness, cedar and mild spice. The pre-light draw brings an airy mix of floral notes and cedar along with a mild spiciness on my lips.
Seth: The Drew Estate Nica Rustica Adobe Robusto is finished with a wrapper that is oily in texture, bumpy and veiny throughout. Not great in apperance, but it has a lovely color. beautiful red clay color. Aromas of minerals, musty wood, dry earth and spices.
John: The Drew Estate Nica Rustica Adobe Robusto comes in cellophane and has a UPC sticker that tears in half when opened. Surprisingly, at this price point, the cigar is double banded with the secondary band at the foot. Aromas from the cigar included sweet bread, wood, honey, clover and a faint nutmeg. From the foot, a sweet fig, wood and hay. 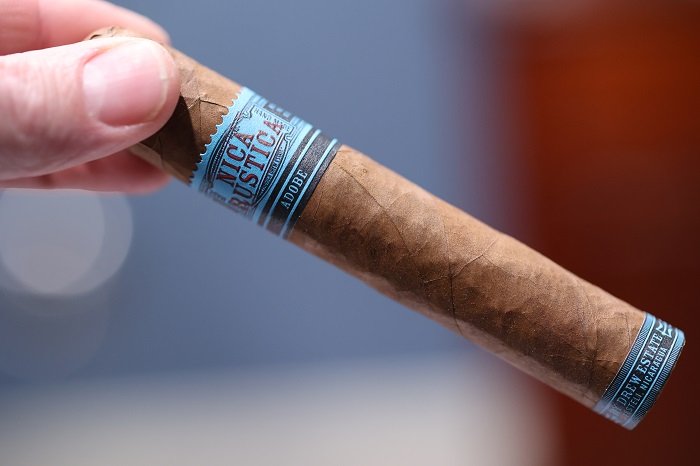 Aaron: The cigar begins with toasted oak and black pepper. At a quarter inch in, some light earth joins while the black pepper is now pretty bold. The retrohale is toasted oak and a pretty zingy black pepper. At an inch in, the black pepper has mellowed a bit. As the third comes to a close, the profile is toasted oak up front with black pepper in the middle and earth in the background. The strength was slightly above medium.
Seth: The first third starts out with some lovely qualities of musty wood, barnyard, earth and peppery spices. Dryer profile. Very rustic cigar. Medium in strength and body.
John: The initial flavors come through as sweet wood, bread, and medium spices which linger into the post draw where they combine with sweet wood. Post draw spices take on a red pepper flake at medium-full as it settles in. As the first third progresses, mild leather comes through at the end of the draw. Chocolate is present through the retrohale at medium-minus around the 15 minute mark. It reminds me of a scone with a combination of baked bread, nutmeg and cinnamon. Some nuttiness and dry wood add to the end of the draw moving towards the halfway point. 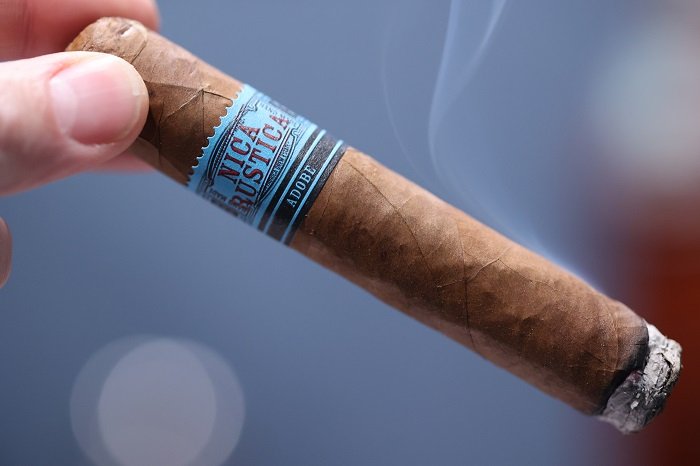 Aaron: As the second third begins, the earth increases in fullness and the black pepper becomes pretty mellow. At three quarters of an inch in, a light mustiness joins the profile. The retrohale is now an even mix of toasted oak, earth and lightly zingy black pepper. At an inch and a quarter, the toasted oak and earth are now even up front. As the third comes to a close, the toasted oak and earth are even up front with black pepper and mustiness in the background. The strength remained at slightly above medium.
Seth: The second third delivers a profile of dry wood, earth and bardnyard. Mineral and pepper spice notes present as well. Medium in strength and body.
John: Baking spices and wood combine to start here, with sweetness lingering into the post draw where the spices take over. Sweetness and wood rapidly move into the center of the profile. As the second third settles in, tannins are present at the end of the draw. Once the second third has settled in, the flavors don’t seem to find a balance with each of the components seemingly trading off throughout the second third. 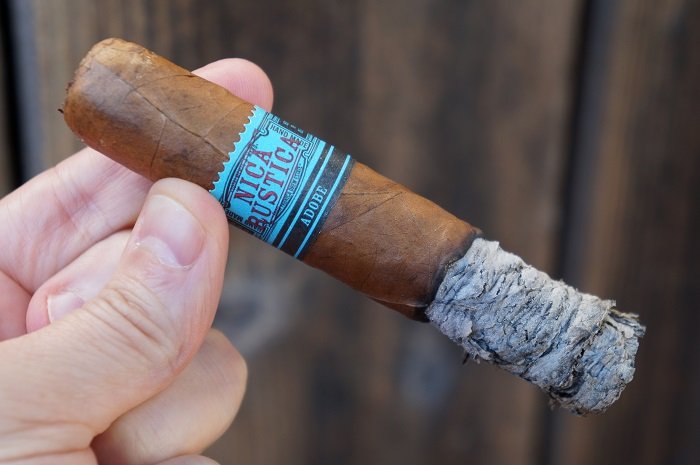 Aaron: As the final third begins, the toast level increases a bit. The retrohale is now toasted oak, earth with light mustiness and black pepper. At three quarters of an inch in, the black pepper is barely holding on while the mustiness increases. At an inch in, a vegetal note appears as the cigar warms up. As the cigar wraps up, the profile is toasted oak and earth even up front with mustiness and vegetal note in the middle and black pepper in the background. The strength remained at slightly above medium.
Seth: The final third is fairly in line with the second third. Dryer profile with these classic earth and wood notes. Mineral spices as well. Medium in strength and body.
John: The last third initial flavor impressions are spicy bread, with a tannic wood to finish. The tannins increase to medium-full intensity with some toasted earth accents. Sweet wood moves into the center of the profile as the last third settles, earth providing accents here as well. 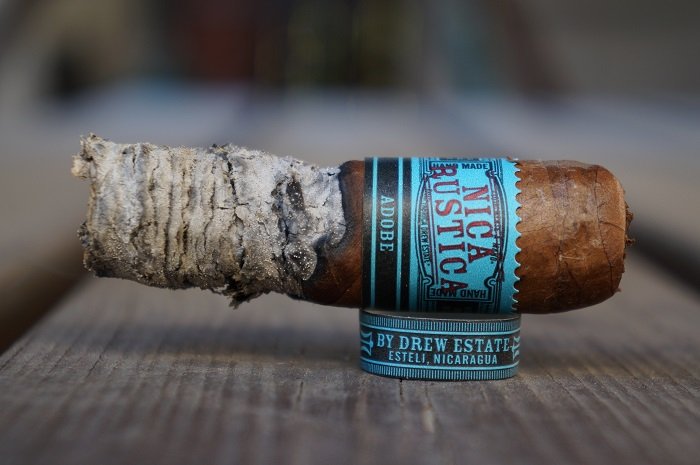 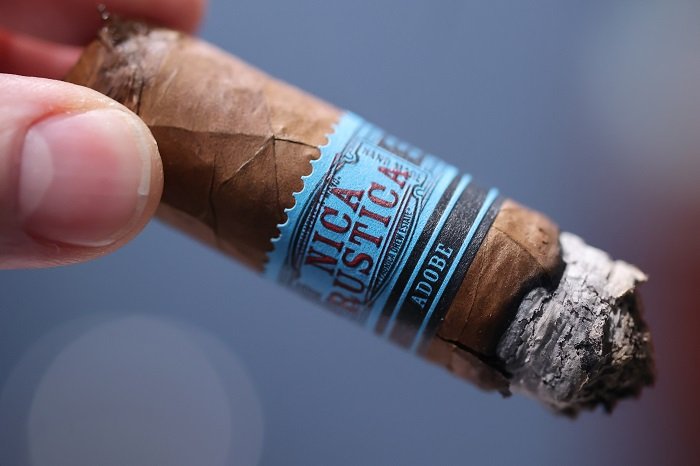 Aaron: The draw was perfect, with just the right amount of resistance that I prefer.
Seth: Draw was off due to the burn.
John: The draw had some snugness to it, roughly 2-1/2 to 3 notches into the resistant spectrum.

Aaron: The cigar began with toasted oak and black pepper. Some earth joined in fairly quickly. The second third saw some mustiness join in. The final third saw a vegetal note join in as the cigar warmed up. The Drew Estate Nica Rustica Adobe Robusto had a nice start with the toasted oak, earth and bold black pepper. The second third dropped a level as the pepper mellowed and the profile lost it’s vibrance and maintained that level the rest of the way. The price point is very attractive and I could see some that really like this profile selecting this as a daily smoke, but for me, it still wasn’t enough to make me want to come back to it all that often.
Seth: I would come back to this Drew Estate Nica Rustica Adobe Robusto because of the profile and price. I like cigars with this type of profile. They are great summer cigars down in the South. I do like some more elegance with the cigar, but you don’t get that with this price. I am a fan of the colors against the wrapper.
John: The Drew Estate Nica Rustica Adobe Robusto had a solid first third with flavors at times reminding me of baked goods like a scone, but it couldn’t maintain that level of complexity through the second and last thirds. While not unpleasant, it just didn’t manage the same level of engagement. The burn required no intervention, with some snugness present on the draw. Would I smoke this again? Normally based on the score I’d say no, but the price point is absurdly approachable so I’d likely smoke these again based on price point alone. Total smoking time was 1 hour and 56 minutes.