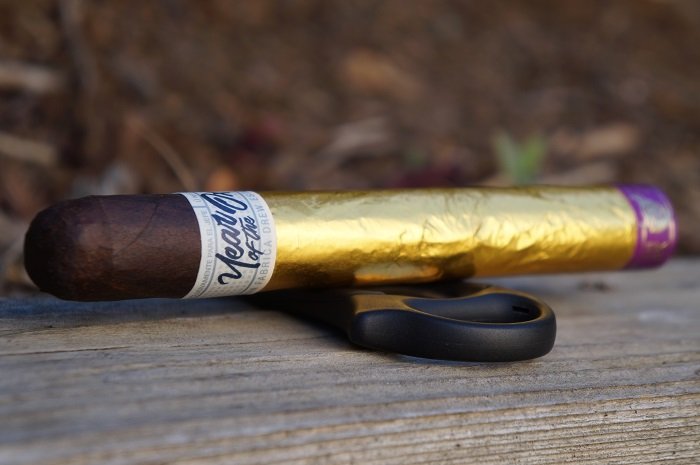 Aaron: The Drew Estate Liga Privada Único Serie Year of the Ox 2021 has the traditional Unico Serie primary band and denotes Year of the Ox. There is a purple foot band that denotes Year of the Ox and 2021 and has an image of an ox head. In between the two bands is a gold foil sleeve. After sliding off the sleeve, a uniform, dark brown wrapper is present with a network of lightly raised veins. The seams are smooth and the caps are well applied. The aroma from the wrapper is a mix of stewed fruit, damp wood and damp earth. The foot brings a fuller stewed fruit note along with some wood. The pre-light draw brings spiced fruit cake and light wood.
Seth: Incredibly dark, the Drew Estate Liga Privada Único Serie Year of the Ox 2021 is oscuro in coloring. The wrapper is rough in texture and there are veins present throughout. Dark chocolate in coloring. It is firm throughout and the aromas on the cigar are that of chocolate, cherries, raisins, oats, tobacco and earth. Lovely. Hard to beat this cigar in presentation.
John: It’s clear that Drew Estate intended to make a packaging splash with their Drew Estate Liga Privada Único Serie Year of the Ox 2021. The immediate feature that stands out is the gold foil covering most of the cigar. Once you move past that, the cigar is double banded, with the secondary band as a foot band. On the gold foil you’ll find a UPC sticker, and the foil slides off neatly from under the primary band. As I nosed the cigar, I was able to pick out aromas of sweetness, earth, wood and hay. From the foot, there was sweet tobacco.
Jiunn: The Drew Estate Liga Privada Único Serie Year of the Ox 2021 has an even maduro wrapper shade. Veins are roughly pressed, seams tight, bunch and roll even and head well wrapped. Aromas from the wrapper give cedar and herbal tea. Aromas from the foot give cedar and prunes. Cold draw gives cedar and figs. 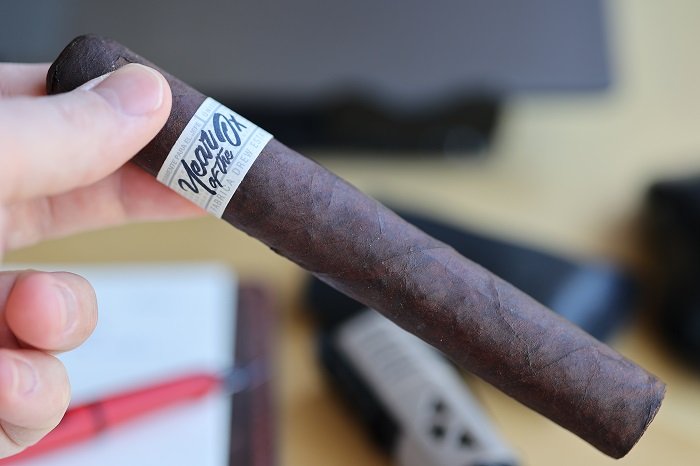 Aaron: The cigar begins with light musty wood and mild black pepper. At three quarters of an inch in, some earth joins the profile. The retrohale brings musty wood and mild black pepper. At an inch and a quarter, the musty wood and earth are even with the black pepper being a bit behind. The strength in this third was right at medium.
Seth: The first third begins by delivering cocoa powder and baking spice notes. I am picking up espresso bean qualities with that, and there is a strong earthy finish. It is smoking around the medium-full level, and it is very balanced.
John: My first few puffs greet my palate with sweet creaminess, and a mild wood finish. Medium baking spices last into the retrohale, with earth to accent. Some dryness starts to take home on the post draw. There’s a mild leather center as the cigar progresses. The baking spices are still holding at medium strength by the halfway point. I would describe the first third as pleasant, but I can’t help but feel the flavor profile is missing something.
Jiunn: There’s a main component of fruit to the first half inch. Lots of sweet raisins and prunes. Past that point, minerals and a mild red pepper spice forms. Retrohaling bumps up the red pepper spice quite a bit, which is a welcoming event. The finish has lingering soil. Strength is medium and body is medium-full. 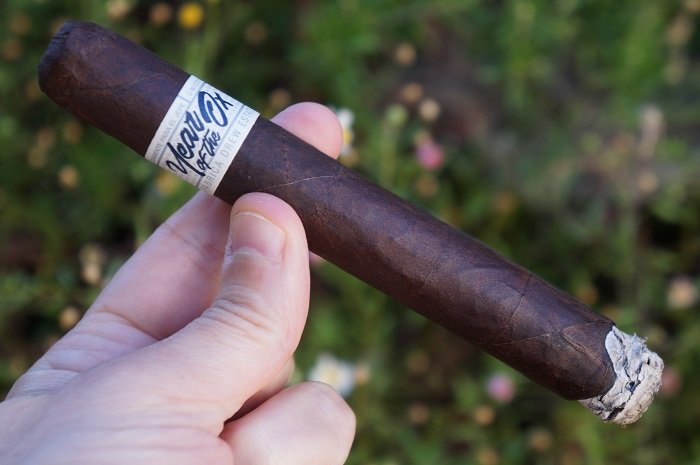 Aaron: As the second third begins, the earth is a bit dry and remains even with the lightly musty wood. Some black pepper remains in the background. At a half inch in, the wood gains a toast note. The retrohale is now toasted wood and dry earth. As the third wraps up, the mustiness is very faint while the toast remains with the wood and the dry earth remains even with it. There is still mild black pepper in the background. The strength in this third remains at medium.
Seth: The second third begins by delivering strong earth and metallic notes. I am not picking up the spice notes from before, but I am getting those espresso bean and cocoa powder flavors. Like before, medium-full in strength and body. It is a really balanced cigar. There is not a plethora of complexity, but the flavors present are pronounced and work off one another wonderfully.
John: Creamy baking spices take the cigar into the second third, with a cleaner finish to each draw than the first third. There’s still a light leather flavor in the center of the profile here. As the second third settles in, I’m experiencing much of the same flavors at the same strength levels from the first third.
Jiunn: The second third shifts the profile to show more minerals. At the same time, there’s no more fruit tones. Instead, it’s more of a generic sweet creaminess. Strength and body remains medium and medium-full, respectively. 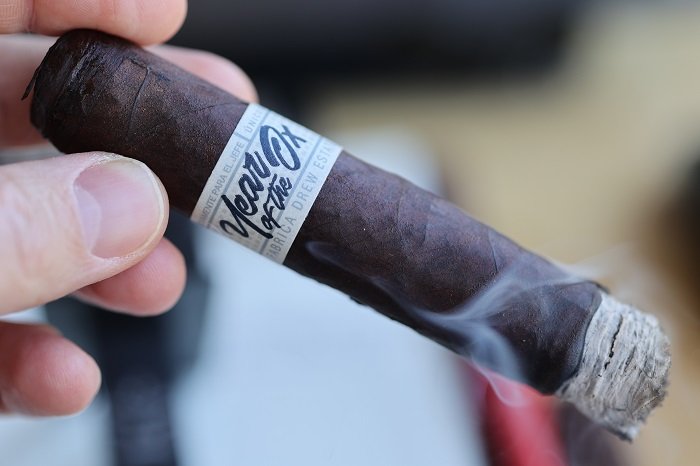 Aaron: As the final third begins, the dry earth takes a slight lead in the profile while the mustiness picks back up. The retrohale is now musty, toasted wood with light, dry earth. At an inch in, the earth becomes dark and toasty. The cigar wraps up with the dark, toasty earth up front with the musty toasted wood a bit behind and some light black pepper in the background. The strength in this third bumped up to slightly below medium.
Seth: The final third is very similar to the second third, and I am getting this espresso bean, earth and cocoa flavor profile. It has this strong mocha note, and that is a win for me. As I have said, not overly complex, but the flavors delivered are very enjoyable and present. Medium-full in strength and body.
John: The baking spices intensify somewhat to medium-full strength as the profile remains consistent from the first two thirds; creamy wood, mild leather in the center of the profile and dry cedar on the post draw. As the last third settles, the draw takes on an earthy finish.
Jiunn: No changes to the final third. Still getting the same generic sweet creaminess, minerals, cedar and red pepper. Strength and body finishes the same medium and medium-full. 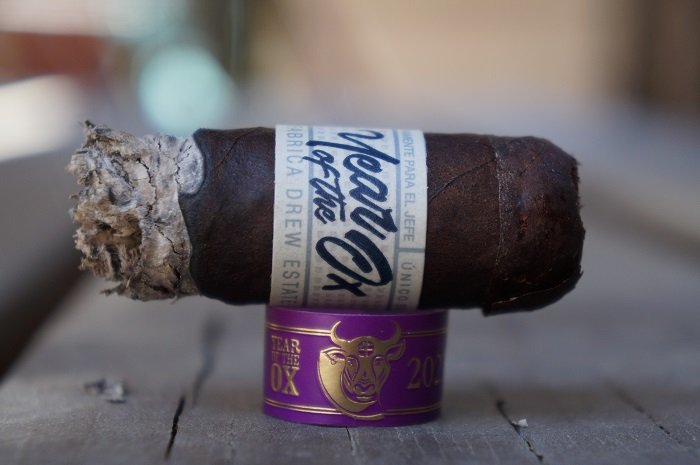 Aaron: The burn was a bit wavy throughout, but the big issue was the cigar going out and requiring re-lights, which it did three times.
Seth: Burn was good. It was a little wavy in parts, but the wrapper was super thick.
John: Two cigars were smoked for the review. Both cigars had a straight ash that held on up to two inches at a time. The first cigar went out in the last third requiring a re-light, the second cigar required no attention through the review.
Jiunn: Perfect burn performance. Even burn, solid ash marks, that wild chimney DE smoke production and cool burning temperature. 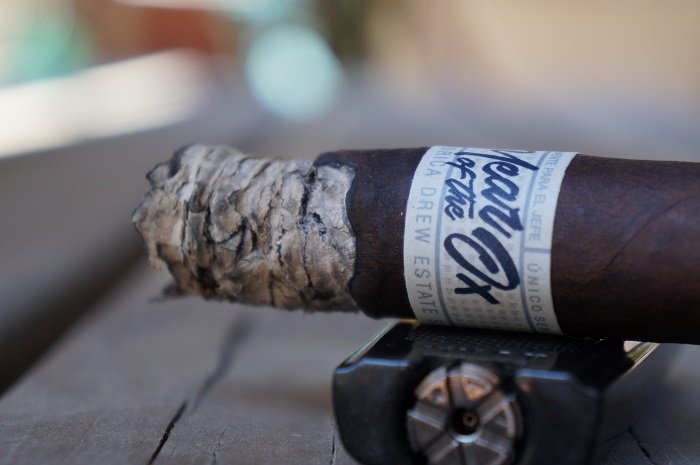 Aaron: The draw was slightly tighter than I prefer, but didn’t cause any issues with the smoking experience.
Seth: Great draw throughout.
John: The first cigar had at most one notch of resistance putting it in the ideal zone for the draw. The second cigar was 2 to 2-1/2 notches into the resistant spectrum, putting it in the good category for draw.
Jiunn: The draw also perfect, providing the best air flow.

Aaron: Overall, the cigar tasted like an aged out Liga. It didn’t have the potency that other Liga’s have in their initial year. The profile was focused around musty, toasted wood and dry earth along with some black pepper. While many won’t have a chance to smoke the Drew Estate Liga Privada Único Serie Year of the Ox 2021 as it’s a release for China, I don’t think they’re missing anything and I would say it’s not worth chasing down. It was nice to get an opportunity to smoke this, but that’s about the extent of my interest.
Seth: If the Drew Estate Liga Privada Único Serie Year of the Ox 2021 was a movie, it would be Chocolat. Chocolat with a well done sex scene. In all seriousness, I really enjoyed this cigar. It was balanced and it had depth. There was not an abundance of complexity, but it continuously delivered enjoyable flavors. It never went flat. A rich cigar that was not too much, I could smoke these back to back if possible. Nice construction, great draw, lovely flavors. It’s a win!
John: The Drew Estate Liga Privada Único Serie Year of the Ox 2021 overall was a good cigar, delivering a balanced and enjoyable combination of baking spices, wood and creaminess through the first two thirds. Someone who regularly smokes Drew Estate Liga Privadas would be right at home smoking this cigar, but as an exclusive for China I wonder if the flavors may be too intense. Across the two cigars smoked, the construction was very good, with a perfect draw and a re-light on the first sample, and a slightly resistant draw with no burn issues on the second. I enjoyed smoking this cigar and I would happily light another one up if I had one available. Total smoking time averaged 2 hours and 24 minutes.
Jiunn: Relatively speaking for a Connecticut broadleaf, the Drew Estate Liga Privada Único Serie Year of the Ox 2021 was on the lighter side. It didn’t quite have the highly earthy, viscous and chocolate overlays. Instead, it smoked lighter, especially in terms of earthiness and strength. To me, there’s nothing wrong with that and it’s a good showing, especially for the Chinese market. A cigar well made to celebrate the Year of the Ox.