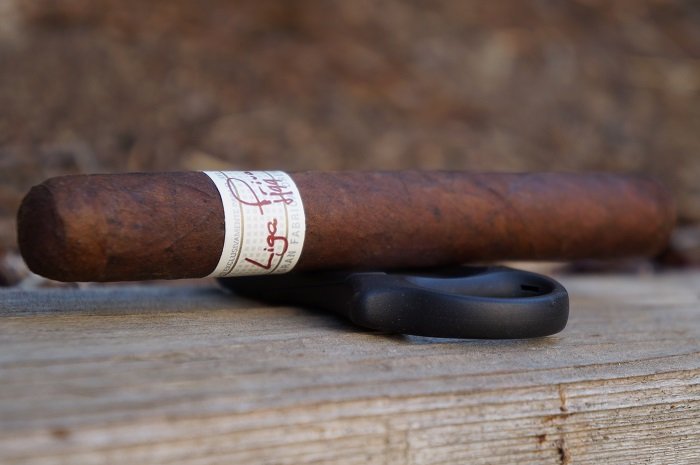 Aaron: The wrapper on the Drew Estate Liga Privada H99 Toro is marbled between medium and dark brown and also has a reddish tint to it. The seams are raised a fair amount and the head has a top cap that is lifting most of the way around. The band is the traditional style for the brand but uses a brick red text and logo color for this line and denotes the H99 variation. The aroma from the wrapper is light, but brings a combination of wood and earth. The foot aroma is a very musty cedar. The pre-light draw brings the same pungent, musty cedar that I got from the foot aroma.
Seth: The Drew Estate Liga Privada H99 Toro has lovely marbled coloring on the wrapper. Colorado Maduro throughout. The veins are small and there is some tooth present throughout. The cigar has aromas on the foot of spices, stone fruit and rich earth, while the wrapper is giving off dry earth and leather qualities.
John: The Drew Estate Liga Privada H99 Toro did not come in cellophane, and did not have a UPC code or sticker. Aromas from the cigar included primarily a sweet cedar. From the foot, there was sweet tobacco and hay.
Jiunn: The Drew Estate Liga Privada H99 Toro has inconsistencies within the wrapper color. No green tobacco, but the brown shading is highly variable. Veins are well pressed, seams tight, bunch and roll even and head well wrapped. Aromas from the wrapper tell red pepper, star jasmine flowers and dry barnyard. Aromas from the foot give rich cedar and roasted nuts. Cold draw gives cedar, roasted nuts and baking spices. 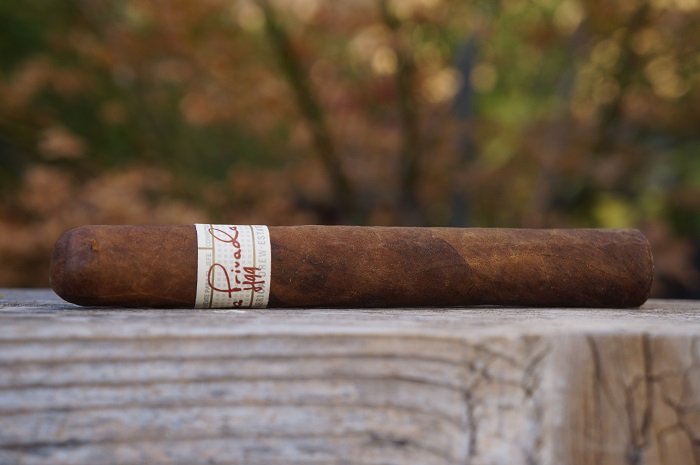 Aaron: The cigar begins with musty wood and mild baking spice. At a quarter inch in, a light chalkiness joins the profile while the baking spice is very subtle. The retrohale is musty and lightly toasted wood. At an inch and a quarter, a light earth joins the profile. At an inch and a half, the baking spice picks up a bit and the wood becomes more defined as cedar and gains a light toast. As the third comes to a close, the profile is musty and lightly toasted cedar up front with some dry earth and baking spice not too far behind. The strength in this third was right at medium.
Seth: The first third starts out with this strawberry jam flavor, and it is paired with buttery toast. There are some green aspects with that, and I am picking up some leather, wood and dry barnyard notes on the finish. In terms of strength and body, I would classify the cigar as a solid medium.
John: The first third opened with sharp spices, sweetness and a medium strength wood center. Baking spices, sweetness and wood were all intensified through the retrohale. Some subtle orange citrus is present under the intense spices through the retrohale. Some earth and cedar settles on the post draw as it progresses. Shortly after, a general sweetness also lingers on the palate between draws.
Jiunn: The first third is more of an ease of flavors as compared to rough and forceful. Plenty of yeasty bread, roasted nuts and red berries. The pepper delivery is smooth. Retrohaling brings massive doses of white pepper but also shows some nice caramel sweetness. The finish has a red pepper spice gently sitting on my rear palate. Strength is medium-full, body is medium. 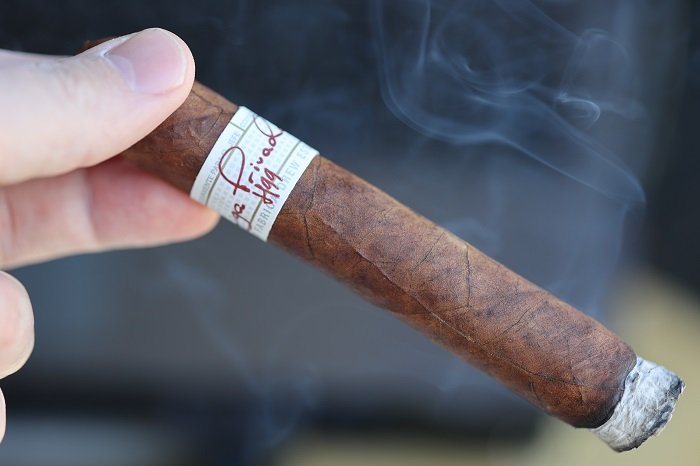 Aaron: As the second third begins, the dry earth is now even with the musty, toasted cedar up front and the overall profile is a bit dry. At a half inch in, the toast level increases a bit and the baking spice has transitioned to a dull black pepper. The retrohale is musty, toasted cedar. As the third comes to a close, the musty, toasted cedar and dry earth are even with the dull black pepper a bit behind. The strength in this third bumped up to slightly above medium.
Seth: The fruit flavors continue into the second third and they are complimented by this light sweet spice. I am still picking up light barnyard qualities, bit of earth, wood and grass, and there are some leather qualities present as well. Like before, medium in strength and body. It has this sour fruit twang on the finish that is quite enjoyable.
John: The second third is wood forward with a combination of trailing sweetness and wood into the post draw. The profile continues as wood forward as it progresses. By the halfway point, there is mild citrus providing some accent flavor.
Jiunn: The second third decreases the complexities a bit, such that I’m still getting beautiful notes of yeasty bread and roasted nuts but the red berries are completely gone. Still an overall enjoyable third. Strength and body finishes medium-full and medium, respectively. 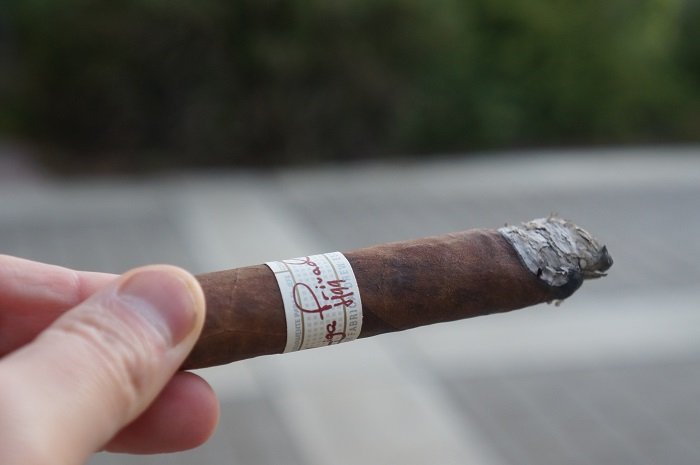 Aaron: The final third begins with a slight creaminess joining, but the overall profile is still a bit dry. The retrohale remains musty, toasted cedar. At an inch in, the toast level picks up a little more. The cigar wraps up with musty, heavily toasted cedar and dry earth up front, with dull black pepper in the middle and light creaminess in the background. The strength in this third finished at medium-full.
Seth: The final third is like that of the second third and that I am getting this sour fruit and strawberry profile with some sweet spice. The earth, leather and wood are present as well, and it is smoking around the medium level for strength and body.
John: The last third is sweet wood, with a wood and musty finish into the post draw. As the last third progresses, a mildly bitter earth takes hold in the middle of the profile.
Jiunn: The final third shows a continuous dip in flavor complexities. I’m now mainly left with some softness in roasted nuts and subtle bread. Not unenjoyable by any means but it’s a bit bland. Strength and body is still medium-full and medium. 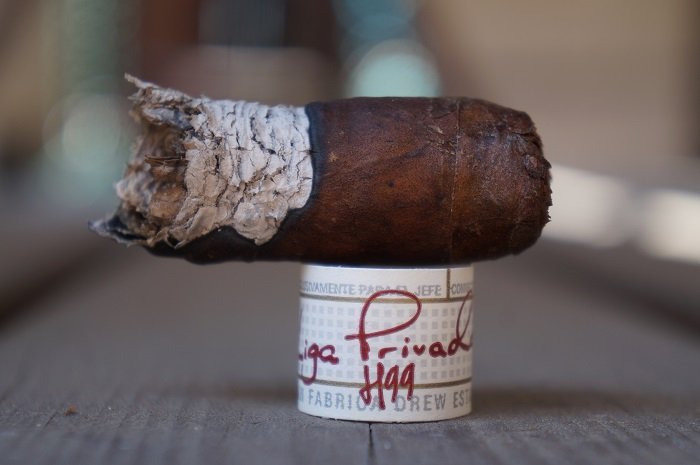 Aaron: The burn was a bit wavy throughout and the cigar went out twice in the middle third, requiring re-lights. The ash held on in inch and a half increments.
Seth: Great burn throughout.
John: Three cigars were smoked for review. The first and third cigar had no burn issues and required no intervention. The second cigar was a disastrous tale, requiring two re-lights in the first third, two re-lights in the second third and a re-light in the last third. If that cigar had been reviewed by itself, the burn rating would have been our lowest rating at ‘Bad’.
Jiunn: Burn performance had it’s fair share of issues. Multiple touch-ups due to improper wrapper burn. There was also an uneven burn such that all three cigars smoked for review had a cherry burn. 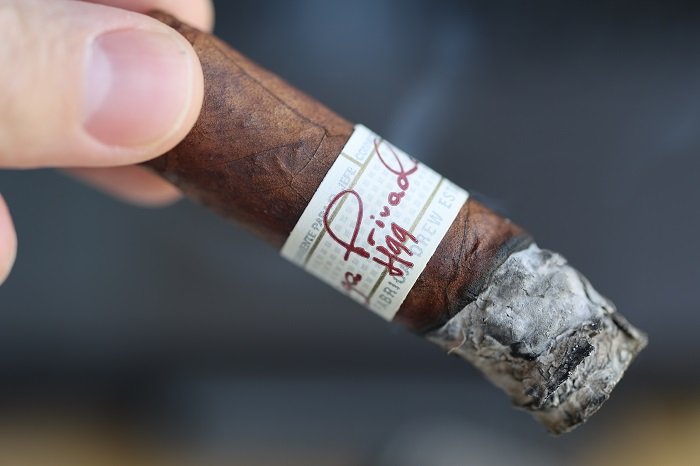 Aaron: The draw was slightly tighter than I prefer, but didn’t cause any issues with the smoking experience.
Seth: Perfect draw from start to finish.
John: Three cigars were smoked for review. All three cigars had a draw that was right in the ideal zone between open and resistant.
Jiunn: The draw on the other hand was great, giving the ideal air flow.

Aaron: The profile was focused around musty, toasted wood which later became more defined as cedar, some dry earth and baking spice that transitioned to black pepper. The burn was a bit of an issue through the middle of the cigar, but wasn’t too bad. Overall, the Drew Estate Liga Privada H99 Toro was average throughout as it was a bit dry and maintained a fairly linear flavor profile. After finally getting my hands on this cigar after a long wait, it was a bit of a disappointment. If you’re a fan of the brand, you’ll still want to track these down to try them, but for me, I don’t see the cigar providing enough value at the price point to want to go back to it all that often.
Seth: I enjoyed the Drew Estate Liga Privada H99 Toro because of the flavors delivered, but I don’t think that this is a cigar for a lot of smokers. I have smoked a number of them, and for the most part they are fairly consistent, but I believe the flavor profile delivered is a departure from what you typically get with the Connecticut Habano/Corojo releases from Drew Estate and Foundation. This is more fruity and lighter. When you think of wines that are very berry heavy or jammy, Malbec comes to mind, but this is more of a very strawberry Rosé. I know that sounds crazy, but that is the best way for me to describe the smoking experience. Funky smoke.
John: After smoking three Drew Estate Liga Privada H99 Toro I’m still not sure what to make of the offering. Overall, the first third was interesting but the second and last thirds on all three cigars, while pleasant, didn’t offer up what I would characterize as an engaging ‘Liga Privada’ experience. I would be hard pressed to choose the H99 over the T52 or the No. 9. All three cigars had a perfect draw, with 2 out of 3 cigars having a perfect burn, and one having the lowest rating of burn we hand out. Cigars are a handmade product, and although rare to encounter a burn problem from Drew Estate, it can happen. Total smoking time averaged 2 hours and 33 minutes.
Jiunn: Given the three cigars I smoked for review, I can say a couple things. The Drew Estate Liga Privada H99 Toro is highly inconsistent. The first two tasted harsh and rough around the edges. The last one was overall good, and the experience is as noted within this review. So I guess with that said, I think it really needs time to sit and age a bit. What all had in common was burn performance issues having a cherry burn and wrapper burn issues. I look forward to more of these down the road to further gauge.