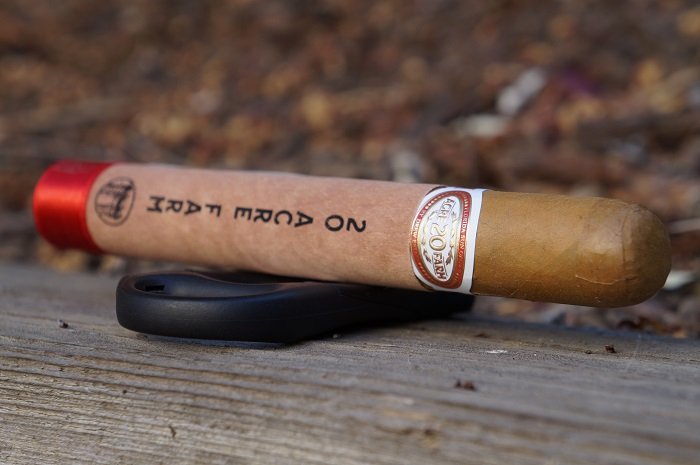 Aaron: The primary band on the Drew Estate 20 Acre Farm Toro is white, red and gold and denotes the line name and company. A cedar sleeve runs from just under the primary band down to the foot and has the line name printed on it vertically. At the foot, a red ribbon is over the cedar. After sliding the cedar sleeve off, a medium tan, with hints of green, wrapper. There are some decently raised and knotty veins present. The seams are pretty smooth, and the head has a top cap with some slightly lifting edges. The aroma from the wrapper is a mix of cedar and sweet hay, while the foot brings a mix of cedar and graham cracker. The pre-light draw brings dry, aged cedar and a very mild baking spice.
Seth: Even with the cedar sleeve removed, the Drew Estate 20 Acre Farm Toro itself is beautiful. The cigar has a lovely golden hay color, and it is a great Claro colored cigar. It is firm in hand and has a simple but lovely applied cap. The cigar has small to medium sized veins present throughout, and it is silky in texture. I am picking up aromas of white pepper, tobacco, hay, oak and cedar on the wrapper and foot.
John: The Drew Estate 20 Acre Farm Toro pulls out quite a number of stops, appropriate for a cigar positioned in the premium bracket. The cigar comes in cellophane, it has a UPC sticker with an integrated tear tab to remain intact, the cigar has a primary band along with a red ribbon foot band. Additionally, there is a cedar sleeve that covers two-thirds of the cigar, indicating 20 Acre Farm on it. For aromas, I’m getting damp moss, a vegetal note and faint wood. From the foot, just mild tobacco and wood.
Jiunn: The Drew Estate 20 Acre Farm Toro has a golden brown Colorado Claro wrapper shade. Veins are neatly pressed, seams tight, bunch and roll overall with a couple minor dimples and head well wrapped. Aromas from the wrapper tell abundant barnyard and hay. Aromas from the foot tell barnyard, white pepper and cedar. Cold draws reveal primarily hay and a tingling red pepper spice on the tip of the tongue. 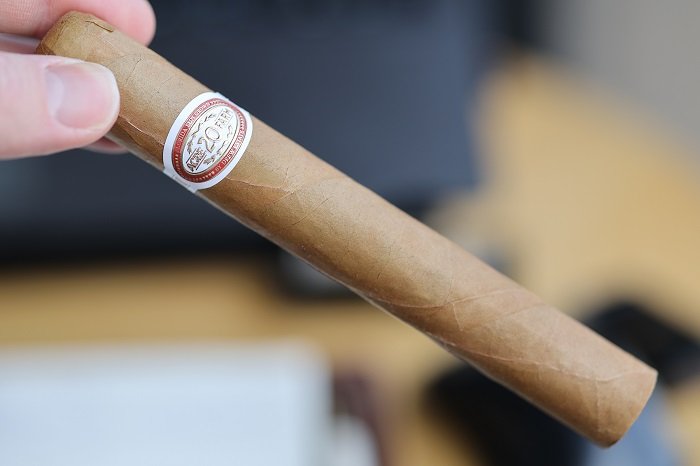 Aaron: The cigar begins with toasted cedar and baking spice. At a half inch in, a light mustiness joins the profile. The retrohale starts with a bold baking spice which stings the nostrils and then toasted cedar and mustiness comes through. At an inch and a quarter, the baking spice transitions to black pepper and the overall profile is a bit dry. The third wraps up with musty, toasted cedar with black pepper right behind. The strength was right at medium.
Seth: The first third starts out with lovely cream flavors that are paired with a white pepper spice. There are some hay and cedar qualities present as well, and it has a smooth and soft finish. I would classify the cigar as medium in strength and body.
John: The first third gets going with baking spices at medium strength, dry wood and mild hay through the post draw. Some creamy chocolate develops after just a couple puffs on the retrohale. A lingering pepper is present on the post draw as it settles, at medium to medium-plus intensity. Some light citrus moves into the center of the profile, but run over by a moss and earth combination (all three of which I find to be fingerprint flavors of FSG tobacco), on the post draw. Dry cedar joins the post draw, moving up to medium as it progresses. Approaching the halfway point, the post draw pepper is at medium-minus strength, as chocolate and creamy baking spices drive the retrohale. One thing to remark on is that the dryness on my palate through the post draw is fairly distracting.
Jiunn: The first third is elegant with a spicy kick. The traditional Connecticut shade notes are no doubt there; hay, cedar and toast. But there is also a kicked up dry red pepper spice, that becomes more evident on the retrohale. The finish is pretty long, with a mixture of cedar and tapered dry red pepper spice sitting on the tongue. Strength and body is medium. 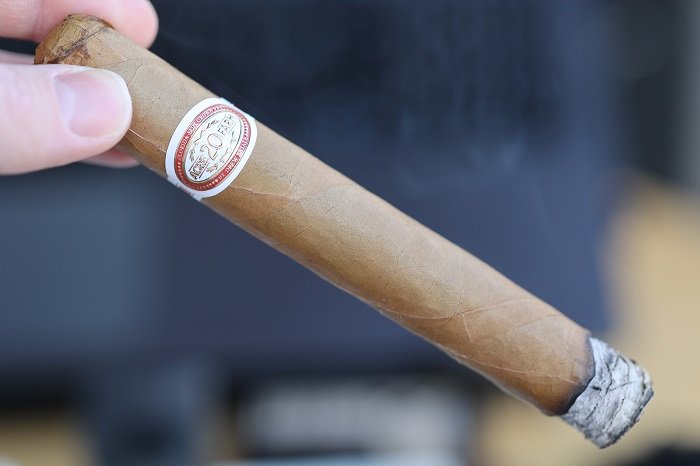 Aaron: As the second third begins, the black pepper has mellowed and the retrohale has also seen the black pepper move to the background. At a half inch in, some light, dry earth has joined in. At an inch in, a faint honey sweetness appears. As the third comes to a close, the profile is musty, toasted cedar up front with dry earth a bit behind and light amounts of black pepper and honey sweetness in the background. The strength bumped up to slightly above medium.
Seth: The second third delivers a flavor of popcorn kernels, cedar, hay, white pepper and tobacco. There are some creamy qualities, butter as well, but it is mostly creamy and hay in flavors. Medium in strength and body.
John: A dry moss and cedar combination starts here with a creamy baking spice pair into the retrohale. The post draw is still driven by dry cedar. After a few puffs, chocolate returns to the retrohale. By the halfway point, baking spices and creaminess are both present through the retrohale in equal strength.
Jiunn: The second third’s profile becomes breadier, but still has the same projection of hay, cedar and good dry red pepper spice backing. The finish is less about pepper, and more about cedar. Strength and body is still medium. 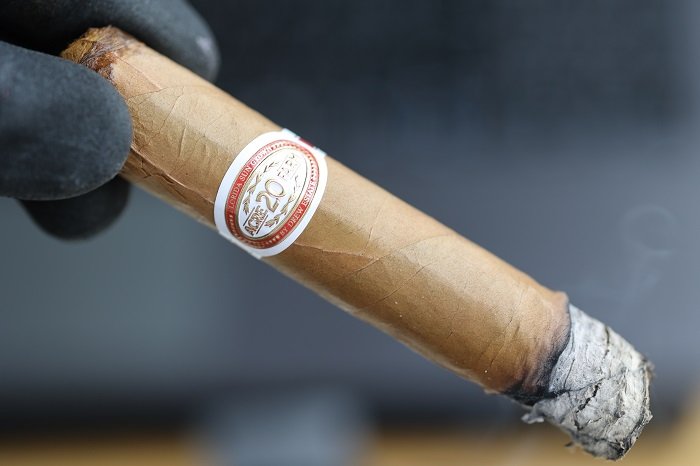 Aaron: As the final third begins, the toast level has increased a bit and the honey sweetness has departed. The retrohale is now musty, toasted cedar and dry earth. At a half inch in, the musty, toasted cedar and dry earth are now even. As the cigar wraps up, the profile is an even mix of musty, toasted cedar and dry earth up front with mild black pepper in the background. The strength remained at slightly above medium.
Seth: The final third was in line with the second third. I was picking up some hay, cream and cedar notes, and they were paired with some sharp white pepper qualities. Popcorn kernels noticed on the finish. Like before, medium in strength and body.
John: Dry wood combines with medium-minus strength baking spices, as a mossy funk and dry wood carry into the post draw. Some earth moves into the middle of the profile at the end of the draw. Some citrus returns to the center as it progresses, fighting against the strength of the moss and earth.
Jiunn: A burnt and stale cedar note forms in the final third, which deteriorates the overall enjoyment. Aside from that, I’m still getting bread, hay and dry red pepper spice. Strength and body finish the same medium. 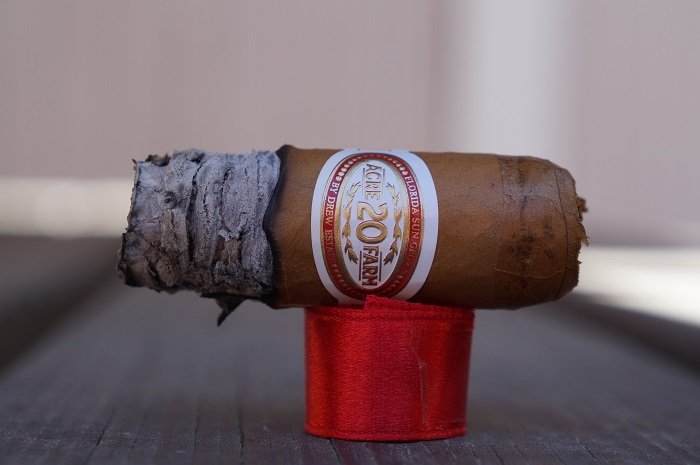 Aaron: The burn line was straight the entire way and the ash held on in inch and three quarter increments.
Seth: Amazing burn throughout.
John: Two cigars were smoked for review and both of them had the same issue of requiring a re-light. The first cigar went out at the halfway point. The second cigar stalled at the halfway point and I was anticipating it, but it went out just inside the last third.
Jiunn: Burn performance was overall good. The only negatives being a quick touch-up and a complete re-light within the second third. 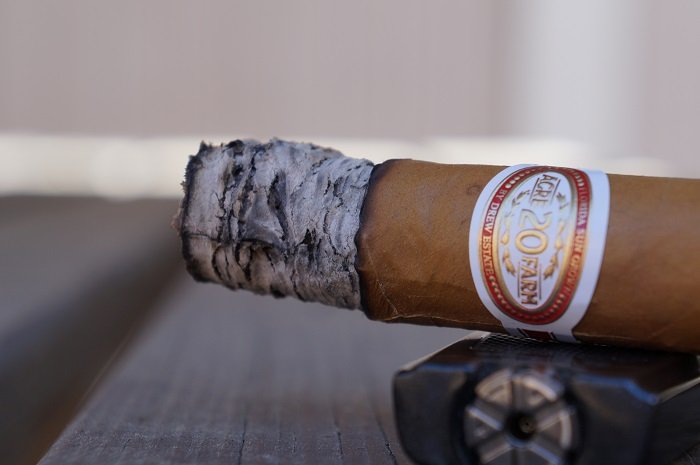 Aaron: The draw was perfect, with just the right amount of resistance that I prefer.
Seth: Perfect draw.
John: The first cigar reviewed had a resistant draw, roughly 3-1/2 to 4 notches into the resistant spectrum. The second cigar reviewed had a perfect draw, right in the middle of the open and resistant spectrum.
Jiunn: The draw was slightly tight, but most importantly, it did not interfere with the flavor experience.

Aaron: The cigar began with toasted cedar and baking spice. Some mustiness joined fairly quickly. Later, the baking spice transitioned to black pepper. The second third saw some dry earth join along with a light honey sweetness. The final third saw the sweetness depart. Construction was perfect. The Drew Estate 20 Acre Farm Toro was fairly average throughout as it had a basic flavor profile. The big drawback to me was the dryness that was present very early on and remained throughout the cigar. For me to want to come back to this, the dryness would need to be blended out somehow, otherwise it’s just not enjoyable enough to want to come back to.
Seth: The Drew Estate 20 Acre Farm Toro is a great cigar for a new smoker. It is a very approachable Connecticut offering, and it is not overly complex. There is not a lot going on with the cigar, but at the same time what is present is good. Nothing unpleasant about the cigar, just lacking. I would look at it as a cigar that you could use to take a cigar smoker from ACID to more traditional offerings. It is not as welcoming as an ACID Kuba Kuba, even though you might think it is with the wrapper, and I think it has more body and strength than a Kuba Kuba. Smoke this, then smoke a Rocky Patel White Label. Smoke that, then smoke a Davidoff Grand Cru. You will see the levels of improvement.
John: The Drew Estate 20 Acre Farm Toro was a consistently enjoyable cigar through both reviews. The majority of the flavor balance and complexity came in the first and second thirds, with the last third as pleasant. Both cigars required a re-light, and one cigar had a resistant draw, with the other having a perfect draw. Like most cigars containing FSG, this is likely to be a love it or hate it scenario. As I am already on the record of enjoying FSG tobacco, I am well into the love it category. Total smoking time averaged 1 hour and 59 minutes.
Jiunn: Elegant and at the same time punchy. The Drew Estate 20 Acre Farm Toro has all the traditional (good) sides of Connecticut Shade as you would want (bread, hay, cedar). But unlike most, this one has a nice consistent dry red pepper spice backing that interplays quite well with the softer notes. I’d call this a winner.