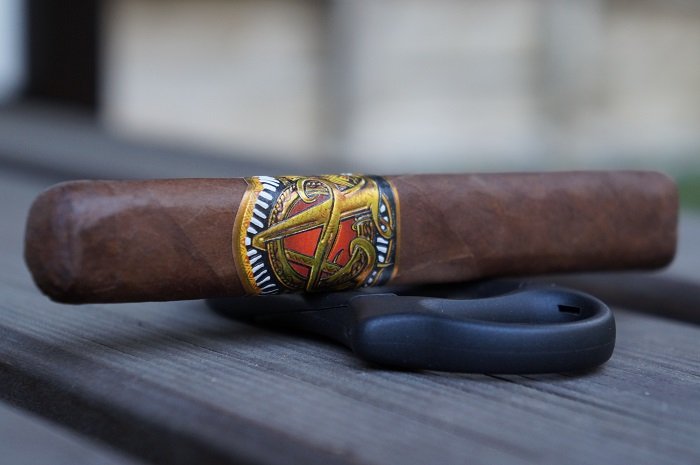 The wrapper on the Don Lino Africa Duma is a slightly marbled medium brown. There are a couple of slightly raised veins and the seams are fairly easily visible as they are also slightly raised. The head is well finished with what appears to be a double cap. The band has a large gold A intertwined in a gold ring in front of a tribal design and the name of the cigar on the back. The aroma from the wrapper and foot are the same and brings an aromatic Spanish cedar. The pre-light draw is just a faint cedar. 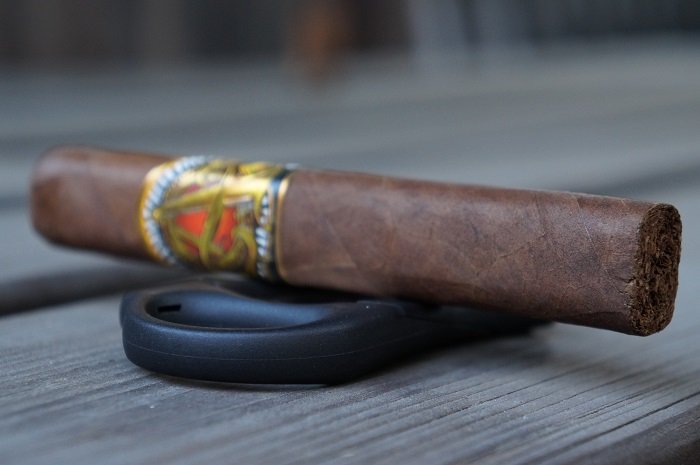 The Don Lino Africa Duma is a lovely pressed cigar and while the wrapper is simple in so many ways, that’s what makes it great. It has this solid chocolate coloring to it, a classic dark Natural coloring. There are few veins present and it is silky in texture. The aroma on the cigar is of chocolate, raisins, minerals, earth and fruit stew. 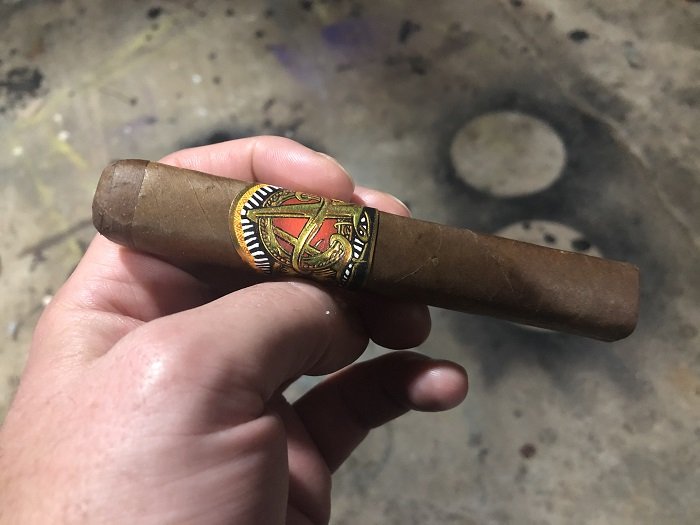 The Don Lino Africa Duma has a soft box press format. The band is an ornate gold A with a print background along with zebra stripe accents. Nosing the cigar, I picked up aromas of barnyard, fresh earth and woody spice. In the foot, mild sweet tobacco. 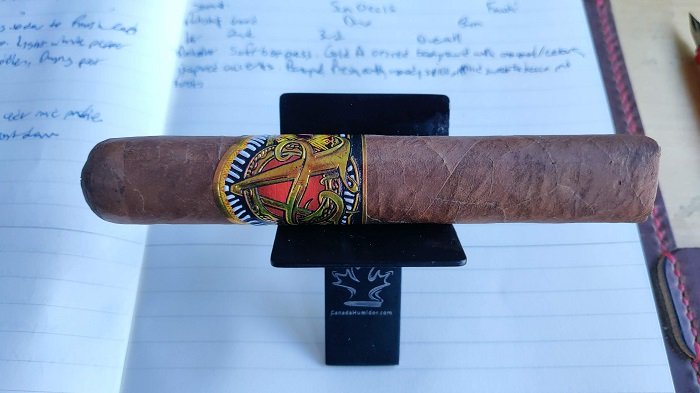 The cigar begins full force with cedar, cinnamon, mustiness and light cream. At a quarter inch in, the light cream goes away. At a half inch in, the cinnamon has mellowed, creating a smoother overall profile. At an inch in, a slight cream returns as the cinnamon is now a faint baking spice. The cedar is in the lead while the mustiness is right behind. The retrohale is slightly spicy cedar with mustiness right behind. As the third comes to a close, the profile is now just a musty and slightly spicy cedar. The strength in this third began medium-full and finished at slightly below medium. 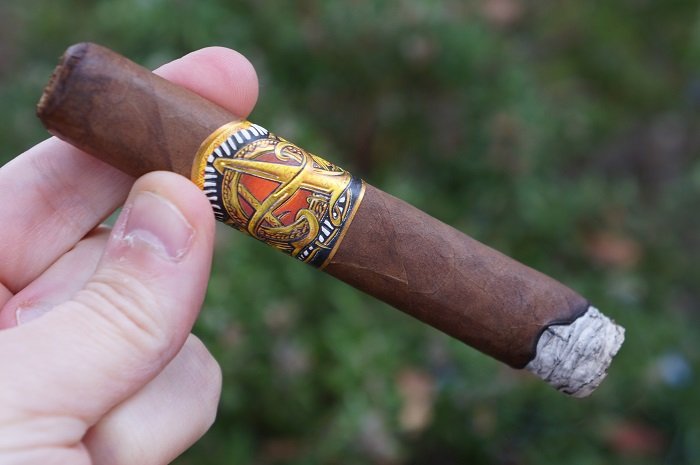 The first third opens up with sweet spice and nutty qualities, almonds and walnuts, and I am getting some earth, stone fruit and cacao. It has these classic and enjoyable flavors. I would classify the cigar as being medium-full in body, medium in strength and medium-full in flavors. A really nice start to the cigar. 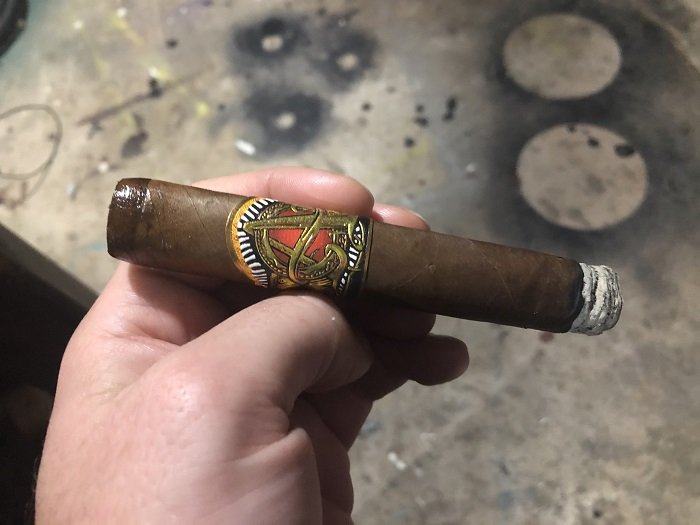 Light cedar and hay opens the cigar up, finishing with white pepper. Baking spices and pepper on the retrohale. That pepper quickly moves to medium, lingering on my lips and tongue. Minutes later, mild chlorophyll and earth join the flavor mix. There’s an interesting aroma from the cigar that I’m not able to describe adequately. Light earth joins the middle of the profile, with mild cocoa buried underneath. At an inch or so into the first third, the post draw pepper has taken over most of the palate. At the halfway point, some mild sweetness comes through at the end of the draw. At the middle of the profile, cocoa at light plus. Some mild hay comes through at the beginning of the draw but is quickly erased by the other flavors. Nearing the end of the first third, mild cocoa comes through on the retrohale, with post draw dry earth. 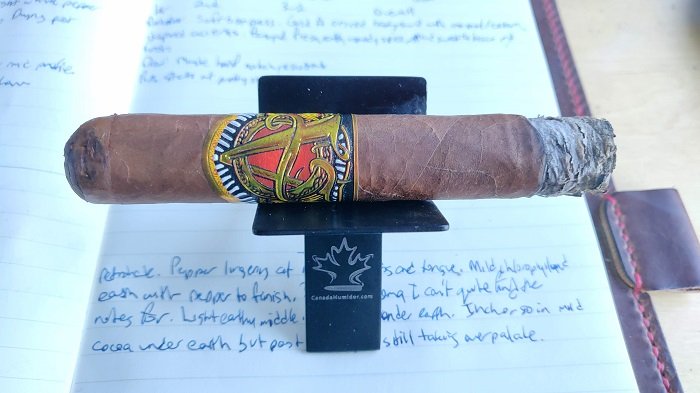 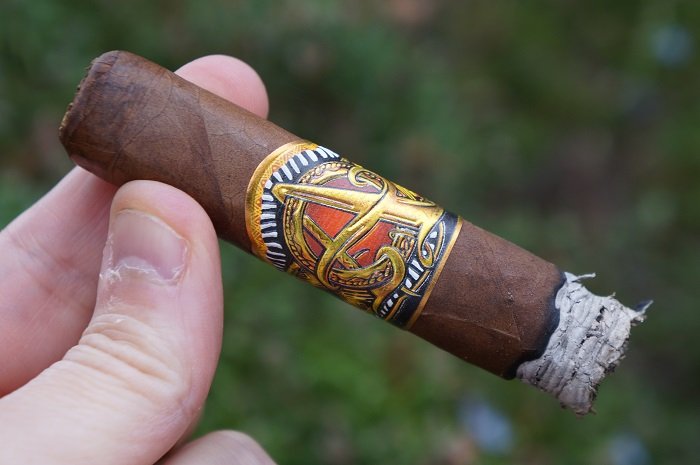 When I get into the second third of the cigar, I find some tobacco notes on the rise, bits of stone fruit, earth, peppery spices and espresso beans. The cacao flavors have faded, but the espresso bean notes are lovely. Again, medium-full in body and flavors and medium in strength. 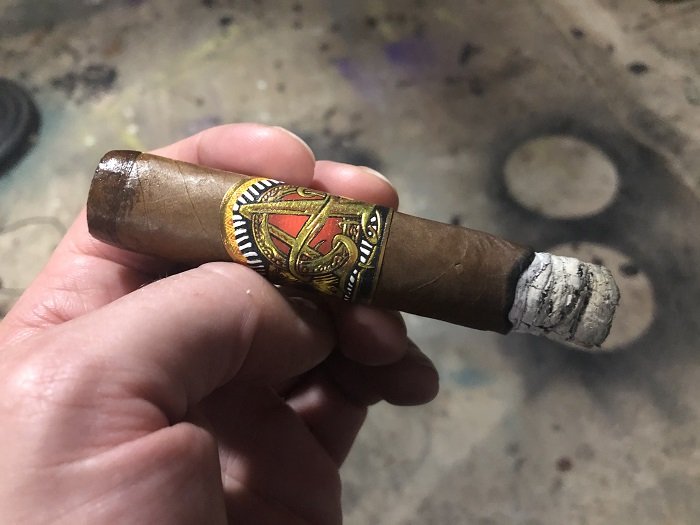 Each draw brings mild cocoa finishing with dry cedar. The post draw has lingering earth with a mild toasted quality to it. That post draw earth rapidly takes over the profile as the second third establishes itself. Some time later, mild cocoa manages to break through the toasted earth. 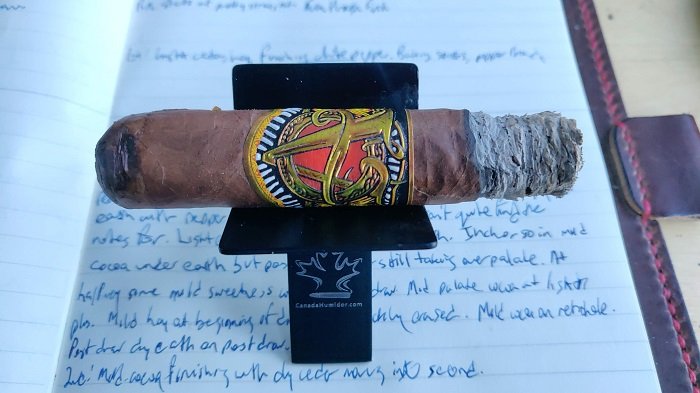 The final third sees the faint creamy coffee rejoin the musty and spicy cedar with dry earth. At a half inch in, the cedar gains a bit of char. The dry earth makes it’s way into the retrohale to join the musty cedar as the spiciness has gone away. The cigar wraps up with musty cedar and dry earth. The strength in this third bumped up to slightly above medium. 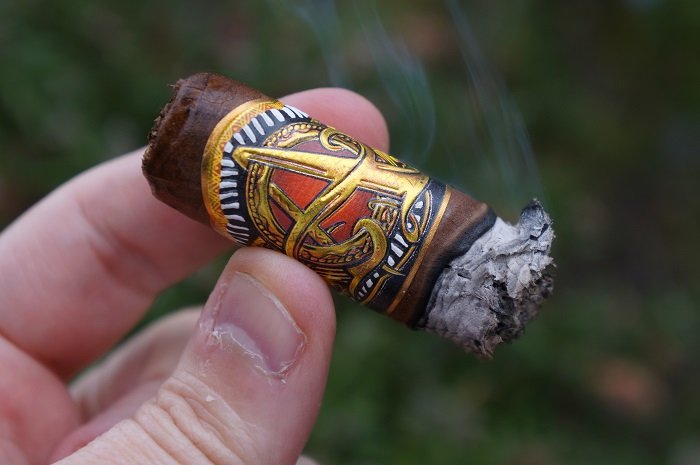 The final third shows some growth in the flavors but at the same time a slight harshness towards the end. I am getting those cacao, espresso bean, tobacco and earth notes, but the finish is of minerals and charcoal. I would classify the cigar as being medium-full in all areas, and if it wasn’t for the mineral and charcoal flavors, it would be a really nice finish. 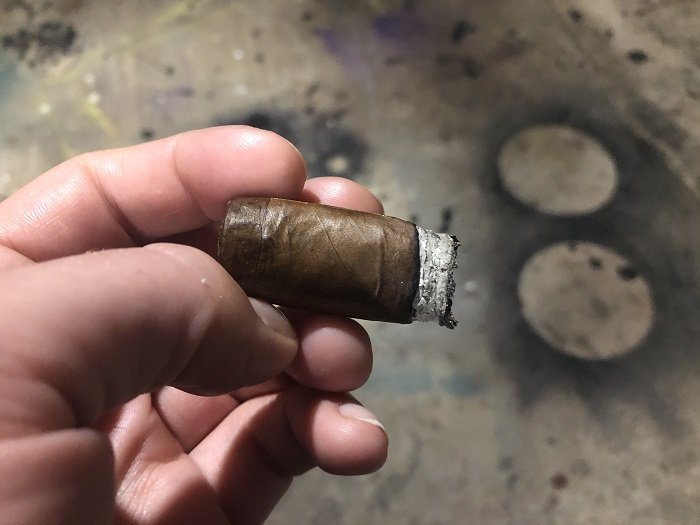 Toasted earth leads the flavor profile moving into the last third. Mild cocoa comes through only on the retrohale. As the cigar establishes itself, hay takes up the middle of the profile. 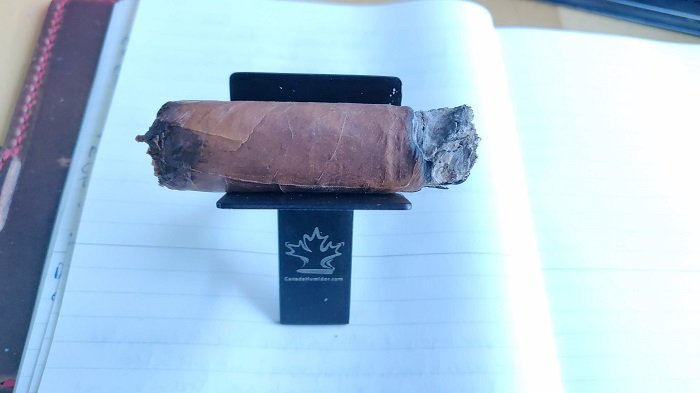 The burn line was a little wavy throughout but never needed any attention. The ash held on in inch and a half increments. 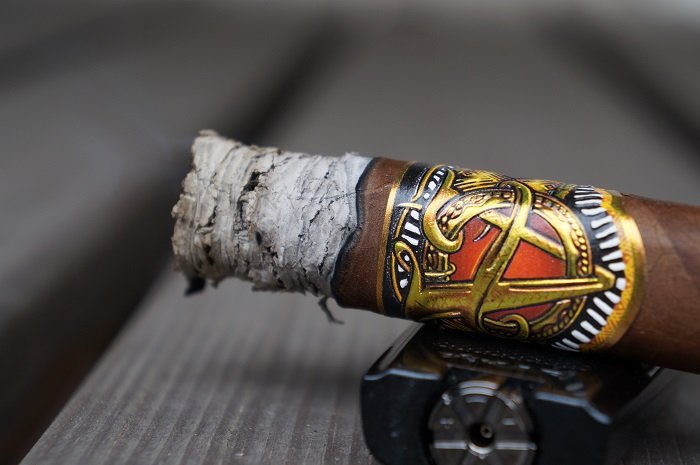 The burn was great from start to finish. 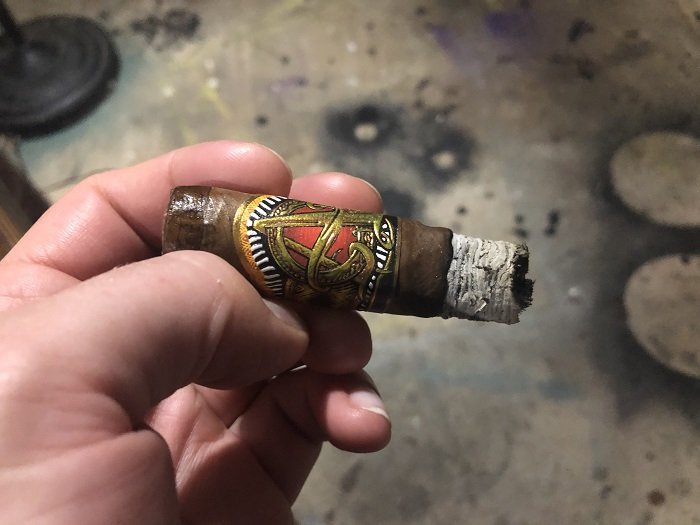 The burn started out pretty straight, and was even through the first third. In the second third, the cigar went out in the bottom half, requiring a re-light. No issues through the last third. 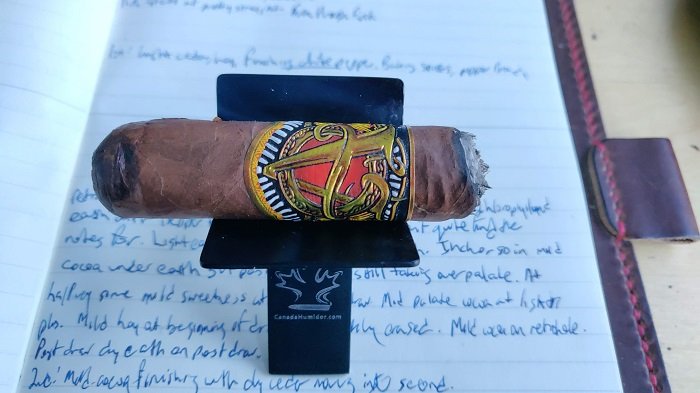 The cigar began with cedar, cinnamon, mustiness and light cream and settled in with musty and slightly spicy cedar and baking spice. As it progressed, the baking spice left and some dry earth joined with a short burst of creamy coffee. Construction was very good and strength started at medium-full but was right around medium the rest of the way. In comparing the Don Lino Africa Duma to some great African runners, this cigar was more of a sprinter (Olusoji Fasuba) than a long distance runner (Eliud Kipchoge) as the flavorful part was just the first inch or so and then the rest of the cigar was pretty average. I never smoked the original Africa so I can’t say how it compares, but it’s probably not something I’m likely to return to anytime soon. The cigar had a slow smoking time, so that adds some value, but you’ll need to try it for yourself to see what you think.

It is great to see the Don Lino Africa Duma back, and it is a solid cigar, but I would have loved to see more Cameroon in the blend. I would love to get a little bit more Africa in a cigar that revolves around the continent. With that being said, solid and enjoyable flavors in the first and second third with a slight bit of harshness in the end. Burn and draw were stunning and this was a well made cigar. I do want to revisit the cigar, try it out in other vitolas, but I think it will do well for the company overall. I know it is a lot asking for a Cameroon wrapper, but it would have been great to get more of that tobacco in the filler blend at the least.

The cigar has at most a half notch of resistance, putting it in the ideal zone for draw.

The Don Lino Africa Duma has an interesting appearance and interesting aromas, but I never found that the flavor profile came together in a way that appealed to me. On paper, all the flavor components seem to be there with a mix of cedar, pepper, baking spices, chlorophyll, cocoa, hay and earth, but they didn’t find a balance through the smoking experience. Overall, I found the cigar flavor profile to be average. Total smoking time was 1 hour and 30 minutes.