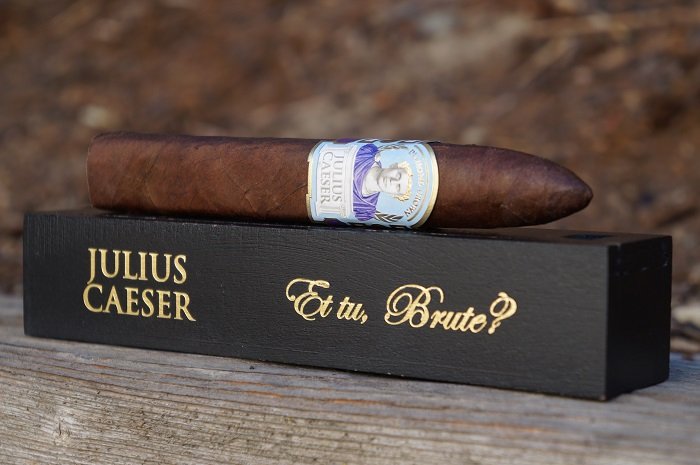 Aaron: The wrapper on the Diamond Crown Julius Caeser Et tu, Brute? is medium brown, has a fine tooth to it and also a network of small, lightly raised veins present. The seams are smooth in the box-pressed area but slightly raised on the taper. The tapered head is well finished. The band is the traditional design for the line. The aroma from the wrapper is lightly musty wood while the foot brings a full mix of stone fruit sweetness and wood. The pre-light draw brings lightly musty, aged cedar along with a mild spiciness on my lips.
Seth: While I am not crazy about a cigar transitioning from a super pressed offering to a round tapered head, the Diamond Crown Julius Caeser Et tu, Brute? is constructed wonderfully. It is nearly perfect. Beautiful Colorado Maduro wrapper that is oily and toothy. Small to medium sized veins throughout. Firm in texture. Aromas of cedar, earth, stone fruit and barnyard on the foot and tobacco, wood and leather notes on wrapper.
John: The Diamond Crown Julius Caeser Et tu, Brute? is presented in a shrink wrapped wooden coffin. Inside are foam inserts that protect the cap and foot. The cigar is cellophaned, and there is no UPC sticker. Additional complications included a box pressed shape. For aromas off the wrapper, I could detect bread, light wood and spices. From the foot, there was mild hay and sweet tobacco. 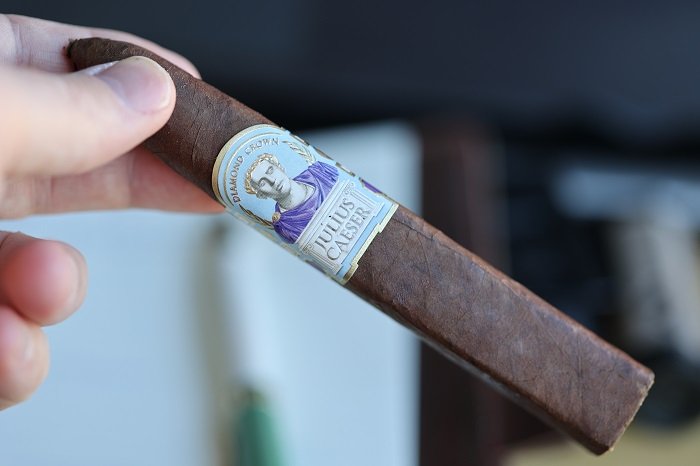 Aaron: The cigar begins with toasted cedar and light mustiness. At a quarter inch in, a mild baking spice joins the profile. At a half inch in, the toasted cedar takes on an aged profile. The retrohale is toasted, aged cedar and mustiness. At an inch and a quarter, the toast level has increased a bit. As the third comes to a close, the profile is an above medium level toasted cedar, light mustiness and mild baking spice. The strength in this third was slightly below medium.
Seth: The first third starts out with a lovely white pepper and spice profile. I am picking up toasted nut qualities as well, and there are touches of wood and earth present on the finish. There is this faint sweet cedar profile that is enjoyable. Medium to medium-full in strength and body.
John: The first few puffs greet me with flavors of creamy leather, tobacco and some delayed mild spices and tobacco that linger into the post draw. Some espresso develops under the main profile as it progresses. There’s also some muddled cherry like stone fruit through the retrohale. 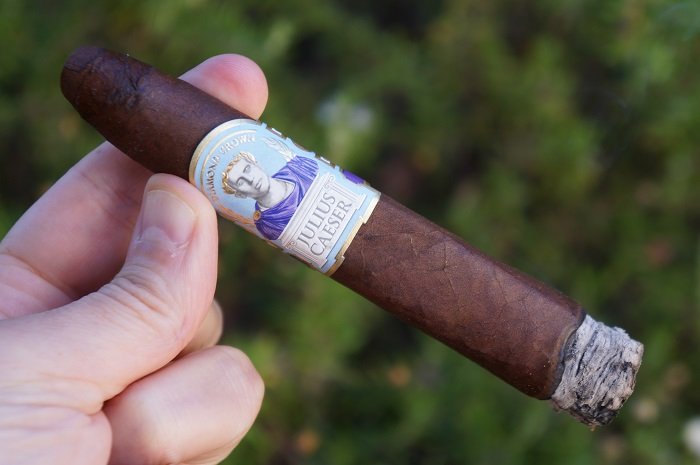 Aaron: The second third shows the body becoming a bit fuller. The retrohale remains toasted, aged cedar and mustiness. At an inch in, a light, dry earth joins the profile and the mustiness picks up a bit. As the third comes to a close, the profile is toasted, musty cedar with light, dry earth and baking spice in the background. The strength in this third bumped up to medium.
Seth: The second third shows a continuation of those white pepper spice notes, and they are paired with wood and leather. There are faint earth notes present as well on the finish, and I am picking up sweet nut, coffee and stone fruit notes as well. Like before, between medium and medium-full in strength and body.
John: Tobacco sweetness and creaminess takes the cigar into the second third. There’s still some mild stone fruit and earth on the post draw. Sweet wood settles into the center of the profile as the cigar establishes itself. Baking spices are present on the retrohale at medium strength. By the halfway point, the profile is wood forward with most of the complexity having fallen off. Baking spices return to the retrohale in the bottom half, mixing with the wood. Not long after, earth hits at the end of the draw, settling into the post draw. 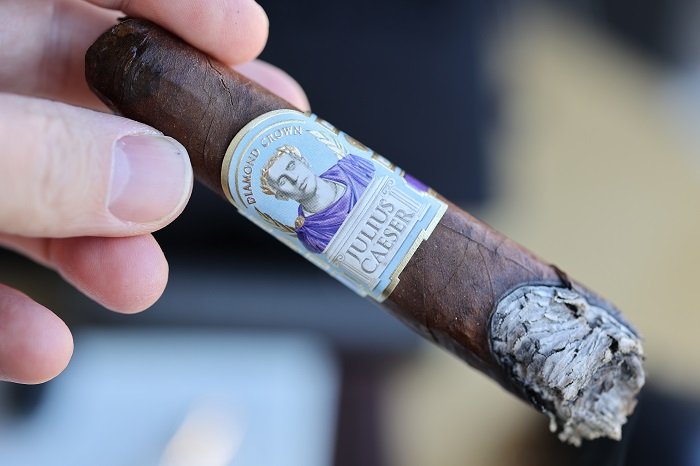 Aaron: The final third continues on with the profile from the second. At a half inch in, the dry earth picks up a fair amount. The retrohale is now toasted, musty cedar and light, dry earth. The cigar wraps up with the toasted, musty cedar and dry earth even with light baking spice in the background. The strength remained at medium.
Seth: The cigar finishes on a much darker path than the first two thirds. Strong earth and spice notes are present, and they are paired with wood and leather notes. There are mineral qualities present as well, and I would classify the cigar as smoking between medium and medium-full in strength and body.
John: The last third brings flavors of baking spices, wood and an earth finish that lingers on the post draw. As the cigar progresses, hay develops in the center of the profile. 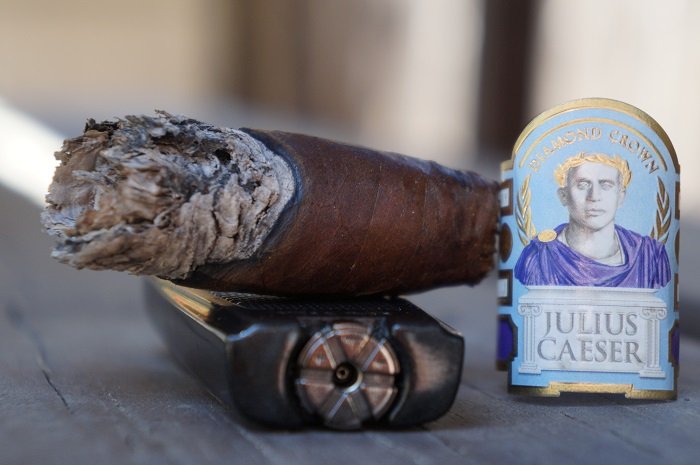 Aaron: The burn was a bit wavy throughout and required one touch-up to keep things moving along. The ash held on through each third.
Seth: Nice burn throughout.
John: The burn was uneven at the start, eventually requiring a touch-up. It became uneven again in the second third, requiring another touch-up. A crack at the cap formed and inspecting the cigar, the bottom half felt quite underfilled. So overall, while the burn was good, the construction had significant flaws. 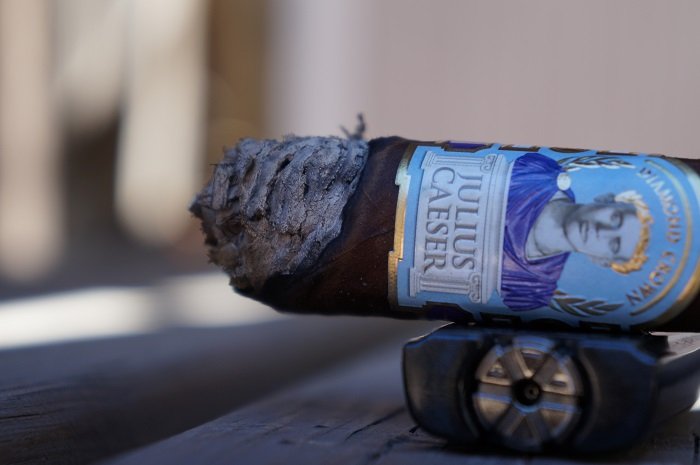 Aaron: The draw was slightly tighter than I prefer, but didn’t cause any issues with the smoking experience.
Seth: Nice draw.
John: The draw was perfect, right in the ideal zone.

Aaron: The flavor profile was pretty linear throughout as it was focused on toasted cedar, mustiness and baking spice with the addition of dry earth around the midway point. The Diamond Crown Julius Caeser Et tu, Brute? just didn’t provide a flavor profile that really grabbed my attention. Having reviewed the Robusto previously, the flavor profile paled in comparison to that vitola. The price point for this special vitola is quite high, and with the experience I had, I don’t see myself coming back to this. For anyone interested in trying this line, I would steer them towards the Robusto.
Seth: I was not a fan of the Diamond Crown Julius Caeser Et tu, Brute?. The flavor profile seemed much stronger than what is typically delivered with the Julius Caeser line, and that made me have a negative feeling towards the Shark vitola. Is it possible that Fuente does too good of a job tapering their Shark vitolas so that I do not care for the massive amount of smoke being produced? Perhaps I need to cut more from the head. Wood, earth and strong pepper spice notes throughout. I prefer the traditional vitolas for the line and find the flavor profile delivered there to be more balanced and enjoyable.
John: The Diamond Crown Julius Caeser Et tu, Brute? had some highlights in the first third with interesting complexity, but lost most of those notes by the second third, leaving me with a fairly average experience for two thirds of the cigar. Cigars are a handmade product, so occasionally there will be construction issues, and that seemed to be the case here. Based on the amount of underfill towards the cap, I’m fairly confident that this was the cause of the cap cracking. I’m sure that the underfill would have only harmed the flavor performance. I would smoke another Et Tu Brute? again if I had the opportunity, if only to see whether the flavor performance could live up to what the first third offered. Total smoking time was 1 hour and 58 minutes.