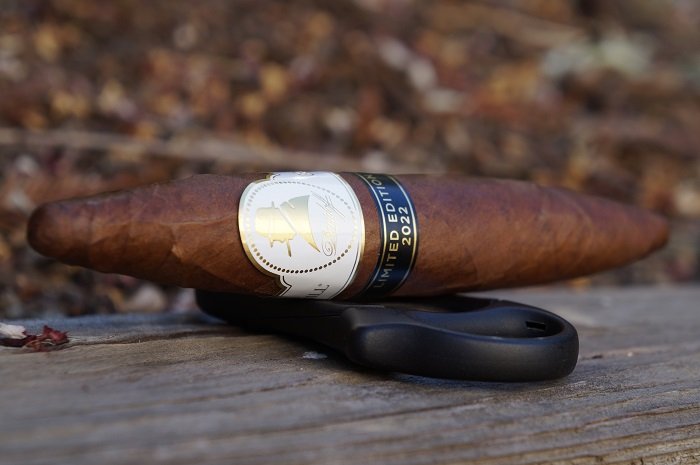 Aaron: The Davidoff Winston Churchill Limited Edition 2022 is a fat perfecto with a wrapper that is medium brown and has a network of decently raised veins. The seams are smooth is some areas and raised in others while the tapered head is well finished. There are two bands, with the primary being the traditional design for the brand in a white and gold color combination. The secondary band is a strip band in black and gold that designates it as a limited edition and the year. The aroma from the wrapper is a mix of wood and damp carboard while the foot opening is too small to get a sense of the filler aromas. The pre-light draw brings a slightly musty cedar along with a mild spiciness on my lips.
Seth: A beautiful perfecto, the Davidoff Winston Churchill Limited Edition 2022 is amazing from tapered head to tapered foot. The cigar is firm throughout, and the wrapper sports small to medium sized veins. There is a nice bit of softness with squeeze, and the wrapper is slightly oily to touch. Colors of marbled brown, it is between Natural and Colorado Maduro in coloring. Aromas of damp wood, barnyard, leather, hay, spices and fruit.
John: The Davidoff Winston Churchill Limited Edition 2022 comes in cellophane, has a UPC sticker with an integrated tear point so it remains intact when the cellophane is opened, and is in a perfecto vitola. The cigar is double banded with a “Limited Edition 2022” secondary band. Aromas form the wrapper included dry wood, sweet hay and a mild barnyard. Since the perfecto forms a barely open foot, there was nothing perceptible.
Jiunn: The Davidoff Winston Churchill Limited Edition 2022 has an even Colorado wrapper shade. Veins are well pressed, seams tight, bunch and roll even and head well wrapped. Aromas from the wrapper tell faint hay and cedar. Cold draws tell cedar shavings. 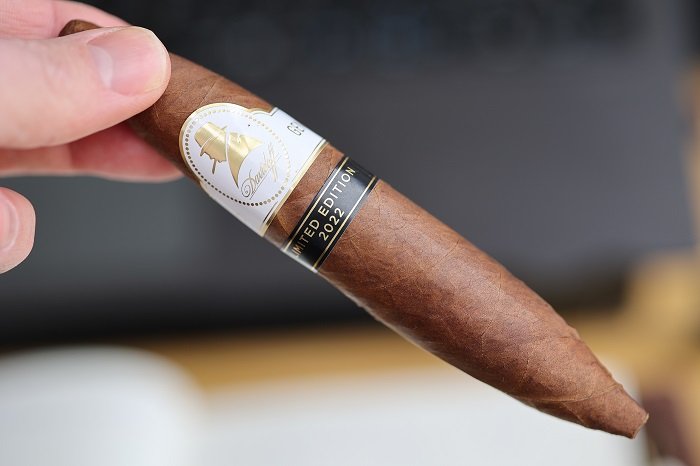 Aaron: The cigar begins with musty cedar and a very mild baking spice. At a quarter inch in, the mustiness gains a mushroom component. At a half inch in, the cedar becomes lightly toasted. The retrohale beings toasted cedar and light amounts of mushroom mustiness and minerality. At an inch in, some minerality joins the profile and the mustiness has begun separating itself from the toasted cedar. At an inch and a quarter, the toast level picks up. As the third comes to a close, the toasted cedar is up front with some mushroom mustiness and minerality a bit behind and a light baking spice in the background. The strength was slightly below medium.
Seth: The first third starts out by delivering a sweet citurs profile that is paired with some creaminess and coffee notes. I am picking up some lemon peel and it is paired with this light pepper quality. Short finish. Bits of barnyard and cedar on the finish as well. Medium in strength and body.
John: The first third starts with a medley of earth, baking spices and wood. Baking spices and wood combine on the retrohale in equal strength. Some lingering baking spices develop on the post draw, sitting on the tip of my tongue. As the cigar progresses, bread tries to break through the baking spices on the retrohale. Some time later, the wood takes on a mossy character. By the halfway point, wood is the primary flavor driver with mild tannins providing accent notes.
Jiunn: The first third opens with hay and dry red pepper spice that does a good job of layering the tip of the tongue. Cedar and lightly toasted nuts show up once the cigar reaches its main ring gauge. Retrohaling deepens the dry red pepper spice as well as gives a richer nuttiness. The finish is lengthy, having dry red pepper spice and cedar linger on for minutes. Strength is medium-full, body is medium. 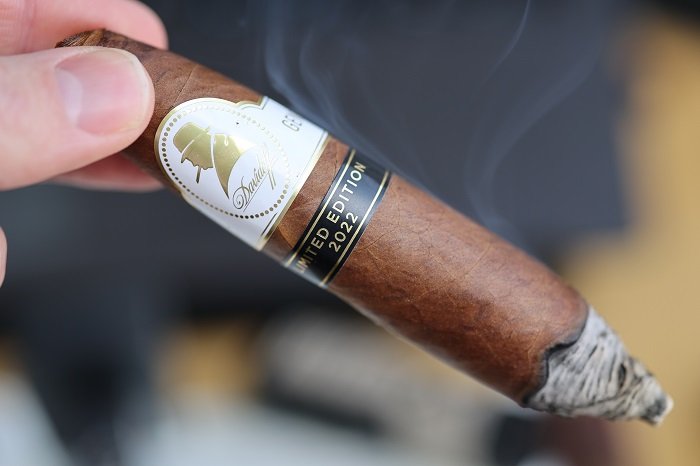 Aaron: As the second third begins, the baking spice has departed. At a quarter inch in, the mushroom mustiness is now even with the toasted cedar up front while the minerality is now mixed with earth. At a half inch in, all of the components are even. The retrohale is now musty, toasted cedar and earthy minerality. At an inch and a half in, the earthy minerality now has a slight lead in the profile. As the third comes to a close, the earthy minerality remains slightly ahead of the musty, toasted cedar. The strength bumped up to medium.
Seth: The second third delivers a flavor profile that is fairly in line with the first third. I am getting a lot of coffee and cream notes, and they are paired with this soft lemon pepper quality. Cedar and hay notes present as well on the finish. Medium in strength and body.
John: Wood with tannic components, bread and baking spices lead off the second third, as spicy wood carries the profile into the post draw. Those spices are at medium strength between draws. As the second third settles in, it becomes wood forward with bread and mild spices as supporting notes. As it progresses, there are still some mossy edges underneath the other combinations.
Jiunn: A harsh wood bitterness forms, overcasting the entire profile. This bitterness mixed with hay, cedar and nuts is very contrasting and downright unpleasant. Strength and body continues to be medium-full and medium, respectively. 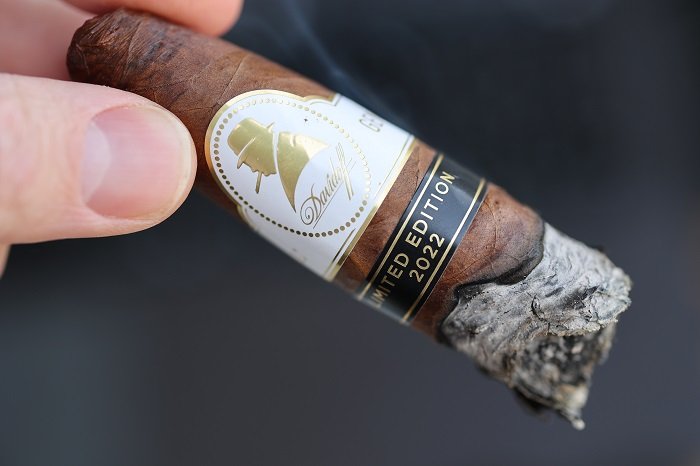 Aaron: As the final third begins, all of the components become even again. At a half inch in, the earthy minerality moves back to the front with a larger gap then it had before to the musty, toasted cedar. The retrohale is an even mix of earthy minerality and musty, toasted cedar. At an inch in, the existing components become even once again and a light vegetal note joins the profile. As the cigar wraps up, the profile remains an even mix of earthy minerality and musty, toasted cedar with a light vegetal note in the background. The strength remained at medium.
Seth: The final third is right in line with the first and second third. Medium in strength and body with a flavor profile of cedar, cream, lemon citrus and pepper. Nice bit of coffee notes on the finish as well.
John: The last third begins with mossy wood, mild tannins, spicy wood and a dank musty and wood combination into the post draw. As it settles in, tannic wood defines the post draw.
Jiunn: To my surprise, that harshness from the second third has dissipated. The harshness is instead replaced by sharper minerals. So at this point, its sharper minerals, hay, cedar and nuts. Strength and body finishes the same medium-full and medium, respectively. 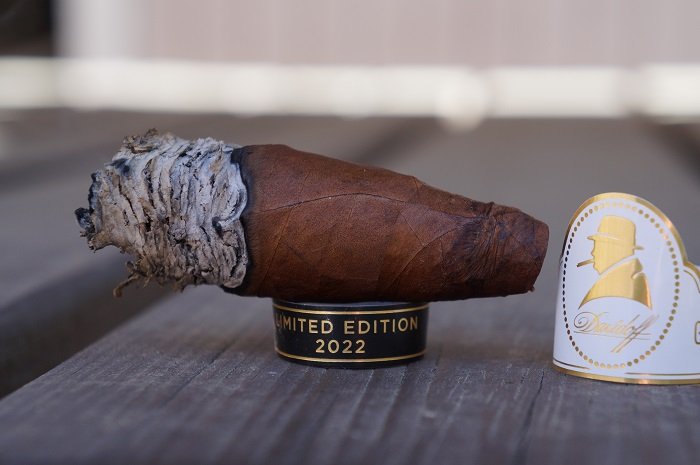 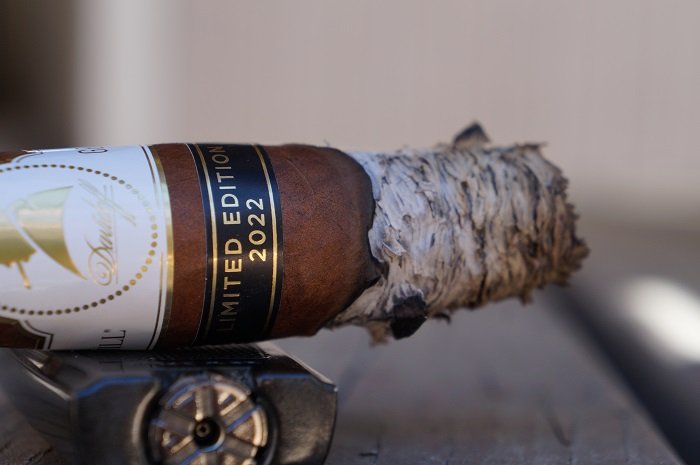 Aaron: The draw was pretty snug throughout and an additional cut and draw tool provided no relief.
Seth: Perfect draw.
John: The draw had some noticeable resistance to it, roughly 2-1/2 to 3 notches into the resistant spectrum.
Jiunn: The draw was also spot on, giving the best balance between air flow and resistance.

Aaron: The cigar began with musty cedar and a very mild baking spice. A mushroom note joined the mustiness fairly quickly and some toastiness joined the cedar a bit later. Some minerality joined later. The second third saw the minerality mix in with earth. The final third saw a light vegetal note join in. Overall, the Davidoff Winston Churchill Limited Edition 2022 was pretty boring as the flavor profile just mixed up the fullness of components at times and the flavors presented weren’t anything exciting. The snug draw was a bit of a detractor, but not anything serious. With this being a limited edition and having a high price point, the experience just isn’t worthwhile and not something I have much interest in coming back to.
Seth: The Davidoff Winston Churchill Limited Edition 2022 was a beautiful perfecto that smoked wonderfully. From beginning to end the draw and burn were perfect. In terms of flavors though, average. I found it to be an improvement over the 2021 Winston Churchill LE, but I thought 2021 was a complete disaster. Nowhere near the level of the 2019 Robusto and even the 2016 Raconteur. At this point I don’t think Davidoff needs to be changing the vitola and blend every year with this limited release. That is if it does continue in 2023. Do something with the 2016 and 2019 blend and leave it as a limited annual release.
John: The Davidoff Winston Churchill Limited Edition 2022 delivered a lot of notes in the first third that would engage enthusiasts and die hard Davidoff fans, but the remainder of the cigar is not quite up to the same task for flavor complexity. No doubt that fans of the brand will find enough there to please them, for the rest of us, it isn’t quite enough to warrant “Limited Edition” pricing. The burn was perfect, and the draw had some resistance to it, likely by design of the perfecto shape. Total smoking time was 1 hour and 35 minutes. For my money, I’d rather pick up the Serie R or the Late Hour series.
Jiunn: Another expensive limited edition Davidoff in the Davidoff Winston Churchill Limited Edition 2022, another let down. Davidoff needs to seriously re-consider the blending person(s)/team. With all that great aged tobacco, there is no reason to churn out unimpressive blends, especially at these luxury price points. I guess I’ll have to look forward to the next one. But honestly, I don’t know how many more times I want to.