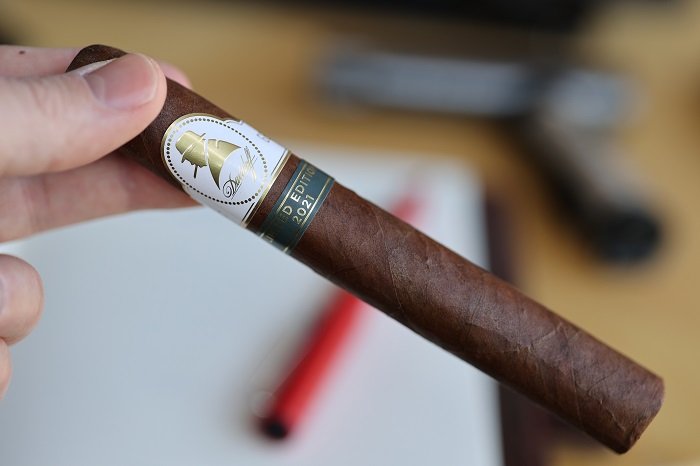 Aaron: The wrapper on the Davidoff Winston Churchill Limited Edition 2021 is a very uniform medium brown with a few slightly raised veins present. The seams are a bit lifted as is the top cap. There are two bands, with the primary being the traditional white and gold design. The secondary is a dark gray and gold strip that designates it being an LE for 2021. The aroma from the wrapper is a light wood while the foot brings wood, stone fruit sweetness and mild spice. The pre-light draw brings a light, aged cedar along with a mild spiciness on my lips.
Seth: The Davidoff Winston Churchill Limited Edition 2021 is finished with a wrapper that is somewhere between Natural and Colorado in coloring. There are small to medium sized veins present throughout, and the cigar is firm throughout. It is not super attractive in presentation, but it has this naturally dark wrapper which is nice. The wrapper of the cigar has an aroma of leather, tobacco and spices, while the foot is giving off notes of earth, raisins and spices.
John: The Davidoff Winston Churchill Limited Edition 2021 is sold in cellophane, and has a UPC sticker holding the cellophane closed and designed with a perforated tear point. The cigar is double banded, and the wrapper has a nice oily sheen to it. Aromas from the cigar included bread, light wood and some sweetness. From the foot, I was able to pick out light, sweet tobacco and hay.
Jiunn: The Davidoff Winston Churchill Limited Edition 2021 has an even shade of tan leather. Veins are well pressed, seams tight, bunch and roll even and head well wrapped. Aromas from the wrapper give a plethora of barnyard and sweet bread. Aromas from the foot give white pepper and sweet bread. Cold draw gives leather, hay and biscuits. 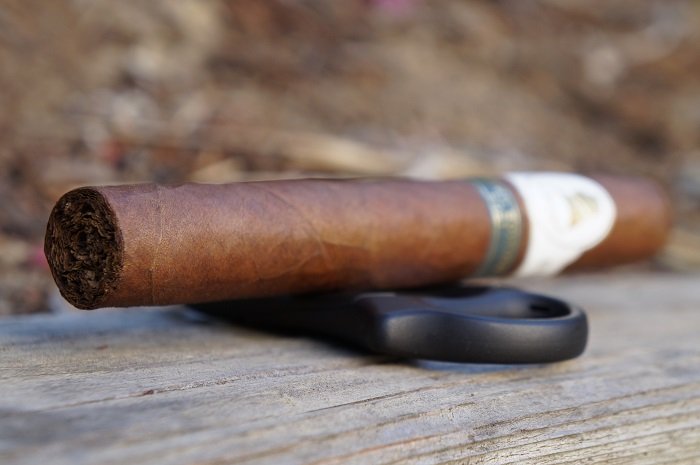 Aaron: The cigar begins with a mix of wood and cinnamon. At a quarter inch in, some mustiness joins the profile and the cinnamon transitions to more of a general baking spice. At an inch in, the wood becomes more defined as oak and the mustiness is paired with it, while the baking spice is now mild and in the background. The retrohale consists of lightly musty oak. As the third comes to a close, the musty oak remains up front while the baking spice has transitioned to black pepper and is now sitting not far behind the musty oak. The strength in this third was right at medium.
Seth: The first third begins by delivering some spice notes and I am getting some cinnamon and red pepper. There are dry earth qualities present as well, and it is paired with this musty wood and damp barnyard profile. Flavors of raisins are present on the finish. In terms of strength and body, I would classify the cigar as medium to medium-full in strength and body.
John: The first third got things started with sweet tobacco, mild spices and cedar to finish. On the post draw, spices ramp up to medium-full strength almost immediately. Although the post draw has intense spices, the overall flavor profile is quite soft compared to the flavor intensity and strength of the 2019 release. As the cigar progressed, medium strength baking spices and bread settle into the retrohale. The profile started to come together around the 25 minute mark.
Jiunn: The first third has a good amount of qualities going for the cigar. Instead of typically easing into the profile with grassiness and hay, it starts decently punchy with classic Davidoff style grassiness/hay, white pepper coating the entire palate, sweet bread and floral undertones. Retrohaling deepens the white pepper spice and also adds a layer of minerality. The finish is medium length with mainly cedar on the back end. Strength is medium-full, body is medium 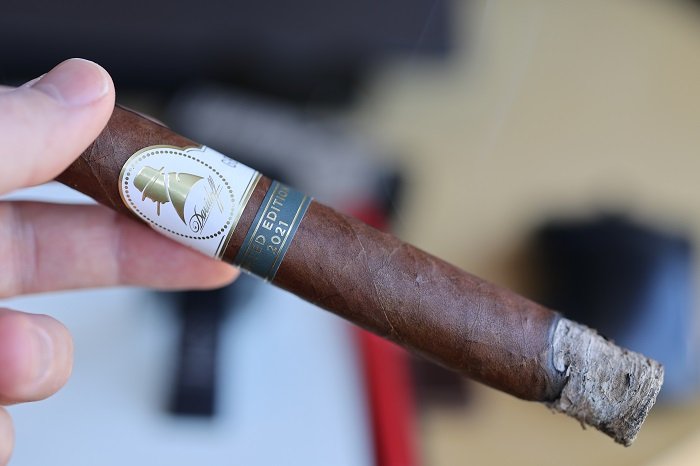 Aaron: The second third continues with the musty oak up front and the black pepper a bit behind. The black pepper has a lengthy finish. At a half inch in, the black pepper has mellowed a bit. The retrohale is a fairly full delivery of musty oak. At an inch and a half, the oak gains a toasted note. As the third comes to a close, the toast note has become fairly heavy. The strength in this third has bumped up to slightly above medium.
Seth: The second third shows some transitioning, and I am picking up notes of leather, musty wood and cream. The barnyard notes are present, earth as well, and they are showing damp qualities. Humid in a hot barn in the summertime. That’s what comes to mind. There are some sugar and pepper notes on the finish. Like before, medium to medium-full in strength and body.
John: Bread, sweetness and medium strength baking spices combined on the retrohale moving into the second third. A mild wood settles into the middle of the profile. By the halfway mark., earth and mild tannins are defining the finish.
Jiunn: The second third shows more cedar and minerals. Also, the profile picks up a consistent creamy cherry note, which dramatically helps it from being too earth driven. Strength and body remains medium plus and medium, respectively. 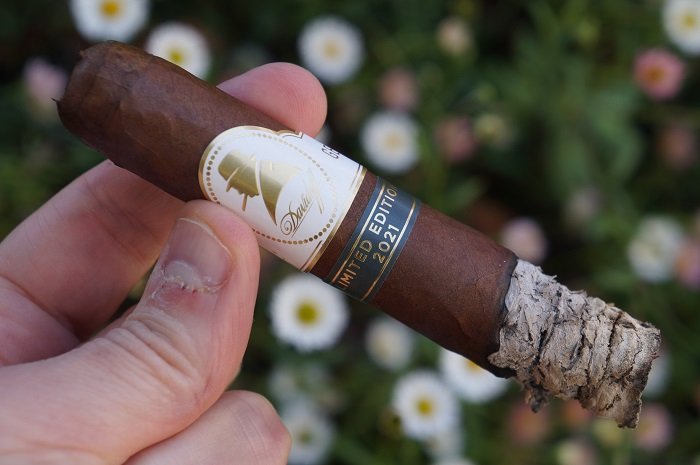 Aaron: The final third continues with the musty and heavily toasted oak with mild black pepper in the background. The retrohale is now musty, toasted oak. The cigar wraps up with the musty and heavily toasted oak with mild black pepper. The strength in this third remained at slightly above medium.
Seth: The final third delivers a flavor profile of musty wood, roasted nuts and peppery spices. There are some damp leather qualities, and I am picking up earth notes on the finish. It has a sharp finish, and I would classify the cigar as medium-full in strength and body.
John: The profile is wood forward leading into the last third. The finish is the same tannic wood from the second third. As the cigar progressed, sweet spices move into the middle of the profile, as the tannic finish stepped up to medium strength. By the point the last third settled in, earth joined the profile also at medium strength.
Jiunn: The final third transitions to developing more cedar and sharper minerals. At the same time, there is still plenty of sweetness in bread. Strength and body finishes the same medium plus and medium. 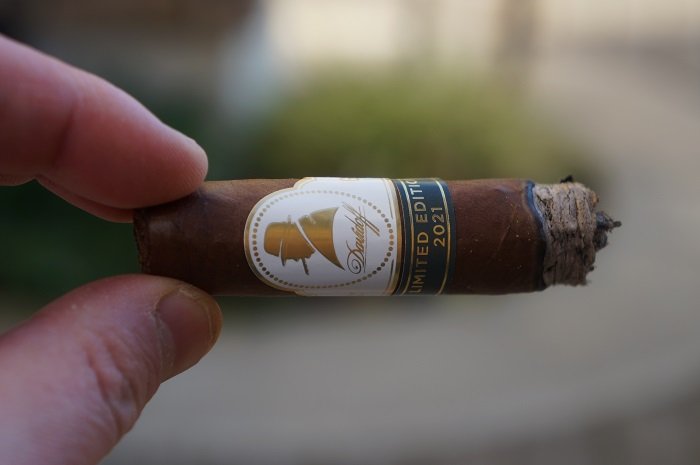 Aaron: The burn was a bit wavy throughout and required one touch-up when a quarter of the wrapper didn’t want to burn. The cigar also went out once, requiring a re-light.
Seth: The burn was nice from start to finish. No problems. Nice construction.
John: The burn had some unbalanced burn in the first third, eventually correcting. Burn was straight through the second third, but struggling to stay lit by the halfway point. No interventions were necessary.
Jiunn: Perfect burn performance. Even burn, cool burning temperature, solid ashes and ample smoke production. 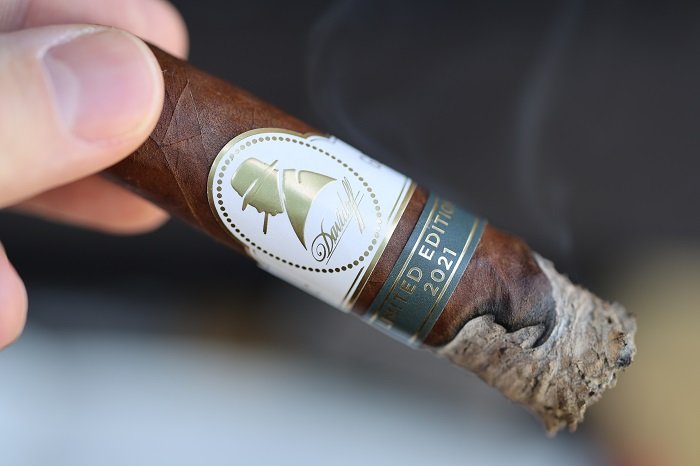 Aaron: The cigar had a nice start with the cinnamon/baking spice supporting the oak, but once those supporting notes faded out and the black pepper joined, things became average and maintained that level the rest of the way. The strength level is a bit higher than the typical Davidoff profile, so for those that like a little more strength, it might be attractive. The price point is quite high, and based on that, in combination with the experience I had, I don’t really see coming back to this Davidoff Winston Churchill Limited Edition 2021.
Seth: I was not impressed with the Davidoff Winston Churchill Limited Edition 2021. And, when you compare it to the 2019 release, I think it was a major disappointment. The flavor seemed muddled throughout and the cigar never took me in a particular direction. The second third was the highlight of the cigar, but it was still missing pieces, and it was followed by an awful final third. Davidoff has seemed off their game recently with limited and special releases, and this cigar confirms that. It is time to improve or stop all together.
John: The Davidoff Winston Churchill Limited Edition 2021 was a good cigar, but I found myself asking if the flavor performance was enough to warrant the premium price. It’s personal preference, but I found the 2019 release to be more consistent throughout all the thirds, as well as delivering a more complex, albeit much stronger profile. As one would expect from a Davidoff, the construction is fairly flawless. I would smoke another Winston Churchill Limited Edition 2021, but for the price tag I’d be more likely to opt for one of Davidoff’s more affordable and less limited offerings. Total smoking time was 2 hours and 32 minutes.
Jiunn: Hey y’all, I smoked a review cigar that I genuinely liked for the entire smoking experience. It’s been so long! The Davidoff Winston Churchill Limited Edition 2021 was engaging, transitioned well and was just down right delicious. For such a steep price point, this will be a great candidate to pick up at a nice cigar lounge and enjoy a couple hours with.