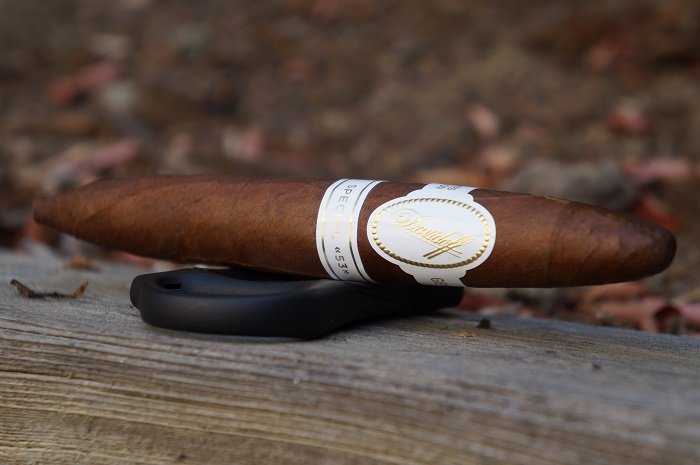 A medium brown wrapper with some lightly raised veins covers this uniquely shaped Davidoff Special 53 Capa Dominicana. The seams are slightly raised but still a bit hard to see and the head is finished with caps that also have some slightly raised edges. There are two bands with the primary being the traditional white label design and the secondary strip band denotes the line name. The pre-light draw from the wrapper is a light barnyard and the foot opening is so small that I’m unable to pickup anything from it. The pre-light draw brings a lightly sweet cedar. 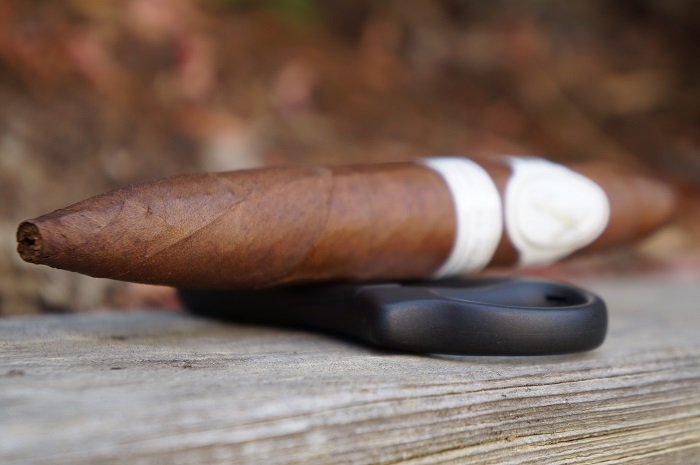 A beautiful perfecto, the Davidoff Special 53 Capa Dominicana is finished with a lovely Colorado colored wrapper. It has this antique brown with reddish hues that is great. There are medium veins present throughout and they are noticeable to touch. There is a leathery texture with the wrapper and I am getting aromas of hay, cocoa, spices and leather. 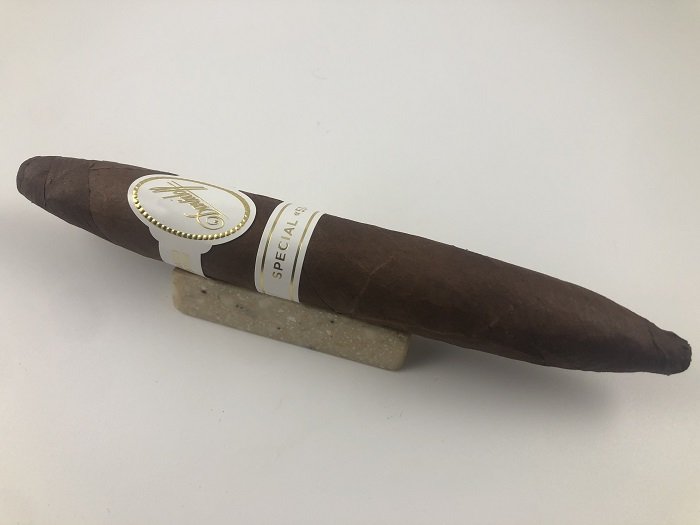 The Davidoff Special 53 Capa Dominicana is double banded with the Davidoff primary band and the Special <<53>> secondary band. The wrapper is chocolate brown in color, with aromas of baking spices and cedar. Because of the Perfecto shape, the foot is quite small and I wasn’t able to pick out any specific aromas. 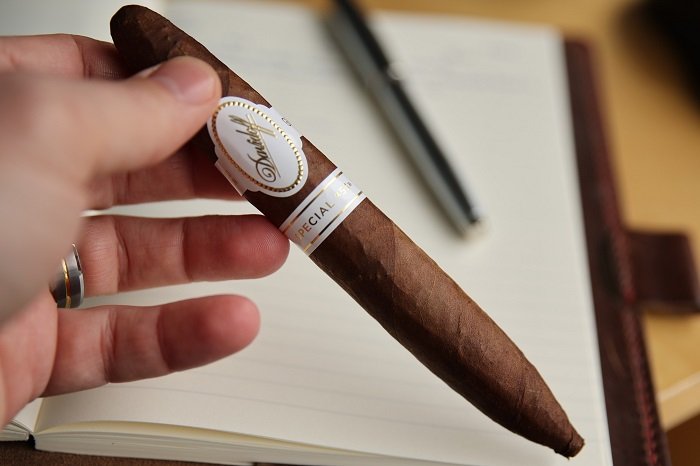 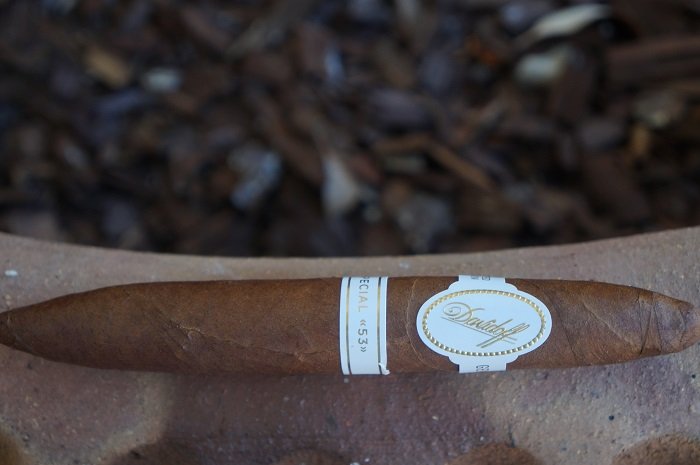 The cigar begins with musty cedar and light earth. At three quarters of an inch in, the mustiness gains a mushroom profile. The retrohale is musty cedar. At an inch and a quarter, a light baking spice joins the profile. As the third wraps up, the mushroom mustiness and cedar are even while the earthiness is right behind and the baking spice is further in the background. The strength is right at medium. 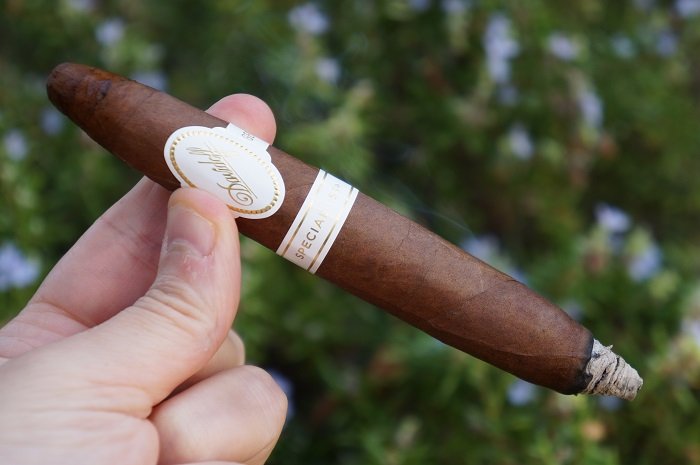 The first third begins by delivering strong spice notes, bits of cinnamon present, and it is accompanied by seasoned wood, black pepper and coffee bean notes. I would classify the cigar as being medium in strength and body as well. 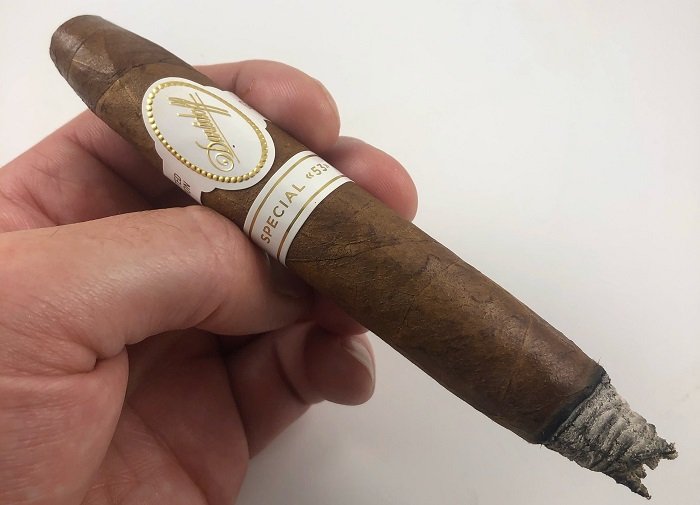 Grassy sweetness opens up the first third profile. Baking spices and cedar define the post draw. By the start of the shoulder of the cigar, baking spices and bread start to push through. As the cigar moves past the shoulder, mildly sour citrus is added to the flavor medley. 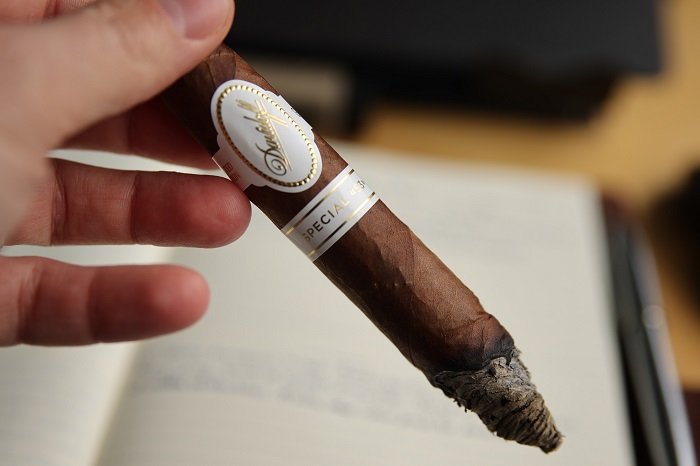 The first third opens with classic Davidoff hay/grass. Heading into the main ring gauge of the cigar, mushroom/fungus develops as well as over-extracted coffee, faint cherries and cedar. Once the cigar gets to the main ring gauge, the profile picks up a natural nutty and creamy sweetness. Retrohaling gives mainly subtle red pepper spice and cedar. The finish is a long and lingering over-extracted bitter coffee. Strength and body is medium. 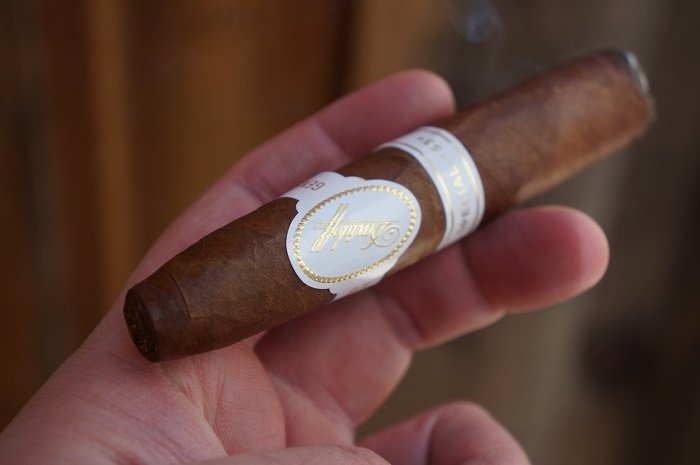 The second third continues on with the profile from the first. At a half inch in, the baking spice transitions to black pepper. The retrohale is musty cedar with light earth. At an inch and a quarter, the mushroom note has left the mustiness and the earth is now even with the cedar and mustiness. As the second third comes to a close, the cedar gains a light char. The strength in this third remained at medium. 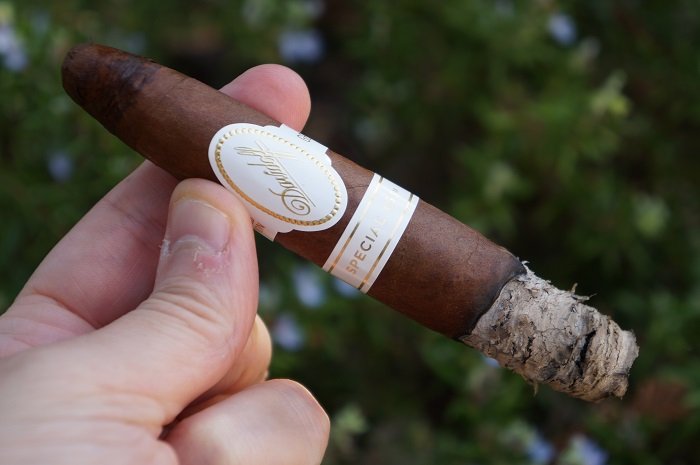 The second third delivers a flavor profile that shows qualities of pepper and cinnamon spices with seasoned wood. I am picking up faint earth and barnyard qualities, but there is a harshness present as well. It has increased to a medium-full strength and body level in this third. 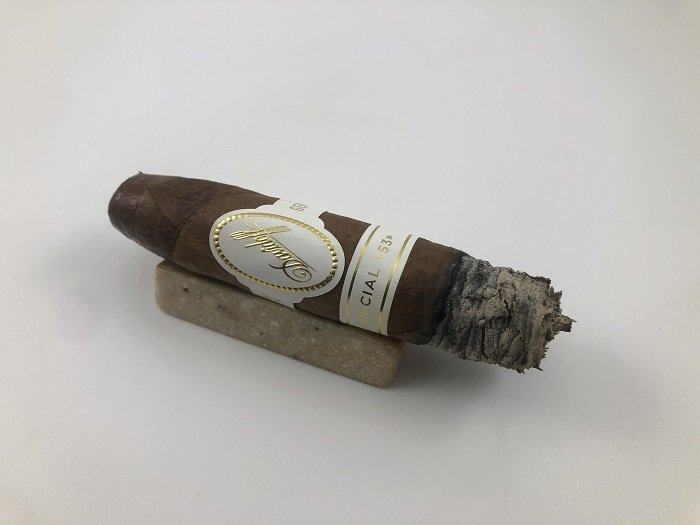 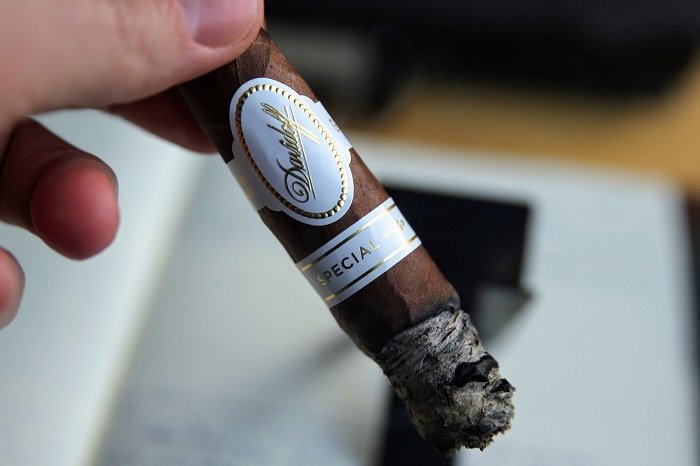 The second third tunes down the enjoyment level for one main reason. The over-extracted bitter coffee shifts from being an accented note to more forceful note. This note being very invasive on the finish, loses out on the other flavors a bit too much. Strength and body remains medium. 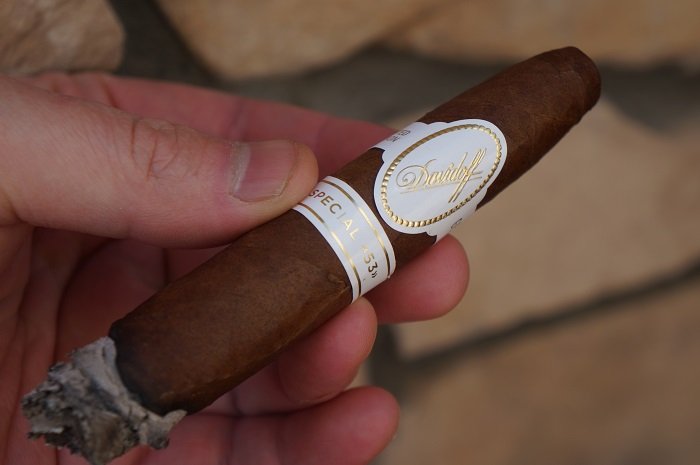 As the final third begins, the charred cedar takes a slight lead over the musty earth while the light black pepper remains in the background. The retrohale remains musty cedar and earth. The cigar wraps up with the charred cedar up front with musty earth right behind and black pepper in the background. The strength in this third bumped up to slightly above medium. 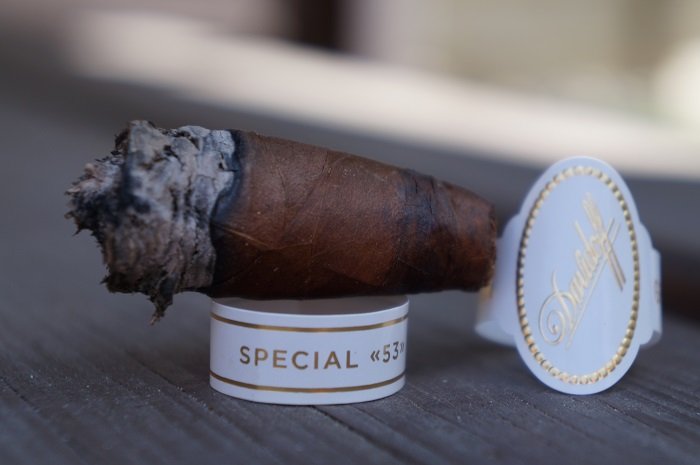 The final third shows the return of those first third notes. I am picking up strong coffee notes that are paired with cinnamon and pepper qualities. There is some seasoned wood as well and I am getting stronger cocoa notes in this third. The sharpness present in the second third has vanished and it is smoking around a medium level in strength and body. 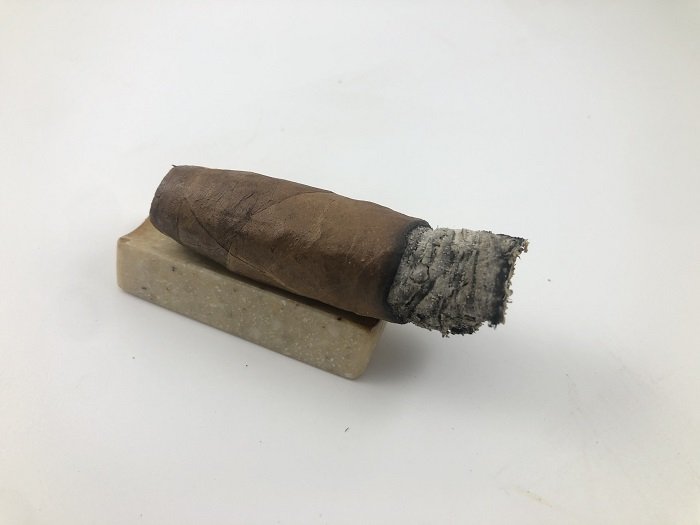 Cedar, mid profile earth and post draw toasted earth take the Special 53 Capa Dominicana into the last third. Baking spices join as the last third settles in, with some light bread coming through on the retrohale. By the middle of the last third, some bitter earth is present on the post draw. 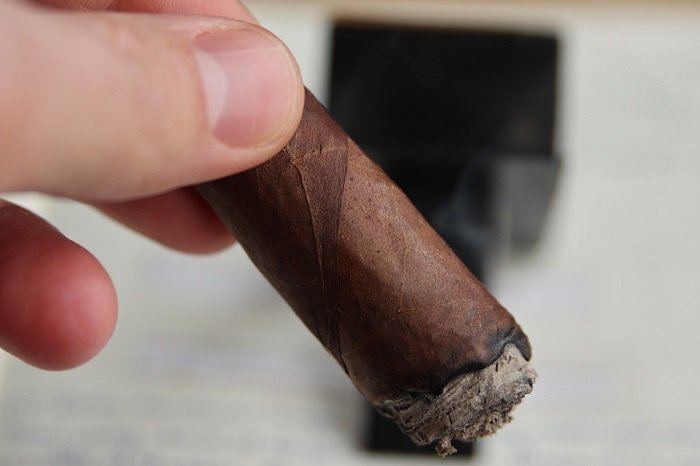 The final third has less of the bitter coffee note, but the profile feels a bit too mundane. The flavors being namely bitter coffee, cedar and leather, it doesn’t do enough to pull it out of being average. Strength and body finishes medium. 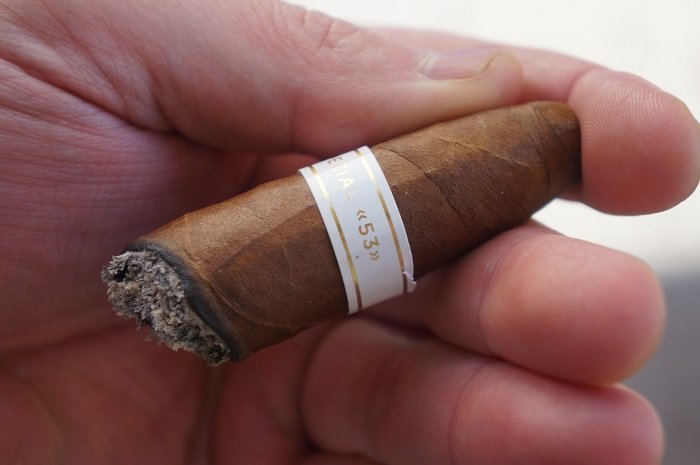 The burn line was a bit wavy, but always kept up with itself. The ash held on in inch and a half increments. 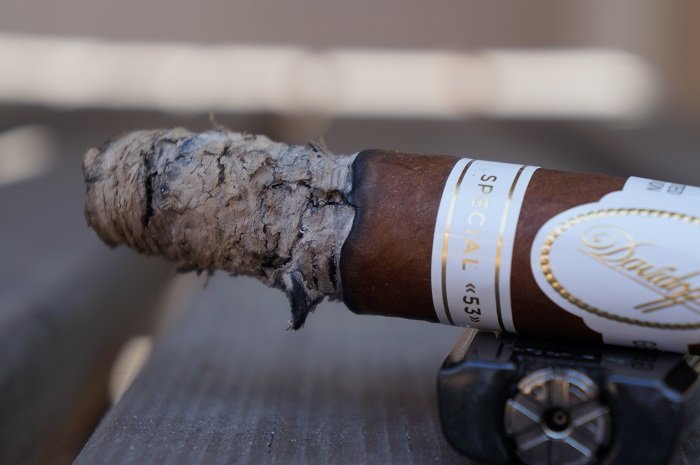 The burn was absolutely perfect on this perfecto from start to finish. 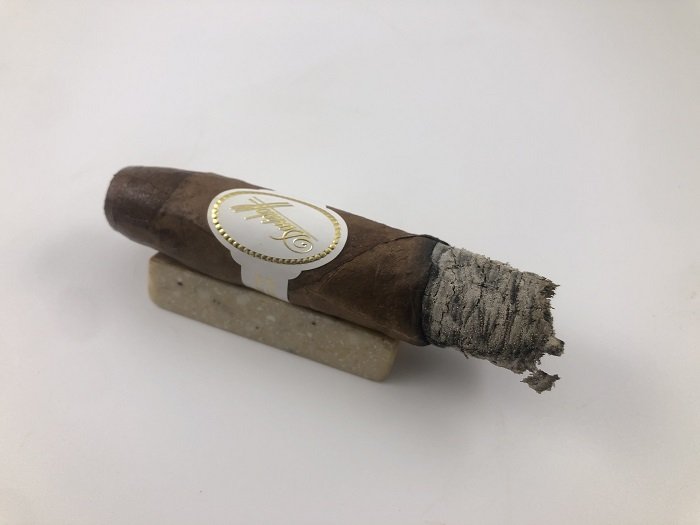 The burn was relatively straight throughout, with the ash holding on up to 1-1/2 inches at times. One thing I did note is that the bottom half of the cigar seemed fairly well filled, but the upper half towards the cap seemed somewhat squishy and underfilled. 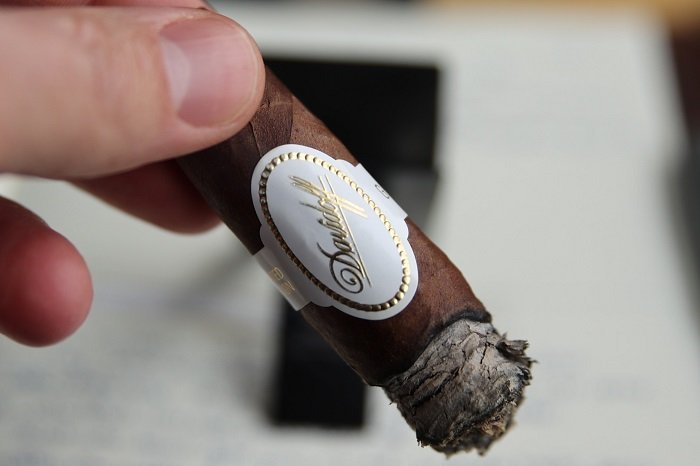 Burn performance had a couple issues. Main issue being an uneven burn, requiring three fairly major touch-ups within the first two thirds of the cigar. 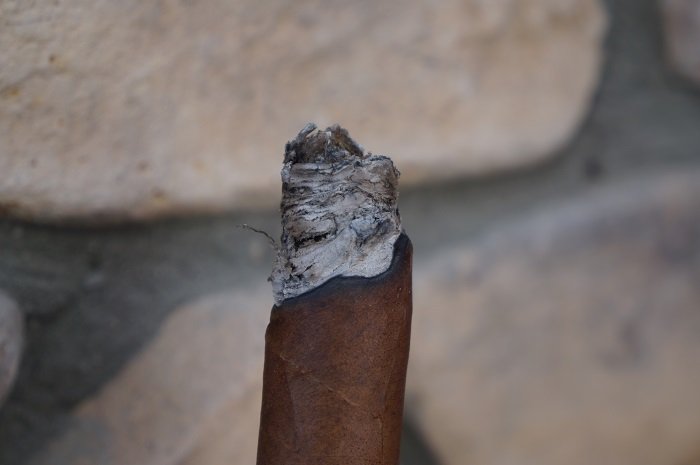 The draw was a bit tighter than I prefer, but didn’t cause any issues with the smoking experience.

The Davidoff Special 53 Capa Dominicana had a nice start with that traditional Davidoff mushroom mustiness. In the second third, the mustiness lost that mushroom note and some char joined the cedar which knocked things down a level and that continued through the rest of the cigar. With these limited editions, I’m always intrigued with what the profile will consist of, and was pleased with how it started, but it just couldn’t maintain it through the remainder of the cigar. The price point is very high, so for an overall average experience, it definitely puts a damper on things and makes it very likely that I won’t return to this one.

Like the burn, the draw was outstanding. Amazing throughout.

In the giant scheme of things, the Davidoff Special 53 Capa Dominicana is a good cigar. The perfecto smokes wonderfully and it produces flavors of cocoa, spices, coffee and wood. As a limited, special, and even Davidoff release, it is justified in saying the cigar is disappointing. I was hoping for a little bit more in the flavor department and that Davidoff could show an even better Dominican puro than they have released in the past. Then again, this is based off of the original 2002 release. I think in 2002 you could say this was a magical Dominican puro. With the advancement of the cigar smokers, the cigar could and should do more.

The draw was quite resistant to start, roughly 4 notches. It did open somewhat as I smoked to 3-1/2 notches but still well into the quite resistant spectrum. Just to rule out a cutting issue I did a second v-cut at the halfway point, and it had no impact on the draw.

My overall experience with the Davidoff Special 53 Capa Dominicana was slightly above average, which was quite surprising. Although it’s nearly impossible for every cigar and every brand from a cigar company to be good or better, Davidoff tends to put out a significant number of consistently good or better releases. This flavor experience, coupled with the price tag, will almost certainly move me towards a more consistent offering from Davidoff. Total smoking time was 1 hour and 50 minutes.

The draw however was perfect. Ideal air flow.

I rarely find a Davidoff that is anything less than “good.” For the high price points offered and the pedigree of Davidoff, I think it’s inexcusable to be anything less than good. Unfortunately, in the case of the Davidoff Special 53 Capa Dominicana, the cigar was average. The first third was great, giving familiar Davidoff-like nuances and complexities. But by the time it reached the second third, the profile crumbled into a mundane, unbalanced flavor profile, being namely over-extracted bitter coffee, cedar and leather. I guess you can’t win them all.