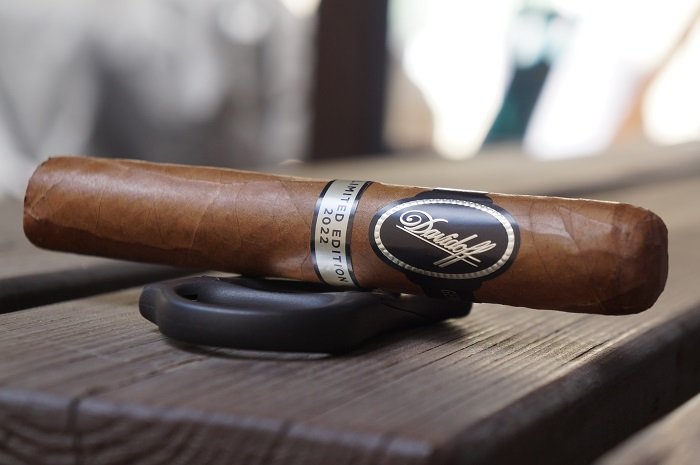 Aaron: The wrapper on the Davidoff Limited Edition 2022 Gran Toro is light brown with a few thick, raised veins. The seams are a bit raised while the caps are well applied. There are two bands, with the primary being the traditional band design for the brand, but with the black and silver color combination. The secondary band is silver and black and denotes it as a Limited Edition for 2022. The aroma from the wrapper is a light mix of wood and earth while the foot brings cedar and tobacco sweetness. The pre-light draw brings an airy and musty cedar along with a mild spiciness on my lips.
Seth: Finished with a smooth and oily wrapper, the Davidoff Limited Edition 2022 Gran Toro has a nice light marbled coloring. There is a bit of dark red here and there, almost stripes, but it is mostly this natural wood coloring. Classic Natural with some faded Colorado areas throughout. Few veins, but those present are medium to large. Aromas of sweet earth, cream, stone fruit and soft spices. Nice looking cigar, but nothing impressive.
John: The Davidoff Limited Edition 2022 Gran Toro comes in cellophane and has a tear tab integrated on the UPC sticker so the UPC remains intact when opened. The cigar is double banded with the secondary band indicating “Limited Edition 2022”. Aromas from the wrapper include faint lemon peel, bread and damp wood. From the foot, I was picking up on sweet tobacco, aged wood and a dusty character.
Jiunn: The Davidoff Limited Edition 2022 Gran Toro has a gorgeous oily Colorado Claro wrapper shade. Veins are well pressed, seams tight, bunch and roll even and head well wrapped. Aromas from the wrapper tell cedar and barnyard. Aromas from the foot give mixed nuts, faint dry red pepper spice and barnyard. Cold draws reveal cedar, hay and tart apricots. 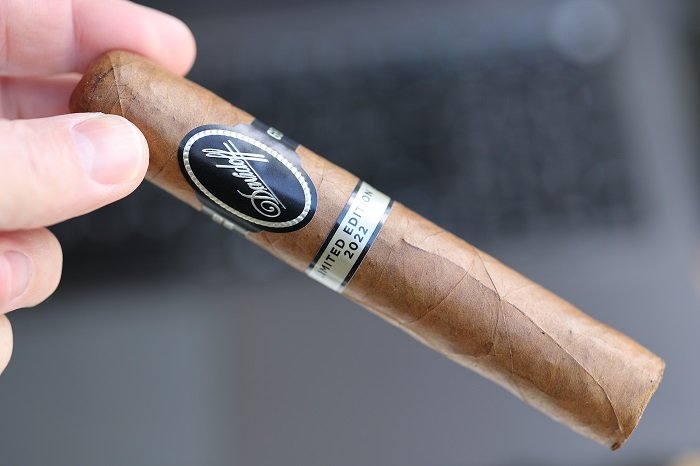 Aaron: The cigar begins with toasted wood and some minerality. At a quarter inch in, a light mustiness joins the profile. At three quarters of an inch in, the wood becomes more defined as oak. The retrohale is lightly toasted oak with mild amounts of earth and mustiness. At an inch in, some earthiness has joined with the minerality. As the third comes to a close, the profile is musty, toasted oak with earthy minerality a bit behind. The strength was slightly below medium.
Seth: The first third opens with some musty wood notes that are paired with sweet spices, leather, rich earth and barbeque meat flavors. There are some faded hazelnut qualities as well, and the cigar is smoking just below medium in strength and body.
John: The first third opens with mild tobacco sweetness, bread and wood as mustiness carries into the post draw. Some honey sweetness comes through on the retrohale at a subdued light strength. I would describe the opening here as a more classic Davidoff profile. As the first third progresses, wood joins into the post draw finish, bringing with it mild tannic accents.
Jiunn: The first third’s flavor delivery is soft and smooth. Plenty of white flavors, being driven by mixed nuts, cedar, hay and a slight effervescence. Retrohaling kicks it up a notch, bringing a toastiness in cedar, light dry red pepper spice and greater mixed nuts. The finish is medium length, with cedar and hay. Strength and body is medium. 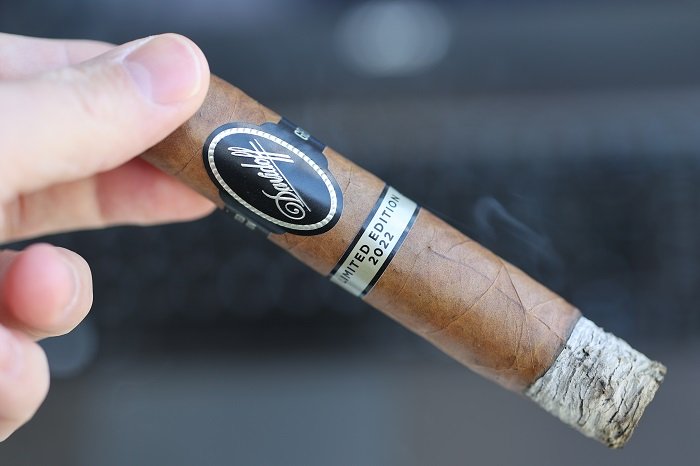 Aaron: As the second third begins, the earthy minerality becomes even with the musty, toasted oak. At a half inch in, the body of the cigar picks up a bit and becomes a bit dry. The retrohale is musty, toasted oak with some earthy minerality in the background. As the third comes to a close, the profile remains an even mix of musty, toasted oak and earthy minerality. The strength bumped up to medium.
Seth: The second third delivers a flavor profile of coffee, earth, cocoa and barnyard. Pepper spice notes present with leather, tobacco, oak and hay as well. Medium in strength and body. Cigar is on the rise with strength and body. Complex flavor profile, with a little bit of everything.
John: Sweet wood combines here with mild mustiness. Some trailing sweetness combines with the wood to carry into the post draw. Approaching the halfway mark, mild tannic accents return to the end of the draw.
Jiunn: The second third is still overall soft and smooth, but at this point, it feels like the profile is becoming a bit bland and uneventful. Flavor set is still consistent with mixed nuts, cedar, hay and slight effervescence. Strength and body is unchanged at medium. 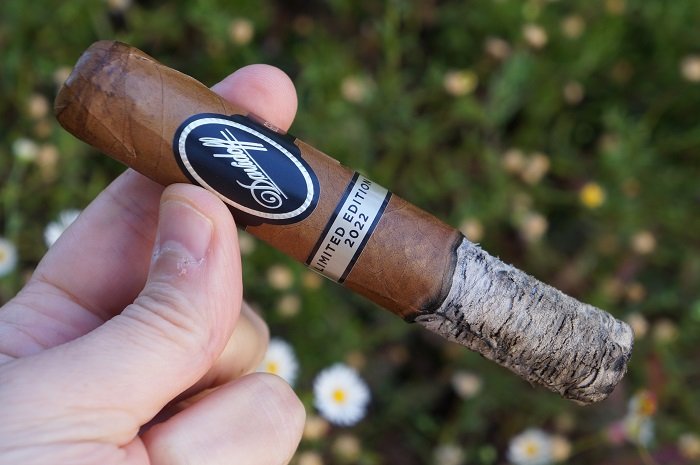 Aaron: As the final third begins, the toast level picks up a fair amount. At a half inch in, a light vegetal note joins the profile. At three quarters of an inch in, a light bitterness becomes present. The retrohale is now an even mix of toasted oak and earthy minerality. At an inch in, the mustiness has departed. At an inch and a quarter, the vegetal and bitter notes pick up a bit as the cigar is warming up. As the cigar wraps up, the profile is an even mix of toasted oak and earthy minerality up front with vegetal and bitterness a bit behind. The strength bumped up to slightly above medium.
Seth: The final third was solid with a nice earthy profile. Bits of cocoa and coffee with some oak, hay and barnyard notes. Like before, light spice qualities. Medium in strength and body, it is fairly like that of the second third.
John: Tannic wood carries the profile into the last third. Some mild, sweet wood makes up the post draw. As the last third settles in, the profile is defined by a singular wood flavor.
Jiunn: I feel the same way about the final third as the second third. The profile continues to lack depth and is uneventful. Flavors are still mixed nuts, cedar, hay and effervescence. Strength and body finishes the same medium. 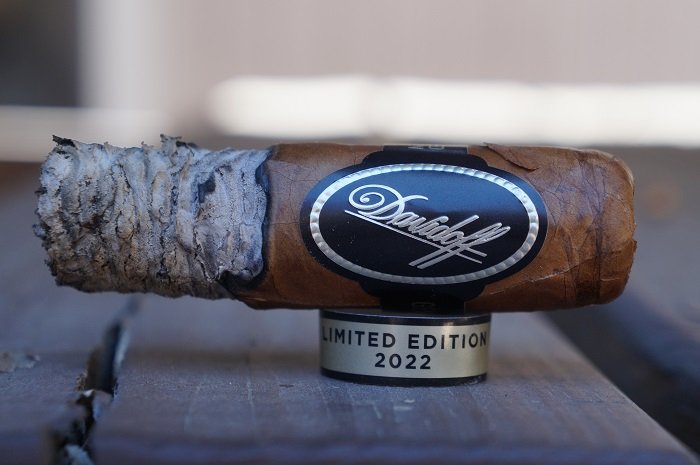 Aaron: The burn was perfectly straight throughout. The ash held on to just past the halfway point, and then again until the end.
Seth: Excellent burn throughout.
John: The burn was fairly straight through the review, becoming slightly offset into the last third. A minor touch-up was required to correct the last third.
Jiunn: Flawless burn performance. Even burn, solid smoke production, tight ashes and cool burning temperature. 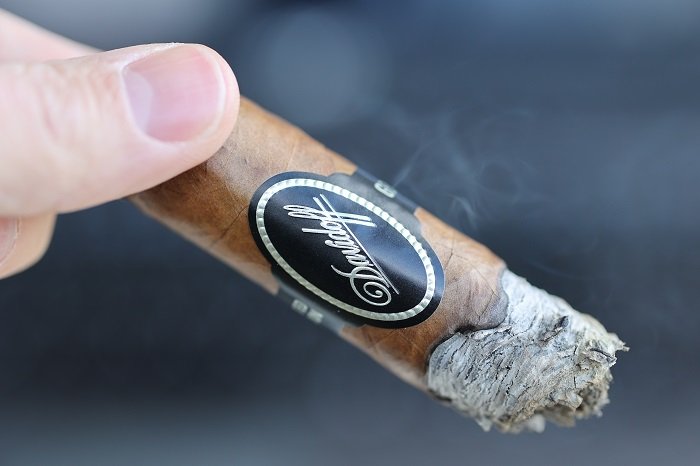 Aaron: The draw was perfect, with just the right amount of resistance that I prefer.
Seth: Great draw throughout.
John: The draw is a mild amount into the resistant spectrum, roughly 1-/12 to 2 notches.
Jiunn: The draw was also flawless, providing the ideal air flow and resistance.

Aaron: The cigar began with toasted wood and some minerality. Some mustiness joined fairly quickly and the wood became more defined as oak. Some earthiness mixed in with the minerality a bit later. The final third saw the toast level pick up and some vegetal notes and bitterness join in while the mustiness dropped out. Construction was absolutely perfect. With this Davidoff Limited Edition 2022 Gran Toro targeted as a mix of the cigars from the Discovery Pillar, I can’t say that I got the same enjoyment from it that I did from any of those individual blends, so maybe the combination didn’t work as well as planned. With the flavor experience and high price point, I don’t think this is something I’d come back to, but rather smoke the individual blends that I did enjoy instead.
Seth: Can a cigar score well and be a disappointment on a personal level? Yes, it can. While the Davidoff Limited Edition 2022 Gran Toro performed well and I thought solid flavors were delivered, I don’t think the blend did a great job of capturing the three “Black Label” brands. With that, there was nothing wowing to this cigar that justified the limited title and high price. Balanced cigar with a nice increase in strength and body. Very well constructed. Came off as a less Brazilian Davidoff Escurio.
John: The Davidoff Limited Edition 2022 Gran Toro started out with a more classic Davidoff profile you’d have expected as a flavor fingerprint from other releases. As the cigar progressed, it seemed to lose a lot of that complexity, and while pleasant, was not what I would hope for out of a super premium cigar. The draw was a mild amount into the resistant spectrum, and the burn required a minor touch-up to correct. The profile was pleasant and promising in the first third, but the price point makes it a non-starter to take a second pass. Davidoff has a myriad of other offerings that I think are superior in flavor profile. Total smoking time was 1 hour and 51 minutes.
Jiunn: The Davidoff Limited Edition 2022 Gran Toro smoking experience can be summed up as smooth, soft, lacking in depth and uneventful. While this type of profile reminds me of the original days of “smooth” Davidoff delivery, it needs to give me much more depth to keep my engagement for the entire cigar. It’s still an overall decently enjoyable cigar, but it needs to give me much much more, especially for $32.