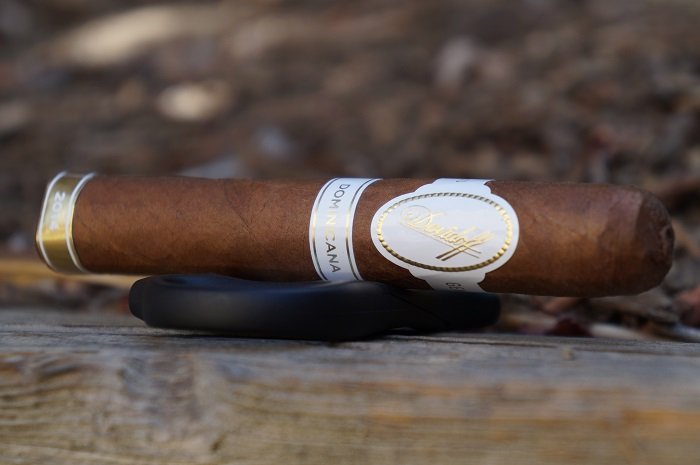 Aaron: The wrapper on the Davidoff Dominicana Robusto is light brown and has a couple of fine veins present. The seams are a bit raised and the cap is finished off with a very small pigtail. There are three bands, with the primary being the traditional white label, the secondary carries the same color combination and denotes the line while the foot band is the reverse color combination and denotes 2014. The aroma from the wrapper is musty hay while the foot brings a full dose of musty, sweet cedar. The pre-light draw brings musty, slightly dry cedar along with a mild spiciness on my lips.
Seth: An oily Colorado Maduro wrapper on this Davidoff Dominicana Robusto. Leathery in texture as well. Firm throughout. Few veins, but medium in size. Aroma of rich earth, salted wood, dark chocolate and spices. Reminds me of salted caramel brownies.
John: The Davidoff Dominicana Robusto pulls out all of the stops for the pre-light experience. The cigar is triple banded, with a gold ‘2014’ foot band, and a secondary band that indicates ‘Dominicana’ in white on gold. The cigar is in cellophane and has a UPC sticker with a tear tab. The cigar also has an additional complication of a pigtail cap. For aromas, I could smell sweet tobacco and wood from the foot. Off the wrapper, there were aromas of sweet bread and light wood. All in all, quite subdued for aromas.
Jiunn: The Davidoff Dominicana Robusto has a Colorado Claro wrapper shade. Veins are well pressed, seams tight, bunch and roll even and head well wrapped. Aromas from the wrapper tell abundant white pepper and barnyard. Aromas from the foot give that same rich white pepper spice with added roasted nuts. Cold draw provides a mixture of hay and cedar. 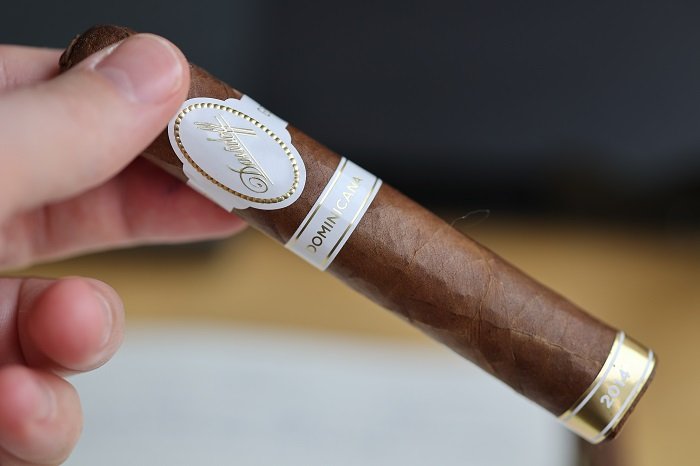 Aaron: The cigar begins with musty and spicy cedar. At a quarter inch in, the cedar exhibits a toastiness and the spice is an overall baking spice that shows moments of more cinnamon influence. The retrohale is toasted cedar and light baking spice. At an inch in, the toasted cedar is up front with light mustiness and baking spice. At an inch and a half, the mustiness picks up a bit while the baking spice is still light in the background. The strength in this third was right at medium.
Seth: The first third opens with nice damp wood notes that are paired with some leather and dry earth. There are some peanut qualities present, and the finish is that of roasted coffee beans and pepper. I would classify the cigar as medium to medium-full in strength and body.
John: Sweet bread gets things started, with creaminess and bread through the retrohale, and a long delayed post draw light-plus strength wood. Wood and sweet bread take up the retrohale, as sweetness gradually moves to the front a few more puffs in. Baking spices join the retrohale, delayed on the puff, at medium strength. As the cigar progresses, baking spices take up the middle of the retrohale, with delayed sweet wood defining the post draw. Some mild dryness joins the post draw shortly after.
Jiunn: The start of the first third is not very Davidoff-like. Instead of typically easing my palate into the cigar with classic hay and must, this cigar wastes no time. It’s spicy, layers the tongue with raw cedar and leather, but still maintains somewhat of the softness of roasted nuts. Retrohaling is even more intense, giving a fierce white pepper spice kick. The finish is very long with leather and raw cedar. Strength is medium-full, and body is medium. 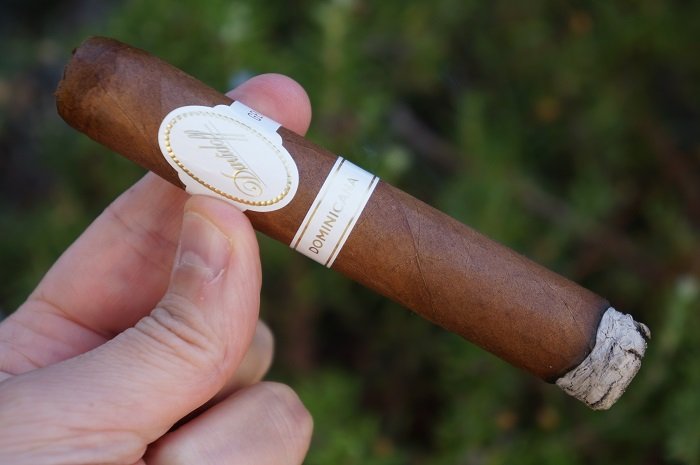 Aaron: As the second third begins, the baking spice has disappeared and the profile is now a musty and slightly dry, toasted cedar. At a half inch in, some dry earth joins the profile. The retrohale is now musty and dry toasted cedar. At an inch in, the profile is an even mix of mustiness, toasted cedar and dry earth. The strength in this third remained at medium.
Seth: The second third delivers a flavor profile that is earthy, and chocolate focused. I am getting some leather notes as well, and the finish is that of pepper and wood. Like before, between medium and medium-full in strength and body.
John: Sweet baking spices start the second, and linger well into the post draw. Dryness is still sitting in the post draw as well. Bread returns to the middle of the profile by the halfway point. A pleasant second third, but lacking the complexity of the first third.
Jiunn: The second third borderlines being sharp, offensive and showing an inkling of promise. The profile continues to show rawness in white pepper spice, leather and now char. But every once in a while, I get some nice softness in toast and nuts. The finish is especially harsh on the palate with the same rawness. Strength and body continues to be medium-full and medium, respectively. 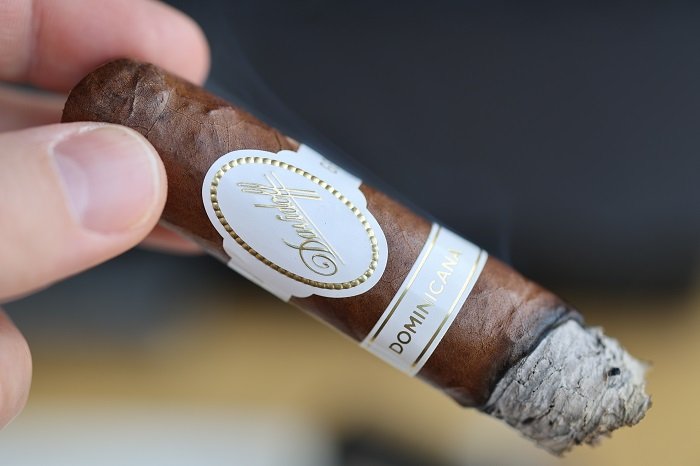 Aaron: As the final third begins, the toast level and dry earth increase. The retrohale is musty, dry toasted cedar and some dry earth. At an inch in, the dry earth continues to have a slight lead over the musty, toasted cedar. The strength in this third remained at medium.
Seth: The final third delivered a damp wood, chocolate earth and leather flavor profile. There were some pepper notes present as well, and the finish had those roasted coffee bean qualities. Like the first two thirds, the cigar smoked between medium and medium-full for strength and body.
John: The last third is wood forward, with sweetness in the middle of the draw, and dry cedar into the post draw. As the last third progresses, mild citrus joins the center of the profile and falls off quickly into the post draw. In the bottom half of the last third, mild hay joins the center of the draw.
Jiunn: The final third doesn’t let off the gas of harshness and rawness. It’s still full of leather, white pepper spice and char. Strength and body finishes the same medium-full and medium. 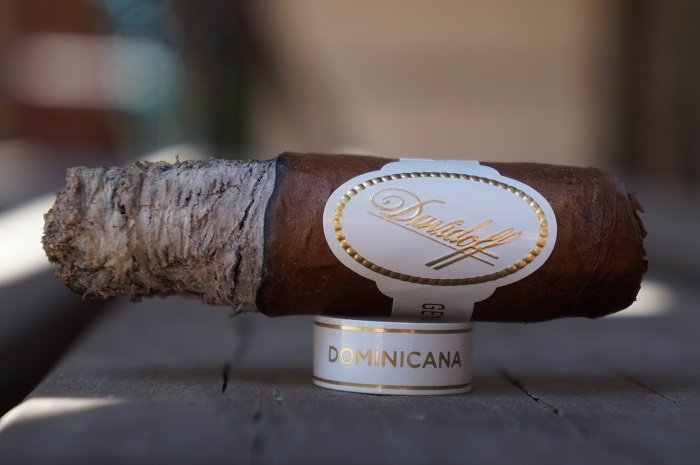 Aaron: The burn was straight the entire way. The ash held on in near two inch increments.
Seth: Burn was a little off, but that is not surprising with the wrapper qualities.
John: As is the case with almost all the Davidoff’s I smoke, the burn was very straight, with the ash dropping in my lap during the second third.
Jiunn: Perfect burn performance. Even burn, solid ashes, cool burning temperature and plenty of smoke production. 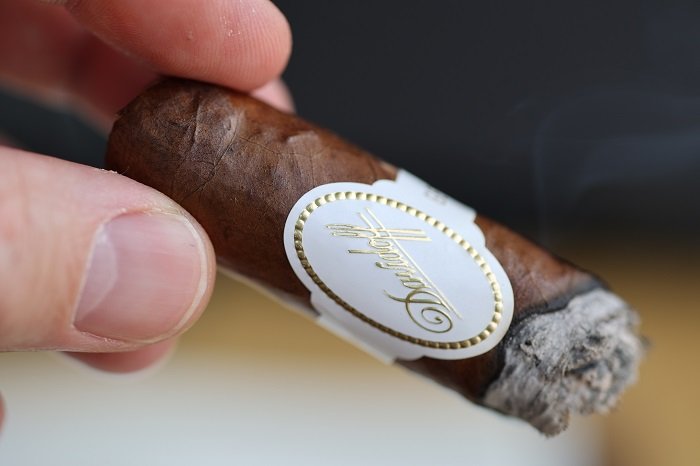 Aaron: The draw was slightly tighter than I prefer, but didn’t cause any issues with the smoking experience.
Seth: Draw was good. There were times when it seemed snug, and that is saying something from an individual like myself.
John: The draw was 1/2 to 1 notch at most towards the open spectrum, putting it right in the ideal range for a draw.
Jiunn: The draw was also perfect, giving the best possible air flow.

Aaron: The first half inch of the cigar got my hopes up as it was delivering a nice combination of musty, toasted cedar and spice. After that, the toasted cedar took the lead and the other components dropped back. Some dry earth joined a bit later and maintained this profile the remainder of the cigar. Construction was near perfect. Overall, the Davidoff Dominicana Robusto provided an average flavor profile that was pretty mundane which was disappointing with how things started. The cigar carries a hefty price point and I don’t think it exhibits any value. I don’t see myself returning to this one.
Seth: I really enjoyed the Davidoff Dominicana Robusto, and it is nice to see a cigar like this being made by Davidoff again. It is one of those Dominican focused cigars that are full in flavors and body, but not overly strong at the same time. There is balance to the cigar, and because of that, it is appealing to many smokers. I also believe this is a cigar that could be enjoyed at any time of day and be appropriate as well. It is really a great cigar for any season, and it is very different from vitola to vitola as well.
John: The Davidoff Dominicana Robusto delivered some elegant nuance in the first third, but that complexity quickly fell off in the second third. It left me with a profile that was pleasant, but lacking after such a great start. The construction was impeccable, but at this price point you’re expecting that as a baseline. Fortunately, Davidoff continues their tradition of great quality control. All in all, I would say a fairly average experience. It was nice to have the chance to review this cigar, but at this price point there’s just so many other Davidoff offerings delivering a far more dynamic flavor profile. Total smoking time was 1 hour and 40 minutes on the nose.
Jiunn: I rarely say this, but this Davidoff Dominicana Robusto was an entire miss for me. Unlike the vast majority of Davidoffs I’ve had, this cigar showed no finesse or complexities. Instead, it showed rawness and harshness. I sure hope I got the outlier within our team because you couldn’t pay me to smoke this again.