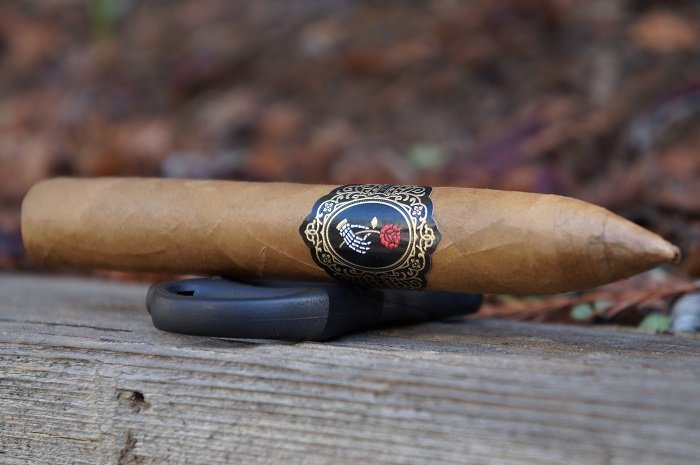 Aaron: The wrapper on the Dapper La Madrina Shade Belicoso is dark tan and has a network of lightly raised veins present. The seams are raised a bit while the tapered head is very well finished. The band is the traditional design for the line, carrying a color combination of black, gold, white and red. The aroma from the wrapper is dry hay and smokiness while the foot brings slightly young cedar with a mild spice. The pre-light draw brings a light and airy aged cedar.
Seth: The Dapper La Madrina Shade Belicoso is a beautiful Belicoso that is firm in hand. Aromas of sweet earth, sweet spices, tobacco and stone fruit. Silky wrapper with minor veins throughout. Natural in color. Smooth, silky texture. Great tapered head. Fantastic band!
John: The Dapper La Madrina Shade Belicoso comes in cellophane, with a UPC sticker that has an integrated tear point to leave it intact when the cellophane is opened. It has a single band, with small font on a black background indicating ‘La Madrina’, but it is difficult for me to make out. Inspecting the cigar, it feels consistently firm throughout the cigar. For aromas, I was picking up on sweet tobacco, faint earth, clove and some barnyard underneath. From the foot, there was sweet hay and tobacco.
Jiunn: The Dapper La Madrina Shade Belicoso has a textbook Colorado Claro, light caramel wrapper shade. Veins are well pressed, seams tight, bunch and roll even but on the firm end and Belicoso head well wrapped. Aromas from the wrapper tell cedar and hay. Aromas from the foot give naturally sweet roasted nuts. Cold draw reveals cedar and hay. 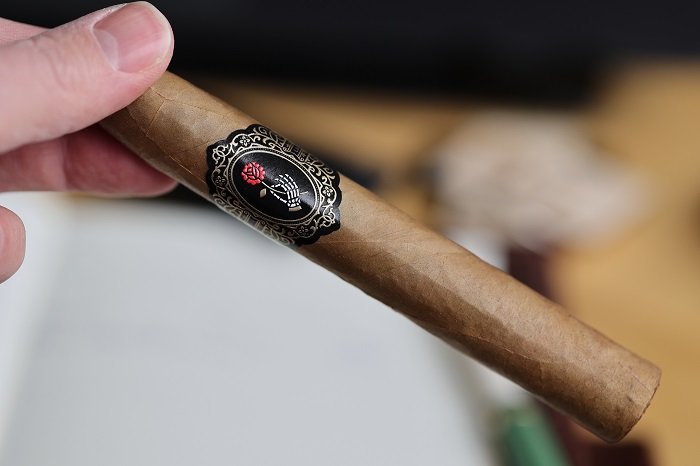 Aaron: The cigar begins with toasted cedar and mild cinnamon. At a quarter inch in, some mushroom mustiness joins the profile. At a half inch in, the cinnamon becomes very light. The retrohale is toasted cedar and mushroom mustiness. At an inch in, the light cinnamon has transitioned to more of a general baking spice. At an inch and a half in, the cedar has become very detailed. As the third comes to a close, the profile is toasted cedar and mushroom mustiness even up front with mild baking spice in the background. The strength was slightly below medium.
Seth: The first third starts out with fantastic creamy cedar notes. There are some cocoa powder qualities present as well, and the finish has this hazelnut, coffee, leather and lemon peel profile. Beautiful. Medium in strength and body.
John: My initial flavor impressions were sweet wood, crackers and a salty finish to each draw. Some red pepper flake was coming into the center of the profile, and lingered well into the post draw at medium strength. As the first third continued to evolve, some mild chocolate joined the end of the draw. By the halfway point, saltiness and chocolate combined in balance, with a lightly salty and wood finish. As the bottom half progressed, wood came through on the retrohale. Some time later, the wood on the post draw took on some light-plus dryness to the mouthfeel.
Jiunn: The most intriguing part is the body. It almost plays a trick on my mind because it has a decent amount of heft. Not quite medium-full but really close. But in terms of flavors, it’s a bit boring. It’s dominated by cedar and hay. Retrohaling helps break that up by introducing some nice black pepper spice. The finish is all about the same cedar and hay, but at least it is quite lengthy. Strength is medium. 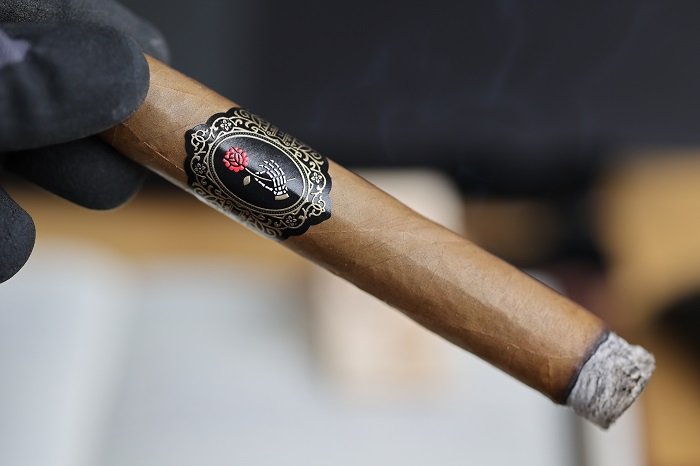 Aaron: As the second third begins, the toast level increases a bit and the cedar isn’t as detailed. At a half inch in, the baking spice picks up a bit. The retrohale has the toasted cedar up front with the mushroom mustiness a bit behind. At an inch in, the toasted cedar is now leading the mushroom mustiness. At an inch and a half in, the toast level has become pretty heavy. The strength in this third bumped up to medium.
Seth: The second third delivers a profile of cream, nuts and spices. Cedar as well. The hazelnut qualities are still present, but I am getting this almond quality too. Touches of hay and herbs on the finish. Coffee too. Medium in strength and body.
John: The second third began with more sweet crackers and wood and mild chocolate with wood to finish. As the second third settled in, dry wood moved into the center of the profile. For the rest of the second third, the flavors stayed consistent with no more evolution.
Jiunn: The second third’s flavor range broadens such that there is now stale dried nuts, bread and general low level bitterness to the profile. Strength and body remains the same as the first third. 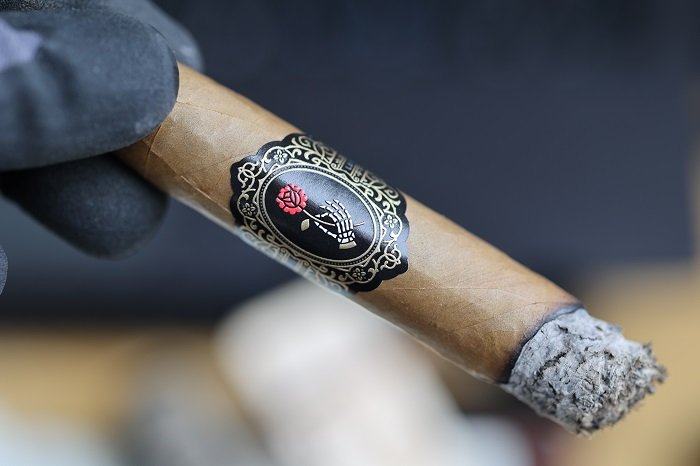 Aaron: As the final third begins, the toast is very heavy and a light bitterness joins the profile as the mushroom note has left the mustiness. At a half inch in, the baking spice is pretty mellow. The retrohale is now musty, toasted cedar with mild baking spice. As the cigar wraps up, the profile is heavily toasted and slightly bitter cedar with mustiness a bit behind and mellow baking spice in the background. The strength in this third remained at medium.
Seth: The final third finishes wonderfully. It is very balanced, and it delivers this earth, cocoa, cream, cedar, nut, coffee and hay quality. It had so many flavors I enjoyed. It was rocking. Medium in strength and body.
John: For the first few puffs, the last third was mild chocolate, mild wood and the same mild wood finishing into the post draw. Tannins join the finish as the second third settles in. Not longer after, mild chocolate moves into the center of the profile. By the bottom half, the profile became wood forward.
Jiunn: No changes to the final third. Same body and strength as the first couple of thirds with flavors of cedar, hay, stale dried nuts, bread and everything overcasted by low level bitterness. 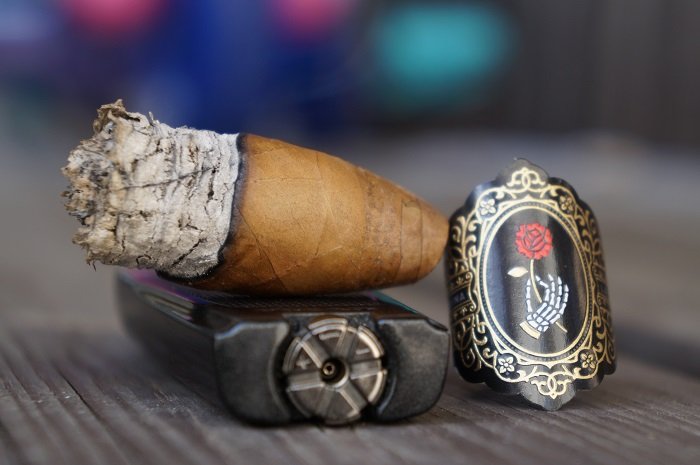 Aaron: The burn was straight throughout and the ash held on in inch and a quarter increments.
Seth: Perfect burn.
John: The burn required no intervention, with a straight burn line and a one inch ash that I would knock off to prevent it from falling in my lap.
Jiunn: If we gave an award for burn performance of the year, this cigar will hands down win it. Razor sharp burn, solid ashes, cool burning temperature and ample smoke production. 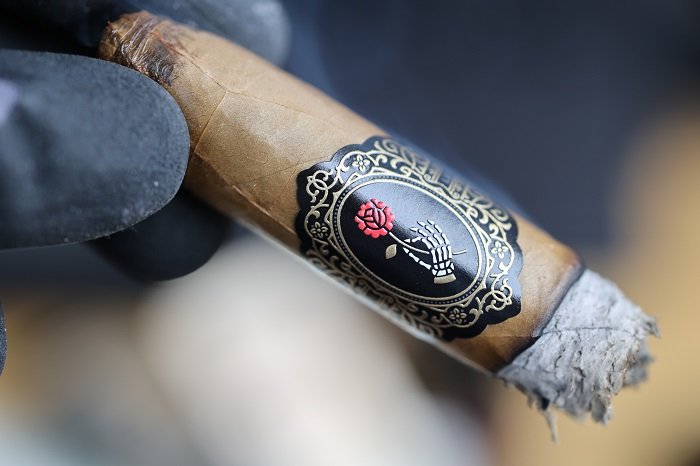 Aaron: The draw was perfect, with just the right amount of resistance that I prefer.
Seth: Perfect draw.
John: The draw had quite a bit of resistance to it. Initially, I marked it down as 4-1/2 to 5 notches into the resistant spectrum, but it seemed to open up as I smoked to 3-1/2 to 4 notches into the resistant spectrum.
Jiunn: The draw was perfect, giving the ideal air flow.

Aaron: The cigar began with toasted cedar and mild cinnamon. Some mushroom mustiness joined in fairly quickly. The cinnamon transitioned to a general baking spice and this profile held on until the final third when the toast became heavy and some light bitterness joined in. Construction was absolutely perfect. The Dapper La Madrina Shade Belicoso reminded me quite a bit of some of the Davidoff White Label offerings as it was a smooth profile with lower levels of strength that delivered a lot of body. The advantage here is a lower price point though. I’m happy to see another good Connecticut shade hitting the market and I’d like to try some of the other vitolas to see how they stack up. This is a cigar I’d easily recommend to fans of Connecticut shade and is another nice offering in the Dapper portfolio.
Seth: From the second I lit up this Dapper La Madrina Shade Belicoso, I knew it was going to do extremely well. This is my cup of tea. It was balanced from start to finish with great flavors. The construction was fantastic, and the body and strength were to my liking. This is a blend that speaks to smokers like myself. Pricing is fantastic, and so is packaging. I would buy these to smoke and age, and I would recommend them to anyone. Great cigar.
John: The Dapper La Madrina Shade Belicoso seemed to have an interesting and unique combination of flavors in the first third I cannot recall experiencing previously. The second third and last third didn’t manage to maintain the same level of complexity, but were still pleasant. I would try this cigar again, as I feel like this could be a weekly smoker for me. Burn was excellent while the draw was tighter than I would have preferred. Total smoking time was 1 hour and 47 minutes.
Jiunn: The resume of the Dapper La Madrina Shade Belicoso sounds great. NACSA produced and a wrapper (Ecuadorian Connecticut Shade) that I generally like. But the smoking experience didn’t do it for me. The low levels of staleness and bitterness really kills the entire profile. At least the A++ burn won performance of the year (not trying to sound mean, it really was quite mesmerizing to watch).