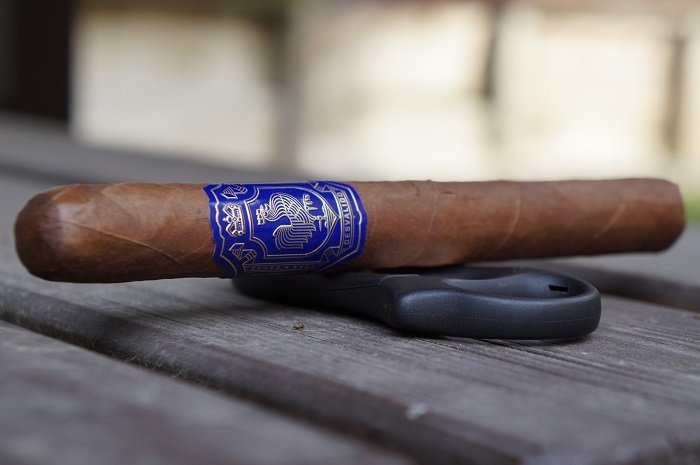 Aaron: The wrapper on the Dapper Desvalido Lonsdale is a matte medium brown that has some decently sized veins that are lightly raised and carry a slightly lighter color to them. The seams are smooth and the head is finished with a decently applied double cap. The band is bluish purple and gold and has a picture of a rooster along with the name of the line. The aroma from the wrapper is a mix of stone fruit sweetness and earth while the foot brings cedar and light stone fruit sweetness. The pre-light draw brings a light and airy cedar.
Seth: Amazing aroma immediately after removing the Dapper Desvalido Lonsdale from the cellophane! I am getting warm spice notes with some cinnamon, nutmeg, anise and red pepper. There are mint qualities, as well as some stone fruit, sweet tobacco and cedar. The colors of the band are awesome and they pop off the dark Colorado wrapper. There is this dark red clay coloring and I am picking up few veins throughout the wrapper. Those present are medium in size and there is some tooth present as well. Firm throughout, a well constructed cigar.
John: The Dapper Desvalido Lonsdale had no UPC sticker present on the cellophane. Aromas from the cigar included mild chocolate, musty barnyard and wood. From the foot, I picked up sweet tropical fruit and hay.
Jiunn: The Dapper Desvalido Lonsdale has an even Colorado Maduro wrapper shade. Veins are well pressed, seams tight but visible, bunch and roll even and head well wrapped. Aromas from the wrapper tell dry barnyard, rich cedar and hay. Aromas from the foot give white pepper and dried nuts. Cold draw gives hay and cedar. 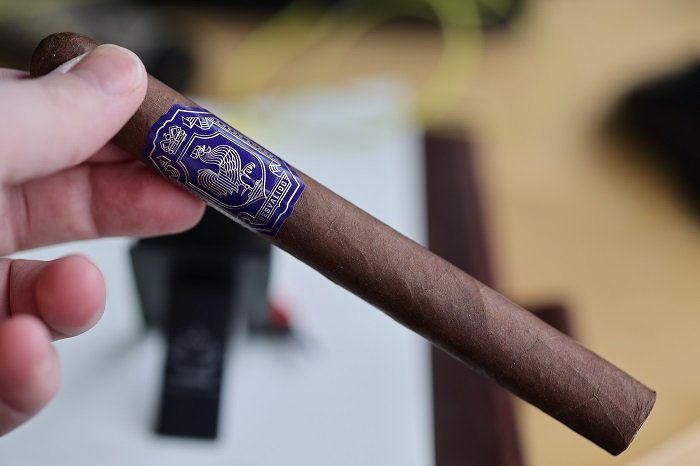 Aaron: The cigar begins with dry, musty cedar and mild cinnamon. At three quarters of an inch in, a slight creaminess joins the profile. The retrohale is just dry and musty cedar. At an inch and a half in, the cinnamon and cream are no longer present while a light dry earth joins the dry and musty cedar. The strength in this third was slightly below medium.
Seth: The first third begins by delivering this mint chocolate chip quality. There are some creamy aspects as well, but it is predominately dark chocolate and mint. With that are some soft spices, coffee, cedar and earth. The cigar is smoking at a medium level in terms of strength and body, and it is flavor first.
John: My first few puffs brought flavors of baking spices and wood. Some medium strength lingering baking spices start to establish on the post draw. Sweet citrus begins to develop on the retrohale as dry cedar comes through on the post draw. Light plus chocolate joins about an inch into the review. That chocolate becomes more defined as powdered cocoa by halfway, mixed in with hay. Mild sour citrus and mustiness with tannic cedar are present in the bottom of the first third.
Jiunn: The first third starts off with plentiful sweet cedar and nuts. A half inch in, baking spices join the profile. Retohaling gives the same sweet cedar, nuts and baking spices, but in an elevated manner. The finish is pretty clean with a short cedar finish. Strength and body is medium. 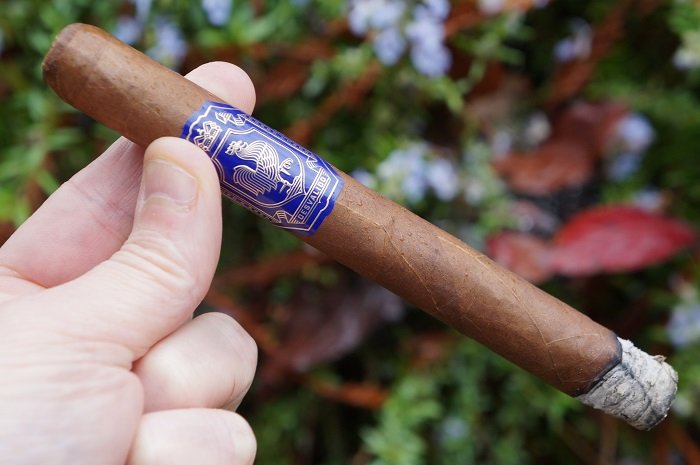 Aaron: As the second third begins, the profile maintains the mix of dry, musty cedar and dry earth and there is a mild baking spice that has joined in. The retrohale is musty cedar and light, dry earth. At an inch and a quarter, the baking spice becomes a bit sharper, but not very full. At an inch and a half, the cedar gains a toasted note. The strength in this third remained at slightly below medium.
Seth: The second third delivers a whole new level of complexity when compared with the first third and I am picking up some honey notes that are paired with the mint chocolate chip and coffee notes from before. There are some cedar notes present as well and it has this natural cedar and earth like finish. Like before, the cigar is medium in strength and body.
John: The second third opens with powdered cocoa and light plus strength cedar with a dry cedar finishing into the post draw. Mild tannins join the cedar as the second third settles in, distracting from the other flavors. By the halfway point, dry cedar has taken over the profile. Sour citrus at medium minus joins in the bottom half with dry cedar and tannic accents on the post draw. By this point, powdered cocoa is up to medium strength.
Jiunn: The second third’s flavor profile dips in complexities. It lost the sweetness in cedar and nuts. Instead, it’s mainly baking spices and cedar. The finish does lengthen though, being the same cedar note. Strength and body is unchanged at medium. 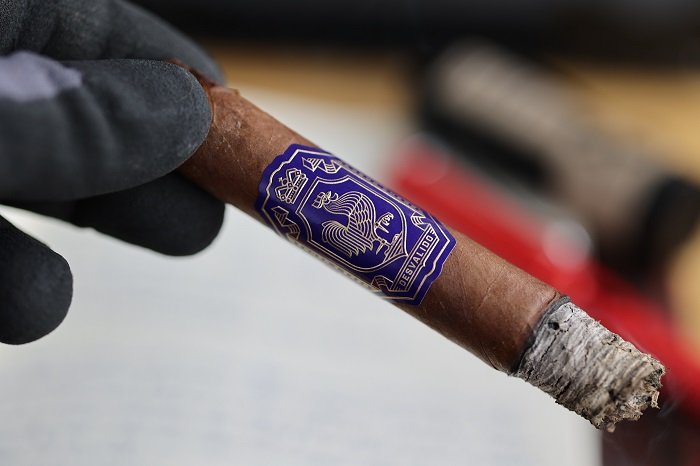 Aaron: As the final third begins, I’m getting a bitterness on my lips from the head of the cigar. At a quarter inch in, there is some overall bitterness in the profile of toaster cedar and dry earth. The baking spice is no longer detectable. The retrohale is musty and toasted cedar along with dry earth. The cigar wraps up with the dry, toasted cedar and dry earth along with mild bitterness. The strength in this third remained at slightly below medium.
Seth: What a bummer! The cigar was rocking there in the first and second third, but it has come downhill here in the final third. I am still getting some honey and mint notes, but they are pairing with mineral and earth qualities. It is still pleasant, but it is not what it once was. With that, I found the strength increasing a little bit to be slightly above medium and the body remains at the medium level.
John: Cedar, powdered cocoa and heavy post draw cedar carry the profile into the last third. Light plus earth takes up the center as the cigar settles in.
Jiunn: Nothing new to say when it comes to the final third. The profile is exactly the same as the second third, namely baking spices and cedar. Strength and body finishes the same medium. 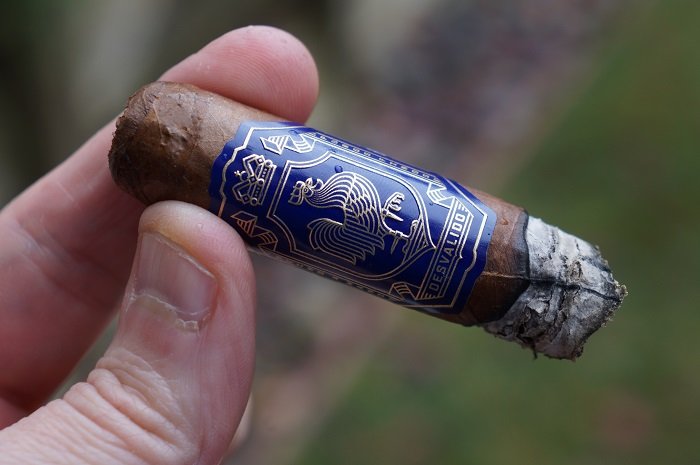 Aaron: The burn was a bit wavy throughout and required a touch-up at one point where half of the wrapper didn’t want to burn and a re-light later.
Seth: Very good burn throughout. Well constructed cigar.
John: The burn was relatively straight through the first third, with the ash dropping in my lap at the 1-1/4 inch mark. Burn also consistent through the second third, becoming offset in the last third, eventually self correcting.
Jiunn: Burn performance was almost perfect. A couple minor deductions for an uneven burn, resulting in a couple quick touch-ups. 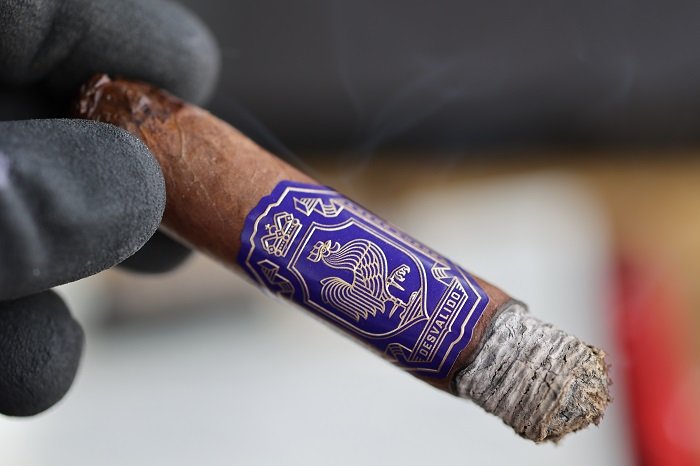 Aaron: Unfortunately, the Dapper Desvalido Lonsdale never really got off the ground for me. It started with dry and musty cedar and gained some dry earth, and those components were the core of how the cigar progressed. The profile needed something else to help round it out and create a less drying effect on my palate. Just a bit of a miss in a portfolio of cigars that I tend to enjoy. I don’t really see myself revisiting this one.
Seth: The Dapper Desvalido Lonsdale is a good cigar and I believe with a little bit more age it will be very good. The finish was disappointing, there is no doubt about that, but the first two thirds were phenomenal. The complexity, depth and transitioning present in the blend was great. I loved the strength and body that was delivered, and the construction was top notch as well. I love the diversity in the blend, and it is a great blend out of NACSA. Dapper Cigar Co. is a brand that to me continues to deliver quality blends and really enjoyable cigars. Well done!
John: The Dapper Desvalido Lonsdale started out with interesting flavor combinations in the first third that had my attention. The second and last thirds I could really only describe as disharmonious. The various flavors didn’t seem to compliment each other and were distracting my palate from enjoying the experience. I don’t think I would smoke this particular vitola again, but I would be interested in trying it in a different size to see the impact it had on the profile. The burn was great overall, and the draw was good once it opened up in the first third. Total smoking time was 1 hour and 44 minutes.
Jiunn: The Dapper Desvalido Lonsdale started off very promising with sweet cedar and nuts. But past the first third, the profile became average with mainly earthiness in cedar and baking spices. A strong start but an overall average profile.