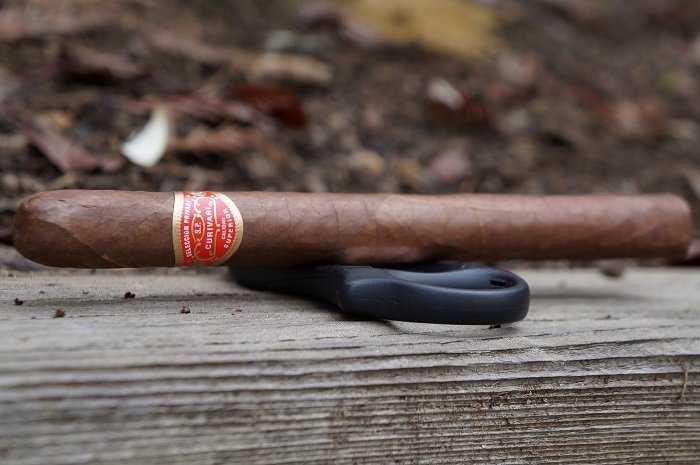 Aaron: The wrapper on the Curivari Selección Privada Lancero is a shade lighter than medium brown and has a couple of raised veins along with a network of fine veins. The seams are smooth and the caps well applied. The band is red and gold with white text which denotes the brand and line and looks very Cubanesque. The aroma from the wrapper is wood and hay while the foot brings wood and earth. The pre-light draw brings an aged cedar note.
Seth: Finished with a lovely Colorado wrapper, the Curivari Selección Privada Lancero has a nice faded brown coloring. Reddish hues as well. There are small veins present throughout, and the cigar is smooth in texture. Aromas of chocolate, sweet spices and tobacco on the foot. Leather qualities on wrapper.
John: The Curivari Selección Privada Lancero comes in cellophane and has a UPC sticker with an integrated tear space to leave the UPC intact when opened. The cigar has a single band, with gold lettering and accents on a red background. Inspecting the cigar, the cap looks a bit untidy in the application. Aromas from the wrapper included fresh cut wood and mild hay. There was more in the foot with fermented and sweet tobacco notes, along with mild hay.
Jiunn: The Curivari Selección Privada Lancero has a slick natural leather shoe brown Colorado wrapper shade. Veins are well pressed, seams tight, bunch and roll even and head well wrapped. Interestingly enough, when I first looked at the cigar, I mistook it for a Cuban Partagas. Aromas from the wrapper tell bread and cedar. Aromas from the foot give roasted peanuts and cedar. Cold draw give cedar, nuts and hay. 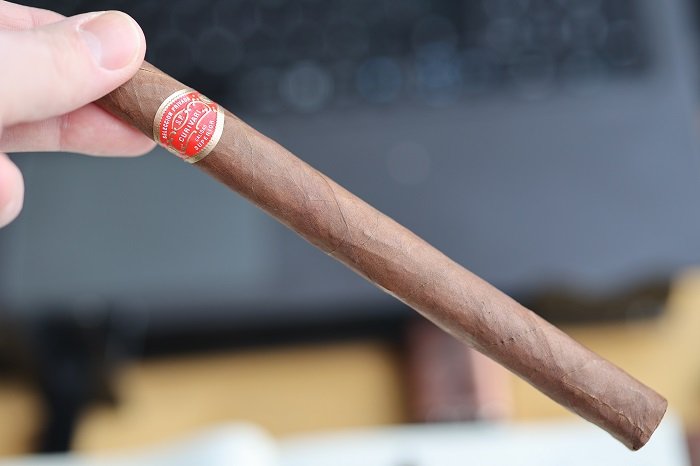 Aaron: The cigar begins with toasted cedar and light mustiness. At a quarter inch in, the cedar gains a slight dampness. At three quarters of an inch in, a mild black pepper joins and has a long finish. The retrohale is toasted cedar and light mustiness. At an inch and a half, some dry earth joins the profile. At an inch and three quarters, the pepper is very mild and its long finish is gone. As the third comes to a close, the profile is lightly musty, toasted cedar with dry earth a bit behind and mild black pepper in the background. The strength was slightly below medium.
Seth: The first third has a nice introduction. Dry earth and leather notes up front. There are some nutty qualities present as well, and they are paired with this spicy tobacco finish. Medium in strength and body.
John: Mild baking spices start things off, along with some wood. Chocolate and medium strength coffee define the retrohale as a light-plus intensity earth finishes the draw. The baking spices move up to medium-full after just a few puffs, as pepper develops on the post draw at medium to medium-plus intensity. Some graham cracker starts to come through the retrohale by the 20 minute mark.
Jiunn: The first third is finesse. Bread, cedar, citrus twang and baking spices. Retrohaling draws out more baking spices and gives a unique anise. The finish is short and clean, with a soft cedar and dried nuts combination. Strength and body is medium. 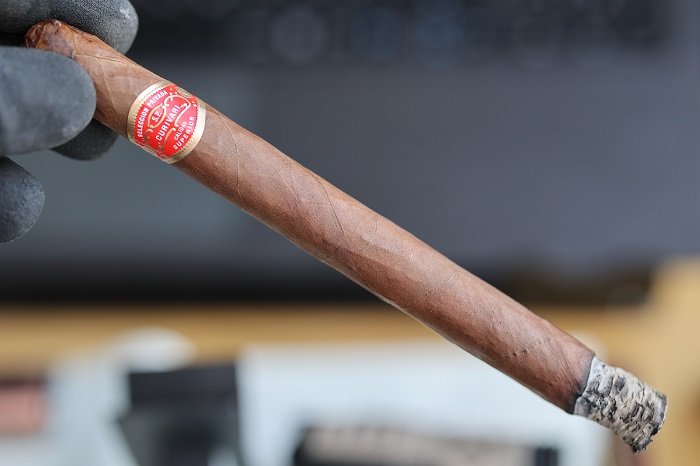 Aaron: As the second third begins, the black pepper has faded out. At a quarter inch in, the toast level becomes a bit heavier. At a half inch in, some black pepper rejoins the profile. At an inch in, the black pepper picks up to become even with the dry earth. The retrohale is now musty, toasted cedar along with some dry earth. At an inch and a quarter, some light floral and vegetal notes pop in from time to time. As the third comes to a close, the musty, toasted cedar is up front with dry earth and black pepper a bit behind and light floral and vegetal notes in the background. The strength bumped up to medium.
Seth: The second third delivers a flavor profile that is creamier with some earth and nut qualities. The spice notes have faded some, and it has a finish of coffee and leather. Like before, medium in strength and body.
John: Chocolate, graham cracker and medium intensity baking spices lead the retrohale into the second third. Wood makes up the post draw, and after some time also moves into the middle of the profile. Approaching the halfway mark, the post draw wood takes on some dryness, and in the bottom half some tannins.
Jiunn: The second third becomes too herbal with the same anise note. Also, the baking spices pick up a bitter taste. These amendments tone down the softer notes of bread and citrus twang quite a bit. Strength and body remains medium. 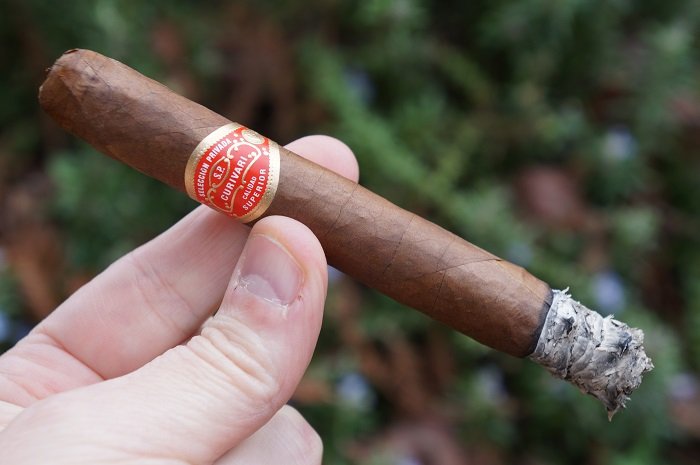 Aaron: As the final third begins, the floral/vegetal notes take on a slight chalkiness and the black pepper once again becomes very mild. At three quarters of an inch in, the dry earth is now even with the musty. Toasted cedar while the black pepper has departed. The retrohale is musty, toasted cedar, dry earth and mild black pepper. The cigar wraps up with the even mix of musty, toasted cedar and dry earth up front with chalky floral and vegetal notes in the background. The strength remained at medium.
Seth: The final third delivers that creamy and nutty profile. I am picking up some tobacco and earth notes with that, and the finish is that of pepper spice. Medium in strength and body.
John: The last third kicks things off with baking spices and wood. Some mild chocolate takes home in the retrohale, but it’s run over by the wood. As the last third progresses, some bitterness is present through the finish.
Jiunn: Nothing new to note for the final third. There is still strong anise and bitter baking spices with less noticeable bread and citrus twang. Strength and body finishes the same medium. 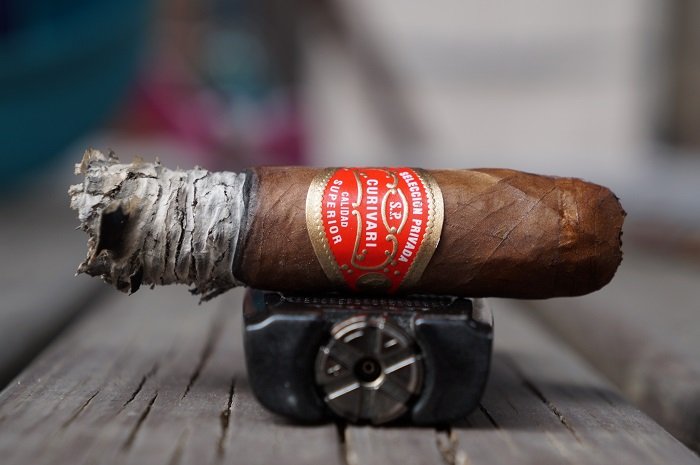 Aaron: The burn was slightly wavy at times and the cigar went out once, requiring a re-light. The ash held on in inch and a quarter increments.
Seth: Great burn from start to finish.
John: The burn was a disaster. A canoe formed by the halfway point of the first third, requiring a touch-up. The cigar went out in the bottom half, requiring a re-light. Through the second third, it went out three times, requiring re-lights. It went out four more times in the last third, and I re-lit it three times. By the fourth time, the cigar was close enough to the end that I didn’t bother. In total, it went out seven times, and had six re-lights, with one touch-up. I have to assume that impacted the flavor performance.
Jiunn: Aside from a couple quick touch-ups to get the burn back on track, no issues with burn performance. 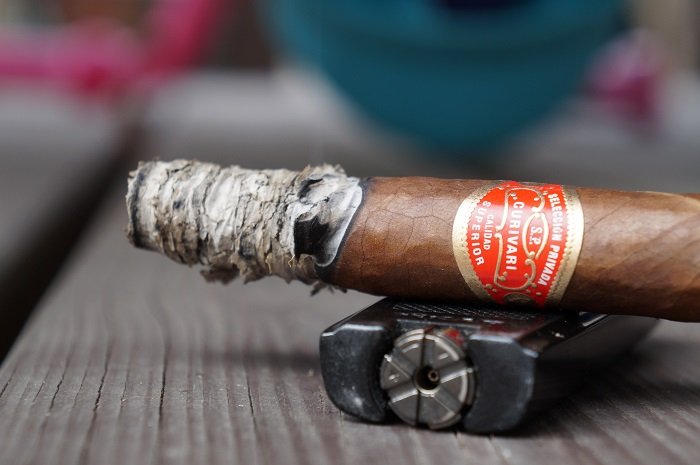 Aaron: The cigar began with toasted cedar and light mustiness. Some black pepper and dry earth joined a bit later. The second third saw the pepper drop out for a bit and some light floral and vegetal notes join in. The final third saw the floral/vegetal notes gain some chalkiness while the black pepper dropped out again. The Curivari Selección Privada Lancero started a bit average and then increased in enjoyment in the second third as the detail level of the cedar was quite impressive. The final third dropped back down to average as the detail lessened and some chalkiness joined in. While I wasn’t blown away by the cigar, it provide some good moments. The price point is quite nice, especially for a Lancero. I may come back to this from time to time, but it wouldn’t be a regular occurrence.
Seth: This was an enjoyable cigar, and while not overly complex, it did have a bit of transitioning throughout. The flavors really came and went throughout the whole cigar, and that was enjoyable. In some ways, the simplest aspects of the Curivari Selección Privada Lancero made it so enjoyable. The sweet cream qualities on the finish really made me want to light up another one as well. With the cigar being just a little bit larger than your standard lancero, it seemed less fragile and more of a lancero you could smoke throughout the day while handling other items.
John: The Curivari Selección Privada Lancero had some promising flavor delivery in the first third. By the second third, I have to assume impacted by the excessive number of re-lights, the profile wasn’t able to keep up the same level of complexity, and that carried through the remainder of the review. The draw was towards the resistant spectrum and the burn was the lowest rating we can give, with the cigar going out seven times. Operating under the assumption this was a significant outlier, I’d be willing to try the cigar again, in hopes that the flavor profile from the first third could carry through without being impacted by burn issues. Total smoking time was 1 hour and 39 minutes.
Jiunn: Great start for the Curivari Selección Privada Lancero, but a weak race to the finish line. The first third made me think, this amount of balanced flavors for $7.50? Yes please. The latter two thirds were such a let down though. The profile went from balanced and nuanced to harsh and passable. Then again, smoking a third for $7.50 might not be too bad? Trying hard to convince myself.