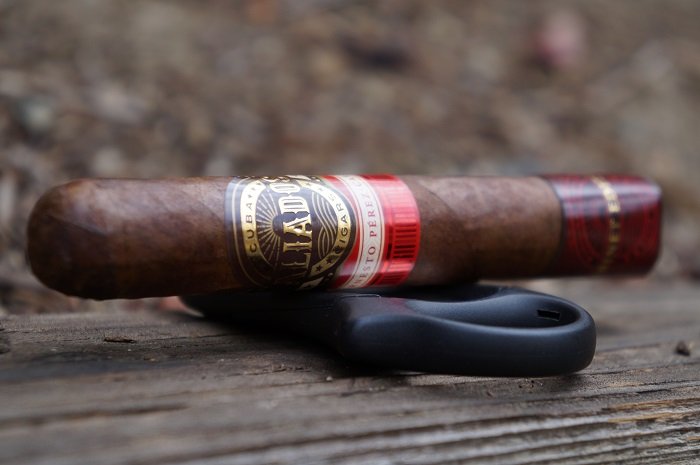 Aaron: The wrapper on the Cuba Aliados by Ernesto Perez-Carrillo Robusto is medium brown and has a decently raised vein running down one side. The seams are a bit raised and the caps are decently applied. There are two bands, with the primary having a brown and gold color combination in the upper portion with the brand logo and then a red and white color combination on the lower half designating the blender and manufacturer. The foot band is red and gold and denotes Cabinet Edition. The aroma from the wrapper is a mix of hay and earth while the foot brings faint cedar. The pre-light draw brings a light cedar along with a mid-level spiciness on my lips.
Seth: Aromas of chocolate, cake, tobacco and earth on the foot and wrapper. Aroma is best quality of the Cuba Aliados by Ernesto Perez-Carrillo Robusto thus far. Bands too. Wrapper is fairly rough and dry. Wrapper has a marbled coloring, showing some Natural, Colorado and dark Colorado qualities. Lots of veins.
John: The Cuba Aliados by Ernesto Perez-Carrillo Robusto comes in cellophane and has a UPC sticker that tears in half when the cellophane is opened. The cigar has a slightly larger primary band indicating ‘Aliados by Ernesto Pérez-Carrillo’ with an equal sized secondary foot band indicating ‘Cabinet Edition’. Aromas from the wrapper included hay and sweet wood. From the foot, I could detect hay and sweet tobacco.
Jiunn: The Cuba Aliados by Ernesto Perez-Carrillo Robusto has an uneven “dirty” looking Colorado wrapper shade. Veins are well pressed, seams tight, bunch and roll slightly lumpy and head is well wrapped and capped. Aromas from the wrapper tell cedar, chestnuts and stinky barnyard. Aromas from the foot give white pepper spice, nuts and cedar. Cold draw reveals white pepper spice and mixed nuts. 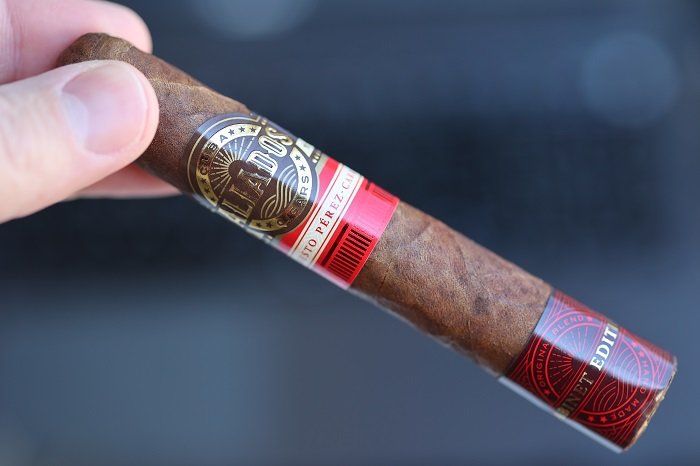 Aaron: The cigar begins with toasted cedar, earth and mild black pepper. At a half inch in, the overall profile is slightly dry. The retrohale is toasted cedar, earth and zingy black pepper. At an inch in, the toasted cedar and earth are now even up front. As the third comes to a close, the toasted cedar and earth are even up front with black pepper a bit behind and the overall profile is still a bit dry. The strength was right at medium.
Seth: The first third starts out with a strong black pepper quality and it is paired with some dry earth. Bits of wood present as well. Medium-full in strength and body.
John: The first third opens with sweet tobacco, wood and hay. There are medium-full spices through the retrohale. As the first third settles, a light-plus bread joins the retrohale to compliment the spices. By the 20 minute mark, chocolate also joins the retrohale.
Jiunn: The first third shows good balance of roasted chestnuts, cedar and natural sweetness driven off mixed, roasted nuts. Retrohaling gives a nice pop of cedar wood and dried red pepper spice. The finish is short, with a soft dried red pepper spice that leaves the palate too soon. Strength and body is medium. 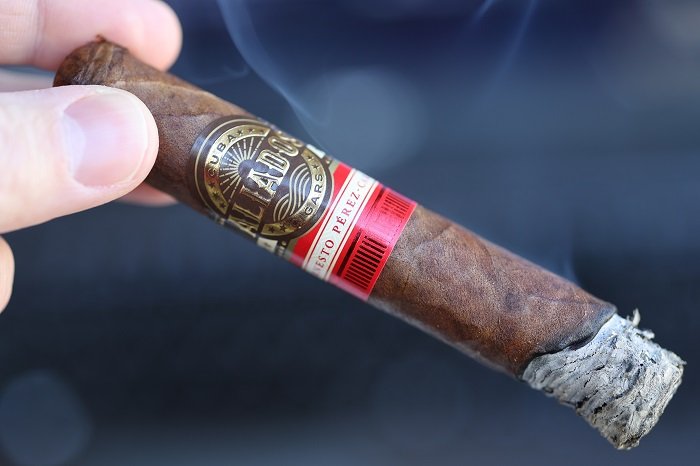 Aaron: As the second third begins, the toast level increases. The retrohale is a mirror image of the mouth draws with an even mix of toasted cedar and earth up front with black pepper a bit behind. As the third comes to a close, the profile is a dry mix of toasted cedar and earth up front with light black pepper in the background. The strength dropped down to slightly below medium.
Seth: The second third is in line with the first. Lots of pepper, wood and dry earth. Lacking some complexity, with an average core. Medium-full in strength and body.
John: The second third gets going with wood, sweet baking spices and a light-plus wood lingering into the post draw. There is no further evolution until the halfway point where earth comes through at the end of the draw.
Jiunn: The second third has one key transition. The profile begins to show minerals. Also, the natural sweetness off roasted mixed nuts is decreased. Strength and body is unchanged at medium. 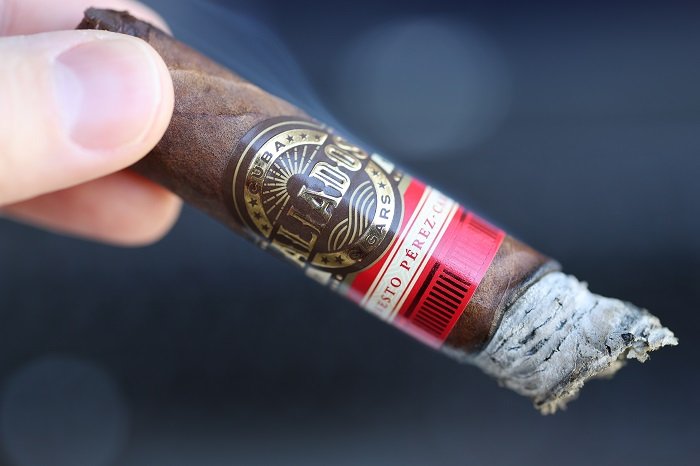 Aaron: As the final third begins, a light bitterness becomes present. The retrohale remains an even mix of toasted cedar and earth up front with black pepper a bit behind. As the cigar wraps up, the profile is toasted cedar and earth even up front with black pepper and bitterness in the background. The strength bumped back up to medium.
Seth: Lots of minerals with the earth, dry wood and pepper notes. Medium-full in strength and body.
John: The last third opens wood forward with trailing spices into the post draw. As the last third continues, wood begins to linger into the post draw, joining the spices. Once the last third has settled in, the profile becomes wood driven for the remainder of the review.
Jiunn: No changes from the second third to the final third. The profile is still largely minerals and dried red pepper spice. The nutty sweetness from the first third is still missing. Strength and body finishes the same medium. 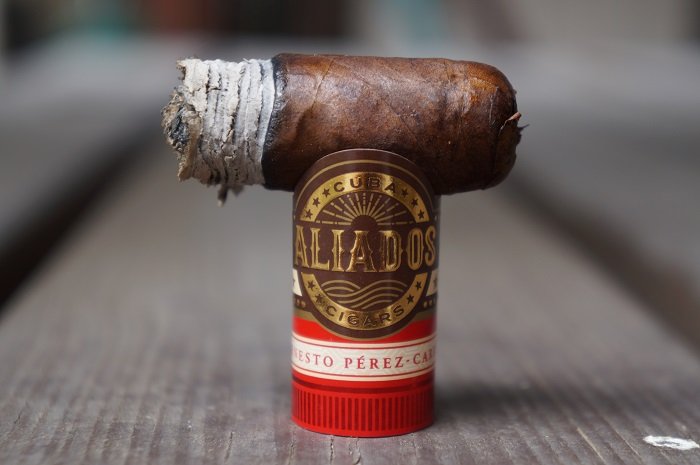 Aaron: The burn line was straight the entire way and the ash held on in inch and a quarter increments.
Seth: Burn was wavy at times. Not pretty burn.
John: The burn was fairly straight throughout. There was a moment in the second third when the burn seemed to stall, but it managed to not go out.
Jiunn: Burn performance was overall very good. The only negative being a couple quick touch-ups to get the wrapper burn back on track. 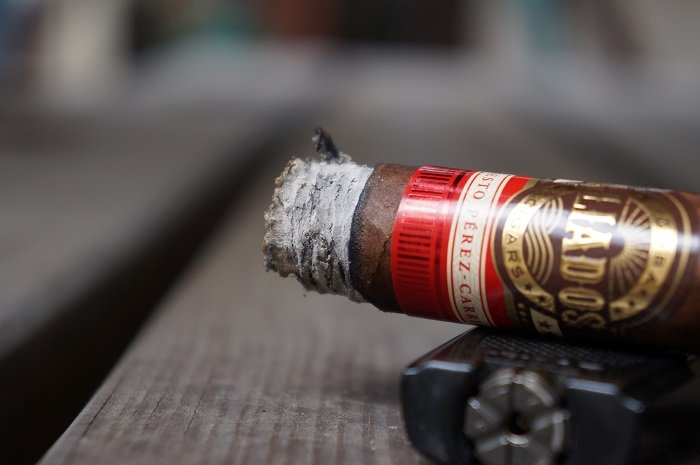 Aaron: The draw was perfect, with just the right amount of resistance that I prefer.
Seth: Decent draw throughout.
John: The draw was at most a 1/2 notch into the resistant spectrum which puts it in the ideal zone for a perfect draw.
Jiunn: Draw performance was also very good. The draw showed a bit too much air flow and not enough resistance. The smoke never over-heated, but a watchful draw was needed.

Aaron: The cigar began with toasted cedar, earth and mild black pepper and maintained this profile until the final third when a light bitterness joined in. Construction was absolutely perfect. The Cuba Aliados by Ernesto Perez-Carrillo Robusto had a very linear and mundane flavor profile. This is the smoking experience I would expect from the Original Blend that is priced at nearly half of what this cigar is, so this was fairly disappointing. I’m interested in our upcoming review of the Original Blend to see how it compares as the bar is now set low. I don’t see myself coming back to this cigar.
Seth: I go on and on about how Ernie does a great job with Ecuadorian Sumatra, and then he makes this. I am in the camp of there are darker Sumatras and lighter Sumatras. I tend to prefer the lighter Sumatras. This Cuba Aliados by Ernesto Perez-Carrillo Robusto is a darker Sumatra offering that is too harsh. I find this happens. There is too much pepper and dry wood rather than sweet spices and soft cedar. Too much pepper and minerals on the finish. Not enough balance and the blend suffered.
John: The Cuba Aliados by Ernesto Perez-Carrillo Robusto started out promising in the first third with a good combination of flavors that were engaging. By the second third, the profile was linear and by the last third, almost entirely wood forward. The burn was perfect, as was the draw. There wasn’t much here that would entice me to return to this cigar again, especially when you factor in the price point. EPC has a long list of other more affordable cigars that I believe have a more interesting flavor delivery. Total smoking time was 1 hour and 35 minutes.
Jiunn: Like pretty much the vast majority of the review cigars, the Cuba Aliados by Ernesto Perez-Carrillo Robusto had a promising first third start, led by an average remaining smoking experience. If the cigar kept the naturally sweet nuttiness and incorporated the mineral notes, it would have been an overall good cigar. Glad to have tried it, but I won’t be back anytime soon for more.