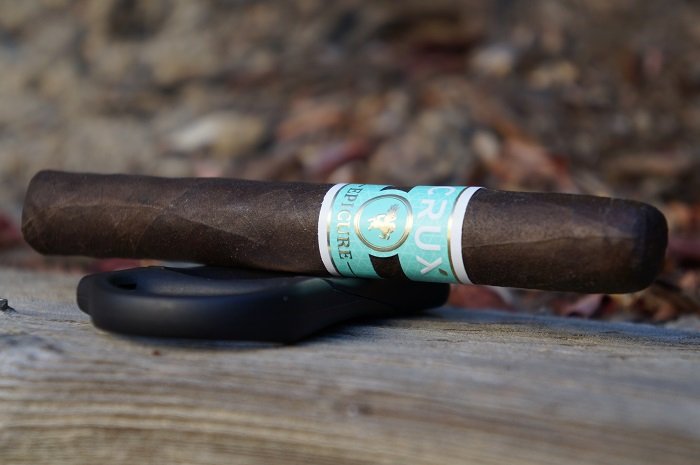 Aaron: The wrapper on the Crux Epicure Maduro Corona Gorda is very dark brown and carries a network of lightly raised veins and fine tooth. The seams are hard to detect and the head is finished off with a very well applied set of caps. The cigar is very firm. The band is the newer design for the company and this line carries an aqua, white and gold color combination and denotes the company and line. The aroma from the wrapper is a mix of dark chocolate and stewed fruit while the foot brings wood and stone fruit sweetness. The pre-light draw brings cedar along with a faint dark chocolate note. There is also a decent amount of spiciness present on my lips.
John: The Crux Epicure Maduro Corona Gorda is cellophaned and has a UPC sticker on the backside of the cellophane so it doesn’t rip when the cellophane is opened. The wrapper is immediately identifiable as San Andres with the significant amount of tooth. Aromas for the cigar included sweet cedar and bread. From the foot, I could pick out sweet tobacco. 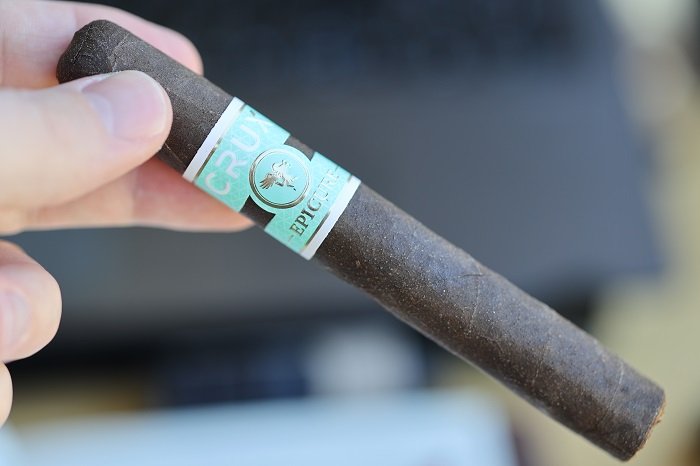 Aaron: The cigar begins with dark wood, black pepper and a light bakers chocolate. At a half inch in, a light mustiness joins the profile. The retrohale is black pepper forward with some wood coming through on the back end. As the third comes to a close, the dark wood and black pepper are even up front, with mustiness a bit behind and light bakers chocolate in the background. The strength in this third was medium-full.
John: Creamy sweetness on my first few puffs with a syrupy sweetness to finish. Medium strength baking spices and wood on the retrohale. There is a delayed post draw mild dry wood. Some mild earth and leather come in as it progresses. Earth settles on the post draw not long after. Light-plus strength post draw pepper builds as the cigar continues. By the 20 minute mark, chocolate adds to the retrohale. 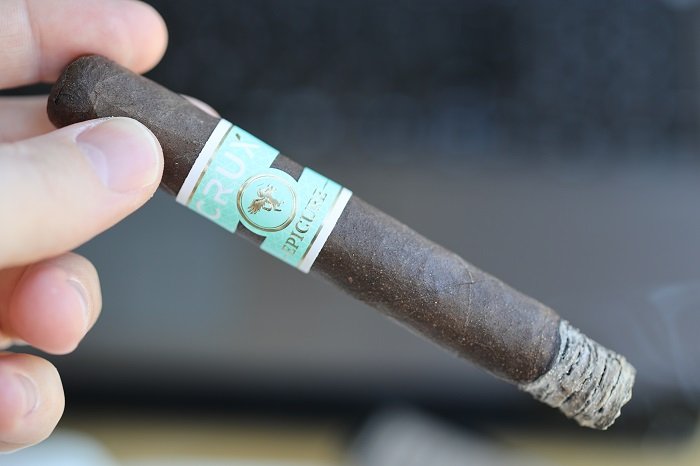 Aaron: As the second third begins, the black pepper lightens up a bit and the bakers chocolate is replaced by a light earthiness. At a half inch in, the profile is a bit dry as the earthiness has increased and is now even with the wood while the pepper and mustiness are in the background. The retrohale is dark wood, black pepper and light mustiness. The third wraps up with dark wood and dry earth up front and the black pepper and mustiness in the background. The strength in this third remained at medium-full.
John: The second third is cocoa and leather, with lingering sweetness on the post draw. The second third doesn’t need anything more than that, and keeps me engaged. 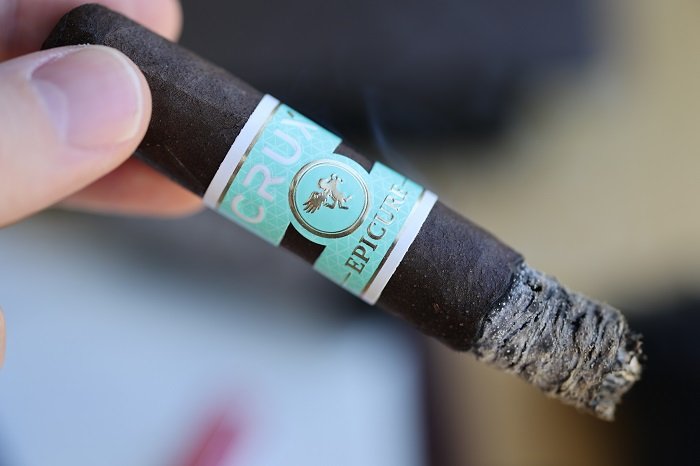 Aaron: As the final third begins, the dark wood gains some char. The retrohale maintains the dark wood, black pepper and light mustiness. The cigar finishes up with the charred dark wood and dry earth up front with black pepper and mustiness in the background. The strength remained at medium-full.
John: The last third, like the second third, does not have an overwhelming amount of flavors. Light leather, mild sweetness and cocoa are the components making up the last third. 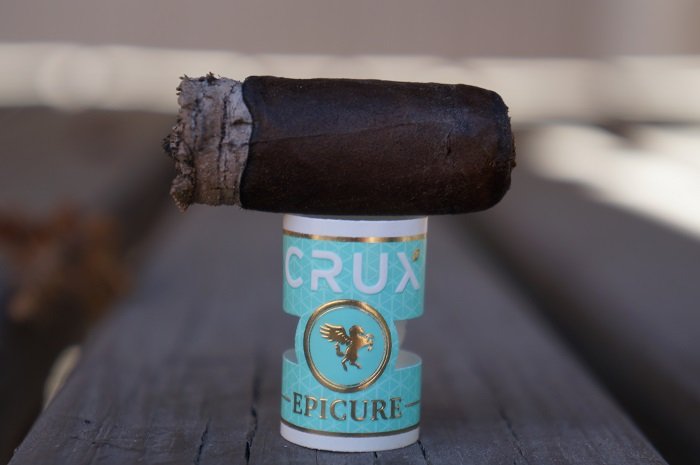 Aaron: The burn was a bit wavy at times and the cigar went out three times in the first half, requiring re-lights.
John: The burn is straight through the review, with an ash that holds on in 1-1/2 inch segments. 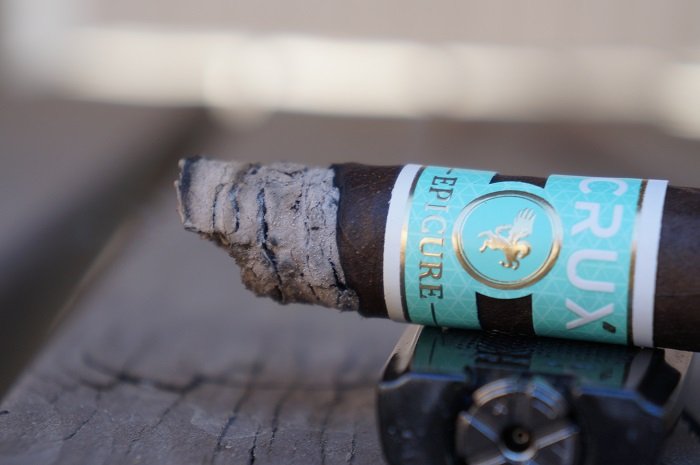 Aaron: The draw was a bit tighter than I prefer, but didn’t seem to cause any issues with the smoking experience.
John: The draw is good, with some resistance to each puff, roughly 2-1/2 to 3 notches into the resistant spectrum.

Aaron: The cigar had a nice start, with full flavors and a strength to match. The profile dropped down a level in the second third as the bakers chocolate left and maintained that level through the remainder of the smoking experience. The burn issues weren’t what I’ve normally experienced from Crux or a Tabacalera AJ Fernandez constructed cigar, so I’m hoping this is a one off. While I’m not the biggest fan of the Epicure Maduro line, I know that there is a big audience for this cigar that does enjoy it and if the construction issues aren’t typical for this vitola, then I would suggest that fans of the line seek out the Crux Epicure Maduro Corona Gorda.
John: The Crux Epicure Maduro Corona Gorda was a good offering of the Epicure Maduro blend in a vitola that seems to shine. The first third was the most complex, and the second third delivered enough flavor balance to maintain interest. The complexity fell off in the last third but was still pleasant. Burn was perfect, and the draw had some resistance to it. I would happily smoke another Crux Epicure Maduro in the Corona Gorda vitola, but I’m always interested in seeing how the other vitolas stack up. Total smoking time was 1 hour and 28 minutes.