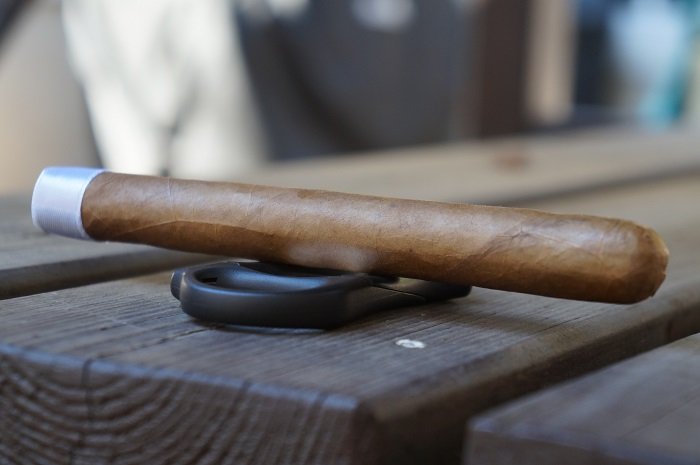 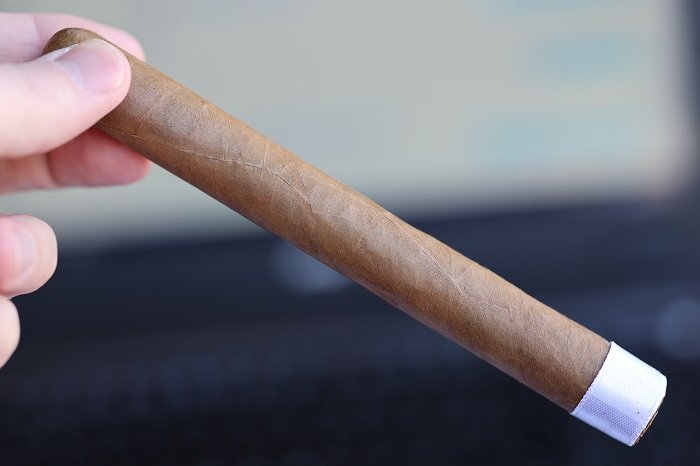 Aaron: The cigar begins with stale, toasted cedar with a bright black pepper a bit behind. At a half inch in, the toasted cedar loses most of the staleness, the black pepper drops the brightness and a light earth has joined the profile. The retrohale is toasted cedar, earth and lightly zingy black pepper. At an inch and a half in, a light creaminess joins in. As the third comes to a close, the profile is toasted cedar up front with earth and black pepper a bit behind and creaminess in the background. The strength was slightly below medium.
Seth: The first third has a nice salty wood quality. There are bits of leather and peppery spices present as well. Tobacco notes on the finish. Medium in strength and body.
John: The first third beings with toasted marshmallow, and sweet wood that carries into the post draw. A creamy wood and marshmallow combine through the retrohale, with a delayed medium baking spices through the post draw. Some mild nuttiness is present in the center of the profile as it settles in. Light-plus strength chocolate comes into the retrohale just under the 30 minute mark. Aged wood with mild tannic accents also joins the retrohale as it continues.
Jiunn: The first third shows great balance and nuances. Mouth draw flavors consist of hay, game meatiness and subtle dried red pepper spice. Retrohaling beefs up both the dried red pepper spice and grassiness. The finish is all about softness in roasted mixed nuts. Strength and body is medium. 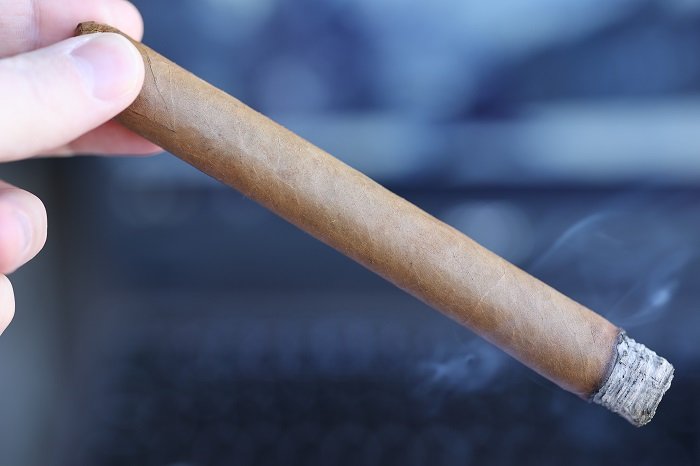 Aaron: As the second third begins, a wood bitterness becomes present. At an inch in, the wood bitterness is now very light. The retrohale is toasted cedar, earth and mild black pepper. At an inch and a half in, the wood bitterness has departed. As the third comes to a close, the profile is toasted cedar up front with earth and black pepper a bit behind and creaminess in the background. The strength remains at slightly below medium.
Seth: The second third is in line with the first. Bits of tobacco and salted wood. Leather and pepper as well. Still medium in strength and body.
John: Creamy wood kicks it off here with a mildly musty center to the draw. Tannic wood finishes into the post draw. As the second third settles in, creamy nuttiness defines the middle of the profile. Chocolate returns to the retrohale as it settles in, at light-plus strength.
Jiunn: The second third is similar to the first third. Still showing good balance and composure, the only material change is the dried red pepper spice showing up more through mouth draws. There’s also a nice intermittent stank barnyard. Strength and body remains medium. 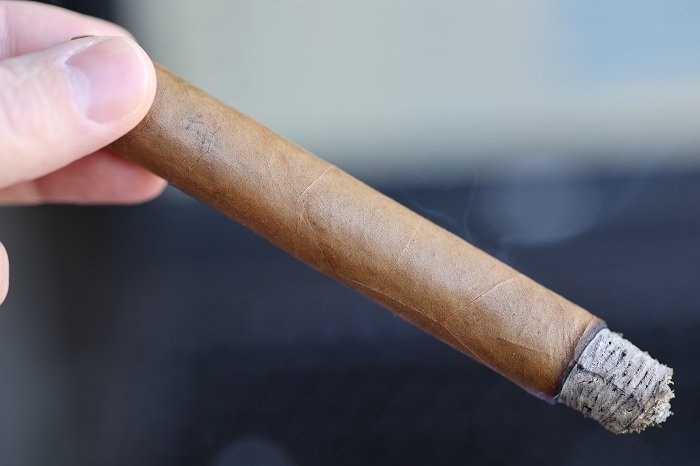 Aaron: As the final third begins, the wood bitterness returns. At a half inch in, the creaminess has departed. The retrohale remains toasted cedar, earth and mild black pepper. At an inch in, the earth increases a bit and has a long finish. At an inch and a half in, the black pepper is very mild. As the cigar wraps up, the profile is toasted cedar up front with earth right behind and light amounts of black pepper and wood bitterness in the background. The strength bumped up to medium.
Seth: The final third delivers a profile of dry earth, tobacco and salted wood notes. Slightly harsher than the first two thirds, but nothing major. Medium to meidum-full in strength and body.
John: Creamy wood leads off again, as tannic wood makes up the post draw. Light-plus tannic wood defines the center of the profile as it progresses. Once the cigar settles into the last third, the profile becomes defined by wood for the remainder of the review.
Jiunn: The final third’s subtleties and complexities lessen. What I’m primarily left with is dried red pepper spice and cedar. Strength and body finishes the same medium. 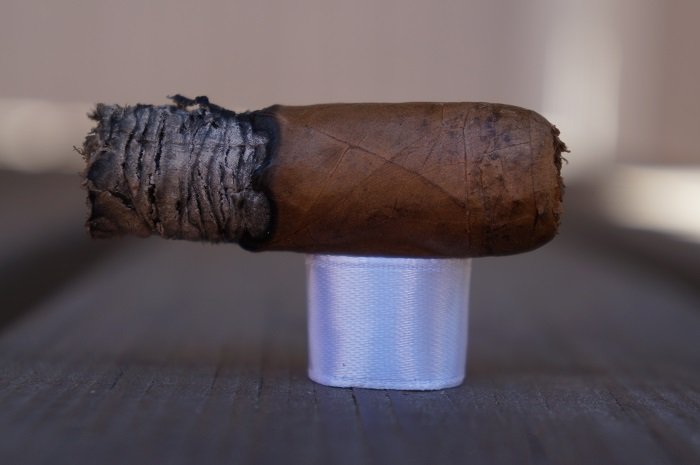 Aaron: The burn was straight throughout, but the cigar did go out once in the first third, requiring a re-light. The ash held on in inch and a half increments.
Seth: Slightly wavy at times, but not bad.
John: The burn was straight through the first third with the ash falling as it hits the one inch point. The burn is uneven in the second third, eventually requiring a touch-up to intervene. No issues through the last third.
Jiunn: Perfect burn. Even, solid ashes, cool burning temperature and ample smoke production. 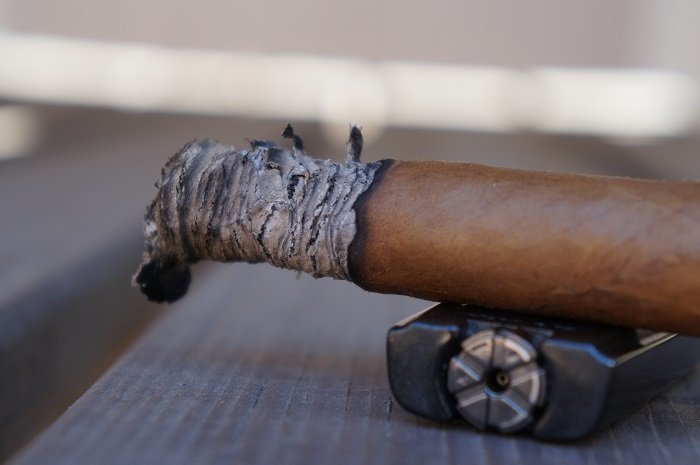 Aaron: The cigar began with stale, toasted cedar with a bright black pepper a bit behind. The staleness left fairly quickly and some earth joined in. Some creaminess joined a bit later. The second third saw some wood bitterness join in for the first half of the third. The final third saw the wood bitterness return and the creaminess drop out. The construction was perfect aside from a single re-light. The Crowned Heads Sfumato in C Major had an average flavor profile throughout that was focused around toasted cedar, earth and black pepper. The wood bitterness wasn’t ideal, but didn’t really detract from the overall profile. The cigar just wasn’t all that exciting and doesn’t really draw me in to wanting to revisit it all that soon.
Seth: I liked the wrapper and size, but I don’t think the two belong together. I would have gone with a bigger ring gauge on this Crowned Heads Sfumato in C Major. Add some more filler tobacco to add some more complexity. Too forward on the wrapper, and not strong enough of a leaf to lead.
John: The Crowned Heads Sfumato in C Major is a case of not judging a book by its cover. Although the presentation may not be as flashy as some of the other Crowned Heads offerings, the flavor delivery is balanced and engaging through the first and second thirds. The last third is fairly linear with a largely wood driven profile. The burn was nearly perfect with a single touch-up, and the draw was in the ideal range. I would smoke the Sfumato in C Major again, as I think it was a pleasant and enjoyable experience.
Jiunn: I don’t remember the last time I had a balanced and nuanced Crowned Heads, and I freaking love it! To be honest, Crowned Heads has been a swing and a miss for quite some time (especially the limited edition releases). But the Crowned Heads Sfumato in C Major cures all past blends. Too bad the relationship with Tabacalera Pichardo has ceased. But I will still hold onto hope.