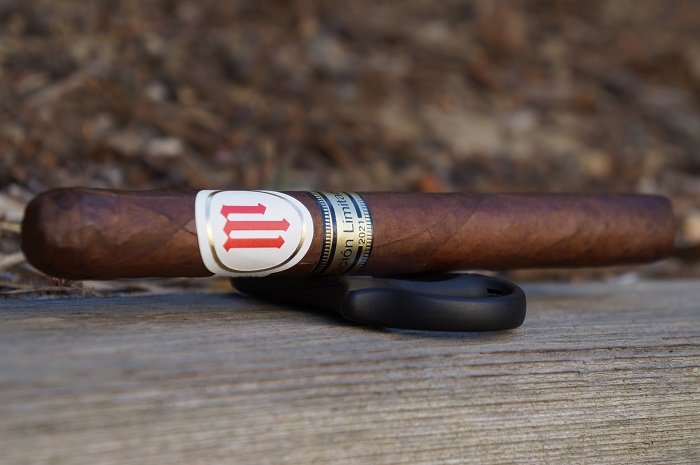 Aaron: The wrapper on the Crowned Heads Mil Días Escogidos Edición Limitada 2021 is medium brown with some dark speckles mixed in and has some lightly raised veins present. The seams are smooth and really only visible due to the color variation on the wrapper, while the head is very well finished. There are two bands, with the primary being the traditional off-white, gold and red band used for the line. The secondary band is the gold and black Edicion Limitada band that the company uses on various releases. The aroma from the wrapper is a mix of slightly musty and sweet wood along with earthiness and baking spices. The foot brings wood and stone fruit sweetness. The pre-light draw brings musty, aged cedar along with amid-level spiciness on my tongue and lips.
Seth: With an aroma of chocolate, nuts, raisins, spices and tobacco on the foot, the Crowned Heads Mil Días Escogidos Edición Limitada 2021 immediately grabs my attention. There are earth, tobacco and barnyard notes present on the wrapper, and the cigar sports a lovely Colorado wrapper. There is this red earth and chocolate coloring on the wrapper and there are few veins present. The cigar is firm throughout.
John: The Crowned Heads Mil Días Escogidos Edición Limitada 2021 comes in cellophane, and has a UPC sticker that tears when opened. The cigar is also double banded. Aromas I was able to pick out included raisin sweetness, potting soil and musty wood. From the foot, the raisin sweetness was the primary aroma.
Jiunn: The Crowned Heads Mil Días Escogidos Edición Limitada 2021 has an even shade of medium roast espresso beans. Veins are well pressed, seams tight, bunch and roll even and head well wrapped. Aromas from the wrapper give dry barnyard and cedar. Aromas from the foot tell the same as the wrapper with some added white pepper spice. Cold draw brings sawdust and faint roasted nuttiness. 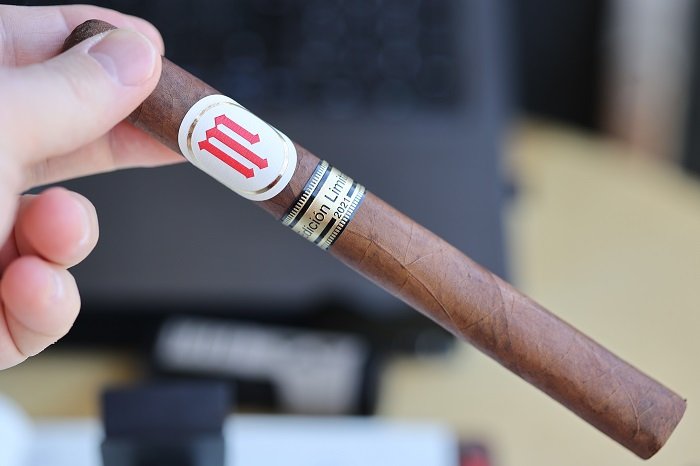 Aaron: The cigar begins with a mix of slightly young cedar and baking spice. At a quarter inch in, some light mustiness joins the profile. At a half inch in, a light earthiness joins in. The retrohale is lightly musty cedar and earth. At an inch and a quarter, the baking spice has transitioned to a dull black pepper. As the third comes to a close, the profile is musty, slightly young cedar, earth and dull black pepper. The strength in this third was slightly below medium.
Seth: The first third starts out by delivering notes of sweet spices, leather, wood and earth. There are some red pepper notes on the finish with touches of cedar and cream as well. I would classify the cigar as smoking at a solid medium level for strength and body.
John: The first third got things started with coffee, wood, baking spices and musty wood to lead into the post draw. Chocolate joined the retrohale a few puffs in. Citrus sweetness moves into the middle of the profile as the cigar progressed.
Jiunn: The first third has an overall easy flow to the cigar. The flavors focus on the soft notes of roasted dried nuts, meatiness, soft doughy bread and cedar. There is however an overcast of slight sharpness and harshness, which if it increases, will throw off the balance of the cigar. Strength and body is medium. 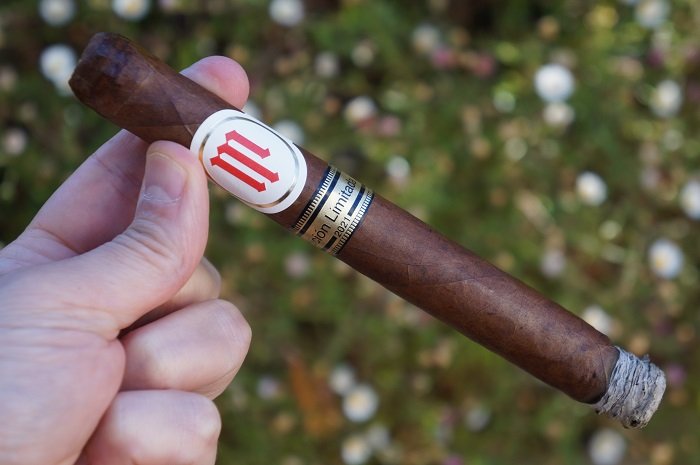 Aaron: The second third continues with the musty, slightly young cedar and earth but the dull black pepper is a bit lighter. The retrohale remains lightly musty cedar and earth. As the third comes to a close, the slightly young cedar and earth remain even with a mild, dull black pepper in the background. The strength in this third bumped up to medium.
Seth: The second third seemed to be right in line with that of the first third. I was getting those red pepper and sweet spice notes, and they were paired with earthy, dry wood and cream flavors. Like before, medium in strength and body.
John: Moving into the second third, the flavors transition to baking spices and tropical fruit sweetness. Dry wood finishes into the post draw, as chocolate sits on the retrohale like the first third. Tannic cedar moves into the middle of the profile as it gets to the halfway point. Musty cedar joins the retrohale at medium strength shortly after. The profile becomes wood forward in the bottom half, moving into the last third.
Jiunn: The second third shifts away from the softer notes and leans more towards sharpness and harshness. There’s more harshness in the form of a metallic bite. This overshadows the softer notes of roasted dried nuts, bread, cedar and game flavors. Strength is reaching towards medium-full, and body is consistent at medium. 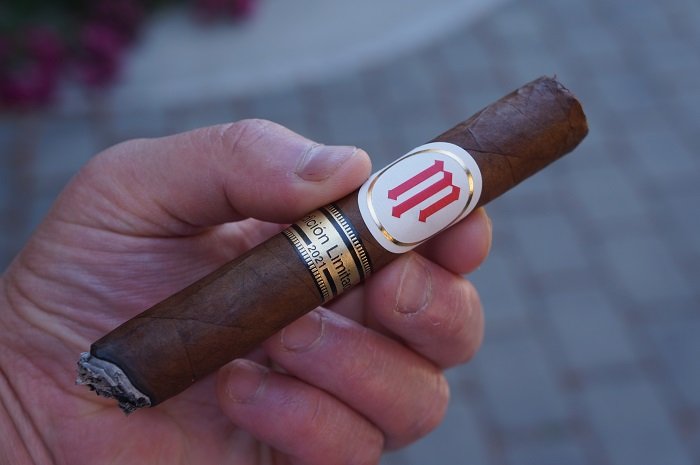 Aaron: As the final third begins, the cedar gains a mid-level toast note. The retrohale is now toasted cedar and earth. At an inch in, the black pepper has departed. The cigar wraps up with an even mix of musty, toasted cedar and earth. The strength remained at medium.
Seth: The final third was fairly in line with that of the first and second. I was picking up cream, dry cedar, pepper and spice notes. There was some earthiness present as well. Still medium in strength and body, the cigar was very balanced.
John: Cedar leads the flavors into the last third, with dry cedar pushing into the post draw. Some bitter earth joins the post draw as it settles in. The profile becomes acrid and earthy as it progresses.
Jiunn: The final third is very similar to the second third. Still a shift towards harshness and sharpness in metallic notes, decreasing the softer notes of roasted dried nuts, bread, cedar, game and a new flavor of dehydrated vegetables. Strength and body overall finishes medium. 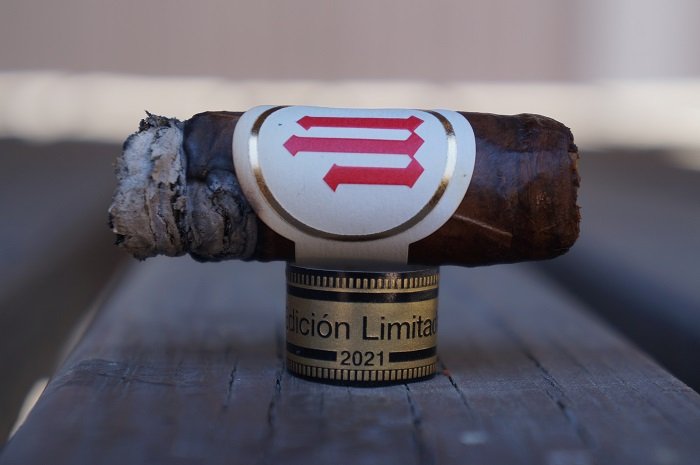 Aaron: The burn was a bit wavy throughout and required one touch-up to keep things going off too far. In the second half of the second third, the cigar went out three times in quick succession and required re-lights.
Seth: Nice burn throughout. Was not always perfect, but never a problem.
John: The ash was a gray-white and held on up to two inch increments. The cigar spontaneously goes out at the halfway point, requiring a re-light.
Jiunn: Aside from a couple quick touch-ups to get the burn back on track, the burn performance was great. 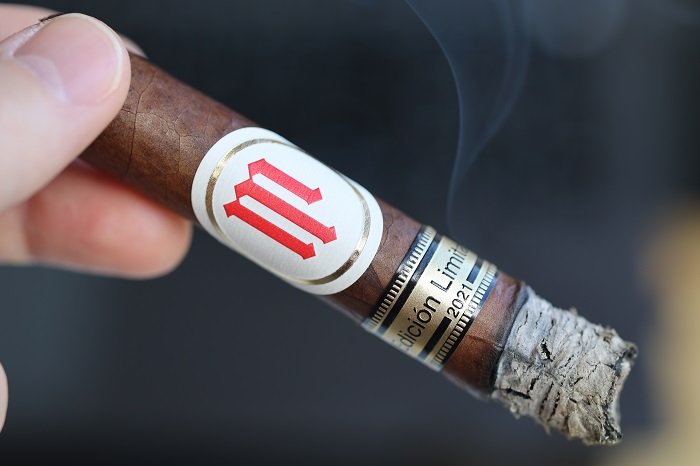 Aaron: The draw was quite tight through the first two thirds and a draw tool provided no improvement. After the final re-light the draw opened up a fair amount.
Seth: Great draw throughout.
John: The draw had some resistance to it, roughly 2-1/2 to 3 notches into the resistant spectrum.
Jiunn: The draw had no issues, creating the ideal air flow.

Aaron: The flavor profile was a muddled mix of slightly young, musty cedar, earth and black pepper. It stayed pretty linear until the final third when the cedar gained a toast note. The construction was a downer as the draw was quite tight and multiple re-lights were needed. The cigar reminded me of a young Cuban cigar with the muddled mix of young cedar, earth and black pepper that I get from some of them that clearly aren’t ready. Even the construction fit in line with those experiences. I’m curious to see what experience the others have. It’s possible these cigars need more time, but even so, I’m not sure that would help with construction.
Seth: The Crowned Heads Mil Días Escogidos Edición Limitada 2021 was not overly complex, but the flavors delivered were enjoyable. I would not consider this a flat or boring double corona, in fact I think highly of it, and I think it was more impressive that it remained consistent and enjoyable from beginning to end. Construction was solid and the cigar smoked slowly. I don’t consider this a disappointment as a limited, and I would buy a box of these to smoke now and age.
John: The Crowned Heads Mil Días Escogidos Edición Limitada 2021 presented some interesting flavors in the first and second thirds, reaching medium strength intensity for most of the review process. The last third unfortunately became bitter and unbalanced and made for a distracting finish. The construction was good, with some resistance to the draw and a re-light required. I generally enjoy the blends that come from Crowned Heads and this release was no different. Total smoking time was 2 hours and 31 minutes.
Jiunn: The Crowned Heads Mil Días Escogidos Edición Limitada 2021 tasted almost like a great finesse style of cigar. Based on the first third, it felt like a cigar made with attention to details in nuance and complexities. For the first third, I’ll give it that. But for most of the smoking experience, the harsh bite in metallic notes basically killed it. I am curious to revisit this cigar in a few months to see if the harshness subsides, in which if it does, it’ll be a hell of a cigar.