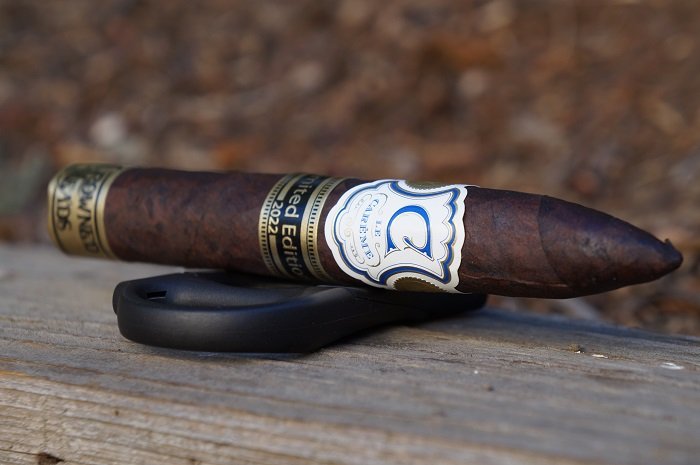 Aaron: The wrapper on the Crowned Heads Le Carême Belicosos Finos 2022 LE is a marbled dark brown. The seams are a bit raised while the tapered head has a bit of the cap lifting at the very tip. There are three bands, with the primary being the traditional band for the line. The secondary is the gold and black LE design the company uses and denotes 2022 and the foot band is also gold and black with the company name that is used on all of the brand’s releases now. The aroma from the wrapper is wood and a light stone fruit sweetness. The foot is a full stone fruit sweetness with light cedar. The pre-light draw brings an even mix of cedar and stone fruit sweetness along with a mild spiciness on my lips.
Seth: Beautiful belicoso that has a great tapered head and veins throughout. Oily as well. I am a sucker for great belicosos. The Crowned Heads Le Carême Belicosos Finos 2022 LE has aromas of rich earth, raisins, cocoa and baking spices. Creamy as well. Cigar is firm throughout. Solid maduro, with some dark raisin color qualities.
John: The Crowned Heads Le Carême Belicosos Finos 2022 LE comes in cellophane, and has a UPC sticker which tears in half when the cellophane is opened. The cigar features three bands with a Le Careme primary band, a Limited Edition 2022 secondary band and a Crowned Heads foot band. Aromas from the wrapper includes sweet tobacco, hay, barnyard and earth. From the foot, I was picking up syrupy sweet tobacco and earth.
Jiunn: The Crowned Heads Le Carême Belicosos Finos 2022 LE has a dark chocolate maduro wrapper shade. Veins are well pressed, seams tight, bunch and roll even and belicoso head well wrapped. Aromas from the wrapper tell of barnyard, beef jerky and cedar. Aromas from the foot give rich black pepper spice, cedar and dried persimmons. Cold draw reveals dried persimmons, black tea and cedar. 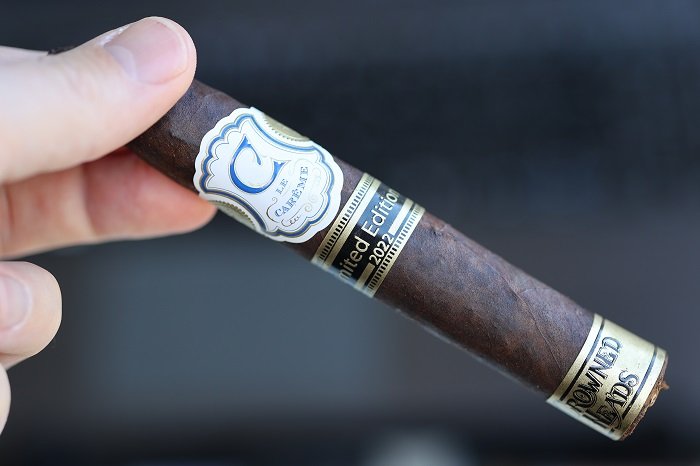 Aaron: The cigar begins with lightly toasted cedar, dark earth and baking spice. At a half inch in, a mellow chalky cocoa note has joined in. The retrohale is toasted cedar, earth and mild baking spice. At an inch in, the baking spice morphs into black pepper. As the third comes to a close, the profile is toasted cedar and earth up front with black pepper a bit behind and mild chalky cocoa in the background. The strength was right at medium.
Seth: The first third starts out with strong red pepper notes that are paired with espresso, dark chocolate and cream qualities. There are some oak qualities present as well, and the finish is that of rich earth and chocolate cake. Medium-full in strength and body.
John: The first few puffs of flavors are creamy baking spices, as baking spices and wood combine into the post draw. Some vegetal notes are present through the retrohale. As the first third settles in, some mild chalkiness comes into the middle of the profile. As the first third progresses, leather moves into the center of the profile. Chalkiness is present on the finish by the 30 minute mark. Approaching halfway, the sweetness is offset by chalky earth.
Jiunn: The first third is dominantly earth forward. Burnt cedar, dry dirt and leather tannins. Retrohaling provides a variation of spices, with black pepper spice and toasted anise. The finish is long, giving plenty of dry dirt and leather tannins. Strength is medium-full, and body is medium. 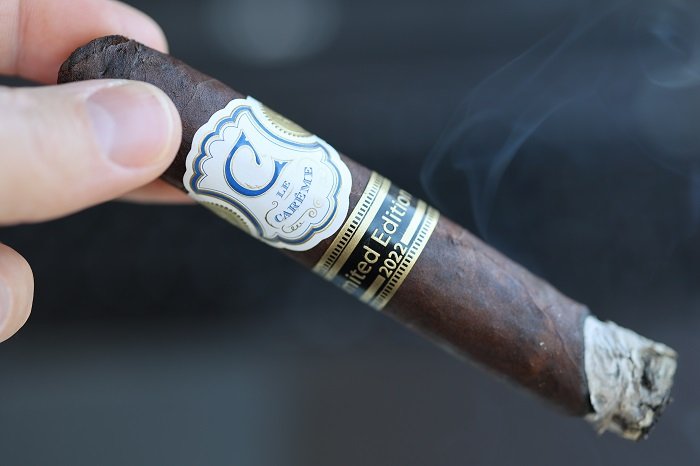 Aaron: As the second third begins, the fullness of flavors drops a little and the overall profile is now a bit dry. At a half inch in, the toast level increases and the cedar transitions to oak. The retrohale is now toasted oak, earth and very mild black pepper. As the third comes to a close, the profile is toasted oak up front with dry earth just behind, black pepper in the middle and mellow chalky cocoa in the background. The strength remained at medium.
Seth: The second third is in line with the first third. I am picking up those red pepper notes and they are paired with strong earth, mocha and espresso qualities. Rich earth and chocolate on the finish. Medium-full in strength and body.
John: My initial flavor impressions are sweet wood with tannic wood and chalkiness combining through the finish. As the second third continues, spices return to the end of the draw and linger well into the post draw. Molasses sweetness mixes in with the spices on the retrohale as it continues. By the halfway point, tannic wood starts to define the post draw.
Jiunn: The second third is still a medium-full strengthened earthy cigar. The same flavors appear; burnt cedar, dry dirt and leather tannins. The finish does reach deeper levels, but it’s still the same highly earthy levels. Body stays medium. 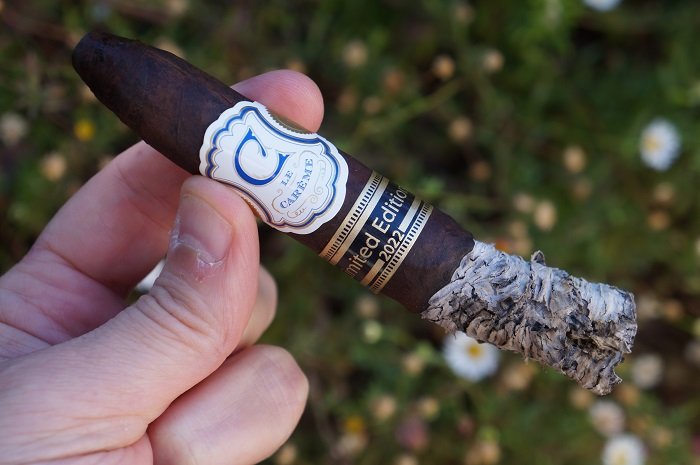 Aaron: As the final third begins, the black pepper is now very mellow. The retrohale remains toasted oak, earth and very mild black pepper. As the cigar wraps up, the profile is toasted oak up front with dry earth behind and black pepper and chalky cocoa in the background. The strength remained at medium.
Seth: The final third delivers a profile of dry earth and wood. Mineral notes present, and there is this sharp spice quality as well. Bits of espresso and mocha. Medium to medium-full in strength and body.
John: The flavors in the last third start with sweet baking spices with mild wood and chalkiness combining into the post draw. As it settles in, some mild chocolate mixes with the chalkiness on the retrohale. Baking spices have moved up to medium strength by the halfway point.
Jiunn: Sounding like a broken record now, but the final third is still unchanged from the earthy flavors of burnt cedar, dry dirt and leather tannins. Strength and body finishes the same medium-full and medium, respectively. 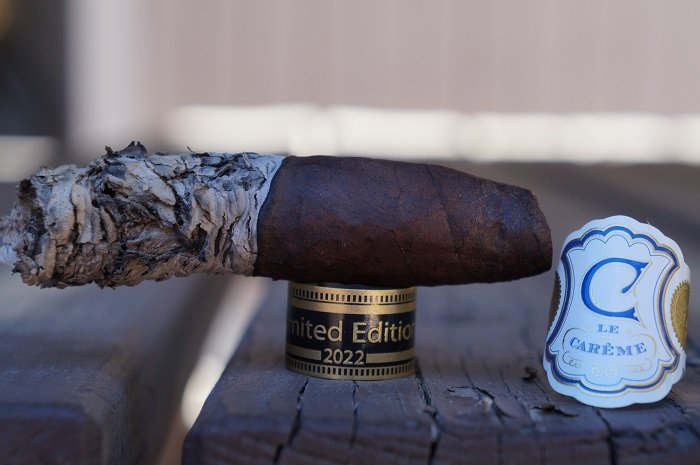 Aaron: The burn was fairly wavy at times, but always self corrected. The ash held on through each third.
Seth: Burn was good throughout.
John: The burn started straight. By the halfway point of the cigar, the cigar went out, requiring a re-light. Some time later, it went out again in the second third, requiring another re-light. Straight burn through the last third.
Jiunn: Overall an impressive burn performance. The only negative being a couple quick touch-ups required due to the hearty broadleaf not burning in line with the other tobacco leaves. 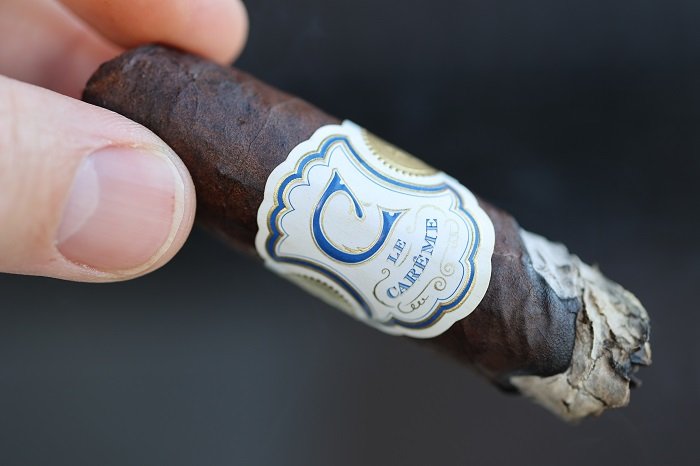 Aaron: The cigar began with lightly toasted cedar, dark earth and baking spice. A mellow chalky cocoa note joined in fairly quickly and the baking spice later morphed into black pepper. The second third saw the fullness of flavors drop down a bit and the cedar transitioned to oak. The final third saw the black pepper move to the background. The Crowned Heads Le Carême Belicosos Finos 2022 LE started well, but the fullness of flavors dropped in the second third and the overall profile became a bit dry. The cigar maintained an average flavor profile the rest of the way. This was my first time smoking the limited edition of this line, but I don’t see myself coming back to this iteration.
Seth: This Crowned Heads Le Carême Belicosos Finos 2022 LE was a fantastic belicoso. For some reason it seemed like a long belicoso, but still fantastic. Great flavors of rich earth, strong spices, sweetness, mocha and espresso. Great evening cigar. I should have cut the tapered head more, I think that would have improved the draw dramatically, but that really was not a factor that prevented me from liking the cigar. Would highly recommend, smoke again and would love to age. Fantastic Connecticut Broadleaf.
John: The Crowned Heads Le Carême Belicosos Finos 2022 LE had some interesting flavors throughout, but I found the ever present chalkiness threw the balance off through the review. In the end, it was a pleasant experience, but for me didn’t elevate itself into something noteworthy. The draw was perfect, with the burn having issues as it went out twice, requiring two re-lights. The price point on this Limited Edition is quite reasonable, especially considering the 2022 market trends. I may try this cigar again in the future to see if the profile remains consistent. Total smoking time was 1 hour and 55 minutes.
Jiunn: As I’ve noted numerous times within my first through final third experiences, the cigar is too earth forward without the necessary surrounding cast to make it a good symphony. Connecticut Broadleaf is innately earthy and it’s great the profile hit that note, but good broadleaf is far more than that. This cigar did not bring forth the goodness of a dense, chewy smoke with soft flavors such as chocolate and cream. As such, this is a pass for me.