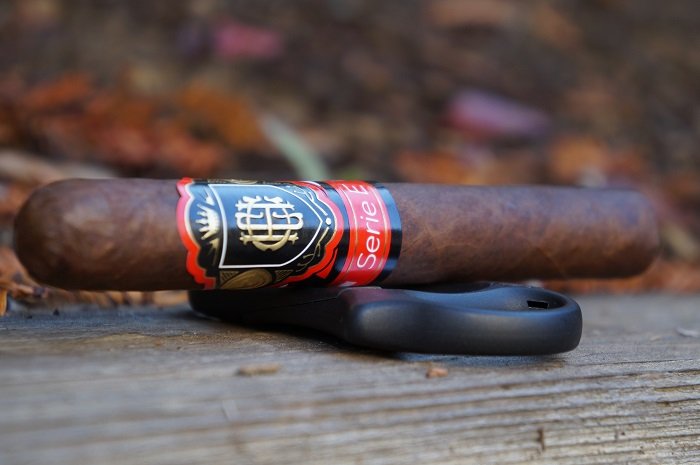 Aaron: The wrapper on the Crowned Heads CHC Serie E 5150 is a marbled medium brown while there is a lighter shade that surrounds the few slightly raised veins present. The seams are smooth and the head is finished pretty well but has the top cap with some lifting edges. The band is black, gold, red and white and denotes the line name. The aroma from the wrapper is musty wood and light stone fruit sweetness. The foot brings wood, pepper and some tropical fruit sweetness. The pre-light draw brings aged cedar and light tropical fruit sweetness.
Seth: The Crowned Heads CHC Serie E 5150 sports a wrapper that is Natural to Maduro in coloring. There are small to medium sized veins present throughout and the cigar is slightly smooth with some grit in texture. The cigar is firm throughout and I am getting aromas of rich earth, spices, oak and bourbon.
John: The Crowned Heads CHC Serie E 5150 comes in cellophane, and has a UPC sticker with an integrated tear point to leave it intact when the cellophane is opened. The cigar has a single, wide band indicating Serie E at the bottom. For aromas off the wrapper, I could pick out sweet raisin, barnyard and aged wood. From the foot, there was sweet hay and tobacco.
Jiunn: The Crowned Heads CHC Serie E 5150 has a rustic Colorado Red wrapper shade. The wrapper quality is good, providing a smooth texture and some oily content. Veins are well pressed, seams tight, bunch and roll even and head well wrapped. Aromas from the wrapper tell faint cedar and sea kelp. Aromas from the foot give white pepper and cedar. Cold draw gives cedar, nuts and metal. 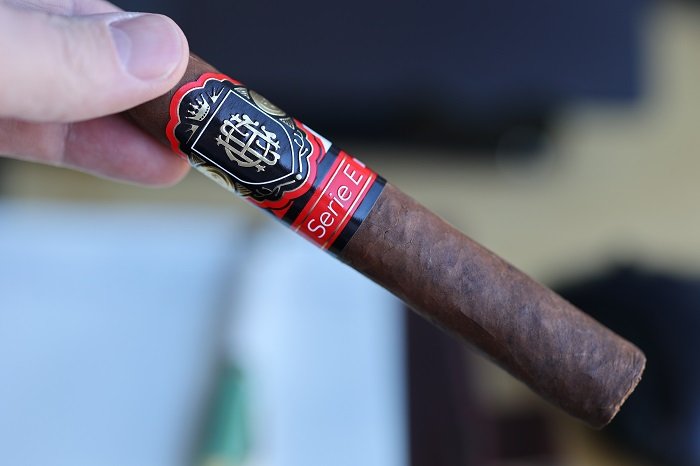 Aaron: The cigar begins with toasted cedar and a bold baking spice/black pepper combination. At a quarter inch in, the baking spice is swallowed by the black pepper. The retrohale is an even mix of toasted cedar and nose tingling black pepper. At an inch in, some light mustiness joins the profile. As the third comes to a close, the toasted cedar is slightly ahead of the black pepper along with light mustiness. The strength in this third was slightly above medium.
Seth: The first third starts with this meaty, leather, citrus pepper profile. I am picking up coffee and spice notes with that, and it has a strong peppery spice finish. In terms of strength and body, I would classify the cigar as a solid medium for strength and body.
John: With the first few puffs, my flavor impressions were medium strength baking spices and wood. That wood lingers through into the post draw. Some black pepper at medium-full strength settled on the side and front of my tongue. As the first third progressed, that pepper intensity faded back to medium strength, as some creaminess joined the retrohale. Chocolate joins the retrohale by the 15 minute mark.
Jiunn: The first third provides a chalky/fudge (w/o the sweetness) profile. Lots of cedar, somewhat of a baker’s chocolate, and baking spices. Retrohaling is where it’s at, as its full of flavors. I’m getting more baking spices and baker’s chocolate. The finish is namely dirt and cedar. Strength is medium, and body is medium-full. 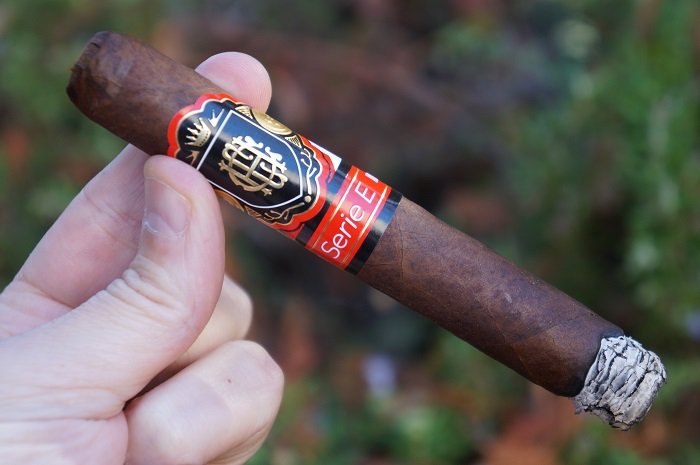 Aaron: As the second third begins, the mustiness increases. At a half inch in, the black pepper mellows slightly. The retrohale is musty, toasted cedar with black pepper a bit behind. At an inch and a quarter, the musty, toasted cedar has created a larger gap over the black pepper. The strength in this third remained at slightly above medium.
Seth: The second third delivers this herbal and citrus profile that is paired with that pepper and sweet spice profile. I am picking up some coffee, cream and coconut flavors, and the finish continues to show those pepper qualities. Like before, medium in strength and body.
John: The second third continues much of the flavor themes from the first third. Chocolate, along with cream and cedar make up the retrohale. Baking spices at medium strength return to the center of the profile as the second third progresses. By the bottom half, some mild leather has joined the post draw. Earth carries into the post draw as the cigar moves towards the last third.
Jiunn: Not much new to note on the second third. It’s still the same chalky backbone with earthy cedar, dirt and baking spices. Strength and body is unchanged at medium and medium plus. 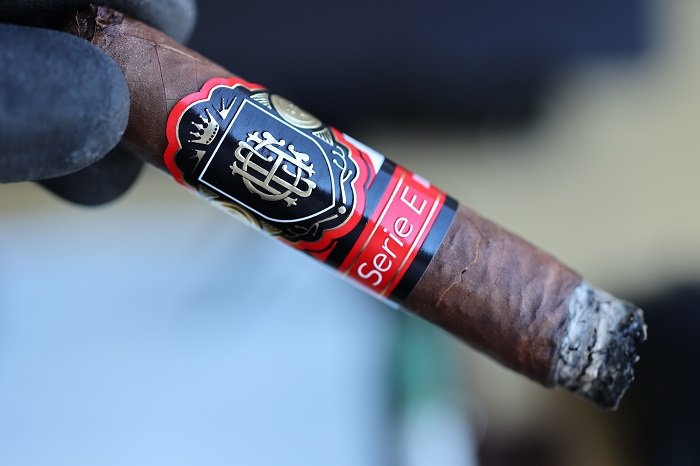 Aaron: As the final third begins, the toast level becomes pretty heavy. The retrohale is now musty, toasted cedar with light black pepper. At three quarters of an inch n, the heavy toast has transitioned to a light char and some light bitterness has also joined in. As the cigar wraps up, the profile is musty, lightly charred cedar with black pepper a bit behind and mild bitterness. The strength in this third bumped up to medium-full.
Seth: The final third is really a continuation of the second third in terms of flavors delivered. Didn’t end poorly though. Really a true continuation of the second third. Same strength and body.
John: The last third got started with creamy earth, and medium strength baking spices that linger into the post draw. That earth quickly moves to the front of the profile as the last third progressed. The earth fades somewhat, as creaminess pushes back towards the front of the profile.
Jiunn: The final third mixes in harshness and bitterness to the cedar, sometimes even picking up a smoked wood character. But it’s still very much chalky, dirt and baking spices. Strength and body finishes the same medium and medium-full. 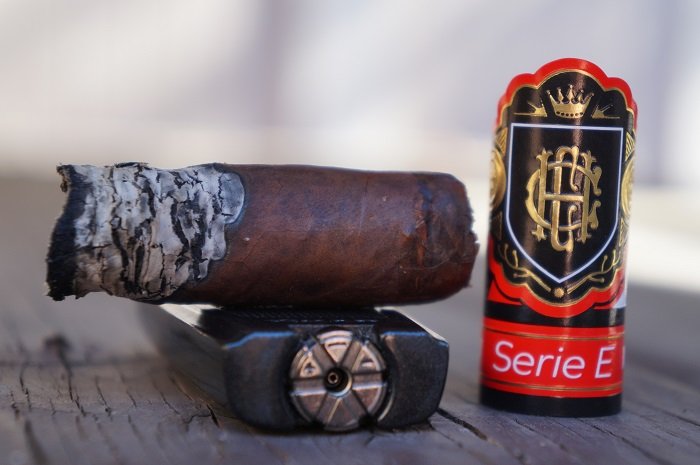 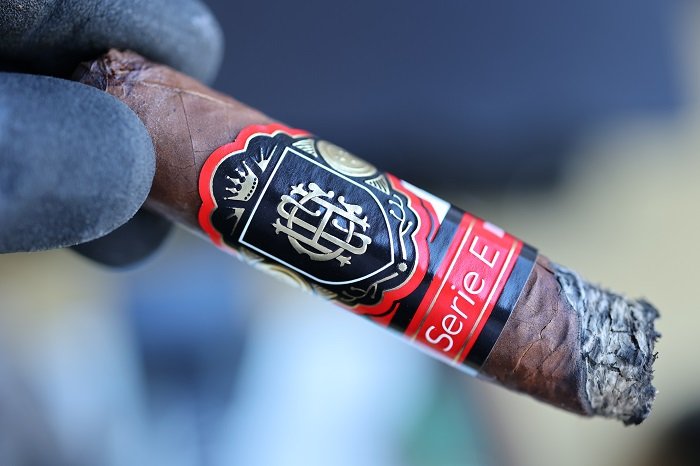 Aaron: The draw was slightly tighter than I prefer, but didn’t seem to cause any issues with the smoking experience.
Seth: Nice draw.
John: The draw had a mild amount of resistance to it, roughly 1-1/2 to 2 notches into the resistant spectrum.
Jiunn: The draw was overall good. A bit snug, but not a material issue.

Aaron: The cigar started with toasted cedar and bold black pepper. Some mustiness later joined. As the cigar went along, the toast level increased and transitioned to char. The burn was horrible as the cigar went out five times. If you’re a fan of Nicaraguan pepper tongue, then the Crowned Heads CHC Serie E 5150 is for you. I didn’t find the flavor profile very enjoyable and the burn issues just compounded the lack of enjoyment. An easy pass for me.
Seth: I am not sure on the Crowned Heads CHC Serie E 5150. I was not blown away or disappointed. Not the best release from Pichardo, but not the worst. I am not thrilled on the price of the cigar though, so in the end that would prevent me from buying these down the road. I enjoyed the second third the most when looking at the cigar, but not worth going through the first third and not worth wasting the final third.
John: The Crowned Heads CHC Serie E 5150 delivered a spicy and flavorful medium-full bodied experience through the review. The most interesting combinations came through in the first and second thirds, with the last third pleasant, but lacking the same complexity. The draw only had a minor amount of resistance, but the burn suffered, requiring three re-lights through the review. I’m quite surprised that the re-lights didn’t seem to impact the flavor profile, and I’m interested in revisiting the CHC Serie E 5150 in the future. I would smoke this again, especially to see if the flavor improved assuming no burn issues. Total smoking time was a respectable 1 hour and 51 minutes.
Jiunn: I feel like the Crowned Heads CHC Serie E 5150 is one of those cigars that almost made it. With just a couple tweaks, it could have been a tasty experience. The one major component lacking was sweetness. If somehow it gave a sweetness to that chalky, baker’s chocolate note, it would have really made a big difference. I would actually happily deal with the lackluster burn if it gave that to me. But as is, I will pass.