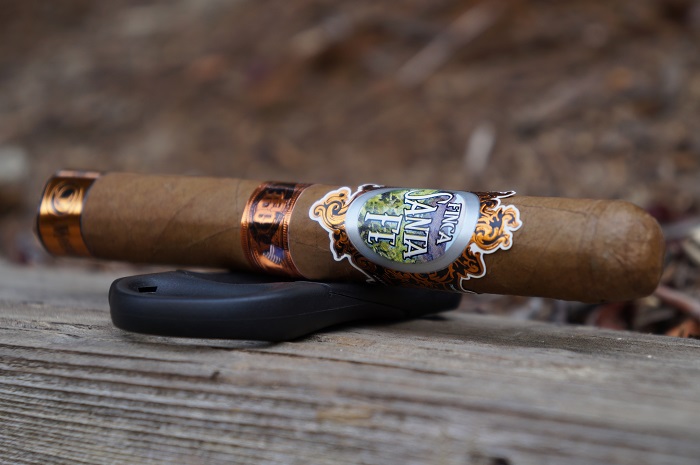 Aaron: The wrapper on the Cordoba & Morales Finca Santa Fe FSG Cameroon is light brown with some green marbling along with a network of lightly raised veins and a covered foot from excess wrapper. The seams are smooth and the caps well applied. There are three bands, with the primary being copper and black with a picture of a field and denoting the line name. The secondary band is copper and black, denoting FSG as well as the text and flags of Cuba and the U.S. The foot band is also copper and black and denotes the company name. The aroma from the wrapper is a light mix of wood and hay while the foot brings the same along with some light sweetness. The pre-light draw brings lightly sweet, aged cedar.
Seth: The Cordoba & Morales Finca Santa Fe FSG Cameroon features a wrapper that is toothy with small to medium sized veins throughout. The coloring is that of antique wood and it is between Natural and Colorado in coloring. The cigar features an aroma of faint charred oak, mesquite BBQ, fruit bread, earth and spices.
John: The Cordoba & Morales Finca Santa Fe FSG Cameroon pulls out all the stops for the pre-light experience. The cigar comes in cellophane, with a UPC sticker that has an integrated tear point to leave the UPC intact. The cigar is triple banded, with FSG as the secondary band, and Cordoba Morales as a footband. Additionally, the cigar has an artisanal complication of a closed food. Aromas off the wrapper included a musty, sweet orange citrus, and bread. Since the foot was closed, I wasn’t able to pick out anything distinct. Unfortunately, on the cigar I was reviewing, a piece of the wrapper was lifting off about an inch from the foot.
Jiunn: The Cordoba & Morales Finca Santa Fe FSG Cameroon has a Colorado Claro like wrapper shade. Veins are well pressed, seams tight, bunch and roll even and head well wrapped. Aromas from the wrapper tell faint campfire and barnyard. Aromas from the enclosed foot give a nutty sweetness and white pepper spice. Cold draw reveals faint cedar. 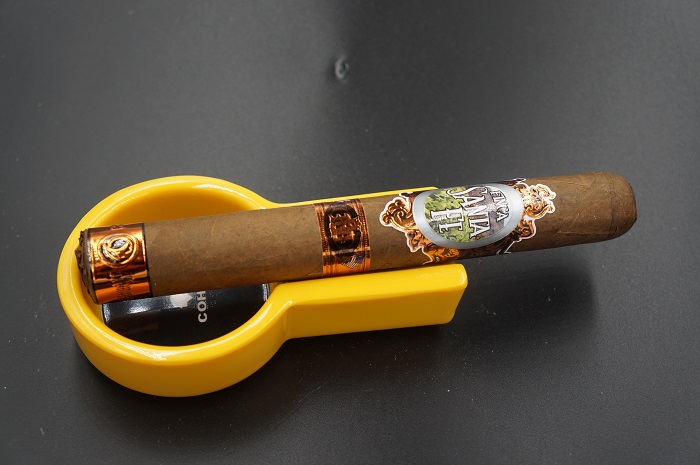 Aaron: The cigar begins with lightly musty and toasted oak along with some black pepper in the background. At a half inch in, the black pepper picks up a bit. The retrohale is toasted oak and mild black pepper. At an inch and a half, some rich earth joins the profile. The third wraps up with musty, toasted oak up front with rich earth and black pepper a bit behind. The strength was right at medium.
Seth: The first third starts off with this original bubblegum flavor that is paired with some peppery spice qualities. I am getting some tobacco and leather qualities with that, and there is this soft coffee quality on the finish. In terms of strength and body, I would classify the cigar as medium-full.
John: My first third experience gets going with sweet, musty orange citrus, and baking spices combined with rye bread to finish. A mild, dry wood finishes each draw after a few puffs. I start to get herbal aromas, and not long after herbal notes break through into the retrohale. Pepper builds on the retrohale up to medium-full in strength. Roughly 15 minutes in, orange citrus has moved into the center of the profile. Not long after, some chocolate at light strength joins the retrohale.
Jiunn: First third has understated notes as compared to notes that are loud and bright. A key hay/grassiness is prevalent, with trailing cedar, nuts and subtle baking spices. On the retrohale, the flavors awaken. Notes of intensified baking spices, cream and sweet roasted nuts. The finish is full of tannins, especially on the entire tongue. Strength and body is medium. 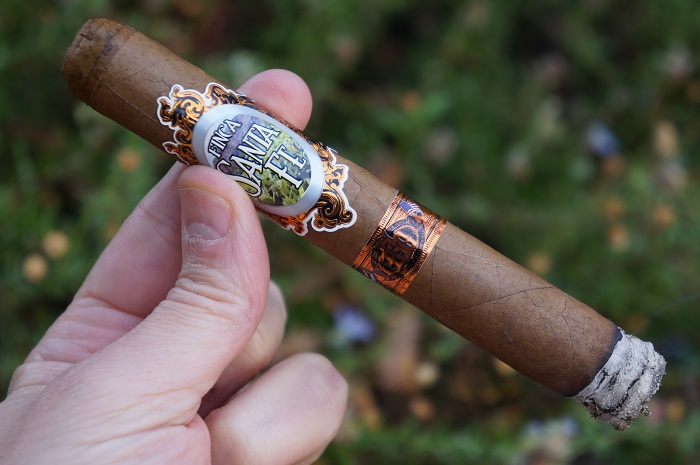 Aaron: The second third begins with the toast level increasing. At a half inch in, the earthiness has become dry and the black pepper is now right behind the musty, toasted oak. The retrohale is now musty, toasted oak and dry earth. At an inch and a quarter, the overall profile has become fairly dry. As the third comes to a close, the musty, toasted oak and dry earth are even with the black pepper a bit behind. The strength in this third remained at medium.
Seth: The second third delivers a flavor profile that shows wood qualities, salt notes, soft pepper spices, earth, coffee and cream qualities. Medium to medium-full in strength and body. Lovely second third. Not overly complex, but great flavors.
John: A musty orange citrus takes the cigar into the second third, with less sweetness than in the first. The profile becomes more of a combination of wood and musty citrus as it progresses. Dry wood lingers between the draws by the halfway point.
Jiunn: The second third showcases a little less complexity. I’m mainly getting a mouth full of tannins with hay/grassiness and cedar. Not much in terms of spice or sweetness. Strength and body remains medium. 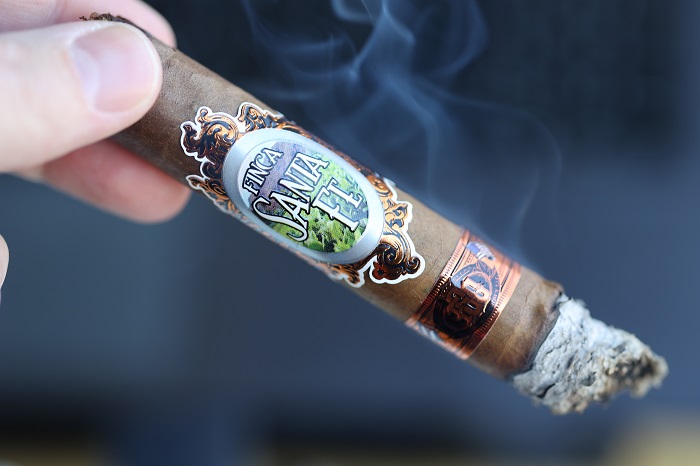 Aaron: The final third begins as a continuation from the second. At a half inch in, the black pepper becomes very mellow. The retrohale remains musty, toasted oak and dry earth. The cigar wraps up with musty, toasted oak and dry earth even and light black pepper in the background. The strength remained at medium.
Seth: The final third delivers a flavor profile of sweet spices, tobacco, leather and earth. There are cocoa, coffee and cream qualities present as well. Body and strength are right around that medium level. Nice finish to the cigar.
John: Again, the cigar starts out with a musty wood and dry wood to finish each draw into the post draw. There is a slight sharpness on the post draw and through the retrohale. The dry cedar begins to linger on the tip of my tongue as it progresses. Some mild orange citrus is present in the center of the profile, but run over by the intensity of the wood. By the mid point, bitterness is present now and again on the middle of my tongue through the post draw.
Jiunn: The final third doesn’t change. Still medium strength and body with full tannins, flavors of hay/grass and cedar. A bit uneventful but at least there are no foul tasting flavors. 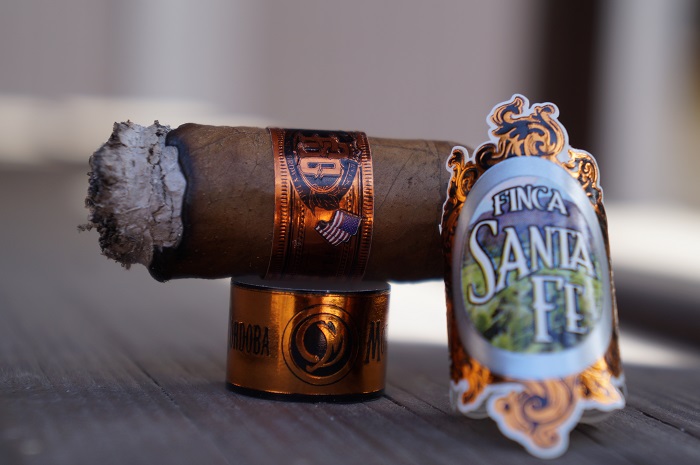 Aaron: The burn line was a bit wavy, but never required any attention. The ash held on in one inch increments.
Seth: Great burn throughout.
John: The burn was relatively straight throughout the review. The ash had some flakiness through the second third, and the wrapper pulled off slightly in the second third, and a crack formed in the last third. This is no doubt as a result of a thinner Cameroon wrapper in a colder, dry Canadian environment.
Jiunn: Perfect burn. Even, solid ash marks, cool burning temperature and ample smoke production. 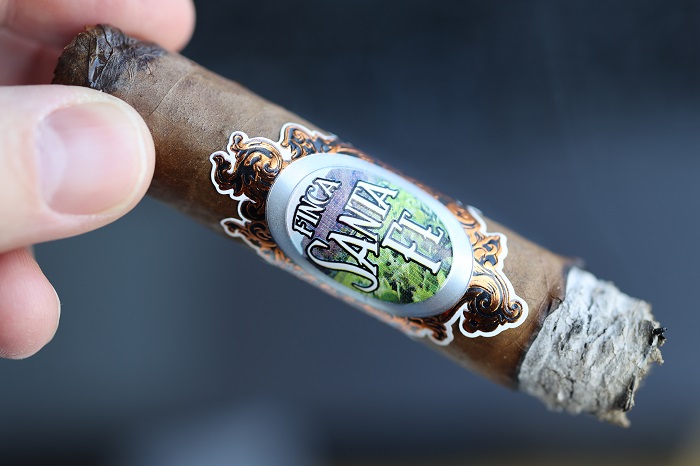 Aaron: The cigar began with musty, toasted oak, black pepper and rich earth. By the second third, the earth had become dry and the overall profile was a bit dry. The black pepper mellowed as the cigar went along. The Cordoba & Morales Finca Santa Fe FSG Cameroon had a nice first third with a good mix of flavors and richness. Unfortunately, that richness faded away and the profile became dry from the second third on. The two FSG versions of this line haven’t been able to live up to the original release and I wouldn’t see myself coming back to this cigar, but looking for that original release when revisiting this line.
Seth: I really enjoyed this blend. I thought it delivered some Cameroon and FSG qualities that I enjoy, but I believe the Cordoba & Morales Finca Santa Fe FSG Cameroon is young and needs more time to rest. I also feel that these cigars need to be dry boxed for a period before smoking. I liked the balance between saltiness, sweetness and spice. The body and strength were perfect throughout, and the draw and burn were great. It is a dryer cigar in my opinion, and that may not be to the liking of others, but I enjoyed it. You will need to put some time into this cigar before even smoking, and with the price, it may make this cigar less appealing.
John: The Cordoba & Morales Finca Santa Fe FSG Cameroon started out very promising, delivering some of the best aspects of FSG tobacco. By the second third, the musty wood combination was driving the profile and much of the complexity from the first third was gone. The last third was largely wood forward, and while pleasant, didn’t stand out for me. The burn was relatively flawless, with the draw having a fair amount of resistance to it. The cigar was pleasant to review, but the price tag versus the flavor profile delivery makes this cost prohibitive for me to return to for another sampling. Total smoking time was 1 hour and 47 minutes.
Jiunn: Coming into this (expensive) cigar review, I wasn’t sure about the flavor experience. What I was sure about was the high chance that it’ll be a balanced cigar given Azarias’s hand in blending it. I was right. But I wish the flavor profile showed more than the overall full tannins, hay/grass and cedar. By no means is the Cordoba & Morales Finca Santa Fe FSG Cameroon a bad cigar since it technically performed beautifully. But I’m going to need more than just a great technical performance out of a $23 price tag.