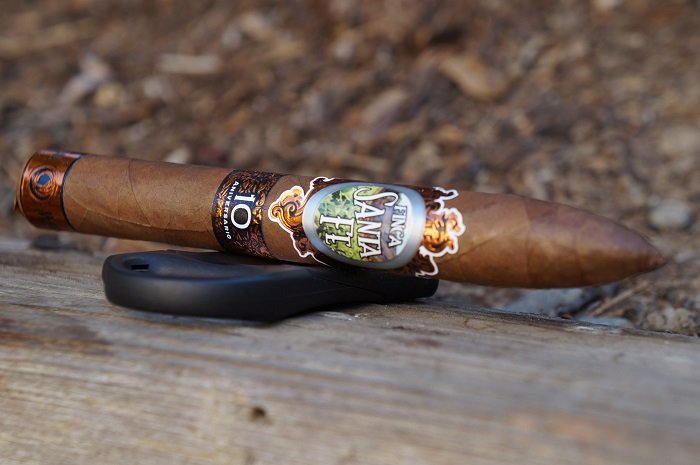 Aaron: The wrapper on the Cordoba & Morales Finca Santa Fe 10th Anniversary is light brown and has a few lightly raised veins present. The foot is covered with excess wrapper that is folded over. The seams are smooth and the tapered head well finished. The cigar seems a bit light for its size. There are three bands, with the primary and foot bands being the traditional design for the line. The secondary band has the same copper and black color combination and denotes the anniversary. The aroma from the wrapped and covered foot is just a light mix of wood and cardboard. The pre-light draw brings sweet cedar.
Seth: Beautiful torpedo with a nice, closed foot. Firm throughout, the Cordoba & Morales Finca Santa Fe 10th Anniversary has veins that are small to large throughout. Nice solid Colorado coloring with medium veins. Sandy with some red clay coloring. Aromas of shaved wood, sweet spices, leather and dry earth. Fruity notes as well.
John: The Cordoba & Morales Finca Santa Fe 10th Anniversary comes in cellophane and has a UPC sticker that tears in half when the cellophane is opened. The cigar is a torpedo vitola, and is triple banded. The primary band indicates Finca Santa Fe, the secondary band says 10 Aniversario and the foot band indicates Cordoba & Morales. Additionally, the cigar has an artisanal complication of a closed foot. Aromas from the wrapper included bread, old wood, barnyard and a musty sweetness. As the foot was closed, I couldn’t pick up anything unique or distinct apart from the wrapper aromas.
Jiunn: The Cordoba & Morales Finca Santa Fe 10th Anniversary has an oily Colorado Claro wrapper. Veins are well pressed, seams tight but visible, bunch and roll slightly lumpy and the aggressive torpedo head is well wrapped. Aromas from the wrapper give rich, roasted chestnuts and barnyard. Aromas from the foot add a pungent white pepper spice. Cold draws reveal barnyard and spicy cedar. 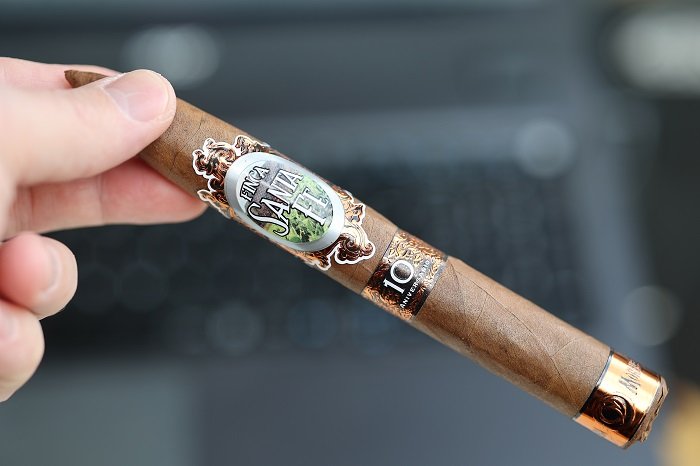 Aaron: The cigar begins with toasted cedar and light amounts of black pepper and cardboard. At a quarter inch in, the cardboard note goes away. The retrohale is an even mix of toasted cedar and slightly zingy black pepper. At an inch in, a light chalkiness becomes present. At an inch and a half in, the black pepper picks up a bit. As the third comes to a close, the profile is toasted cedar up front, black pepper a bit behind and light chalkiness in the background. The strength was right at medium.
Seth: The first third starts out with lovely mineral and hay notes. I am picking up some herbal and floral qualities as well, and the finish has this light wood and peppery combo. Medium in strength and body.
John: Through my first few puffs, I’m identifying flavors of sweet, light bread, a fading dry hay and some dried vegetal notes through the end of the draw. By the 20 minute mark, the profile adds a mild coffee and dry wood combination through the retrohale. By the 35 minute mark, some light chocolate also joins the retrohale, adding another layer of complexity.
Jiunn: The first third shows good composure. There’s no peaks in flavors, instead, it’s a pretty well melded flavor profile of assertive black/red pepper spice, toasted almonds, buttered toast and cedar. Retrohaling gives a mixture of black/red pepper spice, cedar and ripe apricots. The finish shows layered black/red pepper spice and cedar. Strength and body is medium. 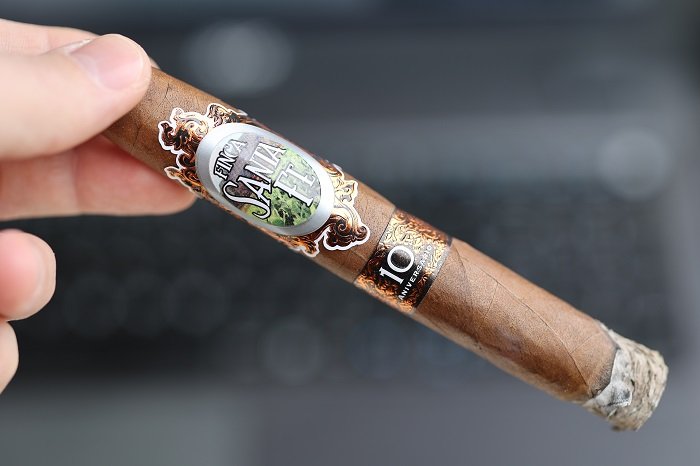 Aaron: As the second third begins, the toast level increases. At a half inch in, a light creaminess joins the profile. The retrohale now has the toasted cedar up front and black pepper and creaminess even behind it. At an inch and a half in, a light wood bitterness joins the profile as the chalkiness departs. As the third comes to a close, the toasted cedar is up front with black pepper and creaminess a bit behind and light wood bitterness in the background. The strength remained at medium.
Seth: The second third delivered a lot of those enjoyable qualities from the first third. I was picking up great mineral and herbal notes that were paired with some leather, wood and dry earth. Pepper flavors present as well. Like before, medium in strength and body.
John: The second third gets started with dry wood and a combination of dark earth and mild coffee in the center, as lingering wood carries through the post draw. As the second third settles in, sweet nuttiness takes over the center of the profile. By the bottom half of the second third, saltiness is present through the main profile.
Jiunn: The second third maintains the same composure. Still very balanced with assertive black/red pepper spice, toasted almonds, buttered toast and cedar. There’s a fruit component to the profile as well. I can’t quite pinpoint it, but the general vibe of it is stewed fruits. Strength is teetering to medium-full, while body remains medium. 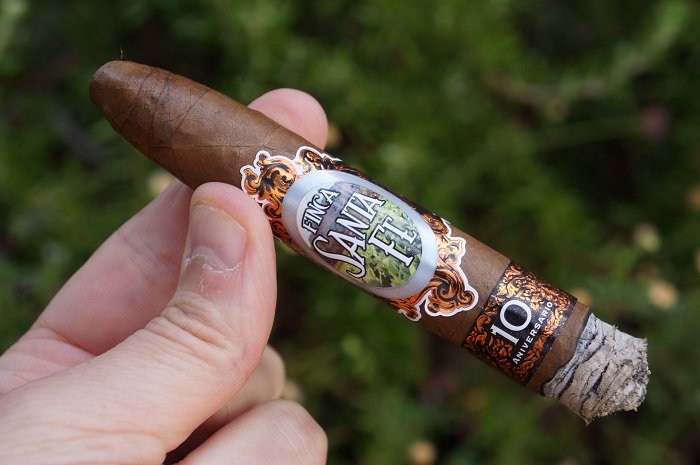 Aaron: As the final third begins, the toast level is now pretty heavy. The retrohale is now heavily toasted cedar with black pepper a bit behind. At an inch in, the wood bitterness increases a bit and is showing a long finish. As the cigar wraps up, the profile is heavily toasted cedar with wood bitterness a bit behind and light amounts of black pepper and vegetal notes in the background. The strength remained at medium.
Seth: The final third is right in line with the second third. I am picking up those herbal and mineral notes that are paired with wood, leather and dry earth. Pepper flavors present as well. Medium to medium-full in strength and body.
John: My first few puffs in the last third bring a salty dry wood, with nutty, dry wood into the post draw. Dry hay drives the profile for the remainder of the review as it settles in.
Jiunn: Towards the latter half of the final third, the profile shows minerals first and the remaining aforementioned flavors second. But it’s still a balanced mixture of flavors. Strength increases to medium-full, while body remains medium. 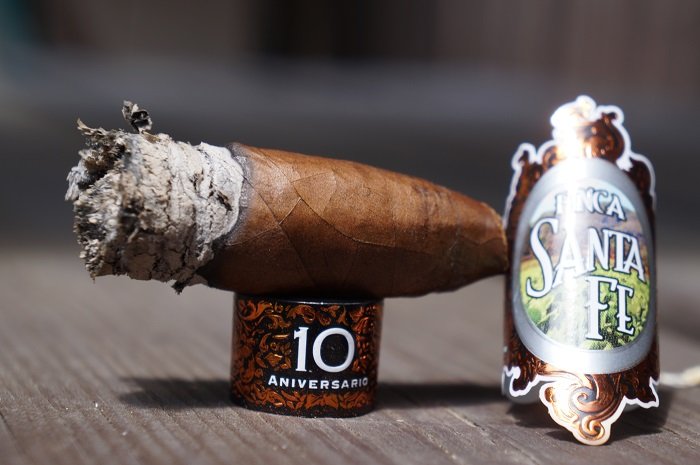 Aaron: The burn was slightly wavy at times, but never needed any intervention. The ash held on in inch and a quarter increments.
Seth: Fantastic burn.
John: The burn started straight, with some wrapper not burning as the first third progressed. The burn self corrected and no intervention was required through the second third. In the last third, the cigar went out twice, requiring two re-lights.
Jiunn: Burn performance had a pesky flowery ash that fell everywhere as well as a couple quick touch-ups to get the burn on track. Aside from that, no issues. 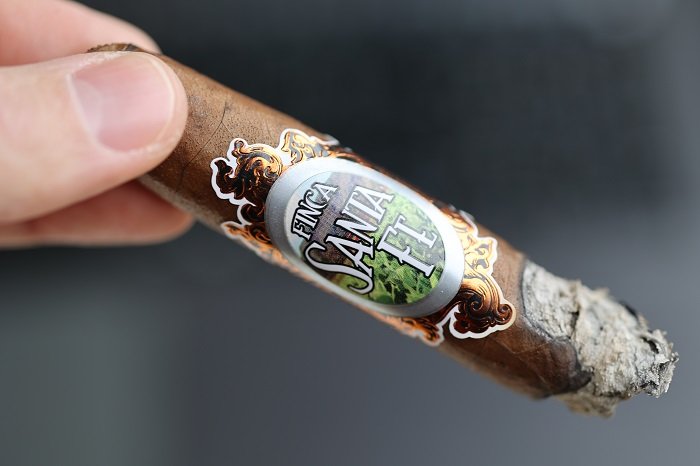 Aaron: The cigar began with toasted cedar and light amounts of black pepper and cardboard. The cardboard note left fairly quickly and some light chalkiness joined in. The second third saw a light creaminess and some wood bitterness join while the chalkiness departed. The final third saw a light vegetal note join towards the end. The Cordoba & Morales Finca Santa Fe 10th Anniversary had a basic and fairly average flavor profile throughout. Nothing that really got or kept my attention. With this being an anniversary release for a line that I’ve enjoyed in the past, this was a bit disappointing. Add in the high price point, and it’s not likely a cigar I’d return to.
Seth: I really enjoyed the Cordoba & Morales Finca Santa Fe 10th Anniversary. I liked the flavor profile that was delivered and the strength and body that matched. It had a dryer Nicaraguan flavor profile, not as earth forward as some blends, so there was this nice balance between woood, leather, mineral and spice qualities. Higher price range than I would like, but a lovely torpedo.
John: The Cordoba & Morales Finca Santa Fe 10th Anniversary started out with unique flavor combinations that were engaging and pleasant. Once into the second third, the profile became quite drying on the palate and lost much of what made it stand out in the first third. The last third was not overly dynamic, so I wasn’t as engaged as the first third. The draw was perfect, and the cigar went out twice in the last third requiring two re-lights. The Finca Santa Fe 10th Anniversary is a rare miss for me from Cordoba & Morales. Given the premium price point, I am more likely to pick up another offering in their core range. Total smoking time was 1 hour and 43 minutes.
Jiunn: It’s good to be reminded of Azarias’ harmonious blending capabilities. I don’t often smoke his brand, but after this experience, I need to think twice about that. The profile of the Cordoba & Morales Finca Santa Fe 10th Anniversary showed great balance of spice, earth, sweet and fruit. It touched on everything a good cigar should be. I look forward to having more of these.