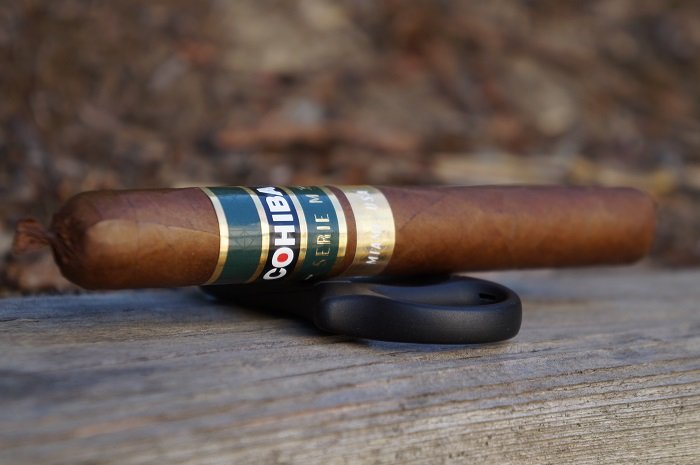 Aaron: The wrapper on the Cohiba Serie M is light brown and has a network of lightly raised veins present. The seams are a bit raised in some areas, the head is finished off with a flag and the foot is covered with excess wrapper folded over. There are two bands, with the primary being the newer design for the brand and carrying a green, black and holographic gold color combination and denoting the brand and line. The secondary band is holographic gold and denotes Miami, USA. The aroma from the wrapper and covered foot is a mix of cedar and light earth. The pre-light draw is all Spanish cedar as if you had just gotten into a brand new humidor.
Seth: Finished with a beautiful Colorado wrapper, the Cohiba Serie M has a lovely bit of tooth present. Few veins throughout, with those presents being small. Great fantail cap and closed foot. Firm throughout. Silky in texture. Aromas of ocean salt, wood, Indian curry and tobacco. Some faint bread and cheese notes.
John: The Cohiba Serie M is cellophaned, with no UPC code and has a cedar sheet backing, which I assume is intended to be used as a spill to light the cigar. The cigar is double banded with “Miami, USA” for the secondary band. Additional complications included a closed foot, and a pigtail cap. Aromas from the cigar included a rich mustiness, mushroom and old barnyard. Since the foot is closed, I wasn’t able to pick up anything distinct there.
Jiunn: The Cohiba Serie M has a shade that’s a tad darker than Colorado Claro. Veins are roughly pressed, seams tight, bunch and roll even and the flared tip head is well wrapped. Aromas from the wrapper give hay and strong, wet barnyard. On the foot, there’s a mixture of roasted nuts and cedar. Cold draw tells hay, dried cherries and paper. 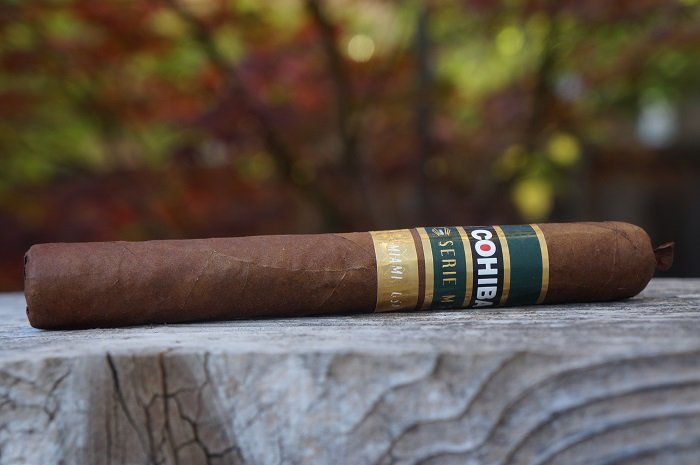 Aaron: The cigar begins with a mix of toasted cedar, black pepper and light earth. At three quarters of an inch in, the toasted cedar and earth are even while the black pepper is slightly behind. The retrohale is an even mix of toasted cedar and dry earth. As the third comes to a close, the toasted cedar and earth remain even while the black pepper is fairly mild. The strength in this third was slightly below medium.
Seth: The first third opens with some red pepper and cream notes. There are honey qualities present as well, and I am picking up almond and cashew notes on top of that. There are cedar, earth and coffee bean notes present on the finish, and it is smoking around a medium-full level for strength and body.
John: The first third gets things started with musty cedar and light baking spices. The wood and baking spices are more intense at medium strength through the retrohale. After a few puffs more, powdered cocoa joins the retrohale as the spices move to full, and are white pepper forward. By the 30 minute mark, light graham cracker adds some sweetness. Light plus dry wood moves into the post draw not long afterwards.
Jiunn: The first third presents a full flavored experience that’s also well balanced. Plethora of sweet and creamy King’s Hawaiian bread, meatiness (both in the sense of a chewy texture and actual animal meat), dried nuts and a white pepper spice that’s long and lingering. On the retrohale, the white pepper spice speaks the most volume, followed by roasted nuts and ginger snap cookies. Strength is medium-full and body is medium. 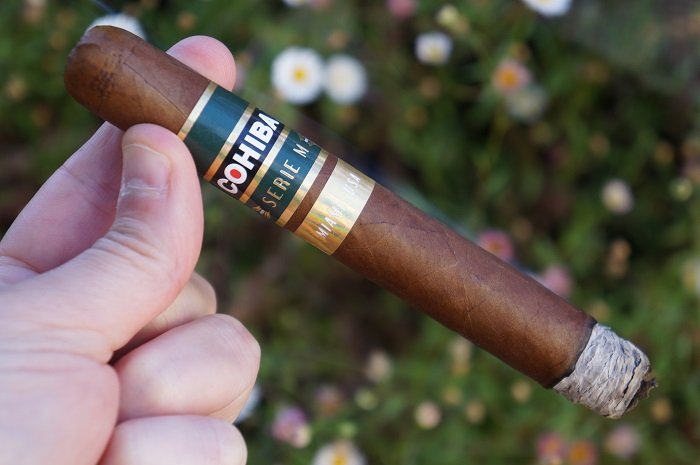 Aaron: The second third is a continuation of the first, with the earth now being fairly dry and creating an overall dryness to the profile. The retrohale maintains the even mix of toasted cedar and dry earth but now has a light black pepper in the background. At an inch and a half in, a slight ashiness joins the profile. The strength in this third remained at slightly below medium.
Seth: The second third shows some transitioning, and it opens with this creamy and nutty profile that has some pepper as well. There is this salty cashew cream with red pepper notes that is enjoyable. There are some cedar, hay and earth notes, and the finish has this soft honey profile. Like before, medium-full in strength and body.
John: Musty graham cracker, and mild baking spices lead the profile into the second third, with mild wood taking up the post draw. The post draw also takes on some mild dryness almost immediately. As the second third settles in., mild citrus is lost is in the general mustiness, occasionally peeking through. In the bottom half, the dryness on the post draw intensifies to medium strength.
Jiunn: The second third expands the flavor profile. There’s a black tea note to the already great cast of King’s Hawaiian bread, meatiness, dried nuts and encompassing white pepper spice. Strength and body remains medium-full and medium, respectively. 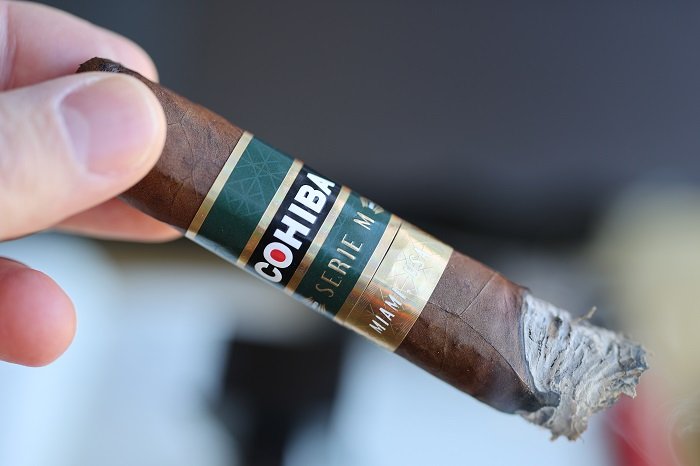 Aaron: As the final third begins, the profile turns harsh as the toast note becomes heavy, bitter char. At an inch in, the profile is charred, bitter cedar, dry earth with light black pepper and ashiness. The retrohale is heavily toasted wood and dry earth. The cigar maintains the same profile through to the end. The strength in this third bumped up to medium.
Seth: The final third delivers a profile of honey and sweet spices. There are some hay, cream and earth notes present as well, with touches of coffee and tobacco on the finish. Almost a return of the first third, but darker as well. Stronger coffee and earth notes. Strong medium-full third.
John: The last third opens with mild, musty graham cracker with mild bitter cedar to finish. Chocolate and mild espresso sit on the retrohale as it settles in. Some mild astringency and citrus join the post draw some time later. As the last third progresses, the astringency moves up to light plus in strength.
Jiunn: The final third continues to impress. Flavors are for the most part intact, still giving the full flavored experience of King’s Hawaiian bread, meatiness, dried nuts and encompassing white pepper spice. Strength is unchanged at medium-full and medium. 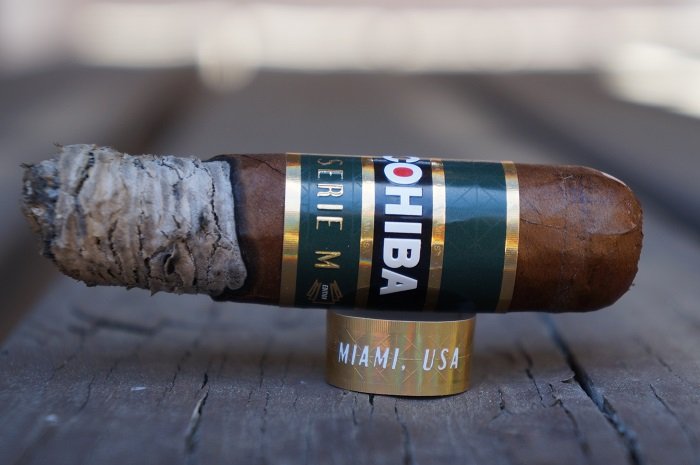 Aaron: The burn was a bit wavy at times, but self corrected. The cigar went out once, requiring a re-light. The ash held on in inch and a half increments.
Seth: Perfect burn throughout.
John: Two cigars were smoked for review and the burn performance was almost identical. Both cigars started out with a wavy burn, and a portion of the wrapper that wouldn’t burn. Both corrected, and became uneven in the second third, eventually requiring a single touch-up.
Jiunn: Burn performance was nearly perfect. Aside from a slightly uneven burn and hairline cracks on the fragile wrapper, burn was great. 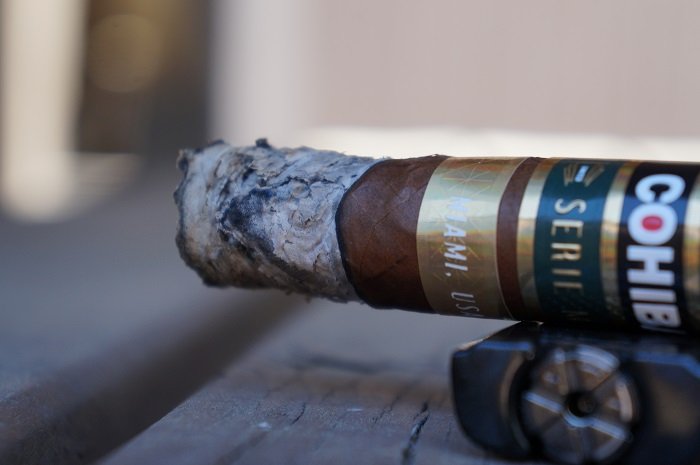 Aaron: The cigar had a pretty linear profile of toasted cedar, dry earth and black pepper until the final third when the toast transitioned to heavy, bitter char. Overall, the experience with the Cohiba Serie M was fairly forgettable as it never really captured my attention. The price point is quite high, especially for what I experienced and I don’t see myself returning to this cigar.
Seth: The Cohiba Serie M is the Cohiba I have been seeking for 10 plus years. This is almost a continuation of the old-school, and good La Palina Goldie offerings, but with a twist. The cigar delivered those amazing El Titan flavors, and it showed beautiful harmony between Nicaraguan and Dominican tobacco. There was complexity, depth and transitioning throughout. Construction was fantastic. Packaging was amazing. Great cigar!
John: The Cohiba Serie M was an enjoyable cigar, with balanced and at times both intense and nuanced flavors that kept me interested through the entire smoking experience. What I was impressed by was how consistent the flavors were between the two cigars. I would describe the overall impression of the profile as ‘Dominican-esque’. I think if you’re a big fan of the flavor profile of many Dominican cigars, you might fall in love with this cigar. I would look forward to smoking another Serie M if I had one available. Construction and draw were quite good, although at this price point I think it’s reasonable that the expectation for both should be a flawless rating. Total smoking time for the first cigar was 2 hours and 27 minutes, and 1 hour and 53 minutes for the second cigar.
Jiunn: I complained for so many years, stating Cohibas are disappointing and not worth the higher price points. I even went as far as to say, for all the swinging power that STG has, I don’t understand how they can’t make a solid blend and showcase great tobacco. Well, I’ll eat my words and will stop my bitching because it finally happened with the Serie M. Fellow true cigar geeks out there, pony up the money and try this. I get it, it’s not cheap, but STG finally got my point.