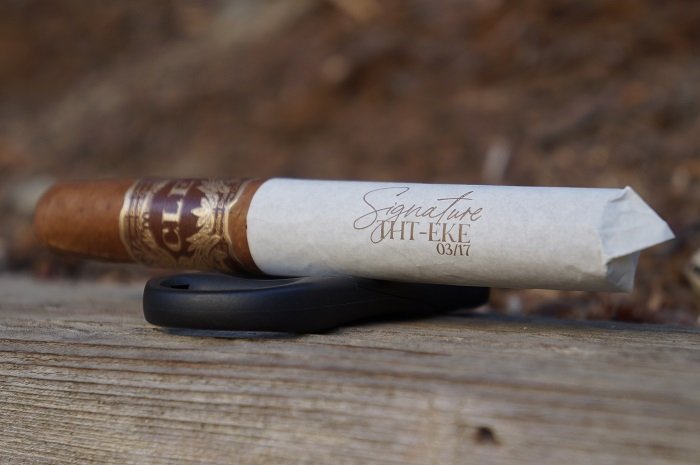 Aaron: The wrapper on the CLE Signature THT-EKE 03/17 TAA 11/18 is light brown and has a network of raised, knotty veins that carry a lighter color to them. The seams are extremely smooth and the caps are well applied. The band is brown and gold and carries the brand name. From just below the band is a white tissue sleeve that denotes the line name. The aroma from the wrapper is pretty light, but brings sweet cedar. The foot brings a full and very musty cedar. The pre-light draw brings more musty cedar.
Seth: There comes a point where these special vitolas need to become special again. I feel like I am smoking an 11/18 by CLE every other week now. Enough already. With that being said, amazing aroma. The CLE Signature THT-EKE 03/17 TAA 11/18 had an aroma on the foot and wrapper of the Cigars International downtown store in Bethlehem, PA that I use to shop at in my youth. Medium veined cigar with noticeable veins in texture. Coloring is that of light Colorado. Light reddish clay.
John: The CLE Signature THT-EKE 03/17 TAA 11/18 has tissue paper, along with a UPC sticker covering just over half the cigar. The cigar has a single main band. Aromas from the wrapper included a sharp wood, along with baking spices. From the foot, I could discern light wood and hay.
Jiunn: First of all, the shape of the CLE Signature THT-EKE 03/17 TAA 11/18 is obviously wicked awesome. The naming convention… perhaps not so much. The wrapper consists of a uniform Colorado Claro, veins relatively well pressed, seams tight, bunch and roll even amd head well wrapped. Aromas from the wrapper tell faint hay and flower perfume. Aromas from the foot tell heavier notes of white pepper and amplified cedar. Cold draw gives cedar and hay. 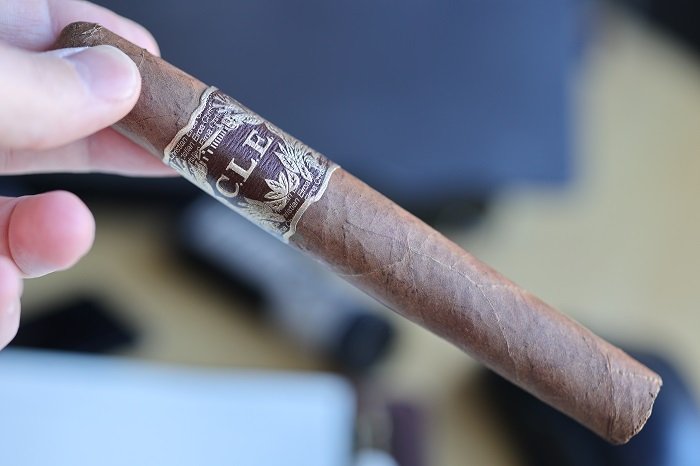 Aaron: The cigar begins with a mix of lightly toasted cedar and leather. At half an inch in, a mild black pepper joins the profile. The retrohale is a mirror image of the mouth draws. At an inch in, a light mustiness joins the profile. As the third comes to a close, the profile is pretty mellow with a mix of lightly toasted and musty cedar, leather and a mild black pepper. The strength is slightly below medium.
Seth: The first third has a lovely beginning. I am picking up hay and cream notes, and they are paired with this dry earth quality. I am picking up some herbal spices with that, and the finish is that of leather. Medium in strength and body. Very approachable.
John: The first few puffs consist of sweet bread and mild wood. The bread and wood combine through the post draw. Some light bakers chocolate develops on the retrohale as the first third continues. Not long after, mild baking spices also develop. Musty notes join the center of the profile as the first third continues to evolve. By the 10 minute mark, sour citrus has also joined the flavor medley. Wood drives the profile by the 15 minute mark, with some mild tannins.
Jiunn: The first third has a mishmash of un-unified flavors. The cigar is all over the place with cedar, floral star jasmine, dry red pepper spice, minerals and an odd creamy milk mixture that tastes incredibly synthetic. Strength and body is medium. 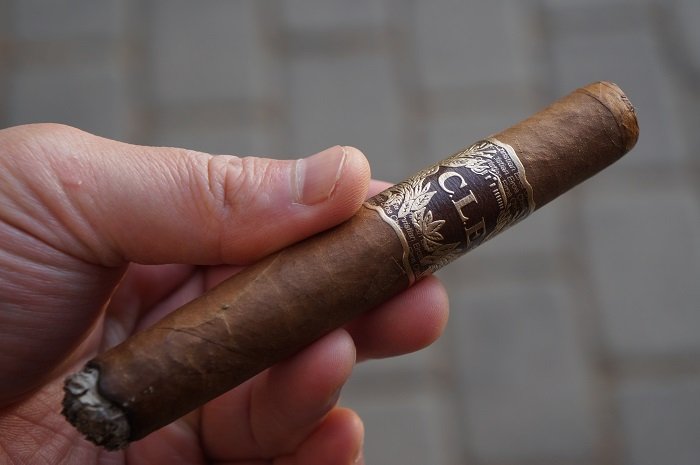 Aaron: As the second third begins, the body picks up a good amount. At a half inch in, the toast level has increased and the pepper has a sharpness to it. The retrohale is musty, toasted cedar, leather and mild black pepper. At an inch and a quarter, the leather drops from the profile. The third wraps up with musty, toasted cedar along with mild black pepper. The strength bumped up to medium.
Seth: The second third showed some transitioning, and I was picking up some hay, cream and nutty qualities. There were faint spice and earth notes as well, and the cigar smoked at a medium to medium-full level.
John: Wood and spices take the cigar into the second third. Faint chocolate is present through the retrohale. Citrus and wood carry into the post draw. The wood has some mild dryness to it, and some acrid components, building through the center of the profile. As the second third continues, the acrid notes fall off and are replaced with sharp tannins. After the re-light and purge, baking spices come through. Tannic wood lingers between draws as the second third progresses.
Jiunn: The second third flavor profile shifts to showing more minerals and oily/buttery synthetic milk. It’s a bit tough for me to exactly ID the odd oiliness, but it tastes a bit like plastic as well. The note carries on seemingly forever on the finish. Strength and body remains medium. 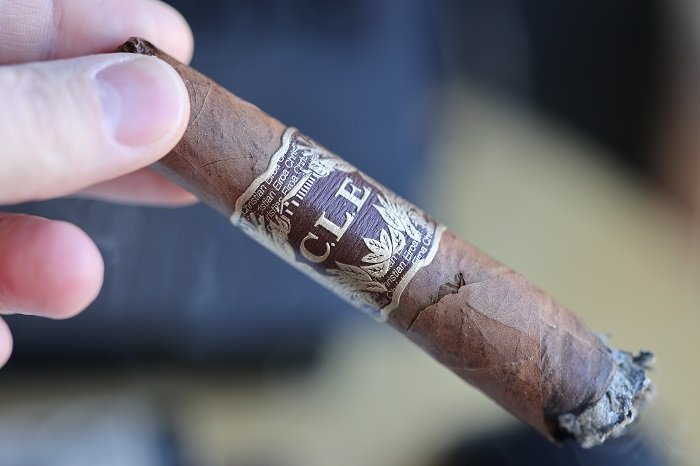 Aaron: As the final third begins, some dry earth joins the profile. The retrohale is musty, toasted cedar with light dry earth and black pepper. The cigar wraps up with the toast becoming fairly heavy with the dry earth and black pepper in the background. The strength remained at medium.
Seth: The final third delivers a creamy and nutty profile. There are spice, pepper, leather and earth notes present as well. Not much beyond that. There was a step up from the second third in terms of strength and body, and I would classify the cigar as medium-full.
John: The last third is toasted wood, with tannic wood sitting on my tongue between draws. There is no other evolution through the last third.
Jiunn: The final third is still giving me that oily/buttery texture that tastes like a mixture of minerals, plastic and milk. Well, there’s a sentence about a cigar I never thought I’d say. Strength and body finish the same medium. 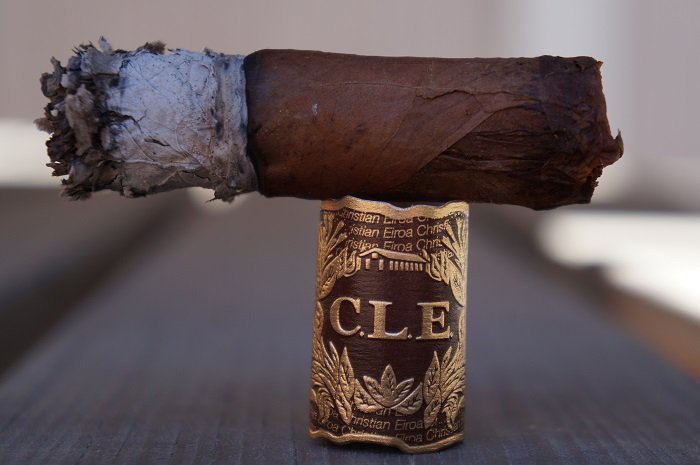 Aaron: The burn was off from the start, with a re-light about a half inch in and then a touch-up required in each third.
Seth: Great burn throughout.
John: There were significant burn issues right out of the gate, as the cigar was fighting me to stay lit with every puff. The cigar went out and required re-lights in the bottom of the first third, the halfway point and the last third. Additionally, a crack developed at the halfway mark of the cigar, which may indicate that it was dropped at some point between rolling and when I reviewed it.
Jiunn: Burn performance was just short of being flawless. The cigar went out randomly during the second third. Aside from that, all else was perfect. 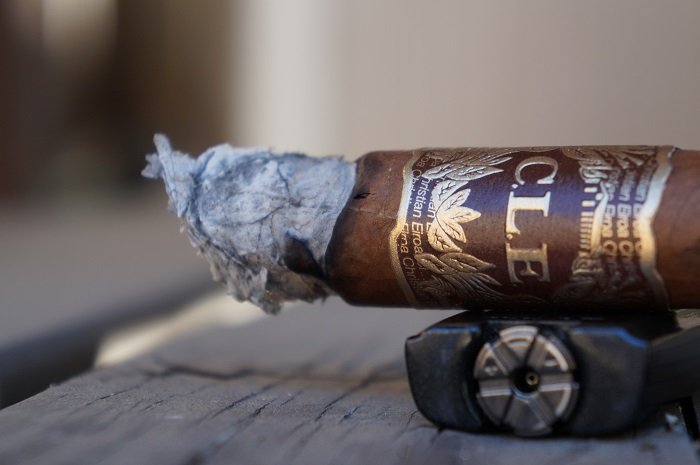 Aaron: The draw started a little loose and then fell in line with right where I wanted it.
Seth: Great draw from start to finish.
John: The draw was perfect, right in the center of the ideal zone of resistant and open.
Jiunn: The ideal draw, giving the best air flow and resistance.

Aaron: Things started with a bit of frustration as the cap cracked from the head down to the band as soon as I cut it. There was also a very early re-light required. Aside from that, the body was light through the first third before it picked up in the second third. The flavor profile was focused around toasted, musty cedar, leather, dry earth and black pepper. The CLE Signature THT-EKE 03/17 TAA 11/18 flavor profile was average overall and the burn issues just caused some disappointment throughout. A bit of a bummer of an experience, so I’m interested to see how it fared for the others, which will determine if my experience was a one off or something that’s more indicative of the cigar as a whole.
Seth: The CLE Signature THT-EKE 03/17 TAA 11/18 is wonderfully average and overpriced. Congratulations on all your success TAA. “THT-EKE 03/17?” I don’t know that Cuban box code from March 2017.
John: I can’t say definitively whether the repeated re-lights on the CLE Signature THT-EKE 03/17 TAA 11/18 impacted the flavor profile, but it has been my experience that a poor burn always has consequences. The flavor profile never seemed to liftoff and develop into something cohesive, even if it was interesting at points through the first third. At such a premium price point, the overall flavor experience coupled with poor burn performance was a subpar experience for me. I would be willing to smoke another THT-EKE 03/17 TAA 11/18, but only if it was on someone else’s dime. Total smoking time was 2 hours exactly.
Jiunn: I typically wouldn’t say this about a cigar I felt was overall average tasting, but I actually do want to smoke this CLE Signature THT-EKE 03/17 TAA 11/18 again in a few months. The oddities of flavors both intrigues me and annoys me, because I rarely taste a cigar that’s this much of an odd ball that I cannot definitively identify the flavors. But then again, do I want to do this for $18? That’s a tough one.