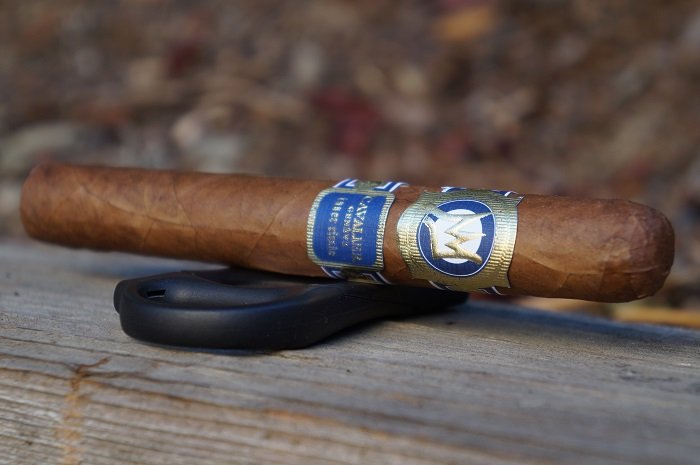 Aaron: The wrapper on the Cavalier Genève Inner Circle Toro is light brown, with some darker marbling and some raised veins present. The seams are a bit raised and the caps are well applied. There are two bands, both carrying a gold, blue and white color combination. The primary band has the logo for the line with the company and line name on the sides. The secondary band shows the company and line name on the front, which is a bit hard to read with the way the gold lettering is printed. The aroma from the wrapper is faint wood, while the foot brings a mix of wood and faint earth. The pre-light draw brings a lightly sweet and airy cedar.
Seth: A lovely cigar that is finished with beautiful bands. The cigar itself is rough in texture and finished with small to medium sized veins throughout. The coloring is that of solid Colorado, and the Cavalier Genève Inner Circle Toro has some soft spots throughout. Aromas of tobacco, leather, herbs and dry wood. Sweet spices present as well.
John: The Cavalier Genève Inner Circle Toro does not come in cellophane, and does not have a UPC code or sticker. On closer examination, I see the UPC sticker is integrated into the secondary band, which is quite well designed. The cigar is double banded with an ‘Inner Circle’ primary band of gold on blue, on white, and a secondary band of ‘Cavalier Genève Inner Circle’. The aromas from the wrapper included spicy cedar and not much else. From the foot, I was getting faint floral, wood and hay.
Jiunn: The Cavalier Genève Inner Circle Toro has an even Colorado wrapper shade showing nice oils. Veins are well pressed, seams tight, bunch and roll shows minor divots and head is well wrapped and capped. Wrapper aroma tells bountiful natural nutty sweetness with cocoa undertones. Foot aromas give cedar, hay and nutty sweetness. Cold draw provides the same flavors as the foot aromas. 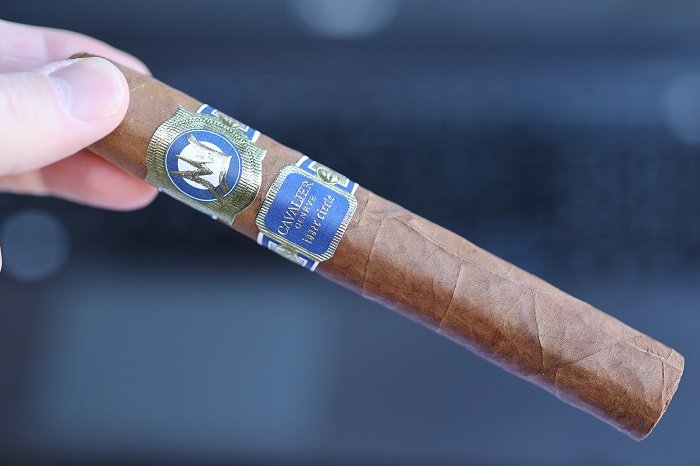 Aaron: The cigar begins with toasted cedar up front, black pepper in the middle and light earth in the background. At a half inch in, the components are well integrated. The retrohale is toasted cedar with a light black pepper zing. At an inch and a quarter, a light mustiness joins in. As the third comes to a close, the profile is toasted cedar up front with black pepper a fair bit behind and earth and mustiness in the background. The strength was slightly below medium.
Seth: The first third starts out with bits of leather, herbs, floral qualities, cedar and hay. Medium in strength and body.
John: The first third gets going with medium strength spicy wood. Some sweetness is present underneath, as sweet wood and hay defines the post draw. Light plus strength, but medium bodied to open up as it settles in. Some powdered cocoa comes through not longer after, and has an accenting notes of minor chalkiness.
Jiunn: The first third shows good harmony and is very approachable. Balanced flavors of cedar, nutty and sweet roasted mixed nuts and a hint of vanilla. Retrohaling introduces subtle dried red pepper spice and further accentuates the cedar and roasted nuttiness. The finish is clean, with a soft lingering cedar. Strength and body is medium. 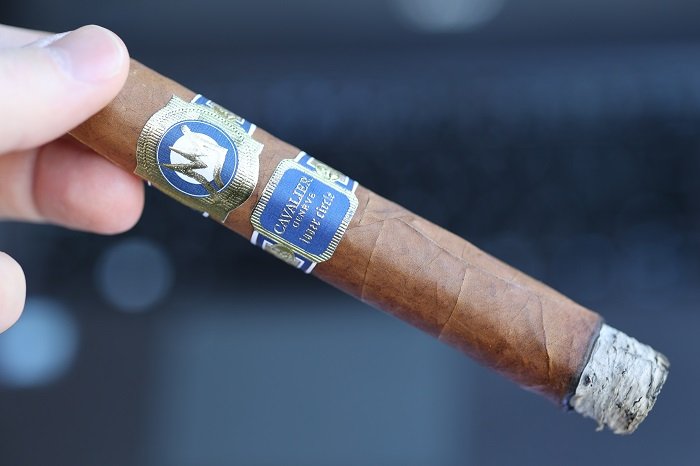 Aaron: As the second third begins, the toasted cedar gains a staleness and the earth increases a bit. At three quarters of an inch in, some light wood bitterness has joined in. The retrohale is now toasted cedar and earth with a lightly zingy black pepper. At an inch and a half in, the earth is now even up front with the toasted and stale cedar. At an inch and three quarters, the wood bitterness increases a bit. The strength remained at slightly below medium.
Seth: The second third is similar to that of the first third. I was picking up some herbs, floral qualtiies, cedar and hay. Medium in strength and body. Lighter than the first third.
John: Medium spices lead off again here in the second third, with some mildly chalky chocolate, earth and dry wood to round out the flavors. The spices, wood and earth start to linger into the post draw, with the chalk again offsetting the chocolate.
Jiunn: The core flavor profile remains on the second third. The only change is the dried red pepper spice and cedar becomes bolder, taking a bigger footprint through mouth draws and retrohales. Strength and body remains medium. 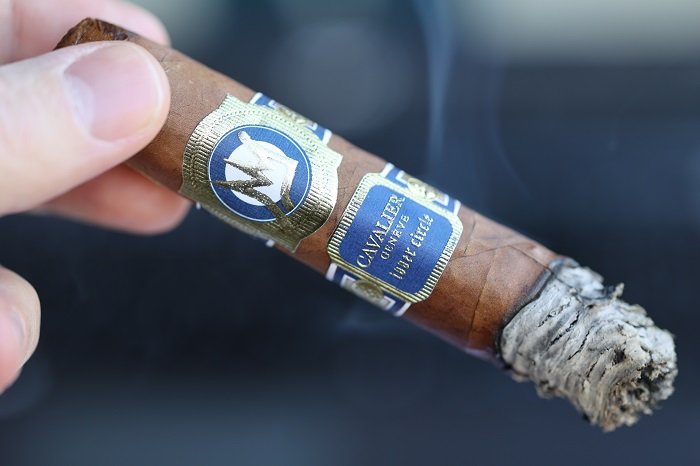 Aaron: As the final third begins, the wood bitterness has continued to increase. At a half inch in, the wood bitterness mellows to the background. The retrohale is now toasted cedar and dry earth. As the cigar wraps up, the musty, toasted cedar is up front, with earth right behind and black pepper and wood bitterness in the background. The strength bumped up to medium.
Seth: The final third was a lighter version of the second third. Not bad, but lacking. Leather, floral qualities, herbs and wood. Just below medium in strength and body.
John: The profile starts out similar to the previous two thirds, spices, chocolate, dry wood and earth, along with some vegetal notes. Wood moves into the middle of the profile as it settles, and the flavors become muted as the last third continues.
Jiunn: The final third takes the complexities down a notch. The flavor profile has reduced to primarily dried red pepper spice and cedar. Strength and body finishes the same medium. 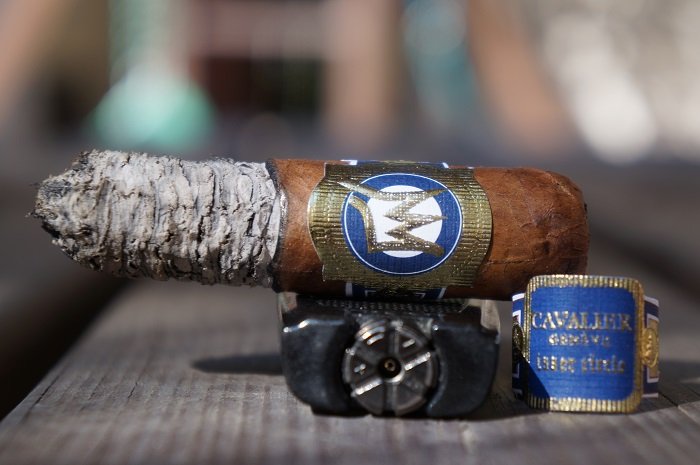 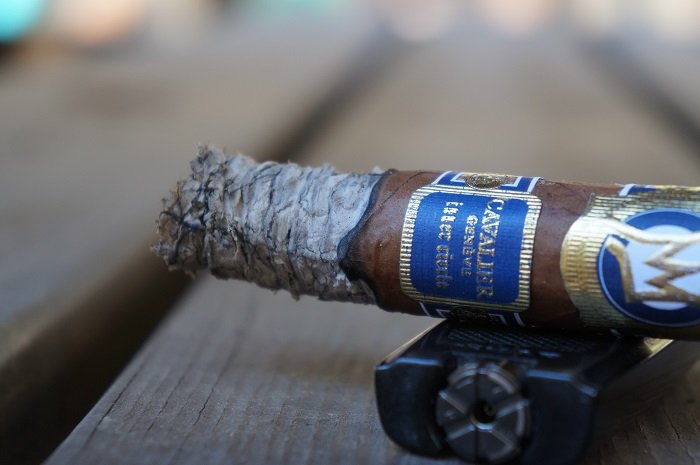 Aaron: The draw was perfect, with just the right amount of resistance that I prefer.
Seth: Draw was average throughout. Sometimes, too loose.
John: The draw was at most a half notch towards the resistant spectrum, putting it in the ideal range for a perfect draw.
Jiunn: The draw was also perfect, giving the ideal air flow and resistance.

Aaron: The cigar began with toasted cedar up front, black pepper in the middle and light earth in the background. A light mustiness joined a bit later. The second third saw the cedar gain a stale note and some wood bitterness joined in a bit later. The final third saw the bitterness increase for a bit and then retreat to the background. Construction was absolutely perfect. The Cavalier Genève Inner Circle Toro started well, with a nice combination of flavors and then dropped down once the wood bitterness joined in. The final third saw a return to good for the last half of it, but wasn’t enough to dodge the bitterness from the first half of that third. This is a pretty good blend, but the wood bitterness that built up from the second third to the middle of the final third, took a bit of a toll on the overall enjoyment. If the bitterness could age out, this would be a pretty good cigar, and I may revisit it to see if that’s the case.
Seth: This Cavalier Genève Inner Circle Toro was an average cigar that had a flavor profile that was pleasant, but overall lacking. It had some qualities of non-Cuban blends for the European market, but it was lacking in that sense because there was not enough flavor. That doesn’t mean it was an American blend, because this was too lacking for what I would consider an American blend. I felt the blend was an attempt to create an elegent blend that would do well with Europeans and seasoned American cigar smokers.
John: The Cavalier Genève Inner Circle Toro delivered balanced and complimentary flavors through the review experience. The last third didn’t quite manage to maintain the same level of engagement as the rest of the cigar, but overall a good experience. The burn was slightly wavy through much of the review, but never required intervention. The draw was perfect. I would happily smoke another Inner Circle Toro again. Total smoking time was 2 hours and 5 minutes.
Jiunn: The Cavalier Genève Inner Circle Toro is both very approachable and a nuanced connoisseur’s blend. New cigar smokers will enjoy the easy going nature of the cigar, while seasoned cigar smokers will find subtleties and balance. Given how all Cavalier Genève offerings are so approachable, this one takes it to the next level. Nicely done.