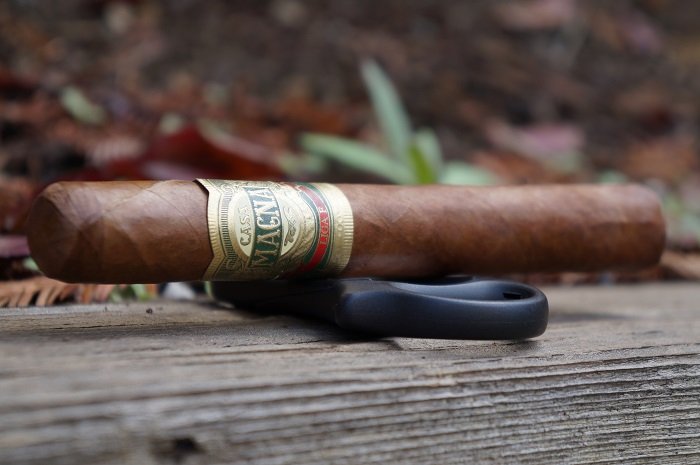 Aaron: The wrapper on the Casa Magna Liga F Toro is a marbled medium brown and has a few decently raised veins present. The seams are a bit raised while the caps are applied well. The band is the traditional design for the brand, but carries a green, gold and red color combination and denotes Liga F. The aroma from the wrapper is musty wood, while the foot brings wood and stone fruit sweetness. The pre-light draw brings musty, aged cedar and stone fruit sweetness along with a mild spiciness on my lips.
Seth: The Casa Magna Liga F Toro is lovely in appearance. The wrapper has a wonderful dark Colorado coloring, and it is smooth and somewhat oily throughout. There are medium sized veins throughout, and they bring this darker coloring to the wrapper. The foot is giving off notes of pepper, sharp spices, leather and earth. The wrapper is giving off tobacco, leather and wood notes.
John: The Casa Magna Liga F Toro comes in cellophane, with a UPC sticker attached to the main body so the cellophane can be opened without tearing the UPC sticker. The cigar itself is single banded. For aromas, I was picking up on chocolate, bread and wood. Similar aromas were present from the foot, including the addition of raisin and sweet tobacco.
Jiunn: The Casa Magna Liga F Toro has a gorgeous, even, shiny, near Colorado Maduro wrapper shade. Veins are well pressed, seams tight, bunch and roll even and head well wrapped. Aromas from the wrapper tell deep, rich, roasted nuttiness and barnyard. Aromas from the foot gives plums, cedar and that same roasted nuttiness. Cold draw reveals nuts, cedar and hay. 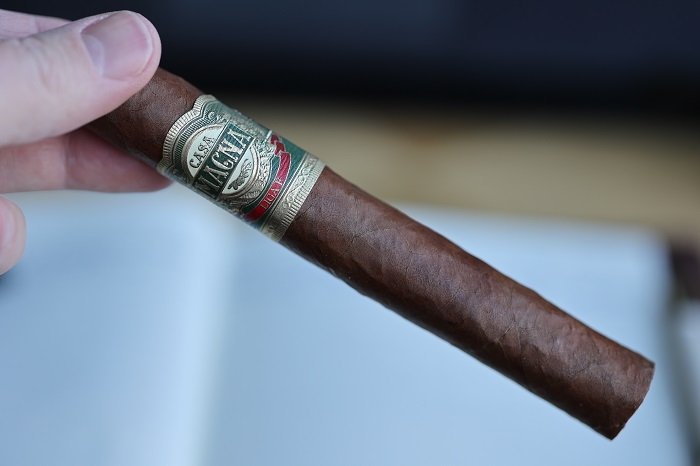 Aaron: The cigar begins with spicy, toasted cedar and mustiness. At a quarter inch in, the spice is now more of a black pepper that isn’t attached to the cedar. At an inch in, the profile is musty, toasted cedar up front with black pepper right behind. The retrohale is toasted cedar with light mustiness. At an inch and a half in, the black pepper has become a bit dull but hasn’t lost its fullness. The strength in this third was slightly above medium.
Seth: The cigar starts out with this lovely leather, rosemary and pine flavor profile. I am picking up some nut qualities as well, and the finish has some black pepper and dry earth. Medium in strength and body.
John: Through the first few puffs I was tasting bread, baking spices and a dry wood to finish. Some medium lingering pepper and earth join the post draw as the first third progresses. Some time later, sweetness joins the finish. Not longer after, some chocolate and mild minerality move into the middle of the profile.
Jiunn: A unique profile. The effervescence is super unique. Compound this note with nuts, bread, assertive baking spices, minor burning cardboard and I got myself a “I think I like it? Do I?” perspective. Strength and body is medium. 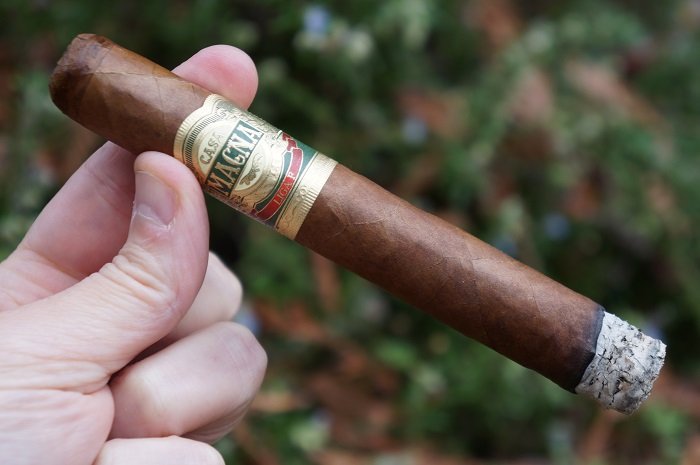 Aaron: As the second third begins, the toast level increases and a faint creaminess joins the profile, but the overall profile is now slightly dry. At a half inch in, the musty, toasted cedar is up front with dull black pepper a bit further behind now while the light creaminess has departed. The retrohale is now just musty, toasted cedar. As the third comes to a close, the musty, toasted cedar remains up front while the dull black pepper is still a bit behind. The strength remains at slightly above medium.
Seth: The second third delivers this leather profile that is accompanied by earth, herbs and pepper qualities. It has that rosemary and green quality on the finish, and it is smoking at a medium to medium-full level in strength and body.
John: Cocoa and a mild earth and wood combination take the Liga F Toro into the second third. A combination of baking spices and wood, both at medium strength, start to define the finish. As it progresses, sweetness is joining the finish and serves to balance it out. Earth moves into the middle of the profile at medium strength some time later. By the middle of the third, the earth has joined the post draw as well.
Jiunn: I’m definitely no longer debating if I like it or not. The second third builds near overwhelming minerals, nuts become stale and burning cardboard intensifies. The best part is the retrohale because I don’t taste the staleness and high concentration of minerals. Strength and body remains medium. 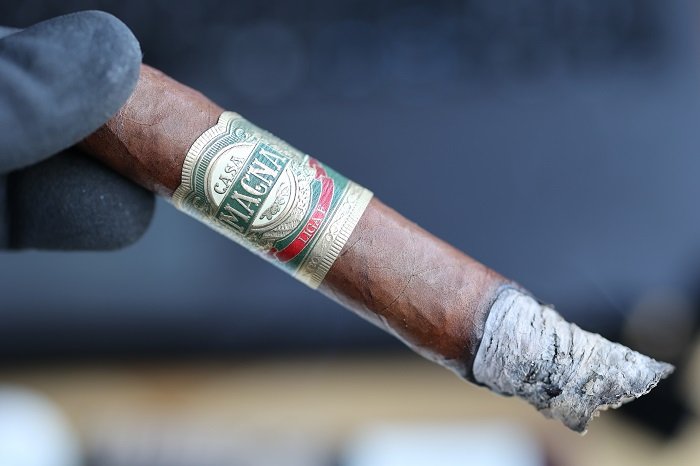 Aaron: As the final third begins, the toast level has become pretty heavy. At a half inch in, the cedar is starting to show a slightly young note. The retrohale remains musty, toasted cedar. The cigar wraps up with musty, heavily toasted, slightly young cedar with the dull black pepper a bit behind. The strength in this third bumped up to medium-full.
Seth: The final third delivers that leather, earth, pepper and herbal profile from the second third, but there were some mineral qualities on the finish that overpowered some of the other flavors. It became earth and mineral focused quickly in the end. Medium-full in strength and body.
John: The last third combines bread, earth and an earth and wood finish. Dry wood almost immediately takes hold in the post draw. As the last third settles in, a mildly charred earth defines the middle of the profile. By the halfway point, chocolate has returned to the retrohale.
Jiunn: The last third has no changes. Still overwhelming minerals, stale burning cardboard galore. Strength and body remains medium. 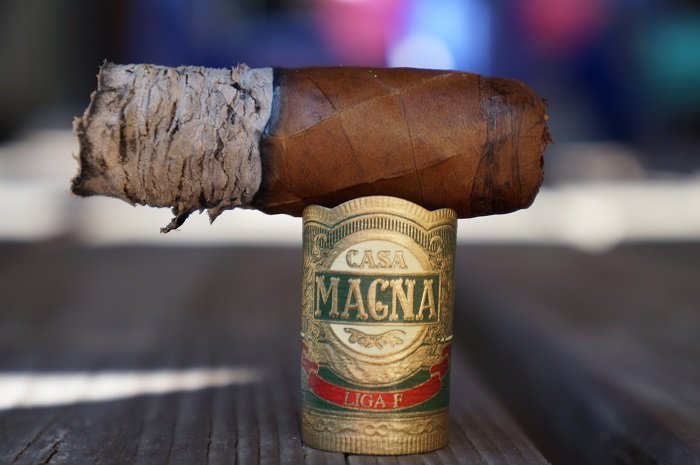 Aaron: The burn was slightly wavy at times, but the cigar did go out three times, requiring re-lights.
Seth: Burn was solid throughout. Not perfect.
John: The burn started out straight, but struggled to stay lit in the first third. It eventually went out, requiring a re-light. A mild canoe developing in the second third, correcting itself without intervention. The ash held on well, up to 1-1/2 inches at the longest point.
Jiunn: Perfect burn performance. Even burn, solid ashes, cool burning temperature and ample smoke production. 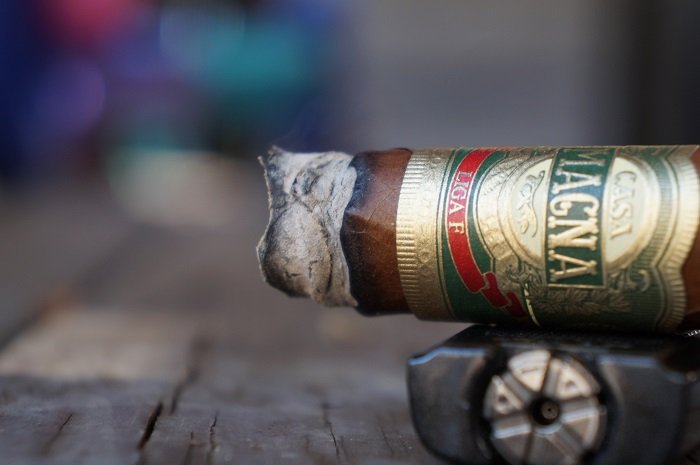 Aaron: The cigar began with spicy, toasted cedar and mustiness with the spiciness moving off the cedar and becoming black pepper fairly quickly. The profile really maintained this same combination through the rest of the cigar. The cigar going out three times was a bit of a bummer. Overall, the Casa Magna Liga F Toro was fairly average throughout as it was a basic flavor profile with no real transitions. I think the cigar did live up to its billing of being a bit of a stronger strength profile, but the flavor profile didn’t do anything to elevate the cigar. The price point works for the cigar, but I don’t see it as something I look forward to coming back to.
Seth: I enjoyed this Casa Magna Liga F Toro. I thought the flavor profile was on point in the first and second third, but it was Dominican. There may be some Nicaraguan tobacco in the blend, but this is a Dominican cigar. Great pricing. I am interested in trying other sizes. I can’t compare it to the other Casa Magnas, probably because it has been so long since I smoked a Casa Magna, but I was pleased with so many aspects of this cigar.
John: The Casa Magna Liga F Toro served up some engaging flavor combinations in the first third. Similar flavors were present in the second third, but they didn’t quite harmonize as effectively as the first third. The last third was largely earth and wood focused. Overall, the cigar was average, but something I might return to in the future. The draw had a mild amount of resistance to it, and the cigar went out once, requiring a re-light. Total smoking time was 2 hours and 7 minutes.
Jiunn: Unfortunately, the Casa Magna Liga F Toro was not my jam. Too much minerals, stale nuts and burning cardboard paper. These notes individually are bad enough, but combine them together and it gets that much worse. Good price point for such a beautiful pre-light experience, but the smoking part of it didn’t do it for me at all.