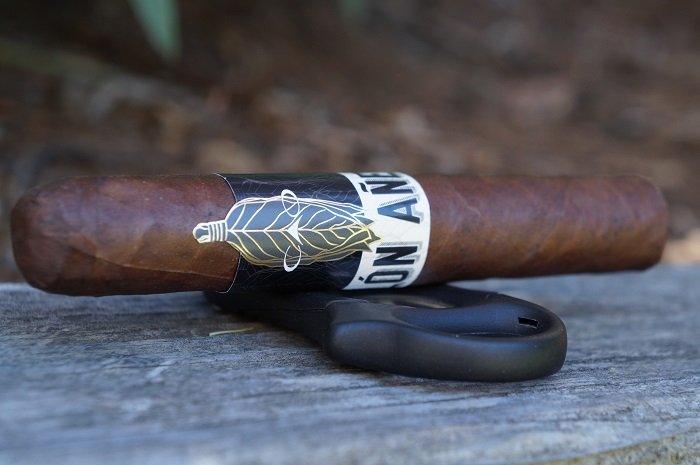 Aaron: The wrapper on the CAO Pilón Añejo Robusto is dark brown and has a couple of decently raised veins present. The seams are smooth and the caps well applied. The band is black, white and gold with the brand name over a hand of tobacco and the line name below it. The aroma from the wrapper is stone fruit sweetness and hay while the foot brings a very sweet cedar and mild baking spice. The pre-light draw brings lightly sweet cedar and mild baking spice along with a mild spiciness on my lips.
Seth: The CAO Pilón Añejo Robusto is a solid Colorado Maduro, and it has nice marbling throughout. With small veins present, it has this raisin like quality and coloring without the purple qualities. Firm in hand, the cigar is rolled well and gives off aromas of sweet earth, floral arrangements, cocoa and leather.
John: The CAO Pilón Añejo Robusto comes in cellophane, and does not have a UPC sticker. The main band is medium sized, taking up roughly a third of the length. Aromas from the wrapper included sweet raisin, tobacco, and mild cedar underneath. From the foot, there was mild, sweet tobacco and dry wood.
Jiunn: The CAO Pilón Añejo Robusto has a semi-glossy and blotchy Colorado maduro wrapper color. Veins are well pressed, seams tight, bunch and roll even and head well finished. Aromas from the wrapper tell of plentiful barnyard, hay and cedar. Aromas from the foot give a burst of white pepper spice and cedar. Cold draw reveals namely hay and barnyard. 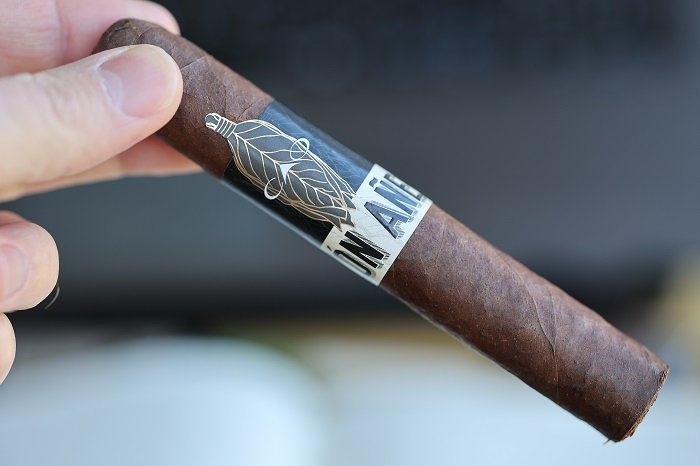 Aaron: The cigar begins with lightly toasted cedar and baking spice. At a quarter inch in, some earth joins the profile. The retrohale brings a fuller version of the toasted cedar, baking spice and earth combination. At an inch in, a light mustiness joins the profile. At an inch and a quarter, a light chalkiness appears. As the third comes to a close, the profile is toasted cedar up front with earth and baking spice a bit behind and light amounts of mustiness and chalkiness in the background. The strength was right at medium.
Seth: The first third starts out with some popcorn and damp wood qualities. Bits of cocoa, leather and floral qualities as well. Soft sweetness with some herbal qualities too. Medium in strength and body.
John: The first few puffs were flavors of earth, dark chocolate and espresso. Some sweet coffee and pepper linger into the post draw as it progresses. The earth rapidly becomes the main flavor driver in the profile. Some minerality joins the earth with a mildly bitter component accenting the coffee. Sweetness pushes through the middle of the retrohale as it moves towards the halfway point. In the bottom half, wood moves to the front of the profile, replacing the earth.
Jiunn: The first third gives main flavors of chalky cocoa and cedar. On the retrohale, spice is realized, bringing a nice dry red pepper, as well as elevated cedar. The finish has the chalkiness of the cocoa most evident, as it’s very drawn out. Strength and body is medium. 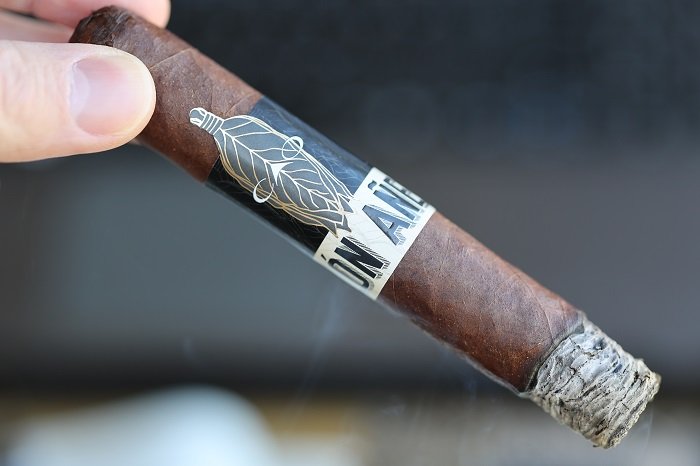 Aaron: As the second third begins, the baking spice, mustiness and chalkiness all pickup a bit. At a half inch in, the toast level increases. The retrohale remains toasted cedar, earth and baking spice. As the third comes to a close, the cigar has maintained the profile of toasted cedar up front, earth and baking spice just behind and mustiness and chalkiness just behind that. The strength remained at medium.
Seth: The second third continues to deliver those damp wood notes and they are paired with some cocoa, leather, floral and herbal qualities. Earthy as well. Like before, medium in strength and body.
John: The second third leads off with dry wood, earth, mild espresso and a medium to medium-full dry wood into the post draw. Sweetness returns to the middle of the retrohale as the second third settles in. Earth and minerality start to define the post draw as the second third continues. The sweetness becomes more defined as tobacco sweetness. Baking spices are coming through, with nutmeg as a standout note, moving to the halfway point. Dry wood is driving the post draw at the halfway point at medium-minus strength, lingering between each draw.
Jiunn: A couple notable changes within the second third. First, the cocoa is gone. This leaves me with the same overall chalky flavor/body with cedar and dry red pepper spice through the nostrils. Second, the body becomes fuller, almost reaching medium plus (strength still medium). 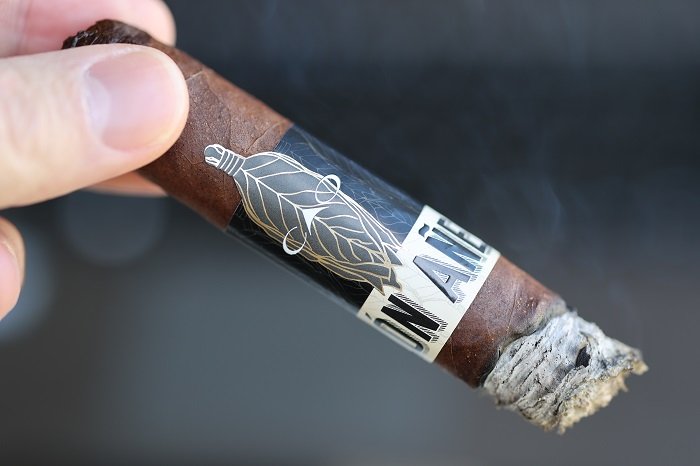 Aaron: As the final third begins, the toast level increases a bit more, bringing along a light wood bitterness. At a quarter inch in, the earth becomes a bit dry and is now even with the toasted cedar up front. At a half inch in, the baking spice mellows a fair amount. The retrohale is now toasted cedar, dry earth and mustiness. As the cigar wraps up, the profile is toasted cedar and dry earth up front with mustiness just behind and baking spice and chalkiness in the background. The strength bumped up to slightly above medium.
Seth: The final third delivers a profile of damp and dry wood with some faint cocoa notes. Lots of earth present as well, with some mineral notes here and there. Medium in strength and body.
John: Dry wood leads off here, with sweet wood in the middle and tannic dry wood into the post draw. By the time it has settled in, dry, tannic wood defines the profile.
Jiunn: The final third overall mimics the second third. Chalk, cocoa and dry red pepper spice through retrohaling. There is some intermittent waves of dry soil. Strength and body is still overall medium. 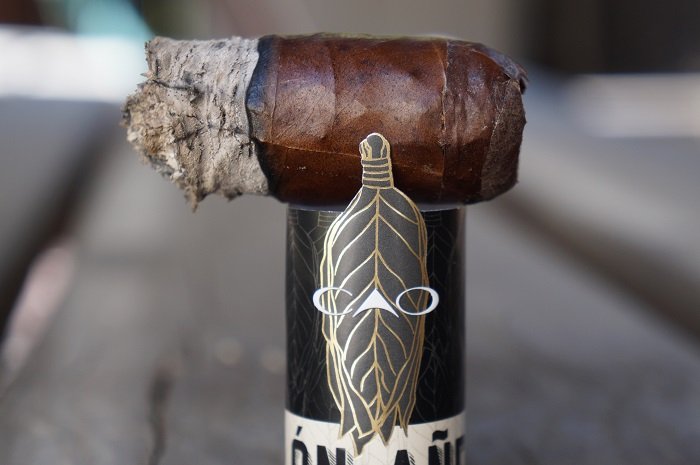 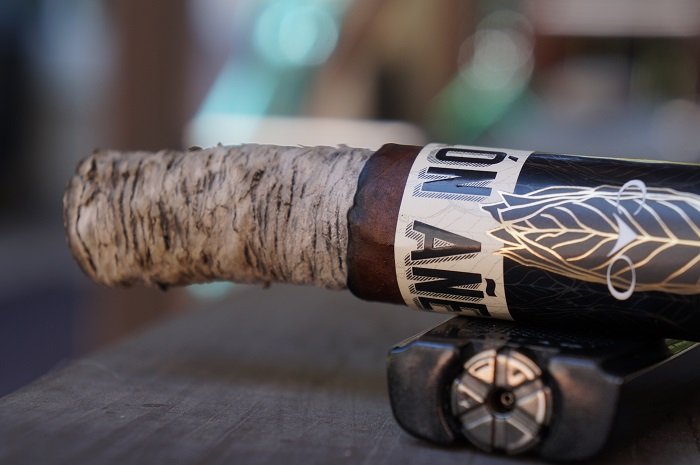 Aaron: The draw was perfect, with just the right amount of resistance that I prefer.
Seth: Perfect draw.
John: The draw started quite resistant and remained that way for the review. The draw was roughly 3-1/2 to 4 notches into the resistant spectrum.
Jiunn: Flawless draw, striking the ideal balance between air flow and resistance.

Aaron: The cigar began with lightly toasted cedar and baking spice. Some earth joined in fairly quickly and some chalkiness a bit later. The cigar maintained these components the rest of the way, with just changes to the fullness of them up and down. The construction was absolutely perfect. The CAO Pilón Añejo Robusto had an average flavor profile throughout, with nothing really exciting going on. There was some transitioning of the components, but it didn’t add to the overall enjoyment. I think the original Pilon was a step above this offering and that would be the cigar I’d go for over this one. I don’t really see myself coming back to this cigar.
Seth: I don’t know what I am doing here, but I dug this CAO Pilón Añejo Robusto! Some cool flavors here and there with a solid core of cocoa, leather, floral and herbal qualities. Great construction! Final third was not as good as the first two thirds, but overall, I thought this was a good cigar. Could have been great!
John: The natural comparison on the CAO Pilón Añejo Robusto is going to be with the original release, and for me they couldn’t be more different cigars. The original CAO Pilón had levels of nuance and subtlety, while the Pilón Añejo Robusto was mostly wood and earth driven, with wood becoming the main flavor driver by the halfway point. For me, the CAO Pilón Añejo Robusto lacked any sort of dynamic flavor profile that would engage me to come back for a second pass. The burn was perfect and the draw had quite a lot of resistance to it. Total smoking time was 1 hour and 30 minutes on the nose.
Jiunn: I’m happy to see the return of Pilon. Is it proper to call it Anejo? I believe so, as the profile showed zero characteristics of young, harsh tobacco. I wish the chalky cocoa was more consistent throughout, but I don’t necessarily fault it, as the overall experience was consistently respectable.