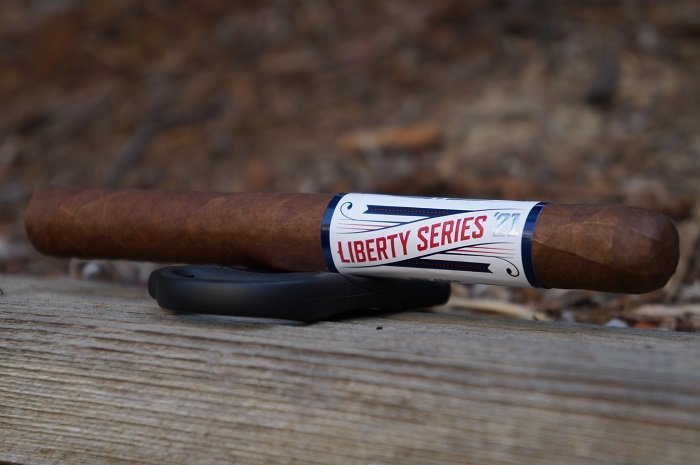 Aaron: The wrapper on the Camacho Liberty 2021 is a marbled medium brown while the network of moderately raised veins carry a slightly lighter color around them. The seams are very smooth and the head has a top cap that is lifting in a few areas. The band is red, white, blue and silver and denotes the brand and line name. The aroma from the wrapper is wood with a light mustiness and sweetness. The foot brings wood and bran muffin. The pre-light draw brings sweet, aged cedar along with a mild spiciness on my lips.
Seth: The Camacho Liberty 2021 has a nice marbled brown wrapper, Colorado Maduro in coloring. There are small veins scattered throughout, and there is a nice firmness present as well. Aromas of strong and sweet spices, red pepper, earth and cream.
John: The Camacho Liberty 2021 has a large main band, and comes in cellophane, without a UPC sticker or code. For aromas, I could smell bread and cedar off the wrapper. From the foot, all I could pick out was mild, sweet tobacco.
Jiunn: The Camacho Liberty 2021 has a gorgeous oily natural leather shoe brown coloration. Veins are well pressed, seams tight, bunch and roll even and head well wrapped. Aromas from the wrapper tell of rich cedar, star jasmine and baking spices. Aromas from the foot give naturally sweet roasted nuts. Cold draw tells of hay, plums and cedar. 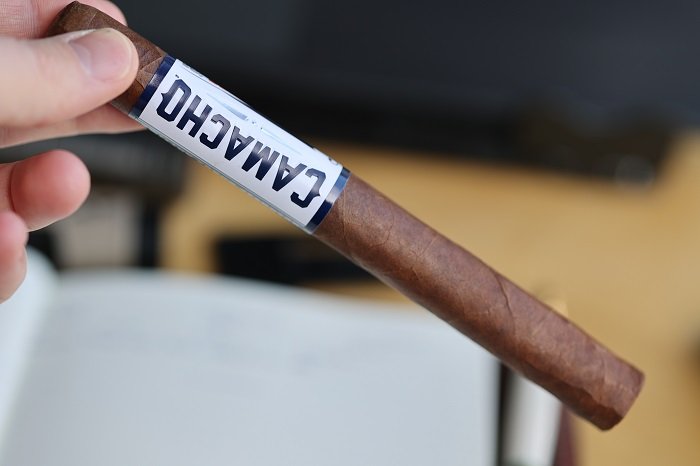 Aaron: The cigar begins with musty oak, dry earth and faint bitterness. At a quarter inch in, a mild baking spice joins the profile. At a half inch in, the oak gains a toastiness. The retrohale is lightly musty and toasted oak along with some dry earth. At an inch and a quarter, the profile has the lightly musty, toasted oak even with the dry earth with light baking spice and faint bitterness in the background. The overall profile is a bit dry. The profile maintains itself through to the end of the third. The strength was slightly below medium.
Seth: The first third delivers a profile of white pepper, lemon peel, grass cuttings and tobacco. It has a summery quality in terms of flavors, but there is this somewhat sharp mineral quality on the finish. I would classify the cigar as medium in terms of strength and body.
John: The first third starts with sweet cedar, and delaying baking spices that linger into the post draw. Creamy baking spices define the retrohale right away. Some citrus adds complexity to the retrohale as the first third progresses. Some time later, post draw cedar joins, bringing with it mild leather that both linger on the palate. Not long after, mild chocolate comes through on the retrohale. That chocolate builds in intensity as the first third continues. The cigar struggles to stay lit and as I puff on it to keep it lit there is some toasted earth notes building. Nearing the halfway point, some bread makes up the middle of the profile.
Jiunn: The first third’s experience sums it up in one word: incohesive. There’s just a smattering of random flavors; grass, hay, dehydrated vegetables, cedar and sharper minerals. Retrohaling gives some nice white pepper spice and increased cedar. The finish is quite boring with a white pepper spice on the rear palate. Strength and body is medium. 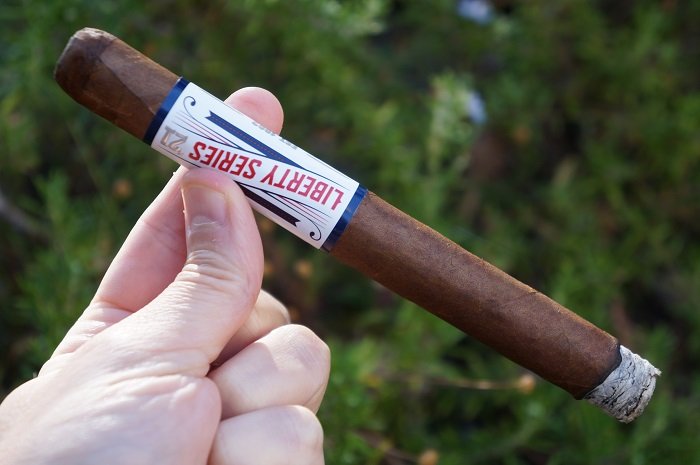 Aaron: As the second third begins, the toast level becomes fairly heavy. At a half inch in, the baking spice has transitioned to a dull black pepper and has a long finish. At three quarters of an inch, the overall dryness of the profile increases. The retrohale remains lightly musty and toasted oak along with some dry earth. At an inch and a half, the dry earth moves into the middle of the profile. As the third comes to a close, the dry earth has once again become even with the musty, toasted oak while the dull black pepper and faint bitterness is in the background. The strength in this third bumped up to medium.
Seth: The second third delivers a flavor profile of white pepper, lemon peel, manure, coffee grinds and earth. There are some creamy aspects, but there is this dirt quality with that cream.
John: The profile is wood forward here, with a mild, tannic wood finish that lingers on the post draw. There isn’t much in the way of evolution through the second third, with the flavors largely muted.
Jiunn: The second third continues to be incohesive. The vegetable notes are now bitter and have a leathery tinge to it. It’s actually a really odd flavor. Aside from that, I still get the sharper minerals and cedar. Strength and body is still medium. 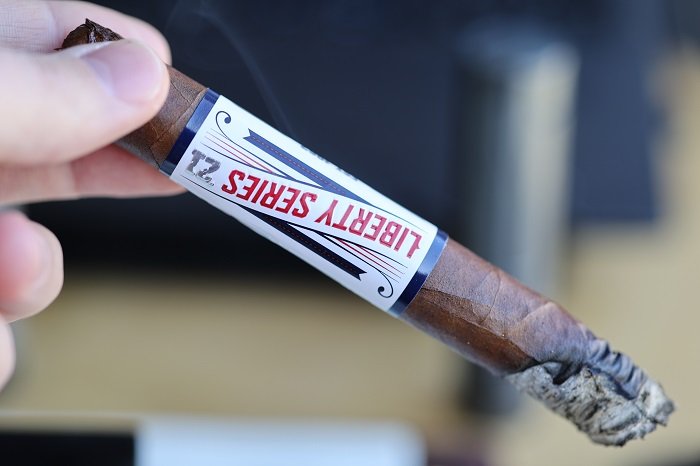 Aaron: As the final third begins, the heavy toast of the oak now becomes a light char. At a half inch in, the bitterness increases. The retrohale remains lightly musty and toasted oak along with some dry earth. At an inch and a quarter, the bitterness and char increase a bit more. The cigar wraps up with musty, charred oak and dry earth with bitterness and black pepper not far behind. The strength in this third bumped up to slightly above medium.
Seth: The final third was right there with the second. Long and painful finish.
John: Toasted earth leads into the last third, with an earth and tannic wood combination to finish the draw. The flavors remain the same through the rest of the final third.
Jiunn: The last third shows some relief from the random and incohesive flavors, but not enough to make a material impact. I’m mainly left with bitter cedar, leather and dehydrated vegetables. Strength and body finish the same medium. 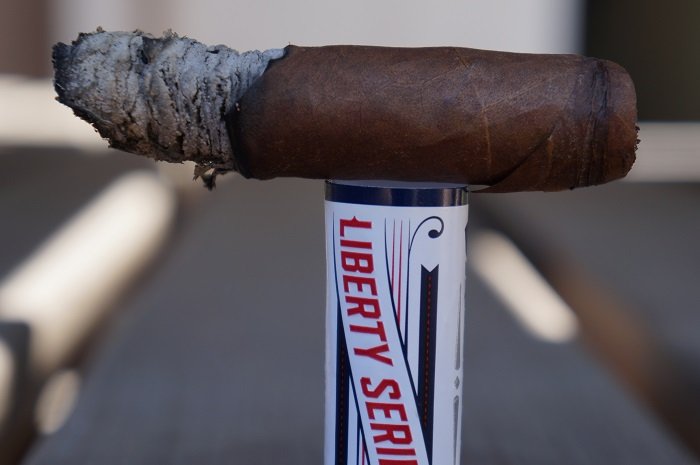 Aaron: The burn was straight throughout, but the cigar did go out once in the second third, requiring a re-light. The ash held on in near inch and a half increments.
Seth: Lovely burn from start to finish.
John: The burn had major issues through the review. The first third was uneven, and struggled to stay lit, resulting in a canoe and a touch-up. The burn continued to be uneven in the second third, going out at the halfway point, which required a re-light. The burn continued to struggle in the second third, going out and requiring a second re-light. There’s no question that the burn issues through the review impacted the overall flavor profile.
Jiunn: Flawless burn performance. Even burn, tight ashes, cool burning temperature and good smoke production. 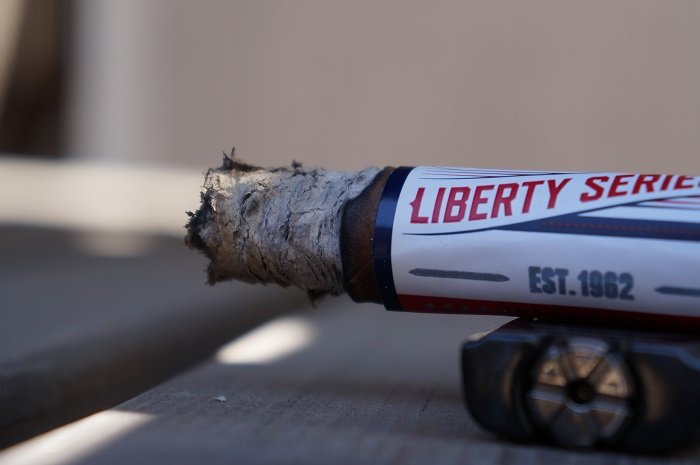 Aaron: The draw was slightly tighter than I prefer, but didn’t cause any issues with the smoking experience.
Seth: Great draw throughout.
John: The draw was fairly resistant, roughly 3-1/2 to 4 notches into the resistant spectrum.
Jiunn: The draw was also flawless, providing the best mixture of air flow and resistance.

Aaron: The cigar started with a fairly muddled profile of musty oak, dry earth and faint bitterness and some toast and later char joined in. The bitterness also increased as the cigar went along. The Camacho Liberty 2021 was pretty mundane throughout and did nothing to maintain my attention. The bitterness was a real bummer in the profile. This is a once exciting line that has fallen off the table. The high price point does it no favors and there is nothing about this cigar that would make me want to revisit it.
Seth: It’s time to end the Liberty Series. Camacho has got to see that this is not working. There may have been a time when smokers were enjoying these cigars over the 4th of July Holiday, but that is not happening anymore. The Camacho Liberty 2021 lacked quality flavors and depth. There was little transitioning and the complexity was unpleasant. Not a balanced cigar.
John: The Camacho Liberty 2021 was a disappointing experience that started out hopeful in the first third, but by the halfway point was a chore to finish reviewing. I believe burn issues were the main culprit behind the performance, with the cigar struggling to stay lit throughout. The cigar also had a resistant draw, which may have been a contributing factor. I do have a second Liberty 2021 that I can smoke, but to be honest this experience didn’t leave me with any desire to revisit it. I’ve said it in reviews in the past, there’s nothing more challenging as a cigar reviewer than smoking a large cigar that has poor flavor performance. Total smoking time was 2 hours and 48 minutes.
Jiunn: Granted, I haven’t consistently kept up with the Camacho Liberty Series (especially the newer releases), I never had this type of lackluster experience. And being completely honest, this Camacho Liberty 2021 borderlines being average and subpar. The mixture of flavors were odd and unbalanced being oddly bitter and leathery dry vegetation driven with minerals and cedar. In short, I sure as hell don’t feel liberating smoking this cigar.