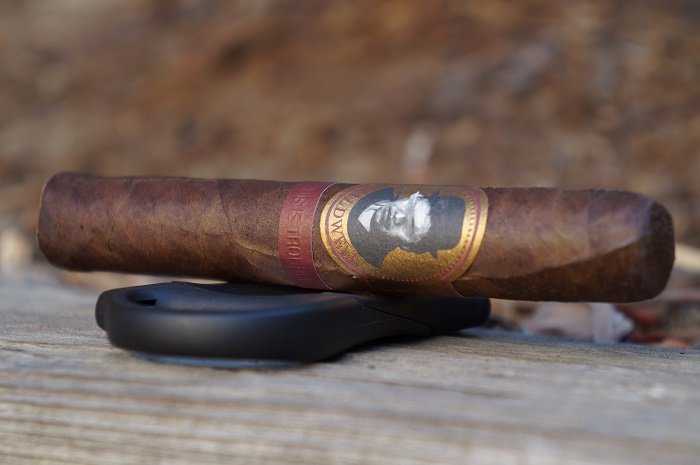 Aaron: The wrapper on the Caldwell Blind Man’s Bluff Maduro This is Trouble is medium brown with some darker marbling and has a couple of raised veins present. The seams are slightly raised while the head is finished pretty well. There are two bands, with the primary being gold and burgundy with the traditional logo used for this line. The secondary band is burgundy with embossed lettering denoting the sub-line/vitola. The aroma from the wrapper is a mix of dark earth, bakers chocolate and light spice. The foot brings lightly musty wood and some stone fruit sweetness. The pre-light draw brings an even mix of stone fruit sweetness and wood, along with a mid-level spiciness on my lips.
Seth: Finished with a wrapper that is toothy and gritty, there are some oily qualities to the touch. There is a nice firmness present with the Caldwell Blind Man’s Bluff Maduro This is Trouble, and there is a dark Colorado, light Maduro coloring. There are small to medium sizes veins present throughout, and I am picking up aromas of leather, chocolate, rich earth, barnyard and damp wood. Lots of sweetness.
John: The Caldwell Blind Man’s Bluff Maduro This is Trouble is cellophaned, and has a UPC sticker with an integrated tear point. The cigar is double banded. For aromas, I picked up on bread, wood and sweetness. From the foot, raisin and sweet tobacco came through.
Jiunn: The Caldwell Blind Man’s Bluff Maduro This is Trouble has a rustic maduro wrapper shade. Veins are overall roughly pressed, seams tight, bunch and roll even and head well wrapped. Aromas from the wrapper give cedar, dried fish and barnyard. Aromas from the wrapper tell a big blast of white pepper and subtle barnyard. Cold draw gives herbal tea and cedar shavings. 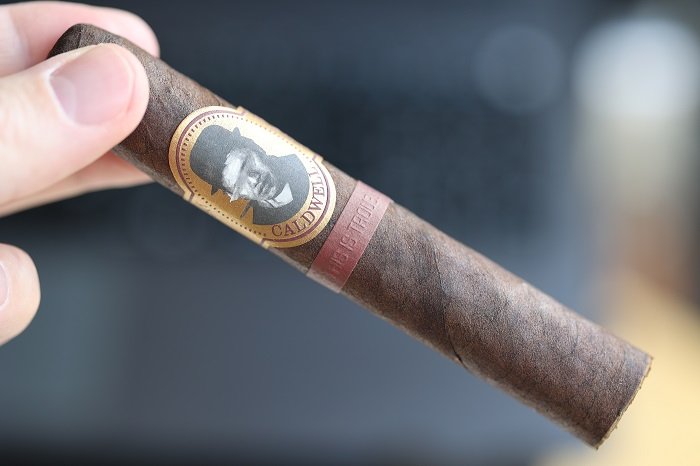 Aaron: The cigar begins with musty wood and sharp baking spice. At a quarter inch in, the wood has become quite dry. At a half inch in, a faint cocoa powder joins in. The retrohale is toasted wood with light black pepper. At an inch in, the baking spice isn’t as sharp and the wood gains some toastiness and isn’t as dry. As the third comes to a close, the baking spice has transitioned to black pepper. The strength in this third was right at medium.
Seth: The first third starts out with these damp earth and rich spice notes that have this faint wood and chocolate quality. It has this hollow chocolate egg quality to it. (Watch the video for explanation.) Very short finish. Medium in strength and body.
John: The first third begins with bread, baking spices and a sweet finish with cinnamon coming into the post draw, and giving way to wood. Some mild leather develops on the center of the profile. Earth also develops just at the end of the draw as the first third progresses. The baking spices reach medium-full strength on the retrohale. In the bottom half, bread and baking spices harmonize in intensity.
Jiunn: The first third starts off with a nice level of viscosity, giving notes of cocoa, raw cedar, chalk and slightly bitter tea. Retrohaling brings true spice into the profile, in the form of white pepper spice, as well as more cocoa. The finish is a bit drying on the palate with a lingering raw cedar. Strength is medium-full, body is medium. 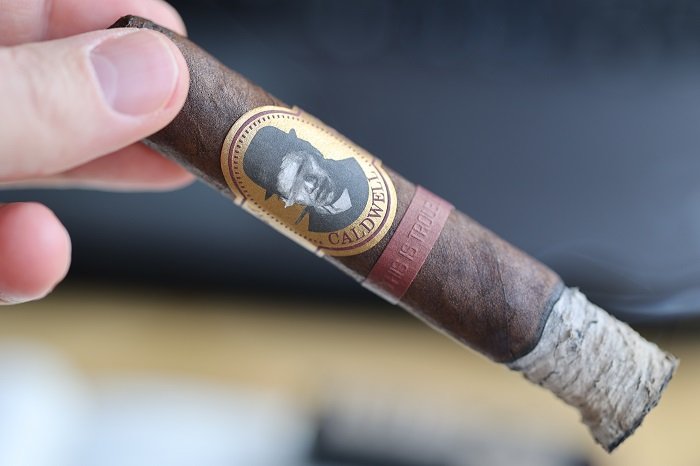 Aaron: The second third continues with the musty and toasted wood, which is now more defined as oak, along with some black pepper and faint cocoa powder popping up in random draws. At a half inch in, the mustiness has become very light, the cocoa powder has disappeared as some dark earth has joined the profile. The retrohale is now toasted and musty oak along with dark earth. As the third comes to a close, the profile is toasted, musty oak and dark earth even up front with black pepper in the background. The strength remains at medium.
Seth: I found the second third to be stronger than that of the first third and I was picking up some coffee and black pepper notes with the wood, chocolate, earth and spice profiles from before. Just above medium in strength and body.
John: My first few puffs in the second third consist of sweet syrup, bread and light-plus baking spices with a mild wood finish into the post draw. As the second third progresses, mild, dry cedar moves into the center of the profile. In the bottom half, some mild earth comes through on the post draw.
Jiunn: The second third is less enjoyable than the first third. Reason being, the complexities take a dive as it’s mainly just a raw cedar dryness with a hint of bitterness attached. Strength and body is still medium-full and medium. 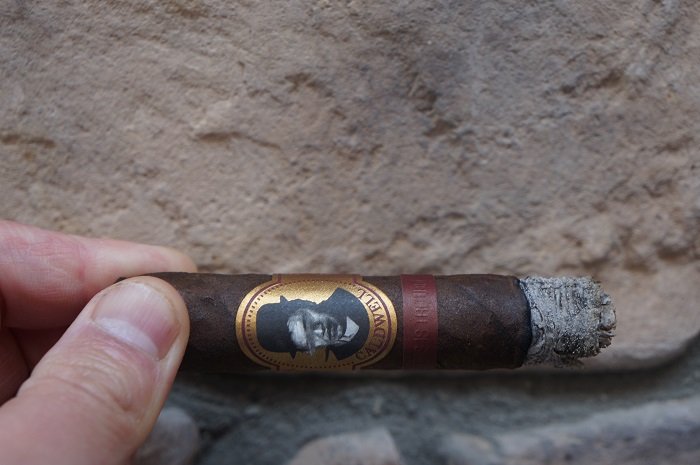 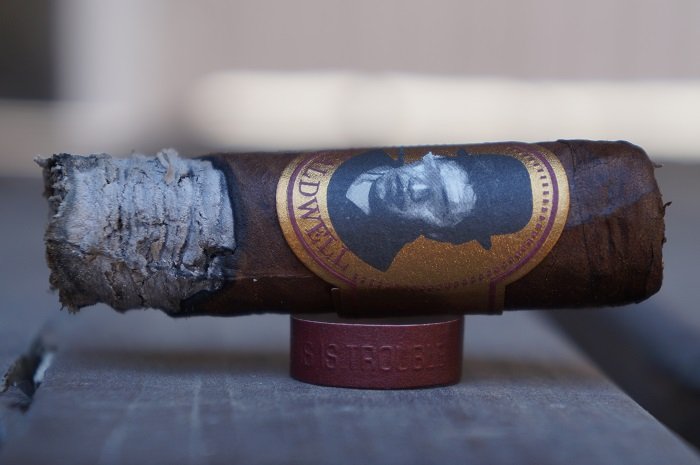 Aaron: The burn was a bit wavy at times and the cigar went out once, requiring a re-light. The ash held on in inch and a half increments.
Seth: The burn was poor, but in terms of a lot of Caldwell and Ventura cigars that are released, I would say it was average to good.
John: The burn is slightly uneven as it starts, evening out and remaining straight for the remainder of the review. The ash had some flakiness to it.
Jiunn: Perfect burn performance. Even burn, solid ashes, cool burning temperate and ample smoke production 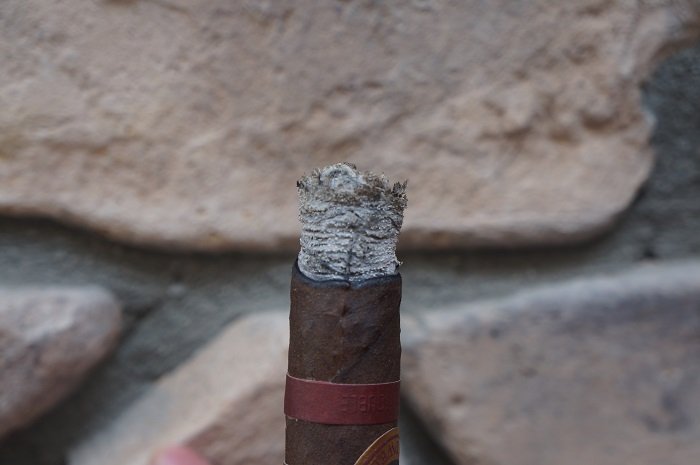 Aaron: The draw was slightly tighter than I prefer, but didn’t cause any issues with the smoking experience.
Seth: Nice draw throughout.
John: The draw had at most 1 notch of resistance to it, putting it in the zone of an ideal draw.
Jiunn: The draw was also perfect, striking the ideal air flow.

Aaron: The cigar had a pretty consistent flavor profile throughout, focused around musty, toasted wood, starting with baking spice that transitioned to black pepper with the addition of dark earth. The Caldwell Blind Man’s Bluff Maduro This is Trouble was just a bit too basic and the overall dryness was there fairly early and was a bit of a detractor for me. Nothing wrong with the cigar, just not something that grabbed my attention and I doubt that I’ll come back to it.
Seth: I was not pleased with the Caldwell Blind Man’s Bluff Maduro This is Trouble. This may come as a shock to Surgeon and the rest of the guys, but there was too much Dominican tobacco in this blend. Dominican tobacco with a Mexican San Andrés wrapper appears to be a disaster. At least for Ventura. This was just bad from beginning to end. The first third couldn’t get things going, second third was lacking and final third was terrible. I can’t believe this is a $10.00 cigar.
John: The Caldwell Blind Man’s Bluff Maduro This is Trouble kept me engaged through the first and second thirds with an interesting combination and balance of flavors. The draw and burn were fairly flawless. Based on this review experience I would add this cigar to the list of Caldwell releases I would happily smoke again. Total smoking time was 1 hour and 43 minutes.
Jiunn: This is Trouble (for my palate). Well, to be more exact, This is trouble for my palate for two thirds of the cigar. First third showed some nice promise, giving me cocoa, raw cedar, chalk and slightly bitter tea. But for the majority of the Caldwell Blind Man’s Bluff Maduro This is Trouble, it was an average tasting raw cedar dryness and a hint of bitterness attached. For me, it’s a pass.