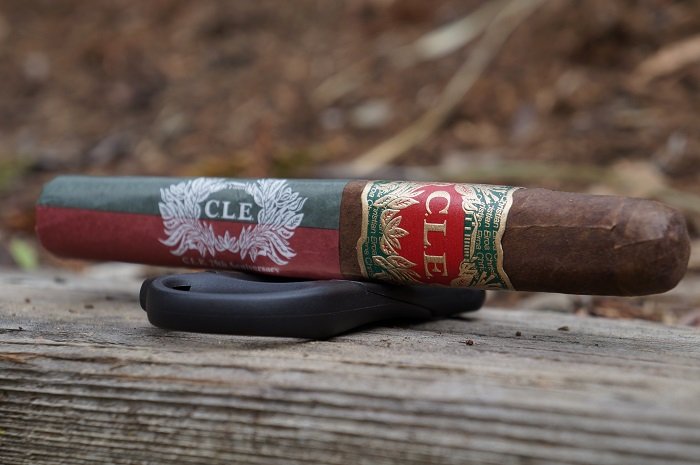 Aaron: There is a green and red tissue sleeve that covers just over half of the C.L.E. 25th Anniversary 11/18 TAA from the foot to just under the band. The band is red, green and gold and designates the brand name as well as a repeating of the name of the owner across the front. After sliding off the sleeve, the 11/18 vitola shows itself, covered in a milk chocolate brown wrapper with some lightly raised veins that carry a slightly lighter color. This cigar may have the best seam work I’ve ever seen as they are extremely hard to detect. The caps are also expertly applied. The aroma from the wrapper is a slightly sweet cedar while the foot brings more of an aged cedar. The pre-light draw brings a lightly sweet and airy cedar along with a mild spiciness on my lips.
Seth: The 11/18 is one of those funky sizes I cannot quite figure out. Slightly tapered at the head and foot, the C.L.E. 25th Anniversary 11/18 TAA is finished with a coarse wrapper and it sports some veins and tooth. The cigar is firm throughout and the coloring is that of dark Colorado, almost Colorado Maduro. The wrapper is giving off aromas of leather, dried meat and earth, while the foot is giving off notes of spice and tobacco.
John: The C.L.E. 25th Anniversary 11/18 TAA impressed on the pre-light experience. First you have the box pressed format, then a branded two color paper wrapper taking up 2/3 of the cigar. The band is an elegant gold, red, and green. For aromas, I was able to detect intensely aromatic wood and baking spices. From the foot, I smelled dry hay.
Jiunn: The C.L.E. 25th Anniversary 11/18 TAA has a uniform light roast coffee bean brown to the wrapper shade. Veins are well pressed, seams tight, bunch and roll firm and even and head well wrapped. Aromas from the wrapper give some faint white pepper. Aromas from the foot tell nose stinging white pepper and nuts. Cold draw gives white pepper and black coffee. 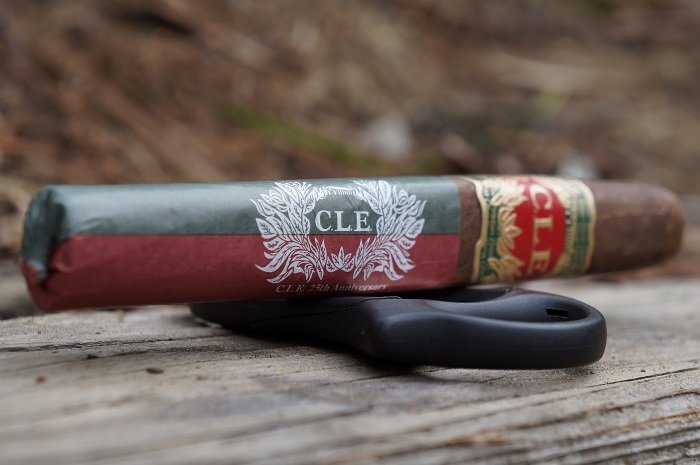 Aaron: The cigar begins with cedar, an intense baking spice and black pepper combination and light cocoa. At a half inch in, the cocoa becomes very subtle and a light mustiness joins the profile. The retrohale brings some cedar, but the baking spice/black pepper mixture is the main attraction and has a heavy zing to it. As the third comes to a close, the baking spice/black pepper combination has mellowed a bit as the cocoa is no longer present. The strength in this third was medium-full.
Seth: The first third opens by delivering some lovely coffee bean notes. There are some cream qualities with that, and it has touches of earth and peppery spices as well. There are some herbal and mint qualities as well, and I would classify the cigar as medium-full in strength and body.
John: The 25th Anniversary 11/18 TAA kicked things off with chocolate up front and muted spices and cedar to finish. The post draw has a lingering wood component. A mild mustiness takes up the center of the profile as the cigar settles in. Sweetness comes through on the retrohale shortly after. Roughly one inch into the review, there is a really intriguing baking spice and wood combination through the retrohale. Mild sourness serves to accent the profile by the halfway point. Some light plus pepper builds in the bottom half, incorporating itself into the mustiness.
Jiunn: The first third has a full flavor mixture of sweet and creamy roasted nuttiness and white pepper spice. This flavor combination only gets better on the retrohale, being amplified in intensity. The finish is a soft but long lingering roasted nuts. Strength is medium plus, body medium. 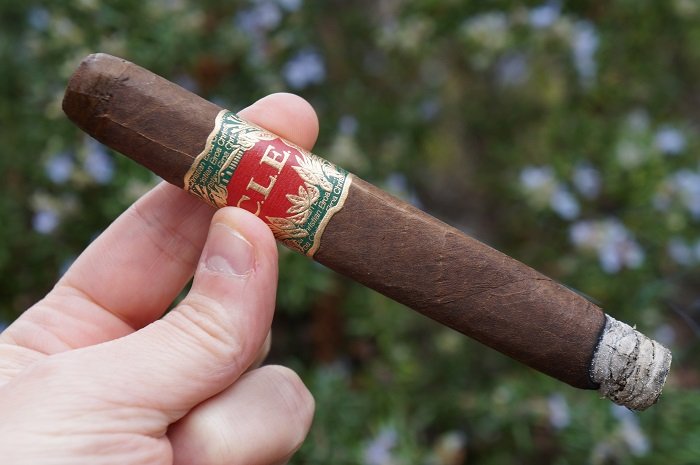 Aaron: As the second third begins, the spicy combination has mellowed a bit. At a half inch in, the baking spice/black pepper combination has a slight lead over the musty cedar. The retrohale is now musty cedar, dry earth and light black pepper. At an inch and a quarter, the baking spice has left the profile and now the black pepper and musty cedar are even. At an inch and a half, some earthiness joins the profile. The strength in this third dropped down to slightly above medium.
Seth: The second third shows an increase in the spice notes. I am getting a lot more black pepper in this third. The coffee notes are stronger as well, and the finish is that of subtle leather, wood and cream qualities. Like before, it is medium-full in strength and body.
John: A mild musty, citrus, sour and wood combination take the cigar into the second third. A musty and wood combination settle into the middle of the profile, with dry cedar on the post draw. Shortly after, a trailing sweetness accents the cedar on the post draw.
Jiunn: The second third leans towards being more white pepper driven as compared to the first third’s equal parts nuttiness and pepper. The finish picks up a nice baking spice and minerals to the existing roasted nuts. Strength and body remains medium plus and medium. 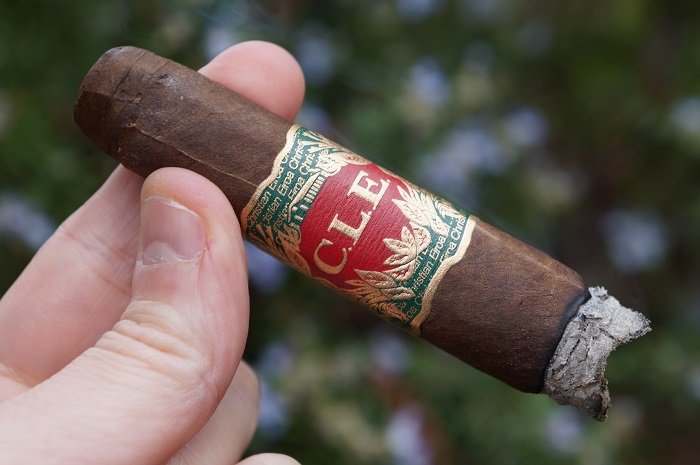 Aaron: As the final third begins, the musty cedar and dry earth are even up front with the black pepper in the background. At three quarters of an inch in, the black pepper has departed. The retrohale is musty cedar and dry earth. As the third wraps up, the musty cedar gains some char to go along with the dry earth. The strength in this third remained at slightly above medium.
Seth: The final third was nearly identical to that of the second third and I was getting a flavor profile of tobacco, cedar, cream, coffee and peppery spices. There are some herbal qualities as well, and while the profile is not bad, it is lacking in terms of complexity. Like before, medium-full in strength and body.
John: The last third begins with mild, sweet mustiness and wood. A lingering citrus takes home in the post draw, as baking spices define the retrohale. As the second third progresses, tannins build, offsetting the sweetness. As the cigar reaches the midway point, mild bitterness is present in the center.
Jiunn: The final third continues to lean towards being spice driven. At this point, it’s mainly white pepper spice, minerals, baking spices, with the roasted nuttiness a distant past. Strength and body finishes the same medium plus and medium. 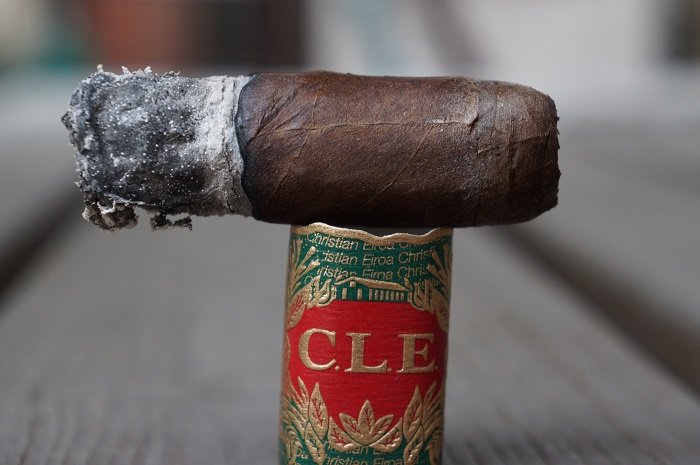 Aaron: The burn was a bit of a struggle as the cigar went out twice, requiring re-lights and two touch-ups were needed to keep the wrapper burning in unison.
Seth: Beautiful construction from start to finish. Well-constructed cigar.
John: The burn was straight through the review experience, with a bright, white ash. The ash dropped off in 1-1/2 inch increments.
Jiunn: Burn performance was almost perfect. The only downside was a heavy uneven burn, requiring a couple quick touch-ups. 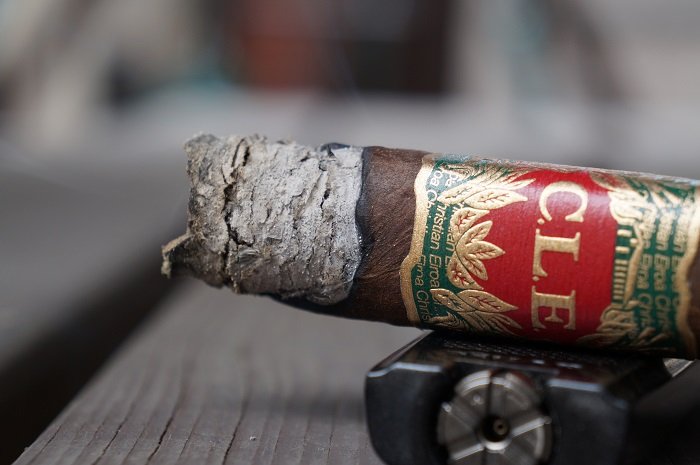 Aaron: The cigar started out as a pepper and spice bomb, but the balance was pretty good with the cedar and mustiness. At about the halfway point, the baking spice faded out and the black pepper then followed with it’s exit. The burn was a bit of a downer, but the flavor profile held up through the issues. This C.L.E. 25th Anniversary 11/18 TAA turned out to be a bit of a bright spot in another year of disappointing TAA releases. The price point is high on this cigar, but I think is worth it for the occasional enjoyment. I’d smoke another, in hopes of a better burn, and it’s a nice addition to the C.L.E. portfolio.
Seth: I was not blown away by the C.L.E. 25th Anniversary 11/18 TAA, and for a 25th Anniversary and TAA release it was a dud. The blend was lacking in terms of complexity and depth from start to finish. There was little transitioning and the cigar simply seemed flat. I was hoping with the vitola offering for some changes throughout, but that did not take place. A miss for CLE on many levels. I am never going to give up on the quest for great Honduran puros, but you must work your way through a lot of misses to get a good one.
John: The C.L.E. 25th Anniversary 11/18 TAA had an intriguing first third, with the type of engaging Honduran tobacco flavors that C.L.E. does so well. The second and last thirds were pleasant, but didn’t maintain the same level of complexity as the first third. Burn was flawless, with some small resistance to the draw. I was happy to have had the opportunity to review the cigar, but given the price point, I’m more likely to reach for one of the many other less expensive offerings they have. Total smoking time was 1 hour and 46 minutes.
Jiunn: After reviewing what seems like countless TAA releases, I finally found one that I like overall. The C.L.E. 25th Anniversary 11/18 TAA is one of those cigars where it isn’t highly complex with a wide range of flavors. Instead, it does a good job of having a couple flavors that are full and consistently pulls through for the vast majority of the smoke time. The only let down is the near $18 price range. You can definitely find cheaper alternatives in the CLE portfolio that’ll give you a similar experience.