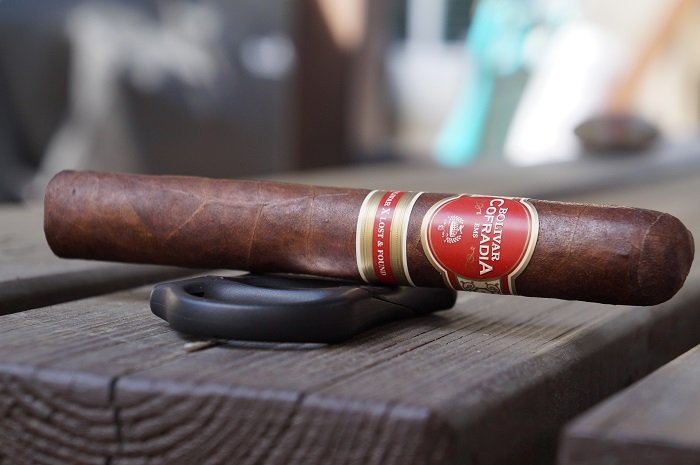 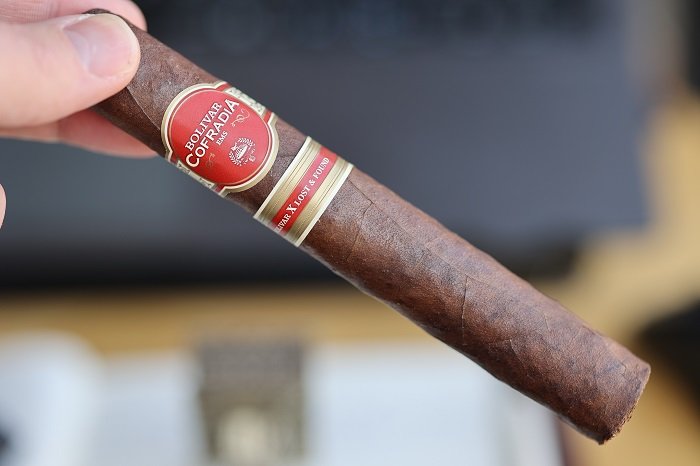 Aaron: The cigar begins with light toasted oak, chalkiness and a mild black pepper. The retrohale is light toasted oak and a slightly creamy chalkiness. At an inch and a quarter, a light earthiness joins in. As the third comes to a close, the lightly toasted oak is slightly ahead of the chalkiness and earth while the black pepper is mild in the background. The strength is slightly below medium.
Seth: The first third starts out by delivering some noticable earth flavors that are paired with some cedar, white and black pepper qualities.There is some sweetness, fruitiness as well, but it is really giving off solid earth and peppery spice qualities. Medium in strenght and body.
John: A sweet, creamy wood at light levels opens up the first third. There is a satisfying amount of smoke production right out of the gate. Graham cracker breaks through the retrohale as mild tannins join a woody finish. Some citrus acidity is at the front of the draw as the cigar progresses. Some time later, the acidity fades and is replaced with creaminess. Moving towards the halfway point, citrus shows up at the end of the draw. In the bottom half, mild chocolate combines with citrus on the retrohale.
Jiunn: The first third provides a mixture of sweet hay and cedar. Retrohaling bears no spice notes, further accentuating the sweet hay and cedar notes. The finish brings a yeasty bread to the profile as well as the same hay. Strength and body is medium. 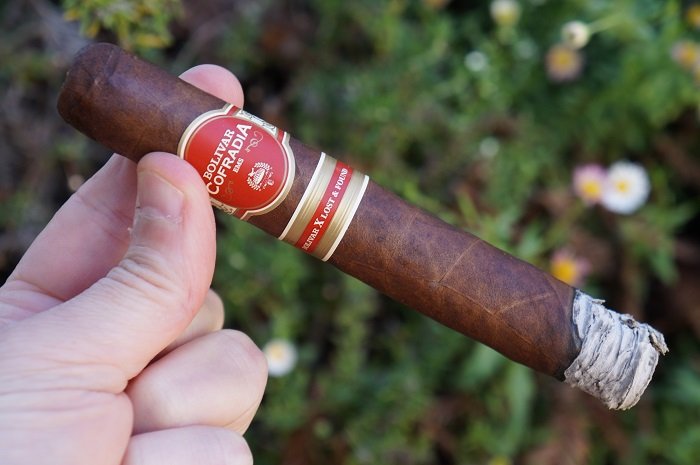 Aaron: As the second third begins, the earth becomes a bit dry and takes a slight lead over the chalkiness. At an inch in, the dry earth is now even up front with the toasted oak. The retrohale is toasted oak, chalkiness and light, dry earth. As the third comes to a close, the toasted oak and dry earth are even up front with chalkiness a bit behind and black pepper in the background. The strength has bumped up to medium.
Seth: The second third was fairly in line with the first third. I was picking up some earth, cedar and pepper spice qualities. Some sweet fruit qualities as well. Medium in strength and body.
John: Creamy citrus leads things off here, as chocolate and a mildly bitter wood add flavor complexity. As it progresses, the bitterness fades and is replaced with some tannic quality. The profile settles in at medium minus strength. Approaching the halfway point, a sudden burst of barnyard is present in the center of the profile.
Jiunn: The second third still has plenty of soft notes. At this point it’s all about sweet hay and bread. The finish does pick up a slight amount of tannins to the same flavors of bread and hay. Strength and body is unchanged at medium. 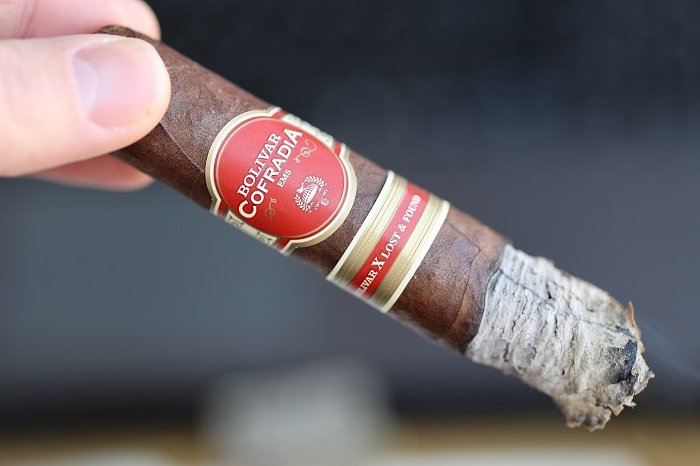 Aaron: The final third begins with the toast level increasing a bit. At a half inch in, the chalkiness increases to become even with the toasted oak and dry earth. The retrohale remains toasted oak, chalkiness and light, dry earth. At an inch and a quarter, the cigar warms up and a light wood bitterness becomes present. As the cigar comes to a close, the toasted oak, dry earth and chalkiness are all even up front with black pepper and bitterness in the background. The strength remained at medium.
Seth: The final third was right in line with the second third in terms of flavors, but the strength and body kicked up. Some peppery spice qualities. Earth qualities paired with cedar as well. Faint sweetness on the finish, but not harsh or showing mineral. Medium-full in strength and body.
John: The last third starts with creamy vanilla, wood and a tannic dry wood carrying into the post draw. Some lingering dry wood at light-plus strength sits between draws. As the last third continues, light-plus baking spices come through the retrohale. By the bottom half, citrus sweetness at light-plus is present on the retrohale.
Jiunn: The final third’s main change is the mouthfeel. Specifically, the tannins become fuller, almost caking my entire palate. In terms of flavors, it’s still the same sweet hay and bread. Strength and body finishes the same medium. 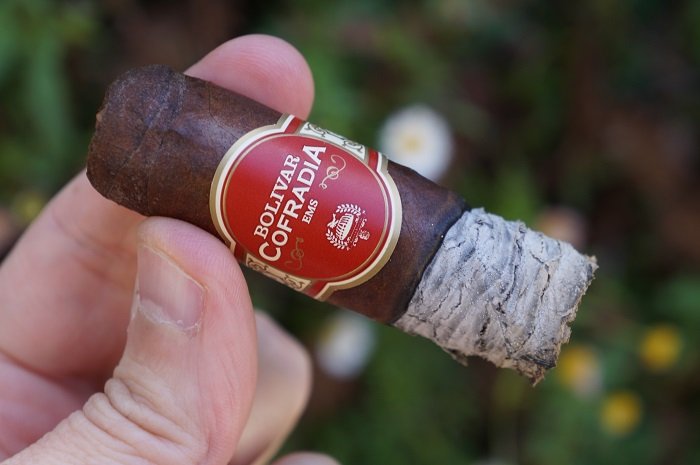 Aaron: The burn was pretty straight throughout, but the cigar did go out twice, requiring re-lights.
Seth: Perfect burn.
John: The burn started out slightly uneven but corrected itself shortly after. The burn is straight until the last third where it’s slightly uneven again, eventually self correcting. The ash held on well in one inch increments.
Jiunn: Spot on burn performance. Even burn, tight ashes, cool burning temperature and great smoke production. 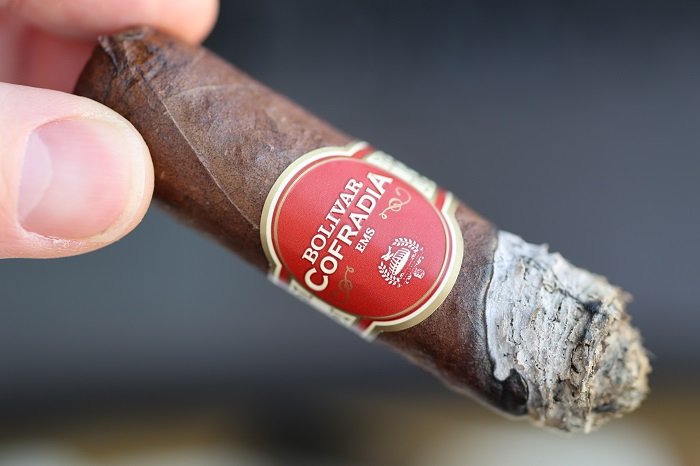 Aaron: The cigar began with lightly toasted oak, chalkiness and a mild black pepper. Some earth joined a bit later. The second third saw the earth become a bit dry. The final third saw some bitterness join towards the second half. The Bolivar Cofradia Lost & Found EMS Toro was quite mundane with a flavor profile focused around toasted oak, dry earth, chalkiness and light black pepper. These components just changed up in fullness, but other than that, no real transitions. There wasn’t really anything off-putting about the cigar, but the chalkiness isn’t a component I find enjoyable. The price is attractive, but even with that, it’s not something that I want to come back to.
Seth: The Bolivar Cofradia Lost & Found EMS Toro was an enjoyable cigar. It had a core flavor profile that was nice, and it was delivered well thorughout. It did not show a lot of depth and complexity, but it was very solid and it never went downhill. Construction was great as well. An easy cigar to smoke, and a cigar that you can focus on or not focus on to enjoy. Very price friendly.
John: Most of the time, cigar collaborations don’t work out, so I was certainly going into the review with a managed sense of expectations. The Bolivar Cofradia Lost & Found EMS Toro delivered layered, subtle and nuanced flavors through the first two thirds which kept me engaged and satisfied. The last third wasn’t quite up to the same levels, but still pleasant. Both the construction and draw were perfect. Once you factor in the price point on these, this would be an absolute no brainer cigar to be smoking on a regular basis if you’re looking something at the lighter end of the strength spectrum but still delivers medium bodied flavors. Total smoking time was 2 hours and 6 minutes.
Jiunn: Given how soft, approachable and “smooth” the Bolivar Cofradia Lost & Found EMS Toro is, I think it fits well for someone starting off in cigars. But for the more seasoned cigar smokers, there is enough details to keep you engaged as well. Just don’t go in with the expectation that the cigar will give you any boldness or deepness in flavors or strength.