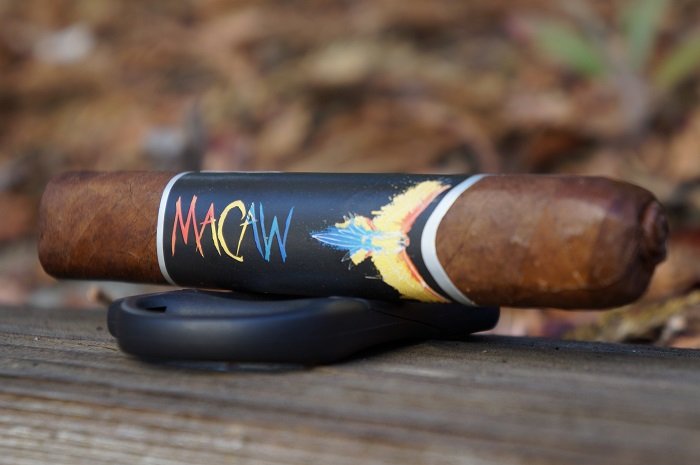 Aaron: The first thing you notice about the Blackbird Macaw is the band, which covers half of the cigar and is black and silver with the line name and picture of a macaw on the front. The wrapper is medium brown and has a couple of decently raised veins and a network of fine veins. The seams are smooth, head finished with a tightly wound pigtail, while the foot is partially covered with folded over wrapper. The aroma from the wrapper is a mix of cardboard and light earth while the foot brings dried apple. The pre-light draw brings a mix of cedar and cardboard.
Seth: I love the presentation of the Blackbird Macaw. The coloring and design of the band, the pigtail cap and the slightly closed foot suck me in. The coloring is that of light chocolate brown, and it has this marbled Colorado Maduro coloring. Aromas of cocoa, earth and barnyard.
John: The Blackbird Macaw is cellophaned, with a UPC sticker that tears in half when the cellophane is opened. The cigar sports additional complications of a pigtail cap, and a partially closed foot. Aromas from the cigar include barnyard at medium strength, and sweet tobacco. From the foot, there is raisin and hay.
Jiunn: The Blackbird Macaw has an attractive, oily, Colorado Maduro wrapper shade. Veins are well pressed, seams tight, bunch and roll firm and head well wrapped. Aromas from the wrapper tells dirty socks, nuts and cedar. Aromas from the enclosed foot give the same. Cold draw gives black pepper, tar and cherries. 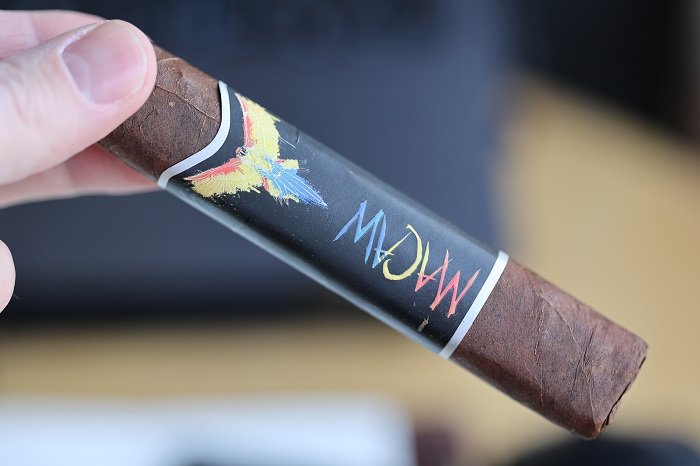 Aaron: The cigar begins with cedar, cardboard and baking spice. At a half inch in, the cedar gains a toasted note and the cardboard becomes very mellow while a light mustiness has also joined in. The retrohale is toasted cedar with baking spice and mustiness a bit behind. At an inch in, the baking spice has morphed into black pepper, the cardboard note has departed and some dry earth joins in. The third wraps up with toasted cedar up front and black pepper, dry earth and mustiness right behind. The strength in this third was right at medium.
Seth: The first third starts out with some light pepper notes, white pepper qualities and I am picking up some hay and cedar notes with the pepper. There are some soft earth notes with that, and I am picking up a finish of hay. Medium in strength and body. Peppery finish.
John: The first third gets started with baking spices, wood and delayed nutmeg and wood into the post draw. There is some toasted earth that settles into the center of the profile. As the first third progresses, minerality moves to the front of the draw. Vegetal notes come through at the end of the draw, approaching the 30 minute mark. Earth fades some time after. In the bottom half, some sweetness and mild baking spices come through. As the bottom half continues, the baking spices are muddled and not clearly defined. Some herbal notes move into the middle of the profile.
Jiunn: The first third gives a great balance between sweet and spicy. A creamy bready sweetness compounded by a seeded dry red pepper spice. There’s also the typical earthy tones of cedar and sharper baking spices. Retrohaling gives deeper seeded red pepper spice but also more cream, and introduction of cherries. The finish is incredibly drawn out with the red pepper spice. Strength is medium-full, body is medium. 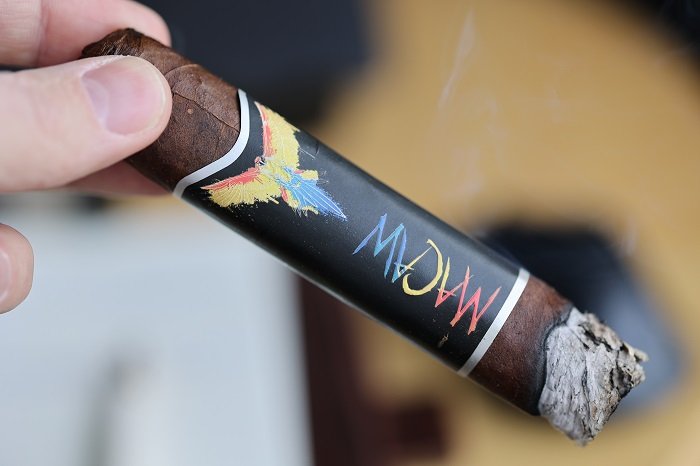 Aaron: As the second third begins, all of the components are even. At a half inch in, the black pepper has mellowed a fair amount. The retrohale is musty, toasted cedar and dry earth. At an inch in, the toasty, musty cedar gets back to a slight lead over the dry earth and black pepper. As the third comes to a close, the toasty, musty cedar remains up front with dry earth right behind and the black pepper in the background. The strength remains at medium.
Seth: The second third shows some transitioning overall as a blend. I am picking up some lemongrass and coffee qualities, and it is paired with some cream and wood notes. There are some pepper notes on the finish, and it is paired with this herbal quality. Medium to medium-full in strength and body.
John: The first few puffs here are baking spices, wood, and the wood carries into the post draw. The baking spices move up to medium-full in strength, and bring the wood intensity with it. The cigar becomes largely wood forward in the bottom half, as the baking spices fall back to just below medium strength.
Jiunn: The second third tips the scale and becomes a bit more spicy without the help of sweetness. Further, a construction paper note appears, but it’s not so much that it’s hindering the flavor package. Strength is still medium-full and medium, respectively. 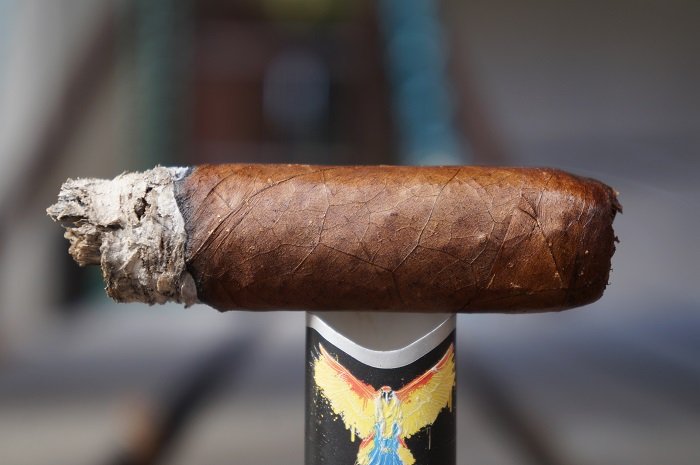 Aaron: As the final third begins, the musty, toasted cedar lengthens its lead over the dry earth while the black pepper remains in the background. At a half inch in, the black pepper picks up a bit, becoming even with the dry earth. The retrohale remains musty, toasted cedar and dry earth. At three quarters of an inch in, the toast level becomes very heavy. The cigar wraps up with musty, heavily toasted cedar up front with dry earth and black pepper a bit behind. The strength remained at medium.
Seth: The final third delivers a dryer flavor profile, and I am picking up lots of pepper, cedar and hay notes. There are dry earth, mineral and nutty qualities on the finish, and it is medium in strength and body.
John: The last third is dry wood forward, as the wood carries into the post draw and lingers between each draw. As the last third settles in, mild sweetness pushes into the middle of the profile. Some time later, delayed earth is present at the end of the draw, mixing with the wood on the post draw.
Jiunn: The final third’s flavor profile continues to deteriorate. The profile picks up a charred/burnt oak. This note, with construction paper and deeply seeded red pepper spice, is a bit awful. Still get some of the creamy bread but it’s highly masked by the other flavors. Strength and body finishes the same medium-full and medium. 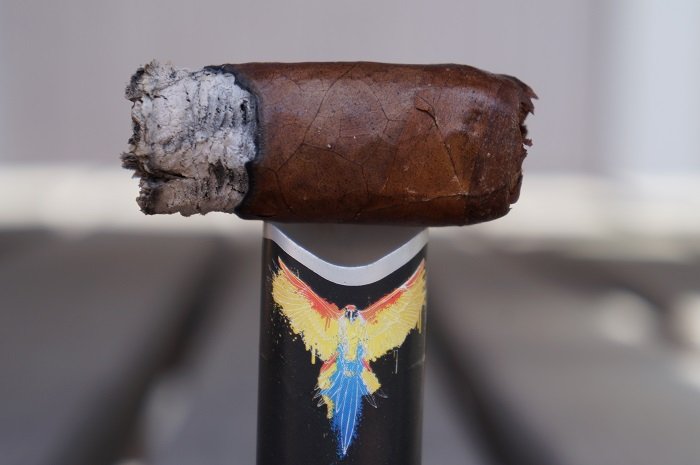 Aaron: The burn was a bit wavy at times, but always self corrected. There were two times where the smoke production got really low and I knocked the ash off to add a little more fire to get things going again.
Seth: Nice burn line throughout.
John: The burn was struggling to stay lit as it proceeded in the first third. Burn became lopsided but self corrected. There were minor wrapper burning issues throughout the review, but they always self corrected.
Jiunn: Great burn performance. Even burn, tight ashes, cool burning temperature and ample smoke production. 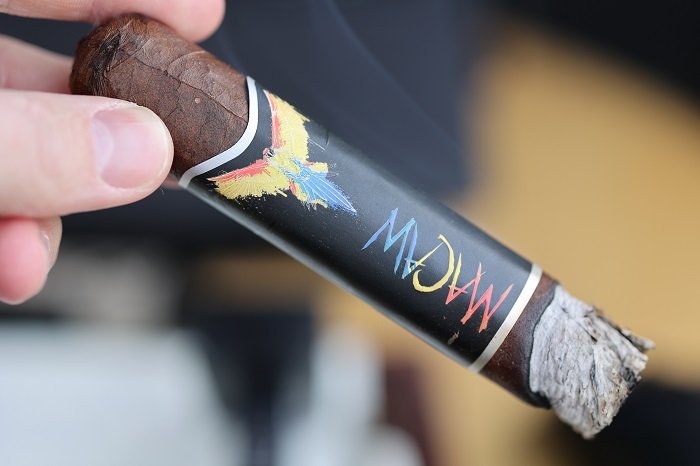 Aaron: The draw was slightly tighter than I prefer, but didn’t cause any issues with the smoking experience.
Seth: Slightly tight draw, but not an overall problem.
John: The draw was approximately 1/2 to 1 notches into the open spectrum, still putting it in the ideal range for a perfect draw.
Jiunn: The draw was also great, striking the ideal air flow and tightness.

Aaron: The flavor profile was focused around musty, toasted cedar, dry earth and baking spice. Other than the first half inch or so, not much in the way of transitions, so fairly linear throughout. The Blackbird Macaw was pretty average as it was a fairly familiar flavor profile found in any number of cigars. The price point on this is quite high and the flavor profile doesn’t live up to it, especially with it being a limited edition. I don’t really see myself coming back to this cigar.
Seth: I waited in writing this conclusion, and the only thing that comes to mind are the colors and font of Macaw. What does that tell you about the Blackbird Macaw? It looked great, love the presentation, but there was nothing there that made me call like a bird. There was also nothing there that made me irritated. I can’t speak highly or poorly about a cigar I will never smoke again or even think about. I don’t think anyone can. Instead of having this macaw linger around and copy every word I say, I am letting it free. It can take its nice construction and fly away. Be free average!
John: The Blackbird Macaw was fairly linear throughout the review, with the flavors not harmonizing or providing complex engagement for my palate. The burn was near perfect, and the draw was in the ideal range. Based on the flavor profile, this isn’t something I’d be interested in returning to, but I’d always welcome trying other releases from Blackbird to see what else they have to offer. Total smoking time was 2 hours and 16 minutes.
Jiunn: Judging by the cover of the book, I thought a developing brand plus a high $16 price tag gave me a bit of an eye roll. But when I lit up the Blackbird Macaw and got through the first third, I was happy to be wrong. Beautifully spicy and sweet with a deep, long finish. Regrettably, the next two thirds didn’t taste very good as there was too much harshness seeping through. Nice start, but it didn’t finish strong.