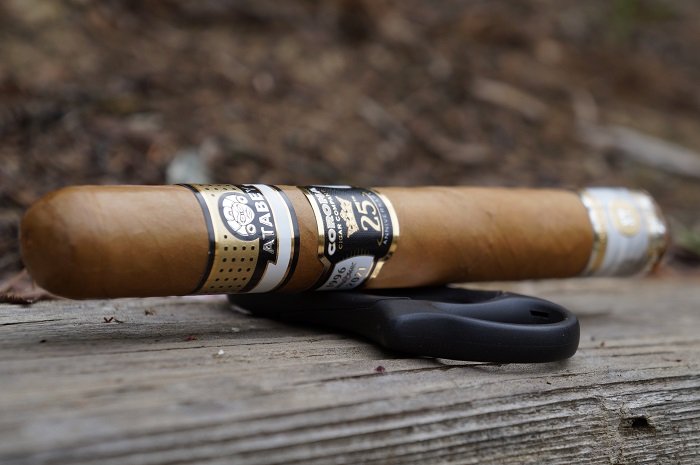 Aaron: The wrapper on the Atabey Corona Cigar 25th Anniversary is medium tan and has a network of fine veins. The seams are easily visible as they are a bit raised, while the head is finished with a very well applied set of caps. There are three bands, with the primary and foot bands being the traditional design for the brand. The secondary band carries a similar color combination and denotes the 25th Anniversary for Corona Cigar Company. The aroma from the wrapper is a light dry hay while the foot brings a mix of wood, tobacco sweetness and light spice. The pre-light draw brings a sweet cedar.
Seth: Finished with a beautiful cap, the Atabey Corona Cigar 25th Anniversary sports a lovely light Natural colored wrapper that is silky in texture. There are small to medium sized veins throughout, and the cigar is quite firm as well. The wrapper sports an aroma of strong manure, tobacco and hay. The foot is giving off an aroma of earth, wood, tobacco and hay.
John: The Atabey Corona Cigar 25th Anniversary certainly puts on a showcase for the pre-light experience. The cigar is triple banded, with the Corona 25th Anniversary secondary band and a Selected Tobacco foot band. The cigar also appears to have a beautifully applied triple cap and a silky smooth light brown wrapper. There is no cellophane and thus no UPC sticker or cigar identification. Aromas from the cigar included bread, cedar and the unmistakable smell of tobacco bails. There was mild, sweet cedar from the foot.
Jiunn: The Atabey Corona Cigar 25th Anniversary has three bands. That makes it very good. The cigar is packed full of tobacco, being very weighty. Veins are well pressed, seams tight, bunch and roll even and head well wrapped. Aromas from the wrapper give refreshing mint and barnyard. Aromas from the foot tell barnyard and cedar. Cold draw reveals hay and nuts. 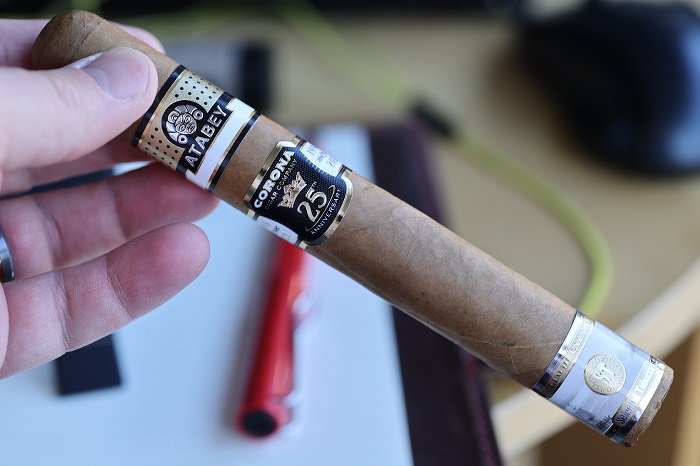 Aaron: The cigar begins with a very light mix of aged cedar and mustiness. At a half inch in, a faint chalkiness joins the profile. The retrohale brings a musty and stale wood. At an inch and a quarter, the aged cedar takes on more of a stale, general wood note. As the third comes to a close, the profile is musty, stale wood with a trailing chalkiness. The strength in this third was mild.
Seth: The first third begins by delivering lovely honeycomb and sweet spice notes. I am picking up some hay and cedar as well, and it is balanced. I am also picking up some cinnamon and nutmeg qualities. There are some creamy aspects to the cigar as well, and it is paired with some tobacco and baking chocolate. In terms of strength and body, I would classify the cigar as a solid medium.
John: The first third opened with sweet bread, at light plus strength, finishing light plus strength wood. That was it. That was the complete flavor experience for the first third. Pleasant, but lacking depth, complexity and progression.
Jiunn: This is a finesse cigar. Full flavors of buttered Hawaiian rolls, ripe cherries and baking spices. Retrohaling draws out more baking spices and cedar. The finish is a soft and lasting cedar. Strength and body is medium. 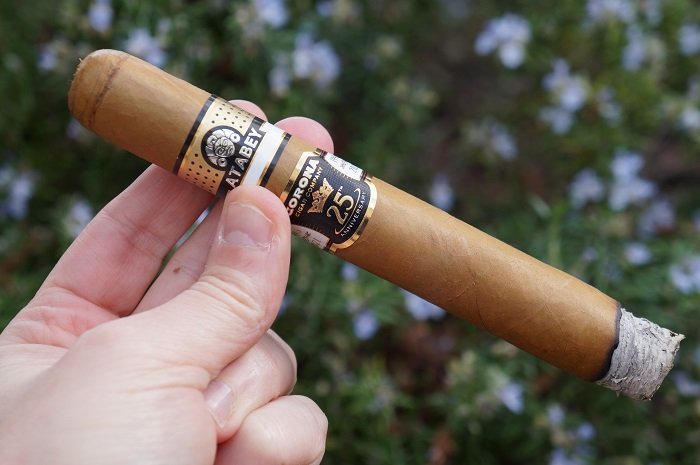 Aaron: The second third continues on where the first third left off. At a half inch in, the chalkiness is now taking on a burning paper note. The retrohale is a musty and chalky cedar. At an inch and a half, the wood has gained a bit of a toast note. The strength in this third bumped up to mild-medium.
Seth: The second third shows a continuation of the sweet spice, honeycomb and cream profile from the first third. There are some baking chocolate and coffee qualities too, but those are much lighter than before. I am picking up some faint stone fruit qualities, and there is this nectarine sweetness on the finish with sugar and Asian spices. Like before, solid medium in strength and body.
John: A quite mild, sweet cedar moves the profile into the second third. Mild bread carries through the retrohale as the second third settles in. As the cigar progresses, some chocolate comes through on the retrohale. At the halfway point, some green vegetal notes take root in the middle of the profile.
Jiunn: The second third has a similar DNA to the first third but not as full in flavor. I still get buttered Hawaiian rolls, ripe cherries, and at this point more baking spices, but everything is toned down. The finish is also more hay driven as compared to cedar. Strength and body remains medium. 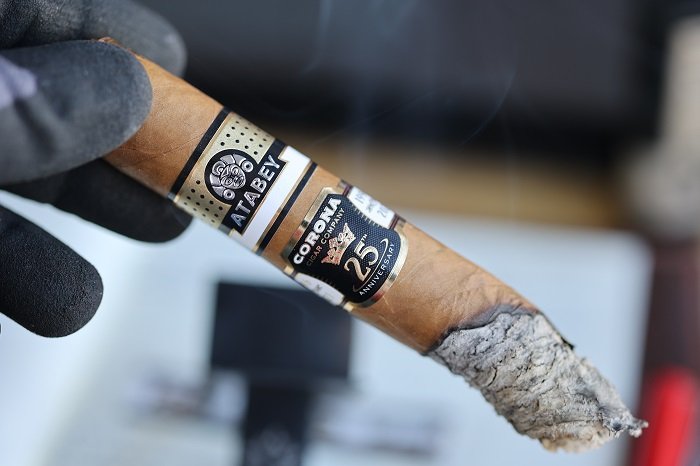 Aaron: As the final third begins, the burning paper note becomes a bit more prominent and is just behind the musty and toasted wood. At a half inch in, some bitterness is becoming present from the burning paper note. The retrohale is now musty and toasted wood. As the cigar wraps up, the burning paper note has lessened and the bitterness went away as the musty and toasted wood remained up front. The strength in this third bumped up to slightly below medium.
Seth: The final third delivers a profile of buttered popcorn, cream, cedar, hay and tobacco. There are some earth and baking chocolate notes as well, and the finish is that of sweet spices. It is still smoking around that medium level, and that goes for body and strength.
John: Sweet cedar and mild hay drive the profile moving into the last third. A mild, tannic cedar develops on the post draw. Some time later, a mild bitterness develops on my tongue through the post draw.
Jiunn: The final thirds flavor profile, while there’s nothing off-putting, does decrease to being average. It has lost all the sweetness and bread characters. It now leaves me with primarily baking spices and cedar. Strength and body finishes the same medium. 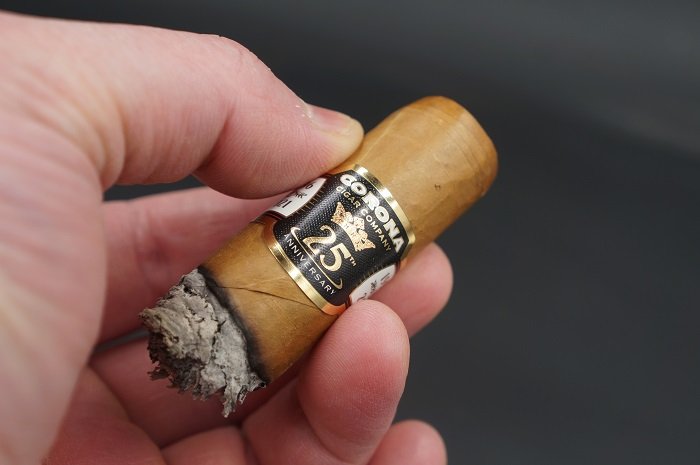 Aaron: The burn went off track once as a crack developed, but the burn line eventually corrected itself with no interaction from me. The ash held on in near two inch increments.
Seth: Burn was amazing from beginning to end.
John: There was some minor uneven burning through the first third, and that continued into the second third, eventually requiring a touch-up.
Jiunn: Burn performance was overall good. The cigar burned unevenly the entire time, which required a couple quick touch-ups. Also, some flowery ashes formed. None of these things hindered the flavor experience. 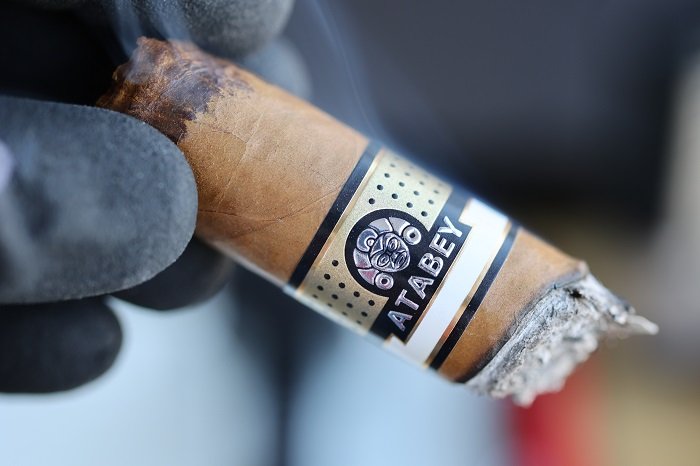 Aaron: The draw was fairly snug, and some additional cuts and a draw tool provided no relief.
Seth: Very good draw. Especially since the cigar was so large.
John: The draw was good, slightly into the resistant spectrum, roughly 2-1/2 to 3 notches.
Jiunn: The draw on the other hand was on point. The best balance between air flow and resistance.

Aaron: This was a fairly underwhelming Atabey. It seems as though the cigar just didn’t carry the same fullness and elegance of flavors that previous releases did. I can see how this cigar fits with Corona Cigar and their clientele and wanting to be very mild, but I think it went a bit too far in that direction. While I’m sure they will sell just fine, I think it’s a miss in regards to the avid smoker and Atabey fan. With the high price point the Atabey Corona Cigar 25th Anniversary commands, along with the experience I had, I don’t see returning to this cigar.
Seth: The Atabey Corona Cigar 25th Anniversary is a good cigar. It is expensive, and a massive cigar in terms of size, but a good cigar. It delivers a core flavor profile that is present throughout; and it is fairly complex at its root. Notes of sweet spices, honeycomb, hay and cedar. Where the transitioning comes into play is when you are seeing changing notes of baking chocolate, stone fruit, coffee and buttered popcorn. I believe the second third is the best part of the cigar, and it is in that third where you get a little bit of everything. It does not smoke like some of the early Atabey offerings that I loved, but it is better than some of the more recent releases that I have tried. It is a good cigar with great construction, but I am disappointed overall when you look at all the factors going into this cigar. On a different note, it would have been cool to see some FSG in this blend. I do not know what it would have done, but that could have been the cherry on top. Maybe another project down the road.
John: The Atabey Corona Cigar 25th Anniversary was in a word; disappointing. If you have a cigar that’s a regular release, at an average price point, having an off experience with a brand can be excused, as they are handmade products. When you stack a premium price point, with a limited or anniversary style release, the room for a failure to deliver becomes razor thin. While the overall flavor profile was pleasant, there is absolutely no way I could justify the premium price point for this cigar based on the experience I had. I’m at a loss as to why the flavor profile was so underwhelming, given that I’ve had so many Atabeys that delivered to the upper end of good to very good. Total smoking time was 2 hours and 26 minutes.
Jiunn: I wouldn’t say this is the Atabey of the good old days of a few years ago. But, I will say it is much better than the last few reviewed ones from the past two years or so. The Atabey Corona Cigar 25th Anniversary, for the vast majority of the time, had a wonderful, full flavor experience that ranged from sweet and pastry like to earthy and spice. I certainly don’t think it’s worth the commanding price point of $34, but I can see myself smoking one here and there on rare special occasions.