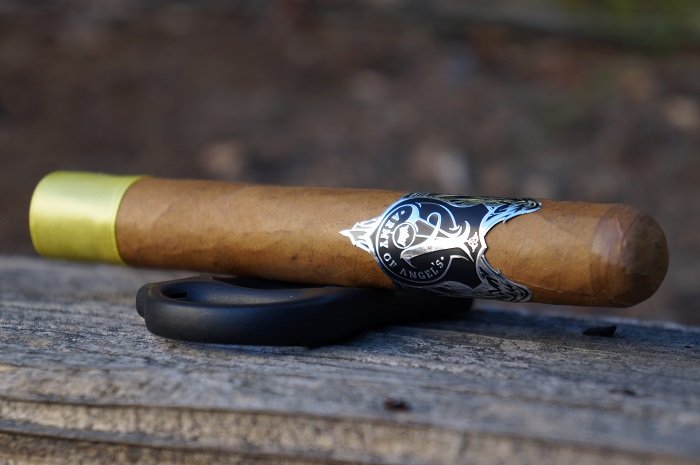 Aaron: The wrapper on the Army of Angel’s Connecticut Toro is medium tan with some lightly raised veins present. The seams are smooth and the caps well applied. There are two bands, with the primary being the traditional black and silver design for the line. The foot band is a yellow ribbon, which denotes the Connecticut version. The aroma from the wrapper is a wood and hay forward barnyard while the foot brings pastry breadiness, cedar and crushed red pepper. The pre-light draw is a light, but velvety hay along with a mid-level spiciness on my lips.
Seth: I hate the footband, but you need it on this Army of Angel’s Connecticut Toro. I just can’t picture an Army of Angel’s from Connecticut without footbands. Great cap. Silky wrapper with a nice light Colorado coloring. Some red with that golden hay Natural color. Aromas of rich hay, earth, tobacco and fruit. Sweet spice notes as well.
John: The Army of Angel’s Connecticut Toro comes in cellophane and does not have a UPC sticker. The cigar has a primary band of silver on black, along with a yellow ribbon foot band. Aromas from the wrapper were bread, sweet yeast, hay and wood. From the foot, I could smell sweet wood, hay and mild mustiness.
Jiunn: The Army of Angel’s Connecticut Toro has an even Colorado Claro wrapper shade. Veins are well pressed, seams tight, bunch and roll even and head well wrapped and capped. Aromas from the wrapper tell of abundant barnyard and hay. Aromas from the foot give spicy cedar, hay and white pepper spice. Cold draw provides cedar wood and dried mushrooms. 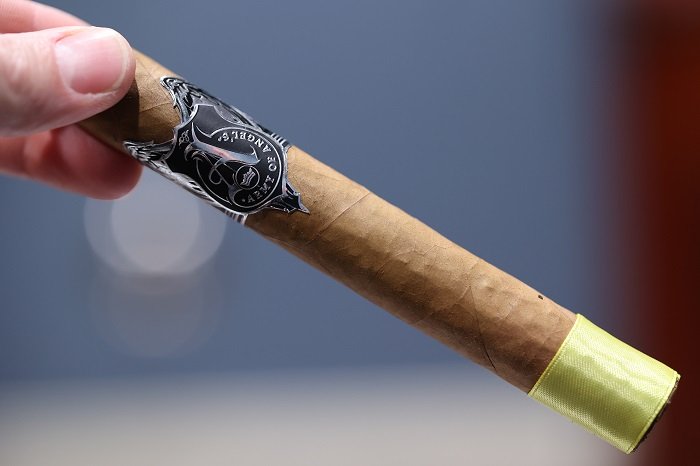 Aaron: The cigar begins with toasted cedar, a creamy mustiness and a good level of black pepper. At a quarter inch in, some light earth joins the profile. At three quarters of an inch in, the black pepper is now very mild while the earth has increased a bit. The retrohale brings toasted cedar, earth, popcorn and light mustiness. At an inch and a half in, I begin getting some orange pith. As the third comes to a close, the profile is toasted cedar up front with earth and creamy mustiness in the middle and black pepper and orange pith in the background. The strength was slightly below medium.
Seth: Soft earth with creamy qualities. Bit of peppery spice as well with nice cedar notes. Hay qualities as well. Medium in strength and body. Strong pepper notes on the finish.
John: The opening puffs delivered sweet wood, hay, medium-plus baking spices and red pepper flake through the retrohale. Lingering wood and medium spices settle into the post draw as it continues. A mild chocolate mixes with the wood on the finish as the first third settles in. The spices start to pull back in intensity to medium, and it sheds some of the bite from the red pepper flake. The entire profile has calmed down to medium-minus in strength just after the 10 minute mark. A creaminess on the retrohale develops, bringing some balance to the spices. Bread also joins the retrohale shortly after.
Jiunn: The first third shows probably one of the most balanced cigars I’ve ever smoked. There’s sweet, savory, spicy notes all melding in great unison. Flavors consist of salted, soft buttery sweet bread, spicy cedar and a hint of barnyard funk. Retrohaling amps up the profile’s spicy cedar. The finish shows softness in dried nuts. Strength and body is medium. 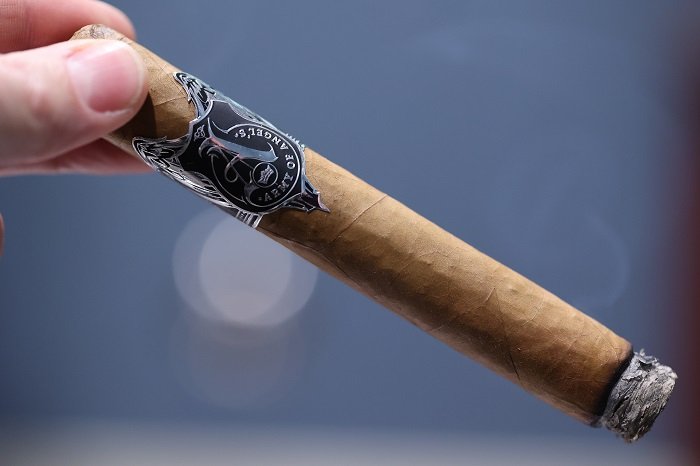 Aaron: As the second third begins, the earth and creamy mustiness are now paired up with the black pepper and orange pith in the background. The retrohale is now just toasted cedar, earth and light mustiness. At an inch in, the earth is now back up to right behind the toasted cedar. As the third comes to a close, the toasted cedar is just ahead of the earth with mustiness, black pepper and orange pith in the background. The strength bumped up to medium.
Seth: The second third is similar to that of the first third. I am picking up some cedar, tobacco, cream and pepper spices. Medium in strength and body. Again, pepper notes on the finish.
John: The second third gets going with bread, wood and creaminess. The baking spices that were so intense in the first third are a background note by this point. Creamy bread and chocolate come through on the retrohale just over the light-plus strength level. Mild grass is present in the center of the retrohale as it moves towards the halfway point. I’m picking up dry accents on the post draw wood as well.
Jiunn: The second third shifts towards more influence in spicy cedar. Although this creates less of a balanced profile, it’s still a very enjoyable profile. Strength and body remains medium. 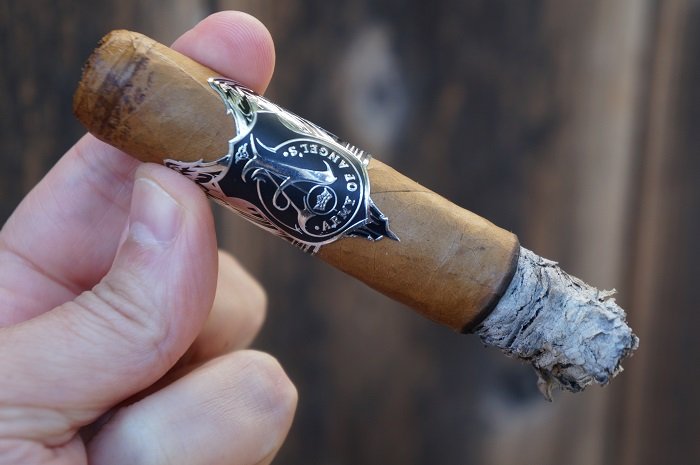 Aaron: As the final third begins, the orange pith has departed. At a half inch in, the earth is now even with the toasted cedar up front. The retrohale is now musty, toasted cedar and earth. As the cigar comes to a close, the toasted cedar and earth are even up front with black pepper and mustiness in the background. The strength remained at medium.
Seth: The final third was right in line with the first and second. I was picking up cedar, tobacco, cream and pepper notes. Medium in strength and body. Again, pepper on the finish.
John: The last third has a flavor combination of creamy wood, mild dry wood in the post draw and some mild spices that start to mix with the wood on the finish. Mild bitterness is detectable at the end of the draw as it continues and there are some tannins as well that linger well into the post draw. The bitterness fades as the last third progresses and the tannins become a background accent note. By the halfway point, hay is solidly in the center of the profile.
Jiunn: The final third continues the trend of spicy cedar and now adds hay. But where this third went wrong was having less of the softer notes from the first two thirds. Strength and body finishes the same medium. 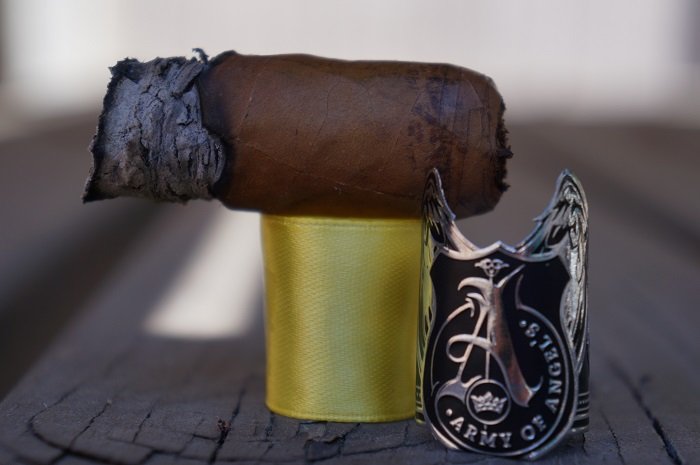 Aaron: The burn was straight throughout, but the cigar did go out once at the start of the final third, requiring a re-light.
Seth: Great burn throughout.
John: The burn was straight through the first third, and second third. The burn became uneven in the last third, eventually requiring a touch-up to correct.
Jiunn: Perfect burn. Even, solid ashes, cool burning temperature and ample smoke production. 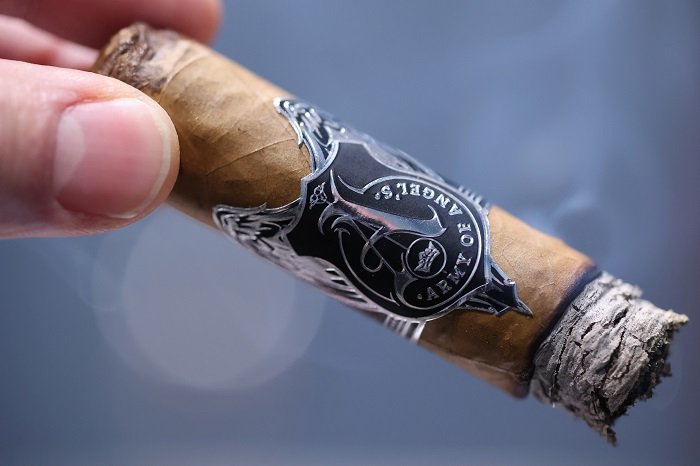 Aaron: The cigar began with toasted cedar, a creamy mustiness and a good level of black pepper. Some light earth joined fairly quickly. Some orange pith joined in the second half. The second third saw the earth increase. The final third saw the orange pith depart. The flavor profile of the Army of Angel’s Connecticut Toro was nice for the first three quarters of an inch, but once the pepper mellowed significantly, it lost it’s appeal and was average the rest of the way. Nothing wrong with the cigar, it just wasn’t all that exciting. It carries a hefty price point, and based on my experience, I don’t see myself coming back to it with any frequency.
Seth: It is not good as the original Army of Angel’s, but this Army of Angel’s Connecticut Toro is a good Connecitcut. Nice flavors throughout. Lots of pepper. Any smoker could smoke this, it’s just a matter of what time of day do they smoke this cigar. Nice construction thoughout. With a lower price, I could see me smoking these from time to time.
John: The Army of Angel’s Connecticut Toro did a great job of marrying some initially intense spice flavors with other nuances of bread, chocolate, hay, creaminess and wood. There were traditional Connecticut elements of bitterness, hay and tannins throughout so I think there’s a lot here to please a wide range of cigar smokers. The burn was nearly perfect with a single touch-up to correct, and the draw was perfect. I would definitely reach for another Army of Angel’s Connecticut Toro again. I think the size is great, and the flavor delivery is good. Total smoking time was 2 hours and 4 minutes.
Jiunn: Sometimes you just have to light up a well blended Connecticut Shade and go back to the roots of what a full flavor, without any of the nonsense of “not your grandpa’s Connecticut shade” is like. When a moment like that calls, look no further than the Army of Angel’s Connecticut Toro. But my goodness, when did Connie shade entrance fee get to $15 a cigar? I’ll stomach it, but it just won’t be my daily smoke at that premium.