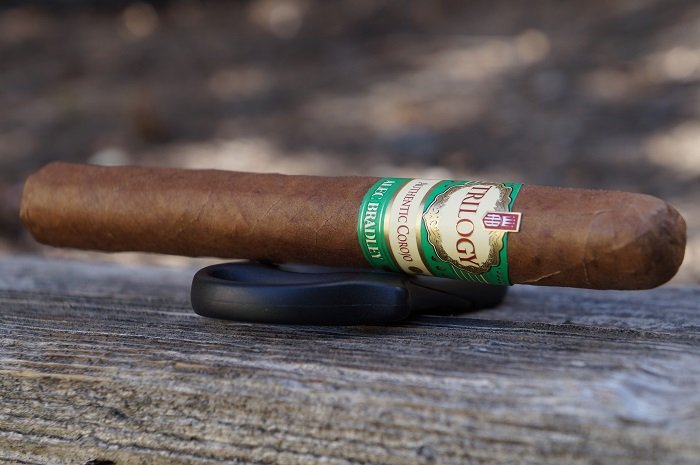 Aaron: The wrapper on the triangle pressed Alec Bradley Trilogy Authentic Corojo is medium brown with some decently raised veins and a fine grittiness. The seams are raised in a few places while the caps are well applied. The band is green, cream, brass and red and denotes the brand, line and sub-line. The aroma from the wrapper is musty cedar while the foot brings a nice anise biscotti note. The pre-light draw brings a musty, aged cedar.
Seth: Well-constructed, the Alec Bradley Trilogy Authentic Corojo is a pretty cigar. Lovely cap and nice coloring overall. A solid Natural in coloring. Veins throughout with some minor tooth. Gritty texture. Aromas of cherries, tobacco, spices, chocolate and rich earth.
John: The Alec Bradley Trilogy Authentic Corojo comes in cellophane with a UPC sticker that has an integrated tear point so it remains intact once the cellophane has been opened. The cigar is single banded, and appears to have a triangle or pyramid pressed shape to it. Aromas off the wrapper included bread and an organic mustiness, light earth and faint hay. From the foot, there was sweet hay and wood.
Jiunn: The Alec Bradley Trilogy Authentic Corojo has a Colorado wrapper color. The feel of the cigar is nice, reminding me of fine grit sandpaper that has a hint of oils though. Veins are well pressed, seams tight, bunch and roll even and head well wrapped. Aromas from the wrapper tell cedar and barnyard. Aromas from the foot give a hit of white pepper spice, tapered cedar and black tea. Cold draws reveal cedar and dried apricots. 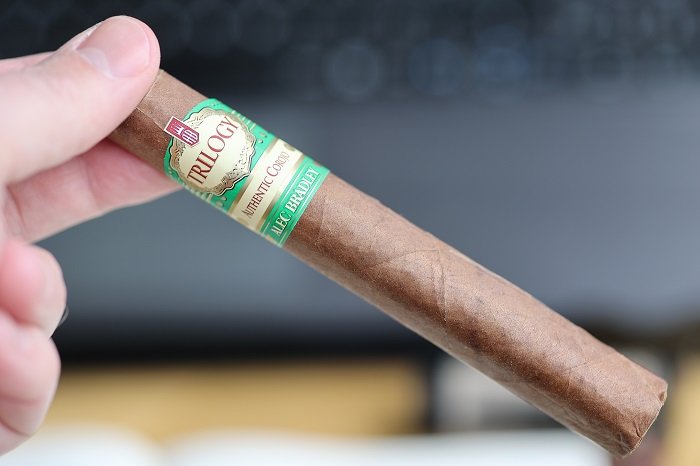 Aaron: The cigar begins with toasted cedar and a creamy, candied cinnamon. At three quarters of an inch in, the fullness of the creamy, candied cinnamon has lightened a bit. The retrohale carries the same flavor profile, but it is a bit fuller, so the cinnamon provides a bit of a zing to the nostrils. At an inch and a half in, a faint dry earth joins the profile. As the third comes to a close, the profile is toasted cedar a bit ahead of the creamy, candied cinnamon with light, dry earth in the background. The strength was right at medium.
Seth: The first third starts out lovely and it is delivering these nutty, leather and woody qualities. Bits of pepper here and there. Creamy as well. Finish of cashews and coffee beans. Medium in strength and body.
John: Sweet bread opens things in the first third as mild wood finishes quickly on the post draw. Some mild mustiness joins through the center of the profile. As the first third continues, post draw red pepper flake develops. That red pepper flake moves up to medium to medium,-plus strength and starts to break into the retrohale. Chocolate is present through the retrohale as the first third approaches the 30 minute mark. By the bottom half, sweetness evolves with some tannic cedar for an interesting combination.
Jiunn: The first third does a good job of touching on some key flavor spectrums. There’s natural sweetness driven by mixed nuts, structured body, providing mild leathery tannins and cedar. Retrohaling introduces a nice hit of black/red pepper spice as well as more leather. The finish is medium in length, showcasing tannins and cedar. Strength and body is medium. 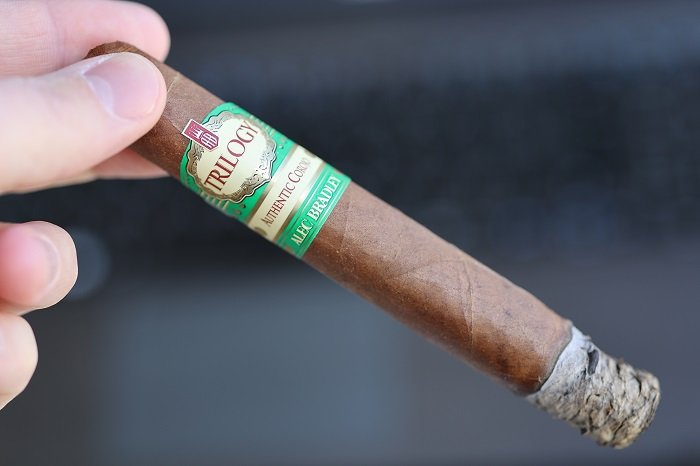 Aaron: As the second third begins, the toasted cedar becomes a bit fuller, becomes a bit dry and gains a light mustiness. At three quarters of an inch, the cinnamon lightens up while the creaminess maintains its level. The retrohale is toasted cedar with creaminess and now a very mild cinnamon without the zing. As the third comes to a close, the profile is lightly musty, toasted cedar up front with creaminess in the middle, cinnamon a bit behind and light dry earth in the background. The strength remained at medium.
Seth: The second third delivers a flavor profile of damp wood with bread notes. Bits of leather, hay and pepper as well. Mineral notes on the finish. Medium in strength and body.
John: A sweet tannic wood leads into the second third, as mild mustiness and medium-minus strength red pepper flake linger into the post draw. Powdered cocoa at light plus on the retrohale as it settles in. The wood takes on some sharpness as it progresses, moving to the front of the draw. The wood recedes after a re-light. There’s an anise quality developing just past the 1 hour 10 minute mark.
Jiunn: The second third shows more leather tannins and cedar, with less mixed nuts, ie less natural sweetness and creaminess. The retrohale is still the same though, as it gives me the spice tones when I want it. Strength and body remains medium. 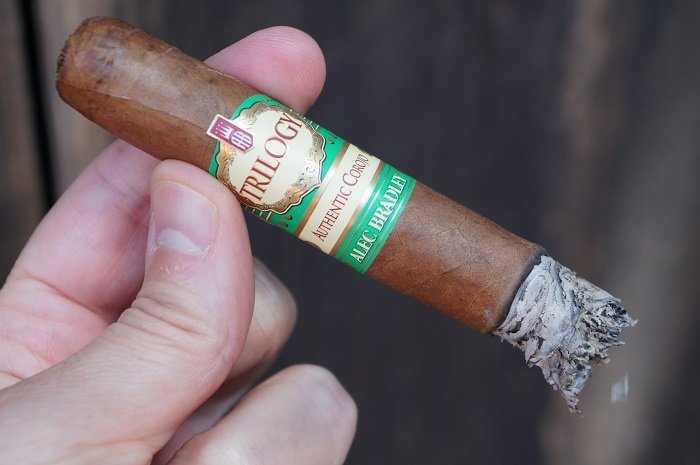 Aaron: As the final third begins, the toast level increases a bit. At a half inch in, the dry earth increases. The retrohale is now toasted cedar with creaminess and very mild cinnamon and dry earth. At an inch in, the cigar warms up a bit and the toast becomes pretty heavy. As the cigar wraps up, the profile is musty, heavily toasted cedar with creaminess and dry earth a bit behind and light cinnamon in the background. The strength bumped up to slightly above medium.
Seth: The final third was in line with the second third. Damp wood, bread, leather and hay qualities. Pepper and cashew/nut flavors as well. Medium in strength and body.
John: The last third is tannic wood forward with mild bread and red pepper flake largely running over the bread. The bread becomes more defined as it progresses. Some time later, mild citrus joins the retrohale.
Jiunn: The final third follows suit with the second third. Main vibe is leather tannins and cedar, with less softness in mixed nuts. The tannins are firm but it’s a shame there isn’t a greater supporting cast. Strength and body finishes the same medium. 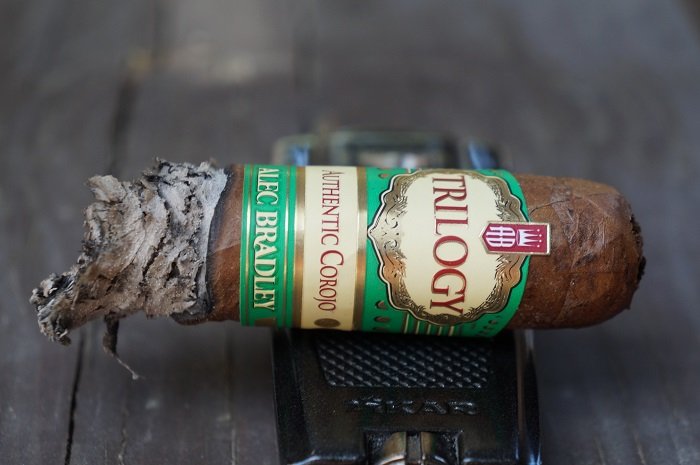 Aaron: The burn was fairly wavy at times, but always self corrected. The cigar did go out once in the final third, requiring a re-light. The ash held on in inch and a half increments.
Seth: Burn was great for the first two thirds, and then I had some canoeing in the final third.
John: The burn was straight through the first, and found it stalling in the second third to which I responded with an increased draw rate. Unfortunately, it went out in the second third, requiring a re-light.
Jiunn: Picture perfect burn performance. Even burn, solid smoke production, tight ashes and cool burning temperature. 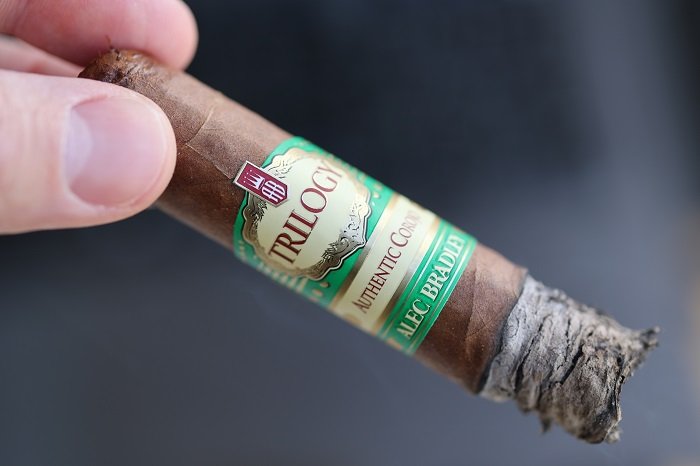 Aaron: The cigar began with toasted cedar and a creamy, candied cinnamon. Some light, dry earth joined a bit later. The second third saw some mustiness join in and the final third saw the toast and dry earth levels increase. The Alec Bradley Trilogy Authentic Corojo started very well as the creamy, candied cinnamon was a great flavor note. The cigar dropped down a level in each subsequent third as that cinnamon note lightened and the toast and dry earth levels increased. This is one of the best cigars I’ve reviewed so far this year. The creamy, candied cinnamon component is fantastic and if that could have somehow held on to it’s fullness, this would have done even better. I’d have no problem coming back to this cigar, and would easily recommend others to give it a try.
Seth: This Alec Bradley Trilogy Authentic Corojo was an enjoyable experience, and a nice offering from Alec Bradley. I don’t think it’s worth $15.00, I don’t think any of the options are, but it is still an enjoyable smoking experience. The flavor profile showed balance with qualities of peppers, nuts, leather and cream. Decent construction throughout. There have been so many fun vitolas introduced to the market since these were initially released, that one could have the debate the size is no longer unique. It’s almost uneventful compared with some of the new cigars released.
John: I’m not afraid to say that when I saw another largely Honduran cigar coming out I was trepidatious. The Alec Bradley Trilogy Authentic Corojo impressed me from the first third and continued the flavor evolution and engagement through the second third. The last third was still pleasant but didn’t quite reach the levels of complexity from the other two thirds. The burn required a re-light and the draw had some resistance to it. Alec Bradley has a clear standout with the Authentic Corojo. Total smoking time was 1 hour and 48 minutes.
Jiunn: This Alec Bradley Trilogy Authentic Corojo almost had the core notes to make it good. The only thing missing was continuity. First third showed great structure in leathery tannins, cedar and enough softness in mixed nuts to not just make it about earth. But unfortunately, the profile broke down starting from the second third to showing too much tannins and wood without help from softer flavors.