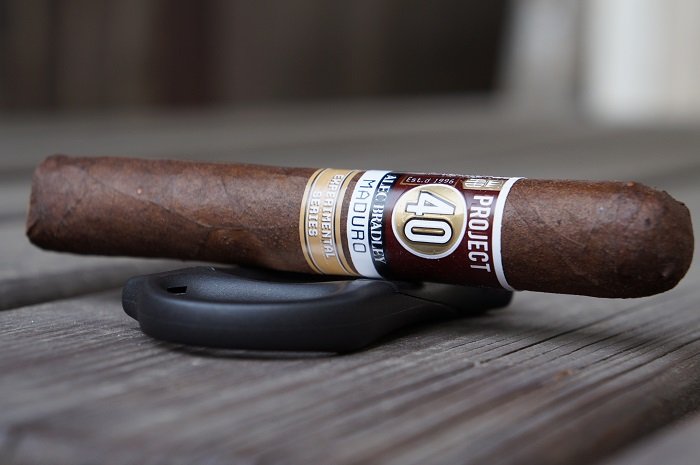 Aaron: The wrapper on the Alec Bradley Project 40 Maduro 5.50 is dark brown with a pretty decent level of tooth. There are a couple of water spots along with a few raised veins. The seams are a bit raised due to the thickness of the wrapper and the head is finished off with a well applied set of caps. The bands are a similar design to the previous release, but on the primary, the main color is burgundy and it denotes Maduro at the bottom. The secondary band denotes Experimental Series. The aroma from the wrapper is a mix of damp earth and cardboard while the foot brings musty cedar and cardboard. The pre-light draw brings an extremely musty cedar note with mild spice on my lips.
Seth: The Alec Bradley Project 40 Maduro 5.50 is firm in hand and sports a wrapper that has veins ranging from small to large in size. Tooth is present throughout and the wrapper is coarse in texture. The coloring is marbled and it is a solid Colorado. It has a great color. The foot has an aroma of chocolate cake, cherries, earth, cedar and raisins, and the wrapper is leathery and woody.
John: The Alec Bradley Project 40 Maduro 5.50 has cellophane, but no sticker with a UPC or identifying the cigar. Initially, I thought the cigar had a singular band that was quite wide, but it turned out it was a well designed combination of a regular band and a thinner secondary band. The cigar has a rustic, toothy wrapper with some lumpiness visible on the cap. There are aromas of English tobacco, aged, musty wood and barnyard. From the foot, there was sweet raisin, hay and wood.
Jiunn: For a budget cigar, the looks of the Alec Bradley Project 40 Maduro 5.50 is far from being budget. The Colorado Maduro wrapper shade has good oil content and traces of fine tooth. Veins are well pressed, seams tight, bunch and roll even and head well wrapped. Nosing the wrapper gives primarily cedar and hay. Aromas from the foot gives assertive white pepper and cedar. Cold draw gives hay and dried nuts. 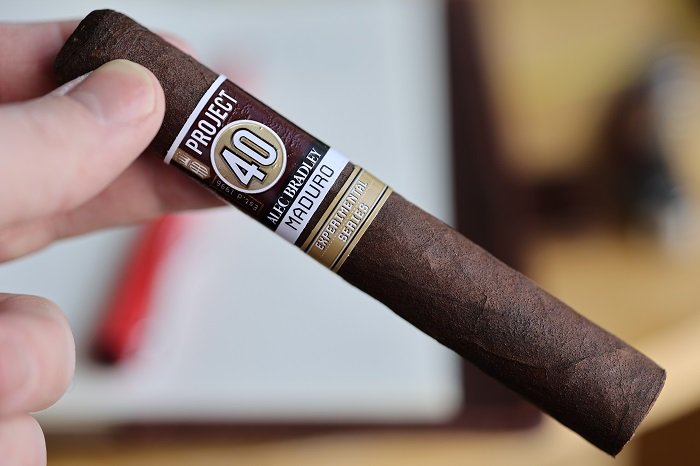 Aaron: The cigar begins with musty cedar, slightly dry earth and faint baking spice. At a half inch in, the dry earth has mellowed and the musty cedar is up front, but smooth. The retrohale is musty cedar and light earth. At an inch in, the earthiness and baking spice are now both faint in the background. The strength in this third was slightly below medium.
Seth: The first third starts out with some chocolate cake notes that are paired with this currant and raisin flavor. I am picking up some sweet spices as well and it has a finish of coffee and cream. Medium to medium-full in strength and body.
John: Powdered cocoa opens the first third, with trailing cedar and mild spices into the post draw. The post draw spices begin building in intensity immediately, and join the retrohale along with some creaminess. There is significant post draw cedar settling on the palate between draws. By the halfway point, the baking spices are at medium strength with creamy cedar to finish. A raisin sweetness comes through by the end of the first third.
Jiunn: The first third opens up with plenty of cedar and dry grass. As the cigar heats through some more, a light cocoa and slight gritty earthiness forms. Retrohaling brings proper red pepper spice and some roasted nuttiness. The finish is pretty short with cedar on the rear palate. Strength and body is medium. 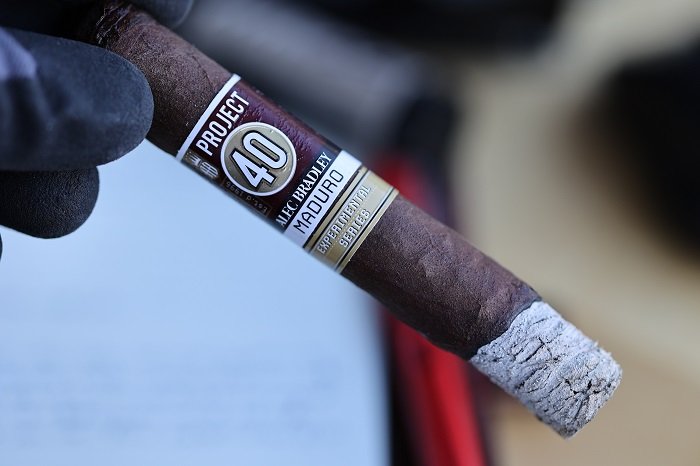 Aaron: As the second third begins, the earth picks up a bit in fullness. At three quarters of an inch in, the dry earth is right behind the musty cedar and there is still a faint baking spice in the background. The retrohale remains musty cedar and light earth. As the third comes to a close, the musty cedar gains a light char. The strength in this third remained at slightly below medium.
Seth: The second third delivers a flavor profile that is fairly similar to that of the first third. I am picking up some nice earth and chocolate cake flavors, and it is paired with some nice sweet pine and stone fruit notes. Medium to medium-full in strength and body.
John: Creamy raisin sweetness moves the cigar into the second third. There is still lingering cedar on the post draw. Light citrus sweetness settles into the middle of the profile. Approaching the halfway point, dryness joins the post draw cedar. Some mustiness comes through in the bottom half.
Jiunn: The second third heavily accents earthiness. Cedar and dry grass is at the forefront, followed by slight gritty dirt earthiness. The finish picks up a slight wood char to the cedar. Strength and body remains medium. 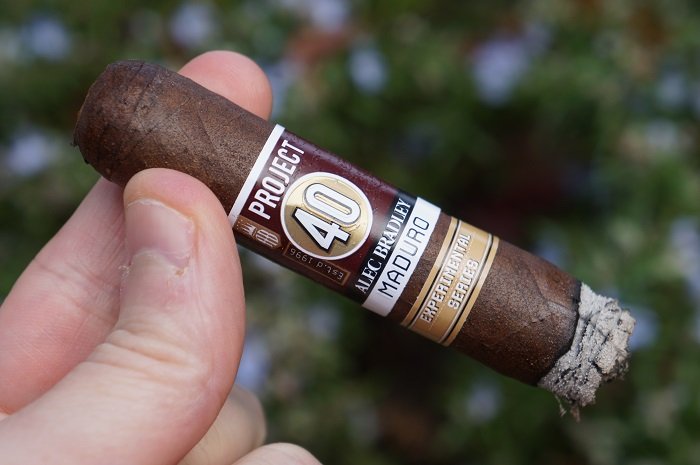 Aaron: The final third continues with the charred and musty cedar with dry earth right behind. The baking spice is no longer detectable. At a half inch in, the char is fairly heavy. The retrohale remains musty cedar and dry earth. The cigar wraps up with the charred and musty cedar along with dry earth. The strength in this third bumped up to medium.
Seth: The final third delivers a stronger flavor profile and I am picking up strong earth, mineral and chocolate cake notes. There are some salt and spice notes present as well, and the finish is that of coffee beans. It is smoking around a medium-full level.
John: Malty sweetness and a dry cedar to finish each draw as the cigar moves into the last third. Creaminess largely defines the retrohale. Mustiness joins the post draw cedar as the last third settles in. A pronounced chocolate comes through in the middle of the profile by the halfway point, but it isn’t enough to keep me engaged through the rest of review experience.
Jiunn: On a weird turn of events, I like the last third. The profile amps up the level of spice, with baking spices and red pepper spice. It also gives a consistent roasted nuttiness. Strength and body finishes the same medium. 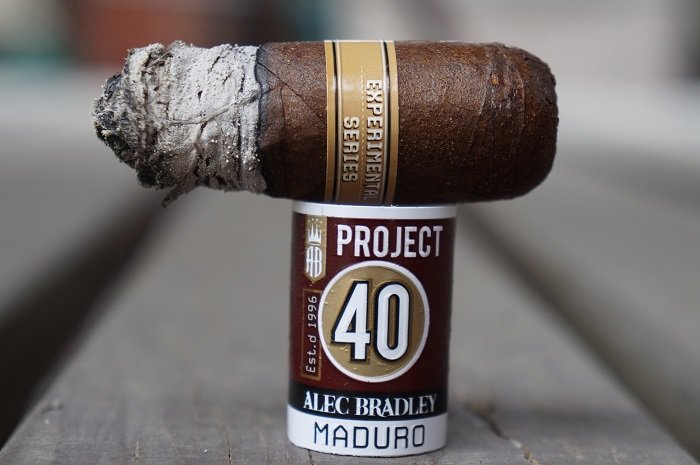 Aaron: The burn was perfect throughout with an ash holding on in inch and a half increments.
Seth: Perfect burn from beginning to end.
John: The burn was relatively straight through the review experience, with a bright white ash.
Jiunn: Burn performance was top notch. Solid ashes, uneven burn at times but never needing a touch-up, cool burning temperate and ample smoke production. 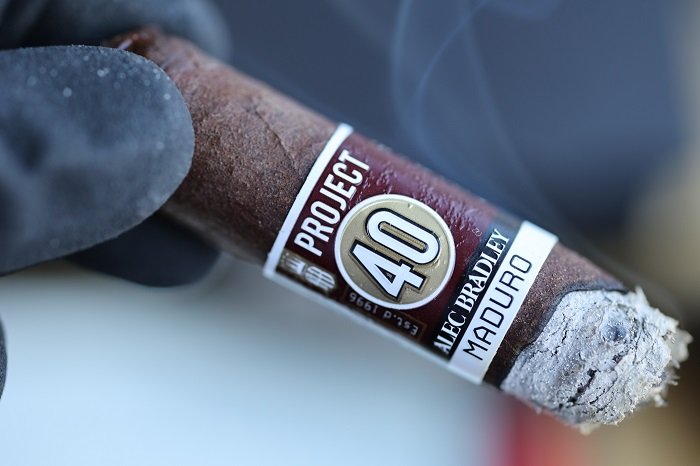 Aaron: The cigar started well and carried a profile much mellower than I was expecting. The second third showed a fairly average flavor profile with the final third dropping down another level as the char built up throughout. The Alec Bradley Project 40 Maduro 5.50 is a pretty well done cigar in a low price point. The final third was a bit of a let down, but even if I just smoked the first two thirds, the price isn’t all that much of a deterrent. I could see coming back to this on occasion and some may find this as a well priced daily smoker.
Seth: The Alec Bradley Project 40 Maduro 5.50 is a solid offering and more memorable to me than the original Project 40. It is a nice and enjoyable blend that is affordable and approachable as well. It is not overly complex, but it delivers a decent profile from start to finish. I don’t see myself holding on to a lot of these, but it is something I would pick up to enjoy depending on the activity. It’s a great beach or hangout cigar.
John: The Alec Bradley Project 40 Maduro 5.50 was a slightly above average flavor experience with amazing burn and a slightly snug draw. The first third was the most engaging with interesting combinations of powdered cocoa, baking spices, creaminess and raisin sweetness. Total smoking time was 1 hour and 53 minutes.
Jiunn: The second rendition of Project 40 proved to be not as good as the first version. I found the Alec Bradley Project 40 Maduro 5.50 to be average, being too focused on earthiness in dry grass, cedar and slightly gritty dirt. It could have used more sweetness and introduced some type of stone fruits, which I find better Mexican San Andres to have. Although average, this is better than most average cigars out there, given the attractive price point. Won’t hesitant to smoke more, but won’t be in a rush to either.